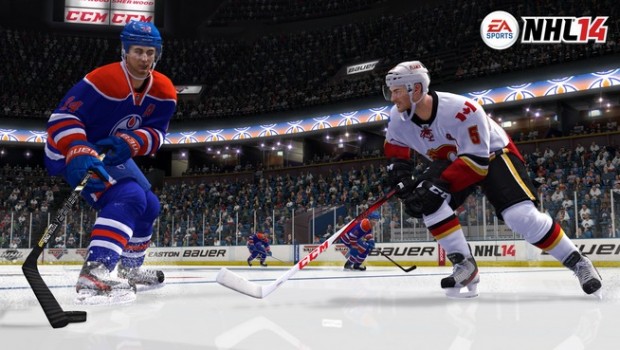 Summary: For a casual fan, NHL 14 offers a good time in its main game modes and hours of additional fun with the NHL 94 anniversary modes. However fans of a realistic hockey experience might be a little let down by the big slide into arcade action and the main game modes offering little upgrade over last years version.

20 years on and NHL 94 is still considered one of the best sporting games of all time, and many consider it to be the definitive representation of ice hockey in video games. Despite numerous graphical improvements, more complex control schemes, colour commentary and a host of detailed play modes, NHL 94 still stands the test of time as a game that is just pure fun to pick up and play. EA Sports appears to recognize this, as not only does their latest version go back to the arcade roots of big hits and big scores, but they even include an NHL 94 anniversary mode, complete with chip tune music and the fixed top down perspective of old.

Before we get into the many features of NHL 94 it is probably best to focus on how the game of hockey plays. NHL 14 offers up 3 game styles, with two of those focusing on arcade style action. In their default settings, both casual and simulation mode are free scoring, hard hitting affairs. Checking has received an upgrade thanks to the new collision detection system. By skating into a player at the right speed and angle, highlight reel hits are performed on a regular basis. Goals are easy to come by, and many games will be high scoring affairs unless you play on hardcore simulation mode. It is a lot of fun to pick up and play, especially if played with a few mates. 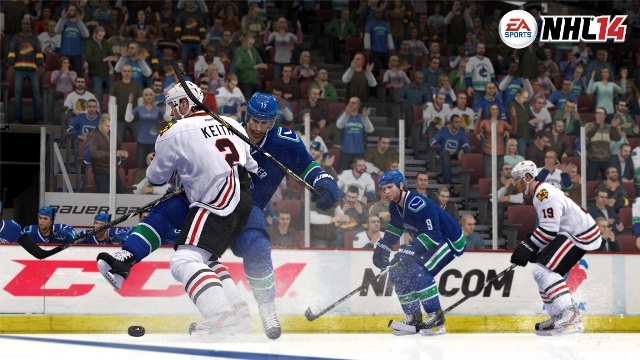 EA Sports also seems to be particularly proud of its new ‘Enforcer Engine’, which is their revamped fighting system. Gone are the first person style battles of the old games, replaced by a system based on their ‘Fight Night’ series. It certainly makes the fighting a little more fun than in previous iterations. Fans of a more realistic simulation of hockey may be a little disappointed by exactly how much EA seems to enjoy their new addition, as fights break out over the most minor indiscretions. Almost every single match will feature four to five different fight sequences. For casual gamers or fans of the arcade style of play, this will no doubt be seen as a large positive. People looking for a more realistic experience will have to go deep into the game menus, where they can adjust the likelihood of fights breaking out.

NHL 14 also offers a significantly revamped ‘Be A Pro’ mode, titled ‘Live the Life’. Here you create a pro and take them from relative obscurity to NHL superstardom. This year adds a number of new features, such as various off-ice events. Your player will grab endorsement deals, give post match interviews and take part in draft Q&As. It all sounds good on paper, which is what makes its lifelessness all the more disappointing. ‘Live the Life’ feels less like a fully developed mode, and more like a framework of what the developers thought the mode should be. Choices are flat, text based affairs, there is none of the usual EA Sports flash to be found and the whole system feels too ‘game-like’. Players have to satisfy four likeability meters based on fans, team mates, management and family but it is far too easy to see which choices influence which meters. The ideas are there for an absorbing game, but the execution is a little too stiff. 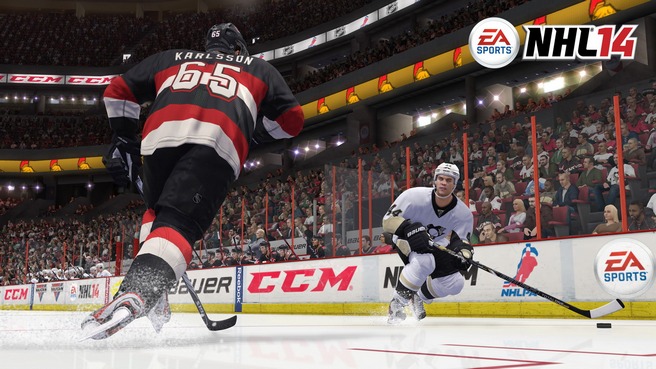 The other big feature is the NHL 94 anniversary mode. NHL 14 celebrates its roots with a slightly more polished version of its 16 bit brethren. Returning are the simplified three button controls, the stars beneath the controlling player, the lack of offside and icing, and delightful chip tune music in the menus. The differences being that the graphics are highly polished, the commentary remains, the rosters are all up to date and the fighting system remains the same. The anniversary mode is a great way to have some quick fun, especially in the multiplayer mode. However, it is more of a cool bonus feature than a real reason to pay full price for the game.

For a casual fan, NHL 14 offers a good time in its main game modes and hours of additional fun with the NHL 94 anniversary modes. However fans of a realistic hockey experience might be a little let down by the big slide into arcade action and the main game modes offering little upgrade over last years version.