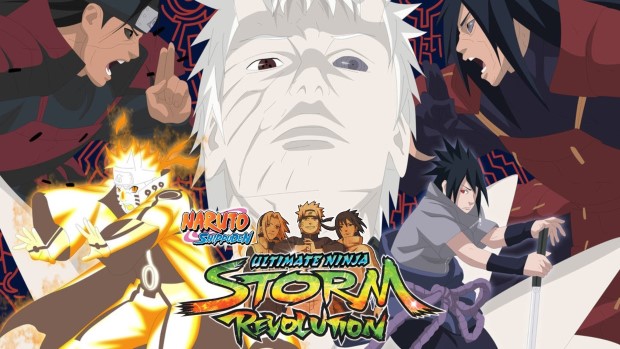 Summary: Well worth a look if you’re a fan of Naruto or alternative takes on the classic beat-em-up formula, Naruto Shippuden: Ultimate Ninja Storm Revolution offers up a refreshingly unique, albeit flawed, gaming experience.

Based upon the wildly successful series Naruto Shippuden, Ultimate Ninja Storm Revolution is the fifth entry in the Ultimate Ninja Storm series and deviates from the standard formula of previous instalments by eschewing following the storyline of the anime and instead offering up five unique playable tales set within the world of Naruto. 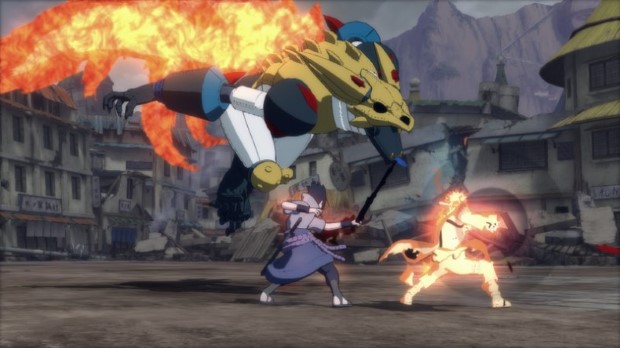 The main story mode is The Ninja World Tournament and the title pretty much sums up the extent of the story as well as the main mechanic – You select your character from an impressively large selection and then fight your way through the different stages of the titular tournament, exploring the island locale upon which the competition is taking place in between bouts.

These free roam sessions have a kind of extremely basic RPG flavour to them as you converse with the locals and other hopeful contenders whilst performing tasks and collecting items; unfortunately these sections are also tediously linear and the environment itself looks rather uninspired, plus the frustratingly archaic use of energy barriers blocking your progress is a particularly annoying addition that all adds up to make these lacklustre sections the worst aspect of the game. 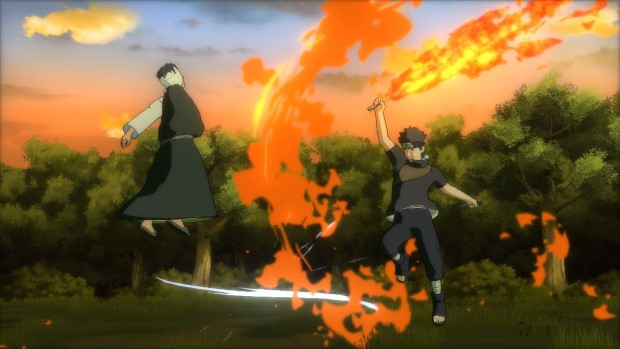 As you progress through the game you’ll recruit allies to assist you in stunningly hyperkinectic, frenzied four player battles where, instead of a life bar, contestants start with a certain number of orbs which can then be removed by using attacks and collected by their opponents, with the victor being decided by the final amount.

After completing the tournament players will unlock a second story mode focusing on Mecha Naruto, basically a robot analogue to the titular hero. The story elements are much more satisfying here and the cohesive structure of the plot allow for progression to feel more rewarding rather than mindlessly assaulting random competitors in an ultimately meaningless tournament, with some epic scale boss battles that really put the player to the test. 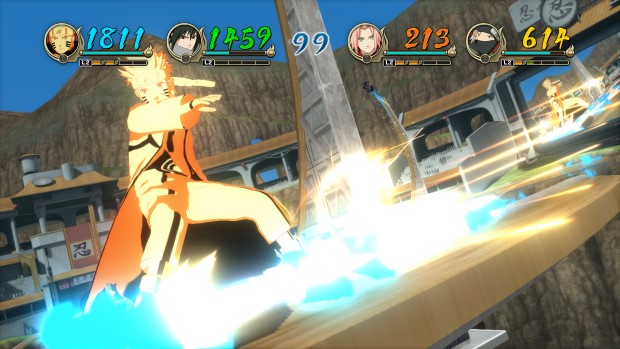 There’s also a free battle option that features a selection of different gameplay modes including survival and the enforcement of certain rules that must be adhered to in different battles, forcing the player to adapt their fighting style, as well as the prerequisite online multiplayer option which will ensure longevity after the many offline modes have been completed.

Finally, Ninja Escapades mode allows gamers to participate in three side stories set in the Naruto universe, with one following the character Shisui Uchiha as he attempts to protect his village from the Hidden Leaf, offering a new perspective on a historic tale familiar to most fans; the story builds upon what we already know about Shisui as well as Itachi and offers insight into the events that led to Itachi becoming the character known to fans of the anime. 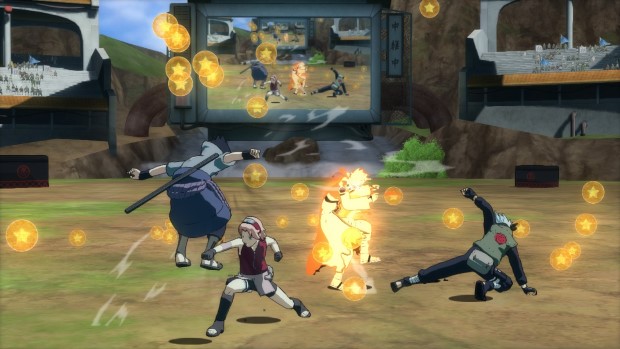 There’s also a tale that focuses on Naruto’s mother and her relationship with Minato students that doesn’t feature any battling at all, instead offering up a short look at the characters, and finally a look at how the nefarious Akatsuki group was formed and how certain members came together to wreak havoc, usually due to desiring revenge for having their butts handed to them in battle.

Each of the story sequences are exquisitely realised by the same production company responsible for the show and the care and effort behind the animation really shows – Fans will be delighted to hear that Ultimate Ninja Storm Revolution offers up almost an hour of new animation. 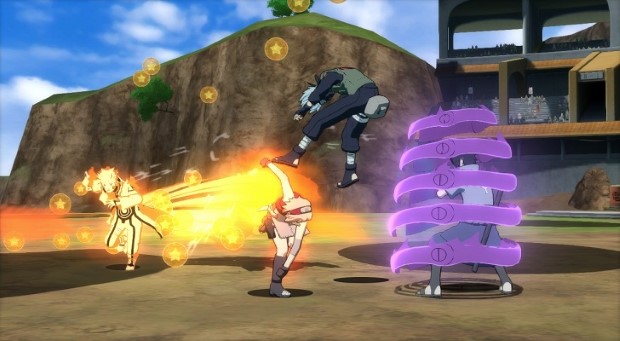 The fighting mechanics are smooth and responsive to controller input, if not a little simplistic initially – As I was getting to grips with the game I found that spamming O generally compensated for lack of skill, particularly as the tournament mode didn’t offer any introduction to the controls.

However, delve a little deeper and you’ll find that each of the 100 characters have their own unique fighting styles and move sets, with the addition of the counter attack move changing the rhythm of battles, stunning your opponent at the cost of leaving you more vulnerable. 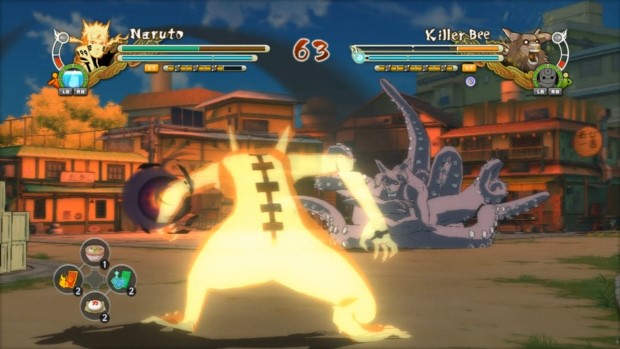 The game also gives you the choice of a battle mode before fighting, with each selection from either Ultimate, Drive or Awakening serving to enhance certain attributes whilst limiting others, bringing in a strategic element to how you approach each fight.

Each fight is a frenetic scramble for the collection of orbs whilst fending off attacks from multiple opponents, so the welcome addition of a charge attack, when you actually manage to pull it off offers players the ability to change the tide of battle with a highly powered move that leaves enemies stunned. 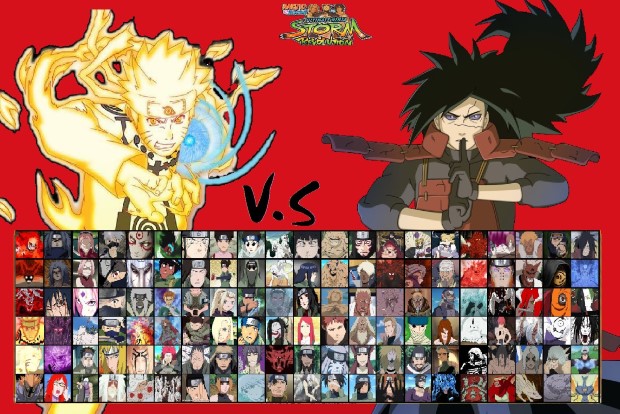 Visually the game looks quite pleasing to the eye, using cel-shaded graphics to accurately capture the aesthetic of the anime series.

The characters are as visually unique and quirky as you’d expect considering the source material and their movements are smooth and elegant; the island environment of the tournament, by comparison, looks bare and sparsely populated, with little imagination going into its design, but it’s the colourful cast of characters that are the main draw here and the game ensures that they look as striking as possible. 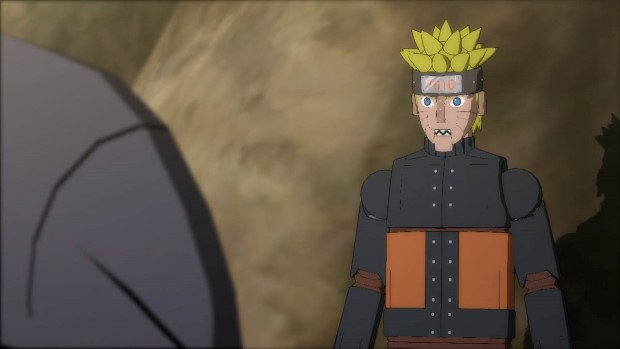 Thankfully the environments showcased in the other game modes are more attractive and are immaculately rendered, albeit offering little opportunity for player interaction. The animated cutscenes are also quite well done and match the quality of an episode of the Naruto Shippuden series.

The audio is well handled for the most part, although volume levels seem to fluctuate randomly between gameplay and the cutscenes. Aside from that there are no complaints and fans will be happy to hear that both the Japanese and English dub casts lend their talents to the game. The soundtrack is decent, if unremarkable and although lacking any real memorable tunes, the music nicely complements the action onscreen. 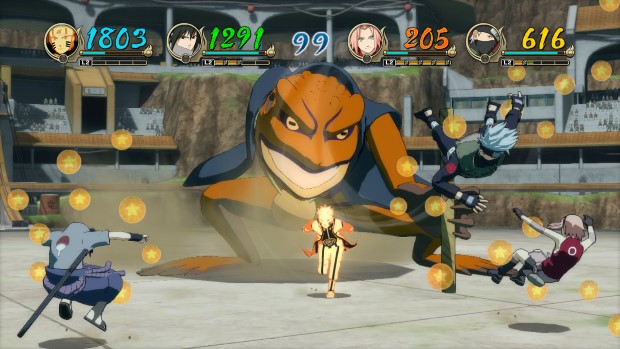 Naruto Shippuden: Ultimate Ninja Storm Revolution will instantly appeal to fans of either the anime series or previous entries in the series, offering players the opportunity to jump into the vividly realised world of the characters and giving a bit of insight into certain characters through the side stories and the Mecha Naruto campaign.

Certain elements simply don’t work the way the developers intended, such as forcing you to choose the battle mode resulting in the removal of access to certain moves, which seems like an capricious way to artificially increase the difficulty, although others may find it refreshing in that it forces players to constantly adapt their play style in order to compensate.

The learning curve is pretty forgiving and the game offers up suitable challenges to experienced players and the replayability level of the multiplayer is high for those who get drawn in to the chaotic combat, even if the single player modes are quickly completed.

Well worth a look if you’re a fan of Naruto or alternative takes on the classic beat-em-up formula, Naruto Shippuden: Ultimate Ninja Storm Revolution offers up a refreshingly unique, albeit flawed, gaming experience that surprised this reviewer with how effortlessly it drew me in, exhibiting an easy pick up and play quality that conversely offers a satisfying challenge to the dedicated. 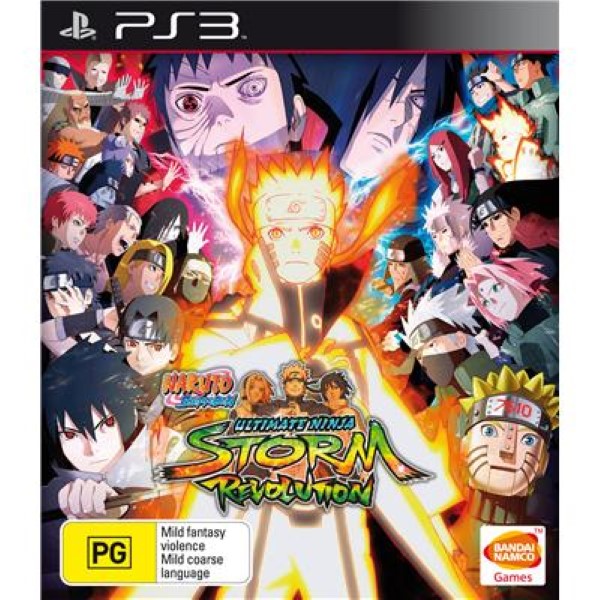