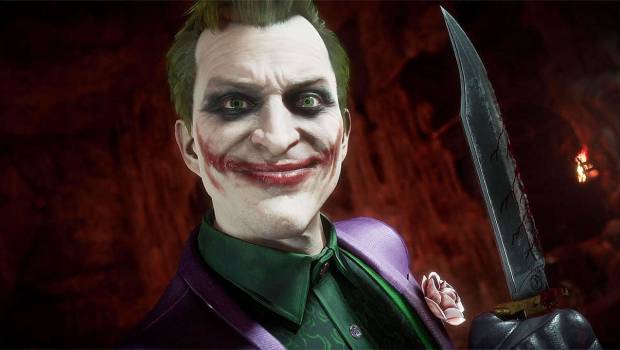 Summary: An excellent addition to an already impressive fighter roster, with plenty of care taken in bringing the Clown Prince of Crime to (ultra-violent) life.

Mortal Kombat 11 is one of the best fighting games this generation (our review) when it comes to its base package and iconic fighter roster. Fans have been spoilt for choice with a steady trickle of new characters, costumes and unlock-able brutalities since the game’s release last year – and The Clown Prince of Crime himself, the Joker, is the latest.

Joker is the penultimate fighter of Mortal Kombat 11’s first Kombat Pack DLC, and follows in the Terminator’s footsteps as the newest addition to represent popular media franchises not directly connected with the MK mythos. Guest characters are a tradition Netherrealm Studios have employed to great effect in the past, and the Joker is no stranger to the series, having been in the rosters of both 2008’s Mortal Kombat vs DC Universe and 2017’s Injustice 2.

Now, I wasn’t exactly clamouring for the Joker as DLC, but The Clown Prince more than fits the bloody and ultra-violent world of MK based on aesthetics alone. He’s a killer clown that thrives on anarchy, possesses an uncanny self-awareness of his insanity and even breaks the fourth wall from time-to-time – a perfect addition to MK 11’s fan-service fighter interactions and equally wacky personalities like the wraith ninja Noob Saibot, soul-stealing sorcerer Shang Tsung and Hollywood actor Johnny Cage. 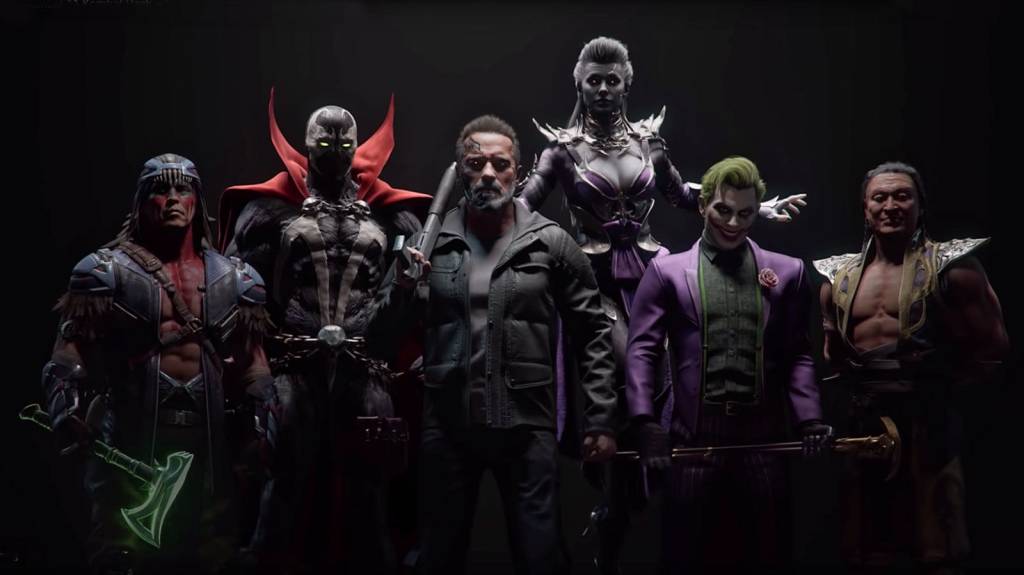 So, is he good? Or just another fan-service fighter to tie-in with the recent Joker 2019 film?

Thankfully, Joker is not just a scary face. His arcade ending and interactions with other fighters faithfully represent the DC supervillain’s intimidating psychotic energy, while his deadly moveset, fatalities and variations ensure he’s a stellar new fighter ready for competitive play.

The Joker in Mortal Kombat 11 is a unique interpretation made for the game. This isn’t Arthur from 2019’s The Joker film, or Heath Ledger’s iconic take on the criminal in 2008’s The Dark Knight. This Joker resembles the green-haired, dapper-suited and deranged criminal clown from the comics and embodies this spirit in both his manic energy and frightening moveset. His bowie knife is traded for a cane that allows for sweeping long-ranged attacks and fast high pokes performed with cartoon-like violence. Meanwhile, his projectiles come in the form of a hand-gun masked as a hand-puppet of Batman which he talks to if you hold the button down to delay your shot and keep your opponents guessing. Joker can also deploy some comically inappropriate jack-in-the-box explosives that can be amplified to make their trajectory more random. If they don’t close the gap, his deadly range will. 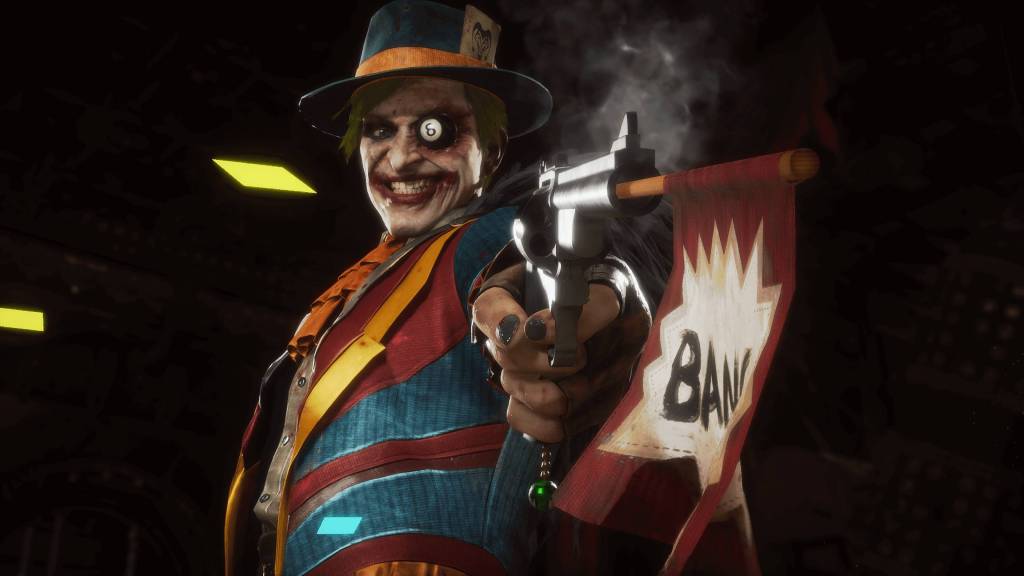 I’m not the best player when it comes to pulling off the more complex combo strings, but thankfully Joker’s got several basics that are easy to execute and flexible to chain together with his strong far-reaching special attacks. His first variation is my personal favourite for out-zoning the opposition with unpredictable projectiles, while his third variation’s unique gas can move ignites the ground for trickle damage; combined with his special spring-loaded boxing glove ‘KAPOW’, which is hilariously fun to use, it’s very high in potential damage output if you can pull it off.

I tried all three variations across training and online play and while his combo starters are quite accessible to a more free-flowing player like myself, especially backed up by his cane’s almost unfair reach over the high and neutral space, it’s clear his third variation is the best for players who want to maximise their combo potential. The absurd range of KAPOW when amplified effectively extends the pain with another launcher, and if you’ve got your opponent in the corner, it’s a bloodbath.

Unfortunately, I didn’t find the skin customisation options for the Joker as varied or interesting as other DLC characters like Shang Tsung. He has several multi-colour suits that make him look the part of dapper mobster, and one bolder costume more reminiscent of the fantastical Mortal Kombat setting. His gear customisation is a little more exciting, with a range of crazy haircuts, hats, masks and eight balls for an eye to make him look crazy as possible, in addition to variations for his cane and jack-in-the-box design. It feels like a missed opportunity here to include more DC Comics-inspired skins, but perhaps the licensing for those was too hard to acquire. Regardless, the Joker’s character and facial model, whatever he’s wearing, are incredibly well-detailed and his uncanny expressions evokes that iconic, unsettling fear only that Glasgow smile is capable of. 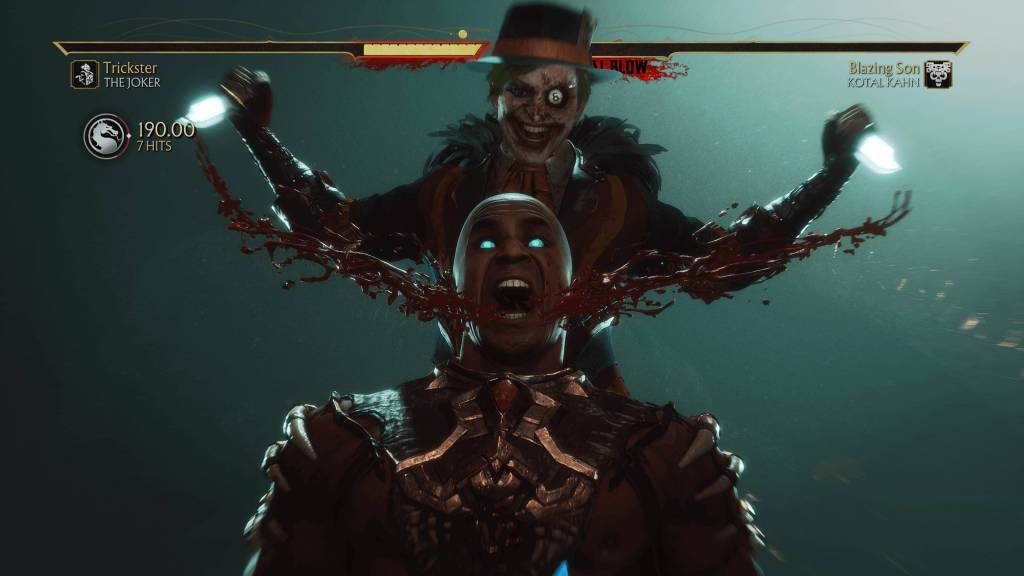 The Joker’s Fatality set is black comedy at its finest. The first is a gory ode to the original Mortal Kombat trilogy’s ‘Friendship’ finishing move, and has the Joker give a cake to his dazed foe while a colourful sign with the aforementioned word hangs above; the loser is blown up, promptly shot against the sign with a tommy gun, and crushed by the Friendship sign. The second Fatality makes use of Joker’s prankster weaponry, and I don’t think I’ll ever look at a jack-in-the-box in the same way ever again. In other words, the gross factor is up there, and it’s clear the developers put in some effort to match the character’s intense unpredictability. Neither can match his Fatal Blow, an excessively savage stabbing with two bowie knives to give his foe a classic Glasgow smile, followed by a bluegoning with his cane – a homage to his murder of a certain beloved comics character – which makes for a great clutch.

As always, voice actor Richard Epcar (who also voices Raiden) dons the role of the Joker again following Injustice: Gods Among Us and Injustice 2 and does a magnificent job bringing the Clown Prince of Crime to life. Epcar’s unsettling delivery is a big reason why many of the pre-match character interactions are so enjoyable to watch. There’s cheeky references to the unfairly maligned Mortal Kombat vs DC Universe during these conversations if you can spot them, and Joker’s Arcade ending even teases a certain fan favourite fighter who matches Joker’s penchant for anarchy – in short, fan-service at its finest. 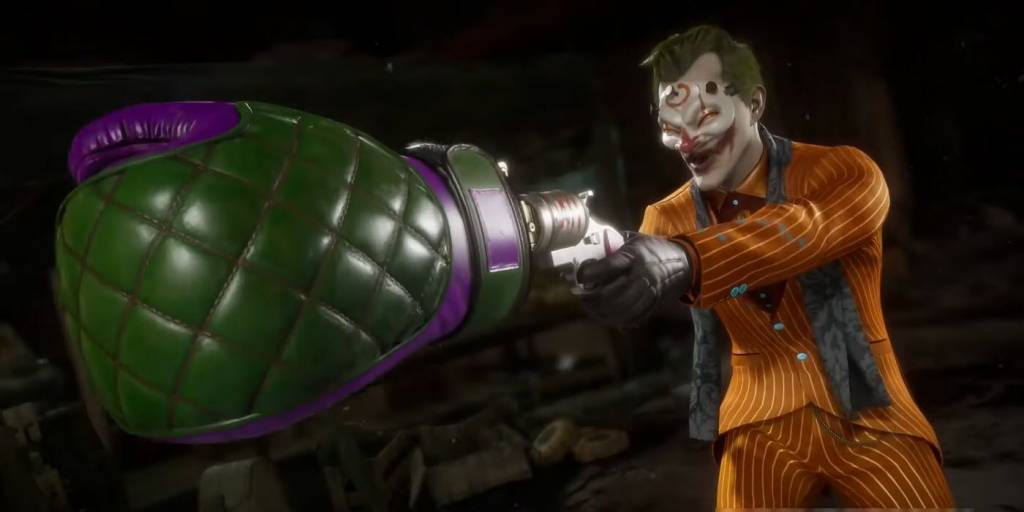 The Joker is an excellent addition to the strong roster of fighters in Mortal Kombat 11 and fully realised in both his look and his moveset. He’s definitely more than just a hurried tie-in for the recently released Joker film, as it’s clear the developer put a lot of effort in depicting the Clown Prince of Crime’s unique brand of mania while providing an entirely new competitive playstyle for both pro players and casual fans – and guys in the middle like myself – to experiment with.

While his current cosmetic customisation options are perhaps a letdown in terms of purposeful callbacks to the films or comics, his three variations are all equally fun to toy with and his moveset incredibly strong to keep up with the top tier of fighters at present. If you’ve been eyeing the Kombat Pack or Joker as standalone DLC, he’s definitely recommended at this point.