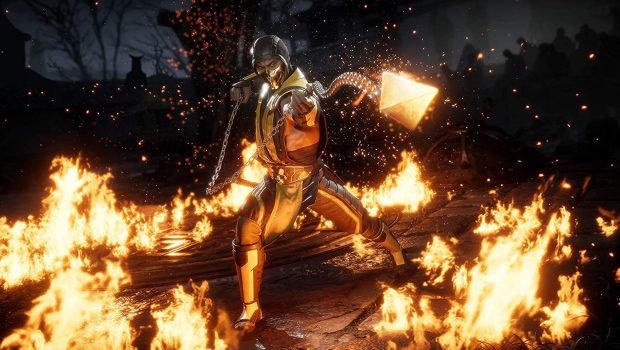 Summary: Must-play for fans and newcomers looking for an in-depth fighting game with shamelessly over-the-top violence, time-travelling shenanigans, and creative ways to beat foes to a bloody pulp.

Growing up in the fighting game renaissance of the 1990s, Mortal Kombat has always been my favourite in the genre for its East-Asian fantasy mythology, unapologetically crazy character designs (ninjas turned robot assassins!) and, of course, its trademark over-the-top, ultra-violent aesthetic.

Since its reboot in 2011, modern MK entries have consistently pushed graphical boundaries, introduced fun gameplay improvements, and expanded upon the once simple tournament backdrop into a universe-spanning, time-travelling gorefest of epic proportions. Seriously, the amount of people invested in Scorpion’s 27-year long quest for closure on the death of his ninja clan has never been higher, and that includes me. Thankfully, MK11 continues to deliver and excel on all fronts and is easily one of the best fighting games released this console generation.

Mortal Kombat 11 is a 2.5D fighting game with a ton of in-depth mechanics and ever-evolving kombat options that place it firmly in the ‘easy to play, difficult to master’ side of the genre. Every fighter feels and plays completely different from each other, and every type of playstyle is well accommodated. Grapplers will love Jax’s brutality, close-combat fanatics will relish Shao Kahn’s sheer strength, and pressure-heavy players will be right at home with Kabal and Jade. Inputting dial-a-combos and regular attack strings require lightning fast input and response time compared to contemporary fighters, but there’s enough beginner-friendly movesets that casuals will enjoy a round or two without intimidation. 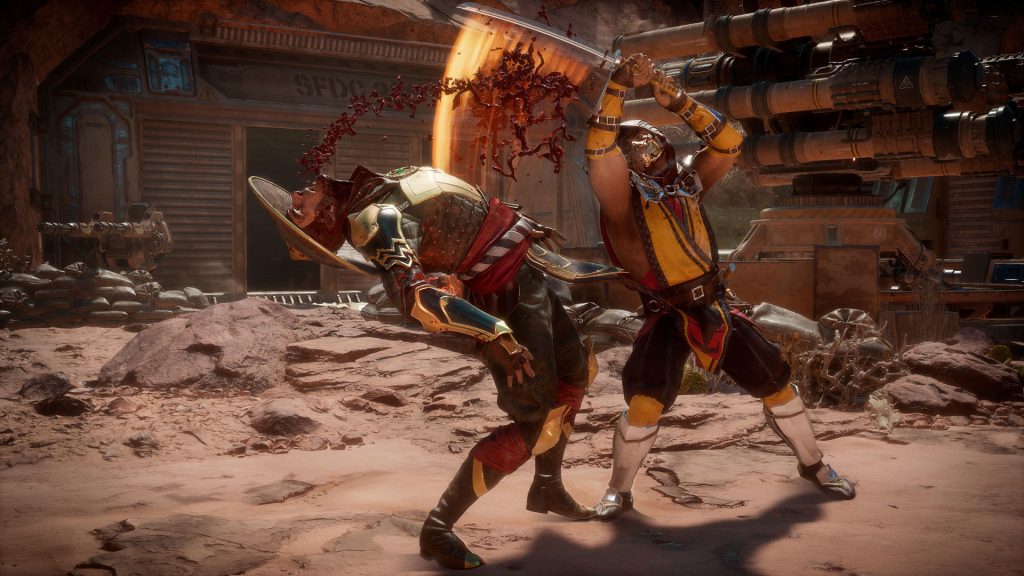 Victory generally favours a good mix of well-timed combo strings and special attacks in MK 11. In addition the variation system and customisable abilities (special attacks such as Liu Kang’s iconic Bicycle Kick), each character has access to their own unique Krushing Blows and Fatal Blows; the former a higher-damage attack triggered with specific timing or combo strings, and the latter a high-risk, high-reward attack (replacing X-Rays) only is available once health drops below 30% – and deals extraordinary damage if it successfully lands. Both attacks have flashy animations and cinematic flair showcasing some serious brutality and add a satisfactory level of tension, mind-games and strategy to each fight; do you delay Fatal Blow to the last second? Has your foe used their Krushing Blow just yet? It’s an ever-entertaining dichotomy, though both can be prevented and punished with precise timing via the new Flawless Block mechanic. Combined with an offensive and defensive meter which amplifies your regular attacks further and lets you escape or dodge an opponent’s onslaught with skill, and there’s a ton of options at your disposal to brutalise foes and come back from a disaster.

Series mainstay mechanics like fatalities and brutalities also return in all of their overly-gory, sickeningly ridiculous glory, with every character possessing at least two of the former and four of the latter, requiring carefully executed button strings to execute at the end of the match. A pleasant surprise is the return of the Mercy mechanic, which hasn’t been around since MK3; if you’re a sadist like me and want to revive your defeated opponent for one last chance, only to ruthlessly beat them down again, you’ll especially love using it in competitive online matches.

However, it’s just not about the flashy moves and tight moment-to-moment fighting gameplay, but the trademark blood and gore style of close-quarters brutality that continues to set Mortal Kombat apart from competitors, for better or worse depending on your view. As Dead or Alive 6 indulges in highlighting the sex-appeal of its roster, every cutscene, battle, setting and moveset in MK11 is packed with all manner of visceral, over-the-top displays of violence; from Sub-Zero’s spine-breaking introduction, or Kabal’s hook swords cruelly mutilating his opponents, or Jade’s longstaff impaling her decapitated foes like a victory flag to be waved proudly, the gritty detail and cinematic flair in depicting these devastating attacks is exactly what parents in the 1990s imagined Mortal Kombat to look like. As a lifelong fan, I’m honestly in awe at the sheer style and effort put into the presentation of fights, but I even I can say MK11 should be avoided if you have a weak stomach for violence, even if it’s in the backdrop of a overly cheesy, fantasy world. 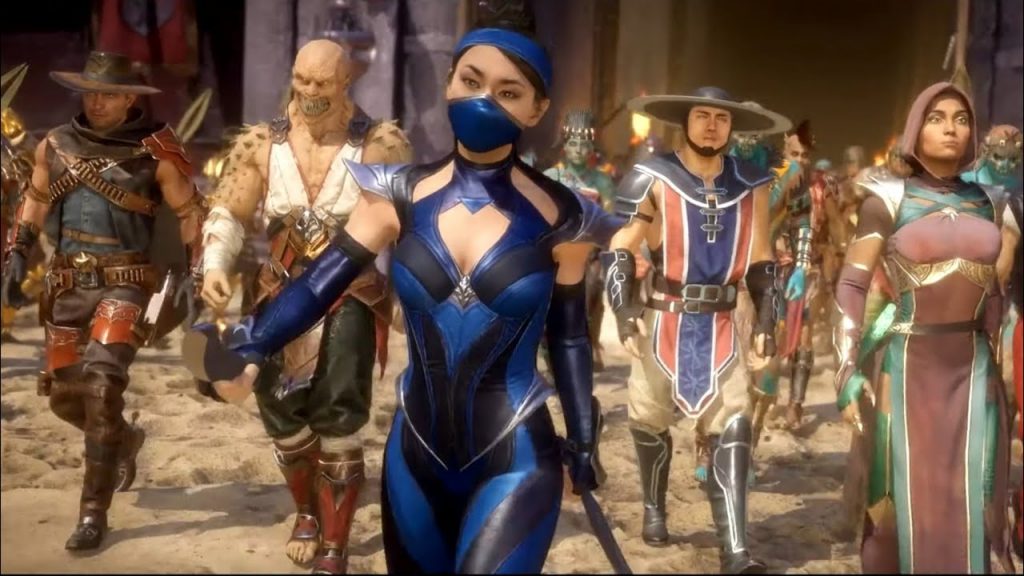 With 11 mainline games, three spin-offs and countless compliations over the past 27 years, Mortal Kombat has plenty of well-established lore and long-standing rivalries to draw from. To say its highly advertised single-player story mode is anything but the video gaming world’s version of Avengers: Endgame would not be a far-off comparison. These are beloved characters, worlds and storylines fans have been lapping up for decades, and any cheesiness derived from NetherRealm Studios’ persistent use of time-travel as a plot device to accommodate the perpetual, guilty-pleasure konflict between fighters (both dead and alive) is forgiven for its sheer quality: MK11’s Story Mode is balls-to-the-wall, filled with fan-service and annihilates every other competitor in terms of the content on offer and its next-gen presentation.

Taking place roughly two years after the story events of Mortal Kombat X, Earthrealm and Outworld are still reluctant allies. NetherRealm, ruled by the bitter undead revenants of past heroes Liu Kang and Kitana, continues to defy both. For lack of a better phrase, thunder god Raiden has gotten sick of all their shit and is using Shinnok’s amulet to turn his powers up to 11 (heh) and invade NetherRealm preemptively, much to the concern of our surviving heroes. The end-result is a pyrrhic victory which gains the attention of the Elder God Kronika, who controls space and time. Raiden’s previous timeline tampering has upset the balance between light and dark, so she creates a new reality which removes this version of Raiden and restores several long-dead fighters, making the past and future collide violently in a renewed power struggle.

No other fighting game released in the past year offers the type of cinematic, compelling single-player experience Mortal Kombat has defined for the past three entries, and as ridiculous as it is seeing undead revenants, honourable ninjas, gruff soldiers and thunder gods battle it out in defense of Earthrealm for the umpteenth time (which can’t seem to catch a break in terms of being invaded over and over again) MK11 offers a thoroughly entertaining, universe-spanning 6-hour story that does most of the iconic roster justice – and puts the lacklustre story modes attempted by other long-standing contemporaries Dead or Alive 6 and Tekken 7 to shame. I can’t begin to convey the absolute joy I felt playing through the perspectives of Liu Kang and Kung Lao again, or the blossoming bromance between once-ninja arch-nemeses Scorpion and Sub-Zero, or the time-travelling family drama of the Cage and Briggs military units. This is fighting game lore and fan-service, however cheesy and contrived, done right and at its best. 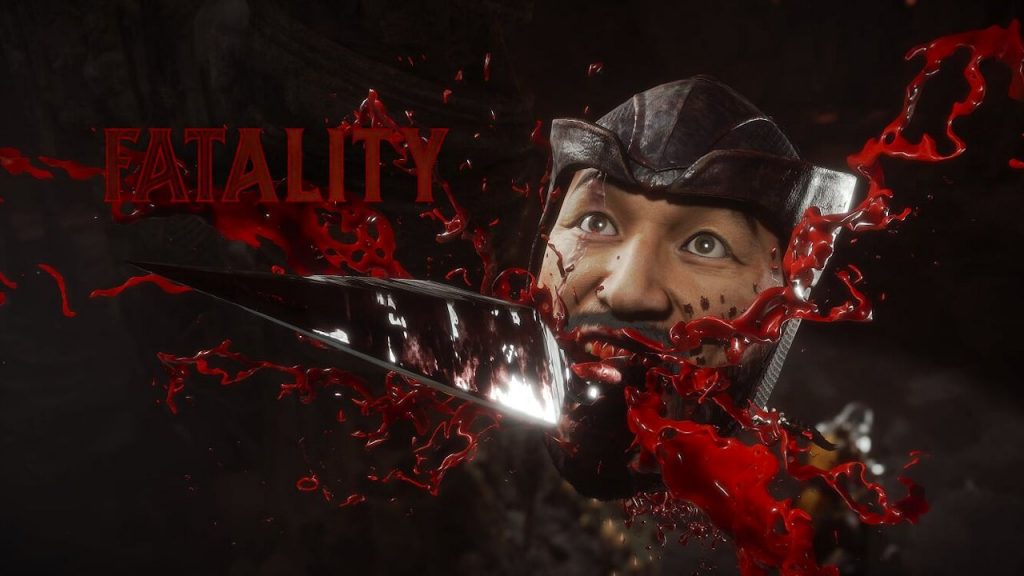 Mortal Kombat 11 boasts 25 playable characters in the base package, mostly representing series veterans and a few returning fan-favourites, all of whom offer incredibly diverse fighting styles that are both familiar to long-time fans but also touched-up with fresh moves, tournament variations new devastating opportunities to beat foes to a pulp. Scorpion, Sub-Zero, Sonya, Johnny, Liu Kang and others are as fun to play as ever, and the three newcomers – Cetrion, Geras and Kollector – seamlessly integrate into the MK mythos; I only wish we had more new fighters to choose from. My favourites so far have been the new twists on returning fighters Jade and Kabal, who play fast, hit hard and have the reach and anti-zoning capability to make most match-ups difficult.

MK11 takes the characters and our control over them a step further with extensive customisation. You can equip a range of cosmetic skins, in addition to stats-based clothing, augments, weapons, their special attacks and even their intros, outros, victory cries, brutalities and fatalities. These elements are unlocked by playing Story Mode, playing through Towers of Time (think Injustice 2’s Multiverse, mixed with MK’s traditional towers) and by opening boxes with in-game currency in the Krypt. The Krypt mode is played this time through in the third-person as an unknown warrior, and is filled with all manner of loot and rewards to find and show off in online modes like Ranked, Kasual and King of the Hill, which to my pleasure, all play smoothly with great netcode, lobby and theatre options, though the competition is fierce than ever – I thoroughly recommend playing MK11’s excellently detailed  tutorial modes to prepare.

While the actual fighting, single-player modes (completing Klassic Tower with every single character continues to offer unique non-canon endings to enjoy) and presentation is excellent, Mortal Kombat 11’s progression system has been clearly designed around a grind-heavy system reminiscent of Injustice 2 – and is my one major gripe with the game. The cosmetic customisation options available are absolutely excellent and I don’t mind sinking time in to earn them, but having to face random rolls of the dice to unlock gameplay elements like fatalities and brutalities – especially with so much filler unlockables like concept art and consumables to wade through – feels far too unnecessary. With many scenarios in Towers of Time next to impossible to complete without consumables to survive the harsh modifiers (seriously, it’s not fun to try and beat an overly buffed up CPU opponent while projectiles stun me at every second), this is perhaps the only part of the base package that disappoints and must be seriously examined before making a purchase. 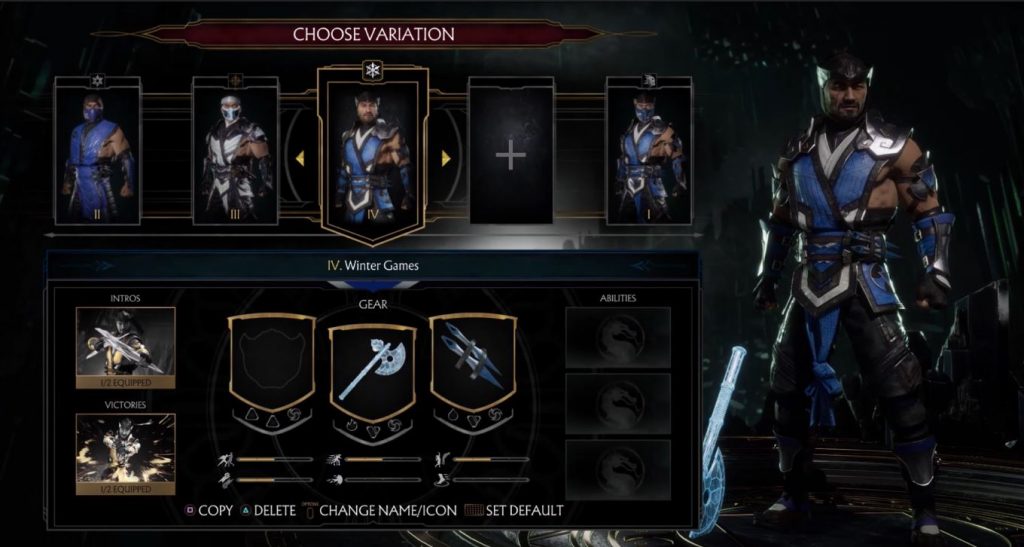 In terms of graphics and sound, MK 11 blows pretty much all recent competitors in the fighting game genre out of the water. They’ve clearly pushed Unreal Engine 3 to the limits here; playing on PlayStation 4 and PlayStation 4 Pro, character models are extremely well-detailed, animations are fast, fluid and life-like (a key criticism of past modern MK titles rectified) and the environments are full of beautiful particle effects and hand-crafted scenery – my personal favourites being the Shirai Ryu Fire Garden and the Tournament stage. Seeing Scorpion and Sub-Zero trade barbs before every match while looking fly-as-heck in their kustomisable duds never looks dull, and the voice-acting performance for every character save Sonya Blade (who Ronda Rousey ruins) is top-notch. Performance-wise, the gameplay itself performs at a solid 60fps, but you’re going to have to jump onto PC to get higher frame-rates during cutscenes and elsewhere.

Mortal Kombat 11 is one of the most fun-to-play fighting games of this console generation, and delivers a high-quality package filled with excellent single-player content, an epic main storyline filled with wonderful fan-service, tons of character customisation and the multiplayer tools and netcode necessary to foster its huge online competitive community for years to come.

While its grind-heavy progression systems is overly excessive and its promotion of certain microtransactions (such as Frost, a free in-game unlockable character on the store for $8) questionable, there’s no denying the gameplay, presentation and content on offer is superb.