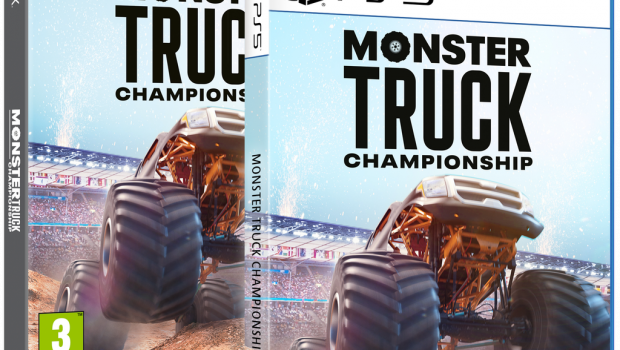 Summary: A subtle upgrade over its last gen version, Monster Truck Championship is a unique but somewhat flawed racing title. Great use of the PS5 controller, however.

Teyon brings its 2020 monster struck simulation to next-gen consoles, with some slight performance boosts inherent. Is it worth the price of re-admission? If it’s your first foray into the Monster Truck Championship…maybe. A repeat driver, likely not.

As a bit of a disclaimer – and as someone new to the title – I am a little more critical than my predecessor, Jeremy, who reviewed the PS4 version back in October.

I’ll start with what’s new…then what returns. The new part is mainly the graphics and performance upgrade, now at 4K and 60FPS, respectively. While Monster Truck Championship for the PS5 looks pretty good, it doesn’t truly showcase the console by a long shot. There’s solid flying dirt and mud graphics, but the rest of its presentation is literally pretty flat. Tracks and environments are too similar also not engaging, with cockpits, spectators and background elements mainly blah and non-interactive. Announcers, sound effects and fireworks/lights are passable. Like most PS5 titles, load times are thankfully almost non-existent. That’s a win, right?

Related and while the Unreal engine has its benefits for physics purposes, it continues to have an almost ‘peel’ like feel when damage occurs. As in, truck parts appear to peel off versus break, crush and/or fall. The same can be said when crushing cars that more so disappear than lie on the wrong end of giant whirring tires. 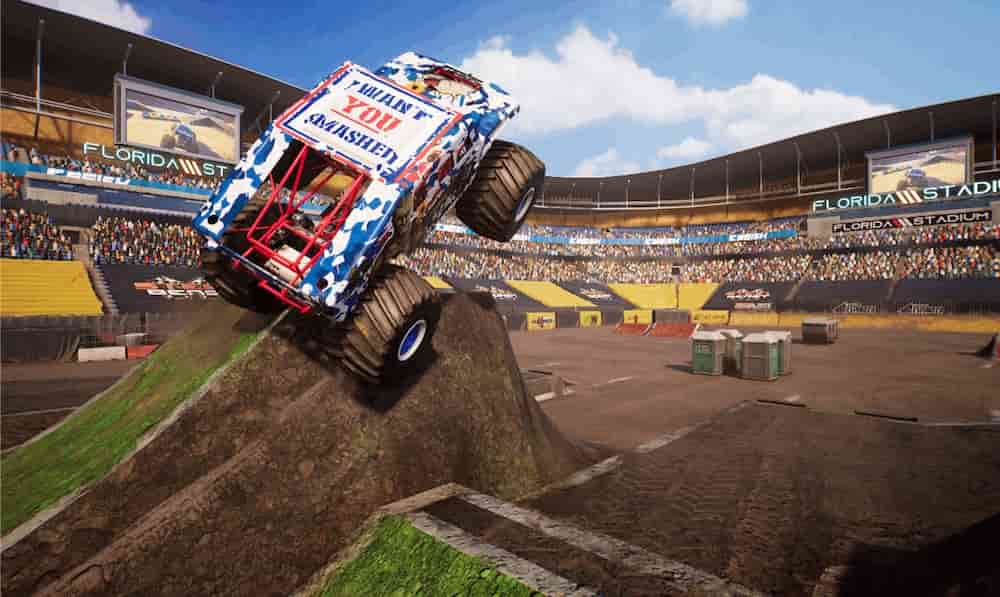 On the physics front, be warned: Monster Truck Championship claims to be a simulator…and truly is one. The slightest miscue via competing truck or environment interaction will send a truck careening in an unwanted direction or even upside down (requiring restart). Similarly, engine RPM and tire direction (especially once independent real wheel drive factored in) are very finicky, and react very specifically to different road elements (i.e. sand, mud or standard asphalt). Thus, Monster Truck Championship is not about revving it up, rather delicate presses on the pedal combined with slightest angle adjustments. Thankfully, the amazing triggers and analog sticks of the PS5 controller are up for this challenge. It’s a match made in heaven, honestly.

While it has its hiccups, I truly enjoyed the hard as nails, sim feel to Monster Truck Championship. After several hours in, immersion takes over. Driving monster trucks is very different than standard racing titles…in many ways for the better. All of the game’s modes (traditional race, destruction, drag racing) reinforce these differences in how best to win them. A highlight of Monster Truck Championship is – even with the above and omnipresent finicky nature – the game’s physics never cheat either for or against you.

A serious criticism, however, lies in Monster Truck Championship’s progression system. It takes far too much grind before trucks can be leveled up with parts. This means trudging through several hours and dozens of races via the base and terribly configured monster truck, where any misstep (as they possess poor steering and acceleration) kills any chance of winning a race and getting needed parts upgrades. These upgrades are also tied to sponsor provided goals, where some of the required tasks aren’t properly recorded when executed nor aligned with the races at one’s disposal. Monster Truck Championship compensates a bit for the grind by allowing endless event restarts sans penalty, a must to ultimately win a race series and reach needed goals. But even with this allowance, there really are only three true race types and so many of the venues look and feel alike. Variety is most evident in freestyle, where opening start position literally points a truck toward executing an awesome and points producing first series of tricks. Also, select tracks feature the exciting over/under, figure 8 layout where trucks whizz right by and past each other. 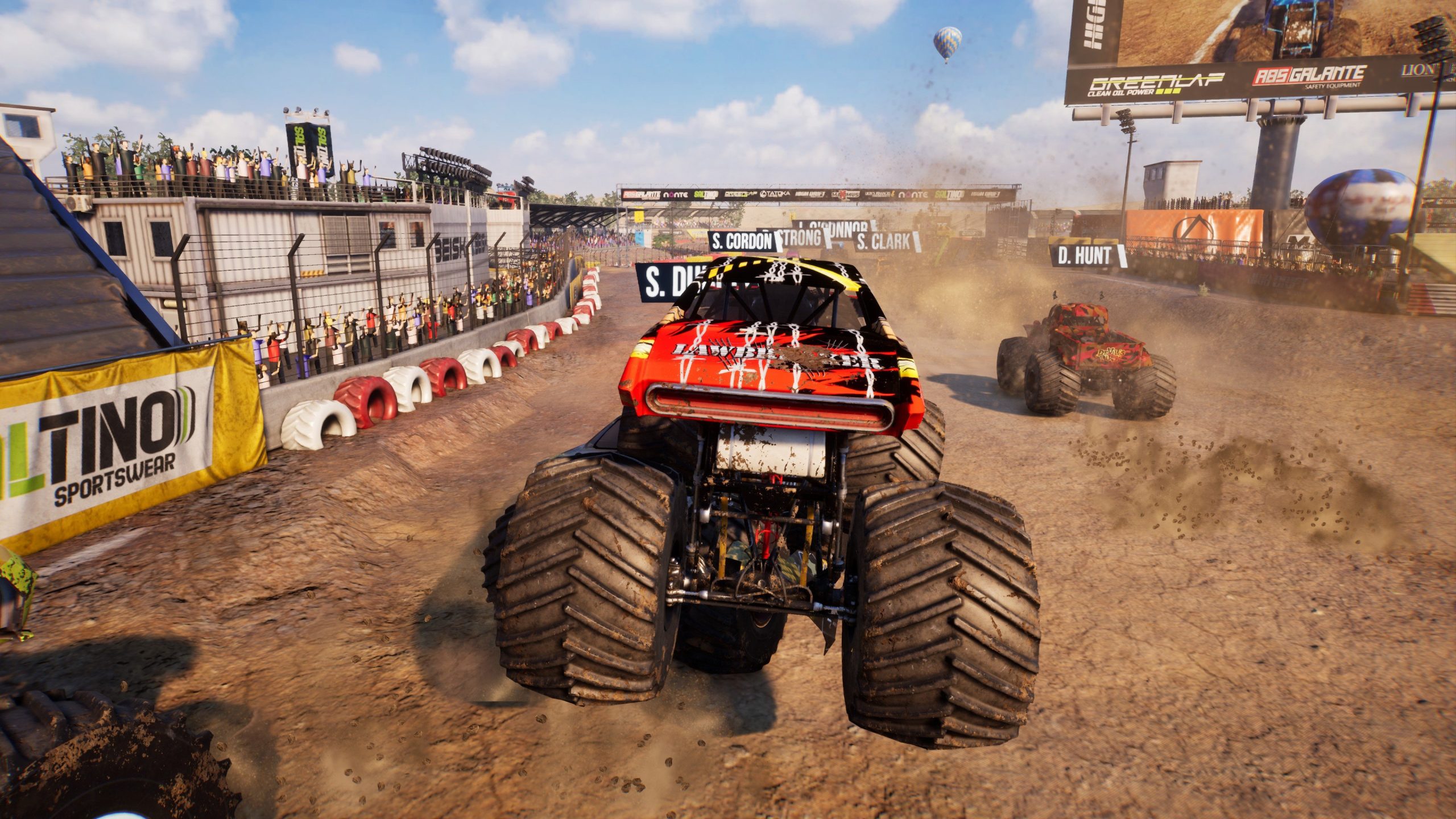 Another core part of Monster Truck Championship is in the hiring of teammates with varying player boosts/benefits. Early on, these legs up can compensate for the terrible truck features, also provide a nice boost at mid-level and above circuits. They do not, however, come cheap.

Speaking of cost, far too many upgrades come via expensive frames or decals. While the customization is nice, they are significantly overpriced. They likewise point to a glaring lack of licensed vehicles, the main allure of monster trucks, period. This places emphasis more on your individual driver than truly building and customizing a really unique tool of vehicular destruction. It would be a lot cooler to create a vehicle persona, in tandem.

I’m also quite surprised by Teyon’s decision to not incorporate skill bonuses (via dollars or otherwise) by executing specific moves during traditional or drag races. The tutorial does a sound job of explaining how to pull of tricks, but Monster Truck Championship only rewards these tricks during freestyle destruction (where chaining them provides most value). This feature (to continuously reward skillful driving) is a stalwart of racing titles, but surprisingly not this one.

All in all, Monster Truck Championship for the PS5 is pretty much the PS4 version with some slight visual upgrades. It’s a unique title in a world of traditional racers, but has some serious progression and variety shortcomings that reduce its replayability. It does, however, play pretty well albeit unforgivingly, with a solid if not pretty physics engine.