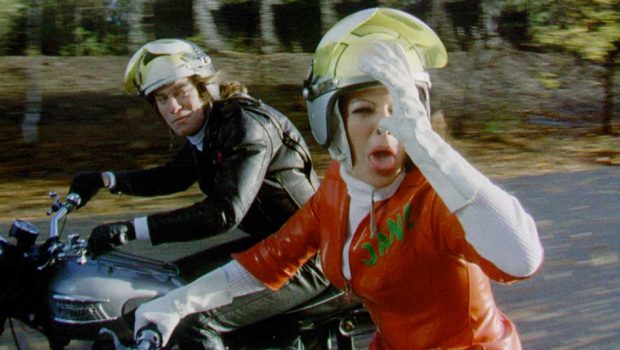 Summary: A fun ride and well worth your time as well as something to watch with friends.

Teenage outlaw motorcycle gang The Living Dead returns from the dead when its leader finds the secret to eternal life after pestering his mother for many years. It seems she made a deal with “a higher power” that included her son and now nothing can stop him and the gang in their rein of terror across the land.

Although this was made really cheaply and intended to shock, it does have some good talent in it such as George Sanders and Beryl Reid. Nicky Henson originally only agreed to be in it as he thought no one would see it. He got quite a surprised being interviewed about it 40 years later. The Arrow Blu-ray is meant to be quite good in terms of special features.

It was trying to break away from the more formulaic Hammer Horror type productions and almost gets there but in some ways it seems quite old fashioned. They do show some of the violence on screen but there are others where they just show the aftermath of it. There are hundred year-old frogs, graveyards, suicide cults, stone circles and other such horror elements but they are used differently than you would expect.

The motorbikes and stunt riding seems to hold up quite well and some of it looks like they just shot it on normal roads without bothering to close it. The stunts look a lot more dangerous than ones these days as they are quite close to the cars in some scenes. Not sure exactly what type of motorbikes they are using but they seem to take a lot of punishment and keep running.

This was a few years before Mad Max and just before Stone but I am not sure if this movie even came out in Australia as I had not heard of it until a few years back. It wasn’t quite a lost movie but the only surviving copies of the print were not in a good shape from what I heard.

For something that was made so fast and cheap it comes together quite well and supposedly it did well with its intended audience. There was originally meant to be a 35mm screening of this film at MIFF with Lair of the White Worm and a documentary on the same program but it had to be cancelled.

I would recommend this one to fans of horror who want something different and also for people who don’t like “scary” horror as there are none of the usual cheap tricks like jump scares that make people not like them as much. It is a very strange movie and would suit fans of other cult and alternative cinema.

A fun ride and well worth your time as well as something to watch with friends.