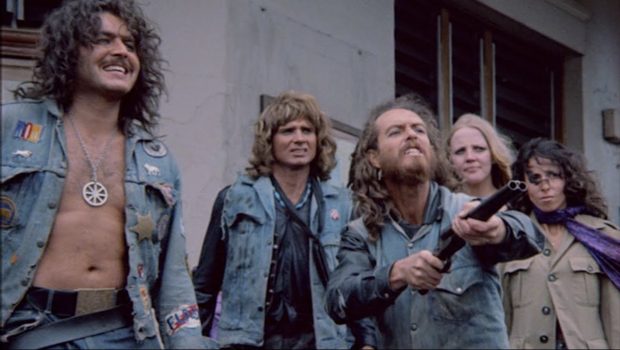 Summary: Very 1970s but also uniquely Australian in a way a lot of movies these days aren't well worth a watch especially in this version.

When a member of bikie gang the Grave Diggers sees the gunman of a political assassination, they end up getting targeted one by one until the police send in Stone (Ken Shorter) as their protector and to find out who is after them.

The gang’s leader the Undertaker (Sandy Harbutt) is against it, but a vote of the members agrees to take him in. He proves himself by racing one of the members and they initiate him into the gang, but where do is real allegiances lie?

This a well-known movie so it is difficult to say much more about it that hasn’t already been said. It was released later overseas on the back of the success of Mad Max and did have several of the same cast and even some similarities in the events in the story. I had to listen again when one of the characters was called “Bad Max”, it would have been so easy to redub that line but I am happy they did not.

I first saw this movie on SBS TV in Australia back when they still had the Saturday night cult movie and also it came up in the Not Quite Hollywood documentary. I went to the panel discussion for Not Quite Hollywood that had Sandy Harbutt and Roger Ward on it. Roger Ward had a lot of fun on the movie but also caused trouble with the actual bikies due to yelling things out (I won’t repeat what he said) and starting fights.

It is a very 1970s era movie with lots of long hair, swearing, violence and nudity although it does still feel like an Australian story that you do not get as much these days with these sorts of stories. For some reason it is still rated R for the Australian release due to drug use and violence.

The bluray is a 4K scan of the original film elements and is the director’s cut of the movie. The bluray disc also includes many extended interviews and even the entire “Stone Forever” documentary making this the definitive release. The soundtrack on a different disc but what you get out of that depends on if you enjoyed the music in the movie.

If you are a fan of the Ozploitation genre then you would have seen this already or at least known about it. I would recommend this movie if you are a fan of films about gangs and crime dramas. There is not really an equivalent for gang movies in Australia that are popular in genre circles.