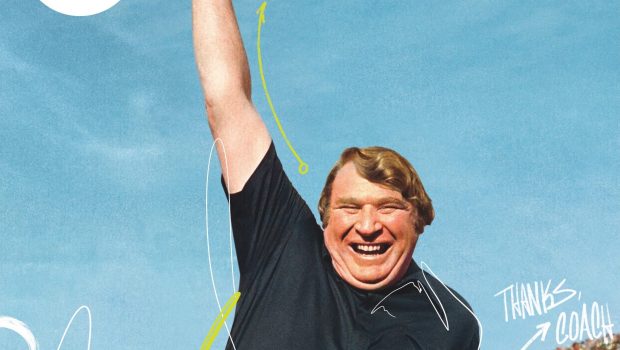 Summary: A minimal improvement from years prior, Madden 23 adds an homage and some new wrinkles...but none significantly advance the series.

More of the Same

Whatever one’s ultimate opinion is of Madden 23, Electronic Arts certainly tried something a little different to get it there. Intent versus execution, however, are two totally different things. Thus, the ball moves a little more definitely toward the red zone versus Madden 22, but – akin to so many previous iterations of Madden – the drive ends up settling for a 30-yard field goal.

The greatest overt selling point of Madden 23 is a fleeting emphasis on its cover star, the late great Hall of Fame coach (John Madden) of which the American football series inspired and advised by for decades. Madden 23 opens with an old versus young (coach) Madden, historical greats All-Madden Team battle complete with signature Madden quotes (on stadium scoreboards), pro-Madden crowd chants, announcer homages to Madden’s on field and video game legacy, and a detailed half time show honoring said coach’s colored journey. Madden coach models in this battle are eerily good, and the celebration of John Madden’s life well done (if too short).

Strangely…that’s when the Madden branding/homage begins and ends in Madden 23. No other mode leans heavily if at all on recognizing its namesake, a glaring omission when so much more could and arguably should be done following Madden’s recent death. For example, having Madden as an option on commentary, a coach in Franchise mode, studio/halftime guest, a playable player in Ultimate Team…? Nope, nope, nope, and nope.

Within the game, Madden 23’s shiniest new toy is ‘FieldSENSE,’ an advertised upgrade to core AI decision making also physics-based movements and physical interactions. During gameplay, this upgrade is there…but not significant. I did see a cool broken tackle and some better defensive line tackle mechanics (versus prior blind defensive swarm and running into butts of dumb blockers). There’s now also a 360-degree spin feature surprisingly easy to enact, although not really effective. Related and in Madden 23, sprint is better utilized in pockets than just open field getaways. Ergo, it’s nice to finally see running backs capable of seizing quick burst openings on tosses and sweeps…and temporary escape from many but elite speed defensive players. 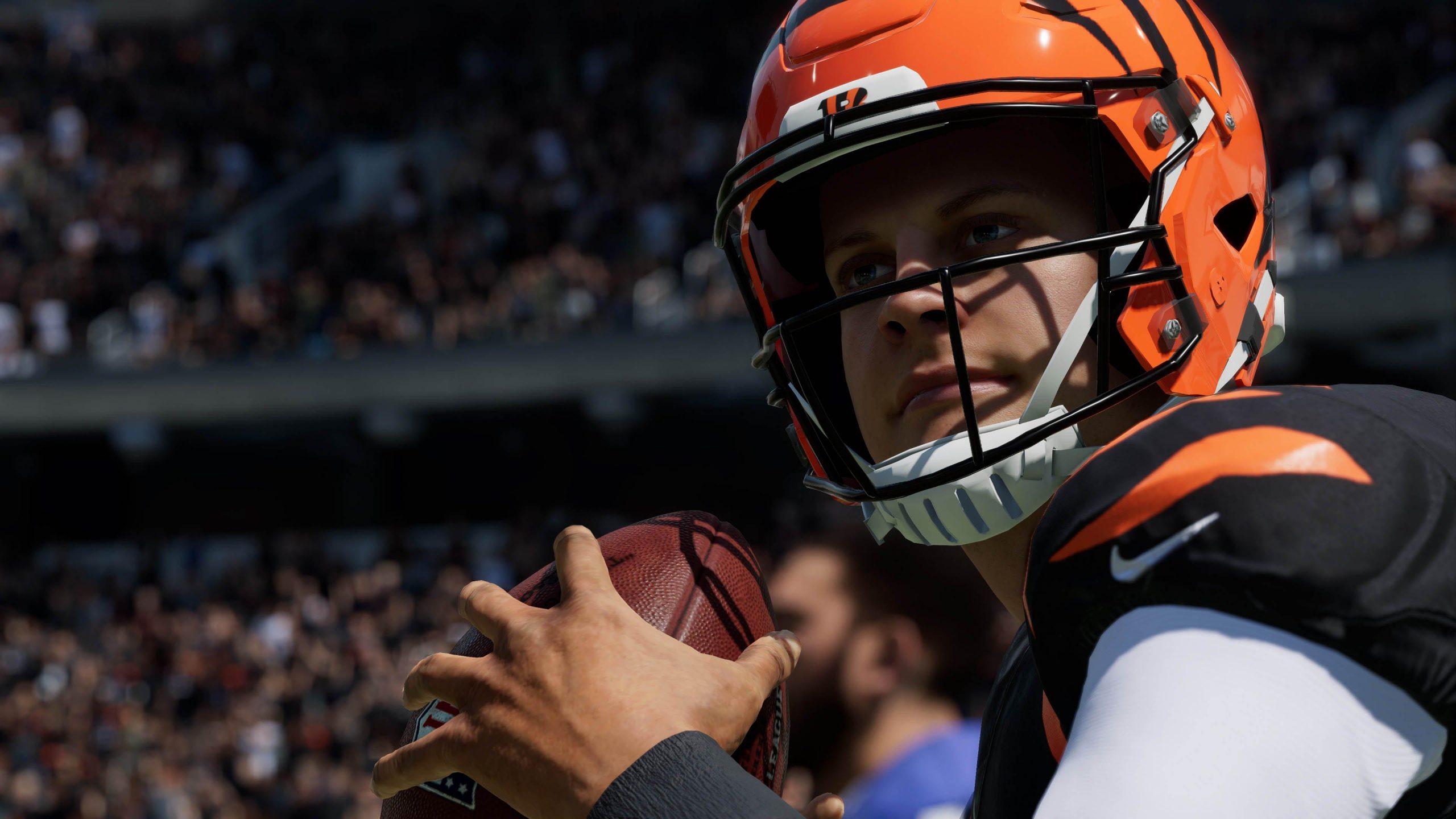 The most noticeable component of FieldSense is Free Form Passing, where quarterbacks now control power of throws (via an on-screen meter), better lead receivers to a reticle, also can aim balls over shoulders. While terrific in concept, this Sisyphean in execution. In Madden 22, an already convoluted passing scheme required receiver selection, type of throw, and more two trigger buttons to simply throw high or low. Now we’re adding yet two more buttons and a left stick control to move the chains in 23.

Still, competitive Madden players may love this nuance (as it a legitimate skill distinction to pick apart even closest defenders). Also, Madden 23 deliberately emphasizes quarterback acumen (‘Skill Based Passing)’ in executing its new advanced scheme…so the better a QB’s arm power and precision, the greater the likelihood of success. The masses, however – noting they’re already faced with calling audibles, hot routes, reading defensive lines and zone adjustments- will probably default to the older scheme. I will give Madden 23 credit, however, for the terrific tutorial on all three available pass interface options.

Other Madden 23 modes get mild boosts. The popular Franchise mode now better emphasizes off-the-field/team nuances such as scouting, city/team atmosphere and free agent negotiation logic. New player tags attempt to yield more realistic roles for specific position and types on a roster. In essence, team nuance is now a contributing factor (for better or worse) to simulation success. I have little doubt this will emerge as a controversial decision for Franchise diehards…but those wanting Franchise to better resemble a favorite team will laud it.

Face of the Franchise (‘The League’) goes the 2K road in mid-week activities and upgrade points…but thankfully isn’t the tedious payola grind of the latter (with a $50 virtual currency price tag to simply create a viable player). I dig the player lock option (my created dude was a monster size halfback), and – even at lower skill levels – said created player given a decent chance to complete assigned tasks. Related, nearly all irritating cut scenes can be skipped. (Hallelujah!) The League, however, struggles in balancing realism with completion goals, whereas a created player will start and play an entire 1st quarter (to ensure sufficient opportunity to meet a weekly benchmark), but – even with a solid performance – get benched the rest of the game. 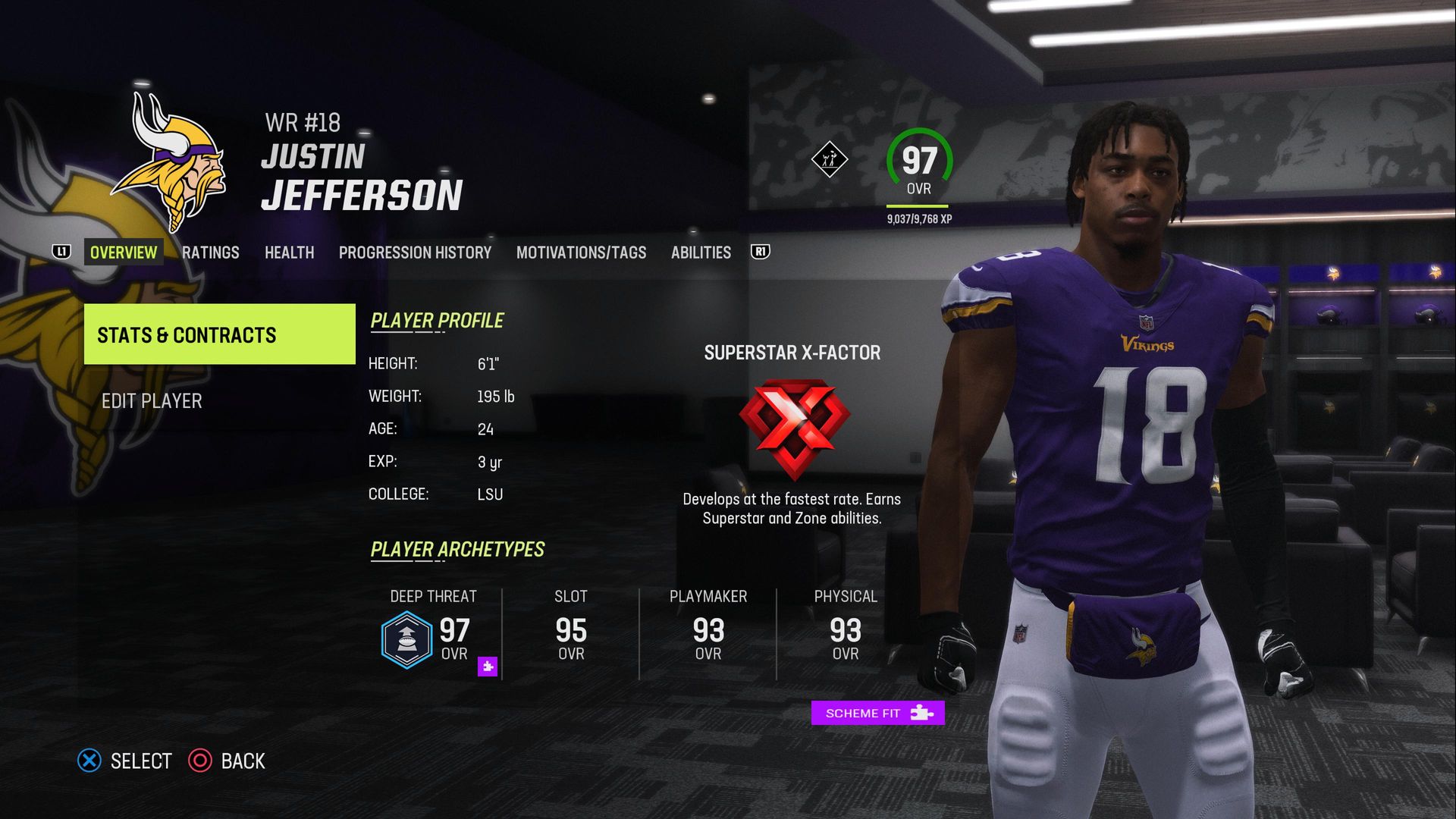 Ultimate Team remains mainly the same, a microtransaction carnival for those who enjoy this type of collecting-based gameplay experience. A truly irritating launch glitch, however, required completing a series of All Pro then Joe Burrow-led tasks to unlock an Ultimate Team. The glitch part is the tasks – no matter how many times they’re successfully completed – don’t unlock the team. This, being egregious, will no doubt be patched soon enough.

What remains from Madden 22 to Madden 23 will drive one nuts. Interceptions, interceptions and more interceptions…even with a promised upgrade to jostling (sigh, add two more button/stick presses to Free Form Passing) between defenders and wide receivers. The same broken logic of bullet passes being more prone to being picked off than standard/lobbed ones persists, with receivers continuously running moronic routes easily disrupted by any defensive player bump. If you love 12-15 yard hook and crossing patterns en masse…this is the game for you 10 years and counting. It’s the Tim Tebow offense, all day every day.

Similar criticisms remain on run and open field blocking, with holes still too hard to find even with elite runners. There’s a slight upgrade to player fatigue – most noticeable on defensive linemen – but this is yet to play a significant role (in requiring regular substitutions).

Madden 23’s playbooks continue to scream for an upgrade of some sort, with recommended plays atrocious, as they never overtly consider X-Factor (gamechanger) players and/or game situations in prominent recommendations. In turn, there’s literally no way of winning a game in Madden without delving very deep into a complicated playbook menu and/or individual formation types. Graphics and audio, as usual, get subtle tweaks. Madden remains perhaps the best-looking game in town. What misses the mark is the continued absence of team/stadium fan dynamics, game situation crowd noise ebb and flow, and an ability for defensive players to pump up the crowd (and impact the momentum meter) on key defensive stances.  Yes, stars look and somewhat play like stars, but Madden 23 doesn’t emulate being in a specific stadium, by any means.

Combined, Madden 23 – especially with Free Form Passing – is certainly different from Madden 22, but not necessarily all that better. It still struggles in being accessible to most, with the bar for control schemes and required knowledge of American football far too high. On-screen help is still minimal, AI generated assistance limited, and fun factor almost non-existent.  It’s obvious the Madden series made a sharp turn toward competitive gaming and Ultimate Team a few years back, with zero regrets.