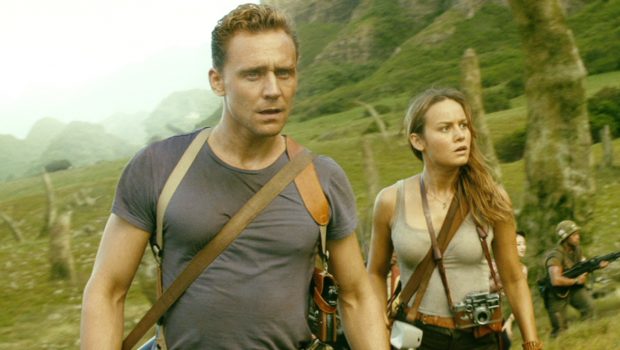 Summary: King Kong returns in this monster flick. In trying to pay homage to Vietnam War films of yore a potentially great film loses it way in furry a heart of darkness.

Kong: Skull Island is a surprisingly intelligent and enjoyable Vietnam-War- homage/ big monster action flick. This is an interesting tack that attempts to balance some deep themes with monstrous confrontations. Kong: Skull Island is an odd film that works in some places and falls incredibly flat elsewhere. It has some gorgeous special effects, a heavyweight cast, beautiful locations, and a screen icon so it should be great. But in choosing this period setting, Director Jordan Vogt-Roberts doesn’t seem to know what he wants to make: a homage to classic Vietnam flicks of old or a banging MonsterVerse Film. He lands firmly in the middle, and he fights a valiant fight to do it but it ends in a stalemate just as the battles of its Cold-War setting did. 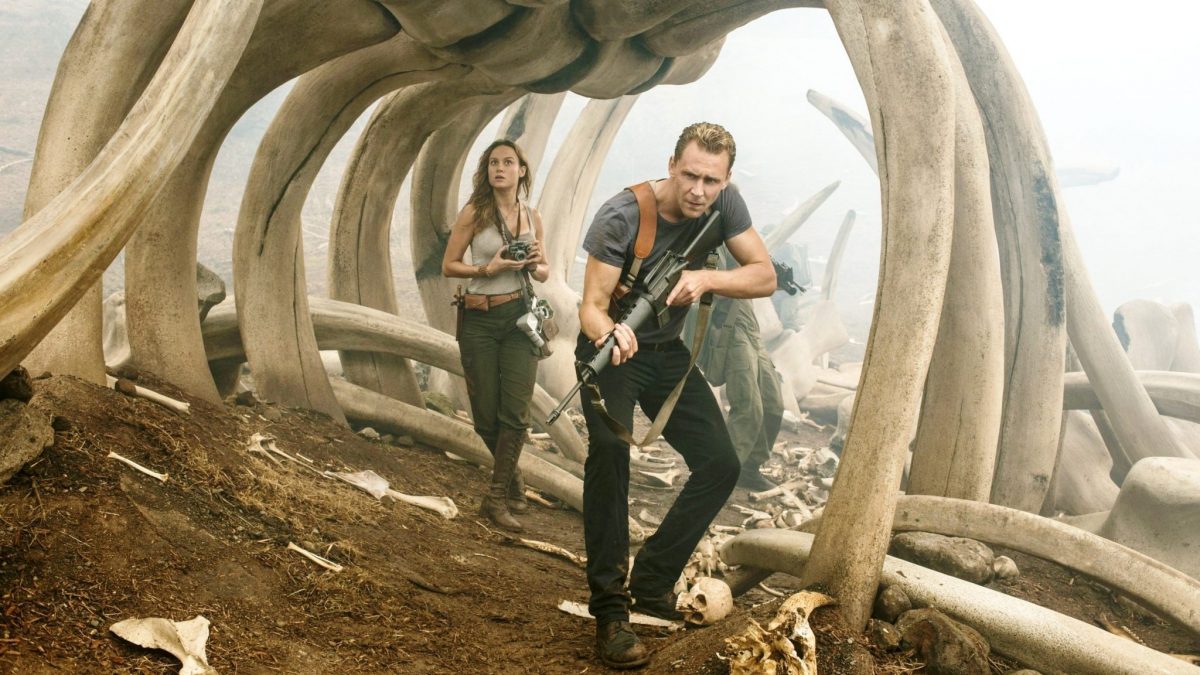 John Goodman’s Bill Randa works for the mysterious Monarch organisation and wants to find a giant monster. He leads the scientific expedition to Skull Island. This introduces the picture’s monster lore – a heathy dose of Hollow Earth theory and Lovecraftian elder creatures. This introduces Jackson’s Lt Col. Preston. He is the leader of The Sky Devils, a helicopter airborne division who are preparing to return home after the loss of the war. Preston takes one last operation to try and deal with the fact “we didn’t lose, we just didn’t win.” Tom Hiddleston’s James Conrad is a similarly weary veteran of conflict. His action cred is on display in his opening bar fight. His character melds suave gentleman with the weary former soldier seeking peace. He takes the mission for the money, but fights from the heart and from his proud family legacy. He’s the foil to Preston. Meanwhile, Brie Larson’s Marson Weaver is the altruistic and morally driven photojournalist hired to document the scientific mission, but is there to keep them honest. And then there’s John C Reilly’s Hank Marlow – an absolutely inspired bit of casting – who is the marooned vet that has integrated into an indigenous society on Skull Island. He just wants to return home to his family – the wife he’d married at the start of WW2 and the son who was born just before his final dog-fight. They are marooned together and must fight to survive after things go wrong when they arrive on the island. For a B-movie, there’s a lot to digest.

The image quality of Kong: Skull Island is good. There are a couple of special features. There is a short documentary of Tom Hiddleston being charming and witty: it’s part behind the scenes doco and part travelogue. It fits the theme of journey and is fun. There are a few deleted scenes. One can see why they were omitted. Overall, the audio quality is good. The audio mixing in the first few scenes bounces between bombastic and flat. It picks up soon after and maintains well throughout the film.

Kong: Skull Island tries to tap into the twin legacies of Vietnam films like Apocalypse Now and The Deer Hunter. On the one hand, it is a big proud monster B-Movie. The monsters are big, the battles the centre-piece of the film, and the acting just that little bit hammy. But then on the other hand, it’s most definitely a Vietnam film. The plot revolves around “the one last mission” that becomes a military disaster, and culminates with a voyage down the river to escape and save the survivors. And so, King Kong appears in the first scene (Vogt-Roberts doesn’t beat around, he knows audiences want a monster flick and he gives them one). Before Samuel L Jackson’s Lt. Colonel Preston Packard chews scenery like a boss – equal parts menace, melancholy, and vengeance.

Kong: Skull Island suffers from a lack of focus that stems from the inability to properly develop characters – there are too many. The crammed exposition leaves the opening seems feel clichéd and forced. There are moments in the second act where the pace picks up and the audience invests emotionally in the characters. Overall the acting is good, but the actors don’t get the exposition time to develop their characters. The performances are a solid balance between drama and grandiosity. You can see the cast having fun, but it’s a little wasted as they development they need.

The actions sequences are a lot of fun. You root for Kong as he fights his reptilian foes. There are a couple of genuinely scary moments and a little bit of gore. It’s held together with consistent cinematography. Cambodia, Hawaii, and Queensland, Australia all look lush and beautiful and intimidating. The dialogue is a fair balance between camp and drama. The score is a great mix of classic rock and ominous orchestral scores. Kong: Skull Island takes itself seriously, but not too seriously. And this is the problem. There are two films here. One is a serious film about war and not letting go of anger and vengeance. The other is a monster flick that seems removed for them cold-war anxieties of its antecedents. I can see how Vogt-Roberts wanted to bring them together and why. But he doesn’t quite succeed.

Unfortunately, the cuts between drama and comedy are jarring. The carnage that kicks off the second act lacks emotional investment and pathos. We should care, we should be excited! But the violent action set piece that establishes the plot is listless and hackneyed. Kong recovers for a time after this. But its reliance on references and cues to earlier films and their legacies make this predictable and something of a pastiche. Kong tries to build meaning by associating itself heavily to these classic Vietnam flicks. But it doesn’t have the emotional or dramatic clout for it to work. Consequently, it sucks some of the fun out of the monster battles. I was unsure, in places, of who I was meant to sympathise with or cheer for.

Kong: Skull island is by no means a bad film. I went in expecting a bad film, and was pleasantly surprised by it. Little things, like using villagers from Trung Hoá rather than Hollywood actors, give it a sense of authenticity and contemporary values. Things like that and the quality of acting meant it defied my expectations to the extent that I was rooting for it to succeed, like we’d cheer for Kong – but it fell frustratingly short. John C Reilly really carries the film. His performance is worth the price of the DVD, especially if you’re a fan. But he alone is not enough to bring pathos, balance, and humour to a film overshadowed by Packard’s desire for Vengeance and Kong’s larger than large presence.