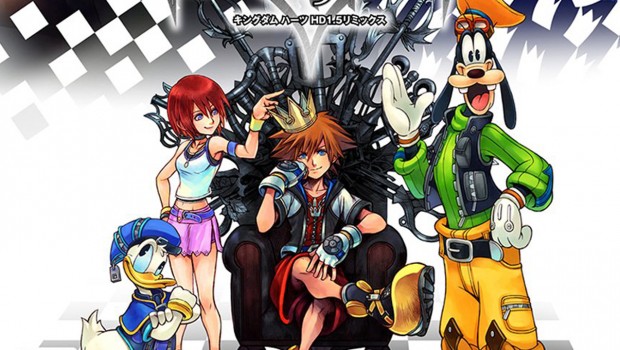 Summary: With top notch voice acing and spectacular music, beautiful visuals and a veritable raft of fan favourite characters, Kingdom Hearts still has the goods after all these years and will afford a good 40 or so hours of solid and engrossing gaming for fans new and old.

Like many other Square fans, I admit to having reservations about Kingdom Hearts when it was first announced 11 or so years ago. At the time a stalwart fan of the Final Fantasy series (I eventually jumped ship after FFX) and having grown up with many of the Disney classics, I wasn’t sure as to how well the two seemingly disparate influences would mesh together to form a satisfyingly cohesive whole. Yet, somehow Square managed the seemingly impossible and my initial fears were soon allayed once I put the disc into my Playstation 2 and found myself immersed in exploring the many worlds I’d experienced visually as a child, this time also populated by series favourites from the FF games like Cloud Strife, Sephiroth and, erm, Wakka and Kingdom Hearts positioned itself as a beloved franchise of many RPG fans.

Now, 11 years later Kingdom Hearts HD 1.5 Remix has been released in the build up to the long awaited Kingdom Hearts 3, reminding older gamers of why they fell in love with the series and introducing a new generation to the magical synergy between the worlds of Final Fantasy and Disney. 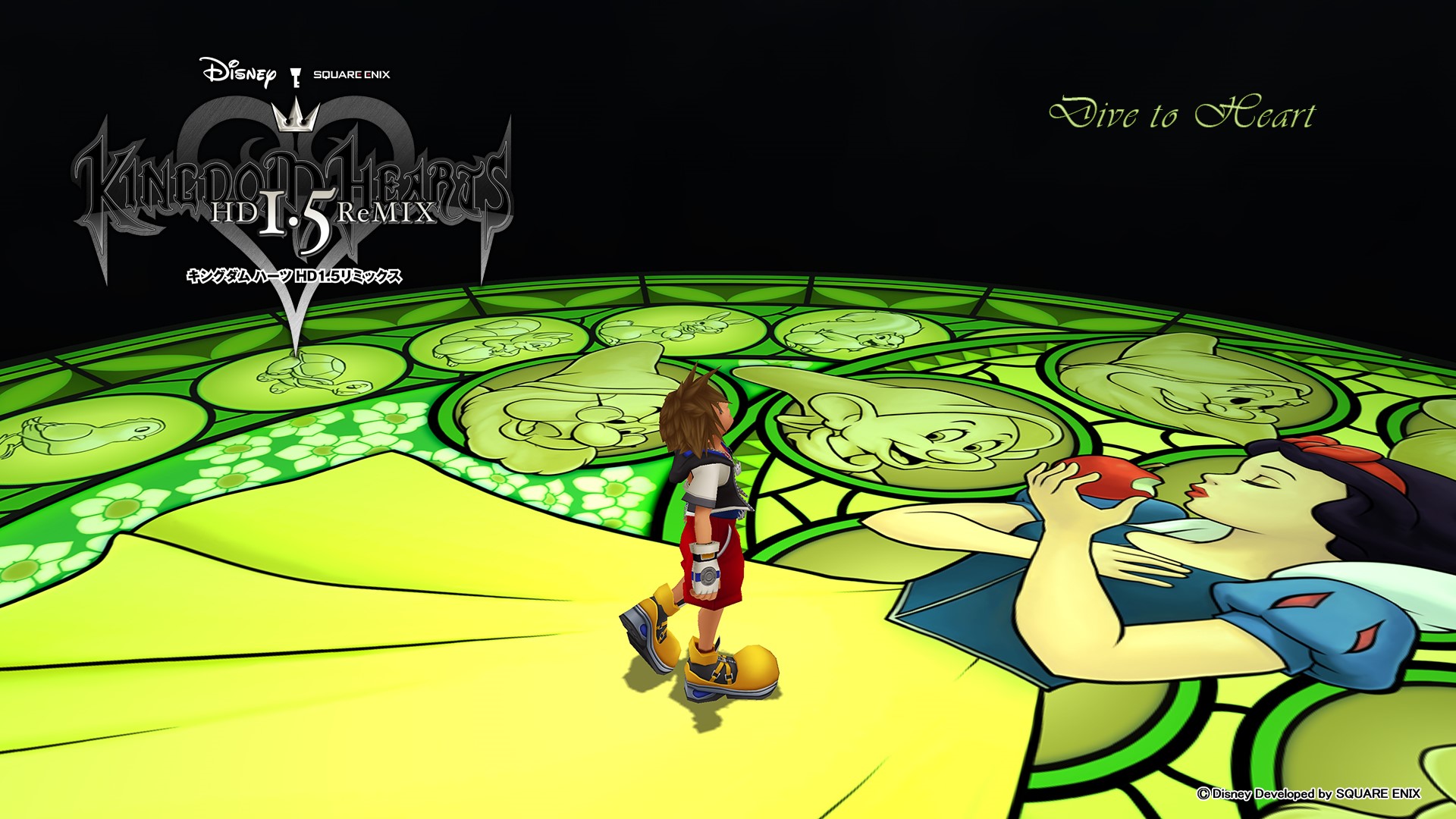 Although ostensibly a compilation of three titles, the first thing fans should be aware of is that this collection only actually includes two playable games, with the third, 358/2 Days, strangely being a collection of remastered FMV’s taken from the game originally released on the DS. Totalling nearly 3 hours, 358/2 Days follows Roxas, a character who appears in Kingdom Hearts 2, and his origin story as he undertakes missions for Organisation 13, which is comprised of Nobodies who have no hearts and, by proxy, no feelings, yet they want to possess the ability to feel something, which is an emotion in of itself… Confusing stuff, to be sure, and the lack of Disney characters and prevalence of scenes where the characters sit on a clock tower eating Sea Salt Ice Cream and waxing lyrical about their feelings (Seriously, these scenes make up a hefty chunk of the narrative) all serve to present an unsatisfying experience, although you do get trophies for watching it, so there’s that incentive, I guess.

Having never played the original release, 358/2 Days comes off as a pointless exercise in making the story behind the franchise needlessly convoluted, a problem which has plagued the series since its relatively straightforward original entry. Still, diehard fans will probably enjoy its inclusion in this compilation. 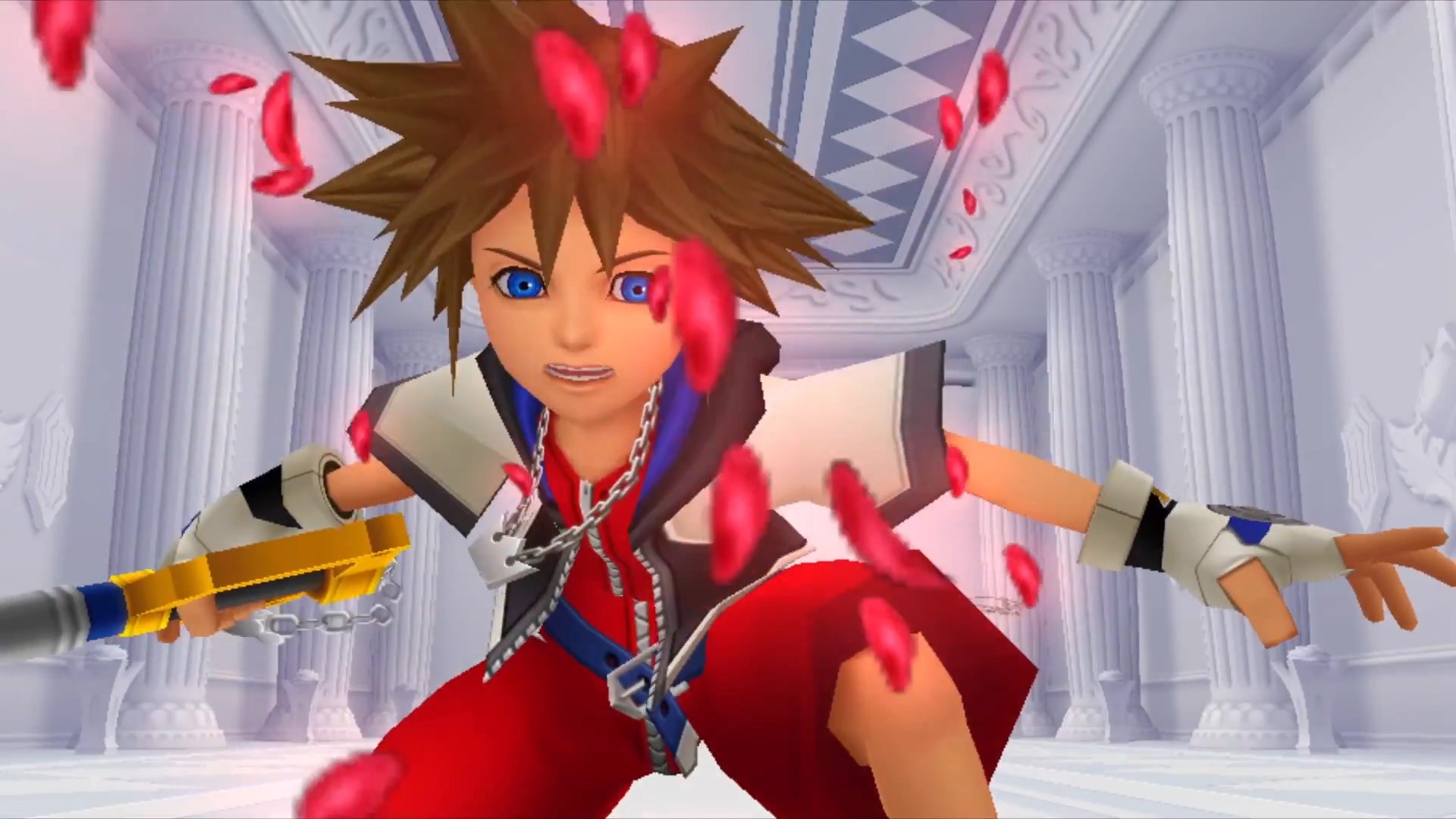 The real jewel in the crown is, of course, the original Kingdom Hearts, now retextured in glorious high definition. Another bonus is that it’s actually the Final Mix release, previously only available in Japan, which allows Western gamers to experience the additional boss fights, weapons, cutscenes and abilities previously unavailable in the local release, including a frustratingly tough battle against Xemnas, later revealed to be the leader of Organisation 13.

Despite these small changes the game unfolds mostly as it did upon its initial release, introducing protagonist Sora as he cavorts with his friends Riku and Kairi on an idyllic tropical paradise named Destiny Island. Yet our trio dream of journeying to different worlds, building a raft together in order to explore what lies beyond their home. A sudden storm and invasion by the Heartless, shadowy creatures intent on consuming each of the different worlds, sends Sora careening through a portal to a hub world known as Traverse Town.

Here Sora comes across Donald Duck and Goofy, themselves on a mission to locate King Mickey, who disappeared after noticing the disappearance of stars in the sky and realising that it was a sign that the heartless were attacking and destroying worlds. Intent on finding some way to defeat the Darkness the Trio journey from world to world in their Gummi Ship, encountering a roster of characters familiar to fans of both the Disney and Final Fantasy universes. 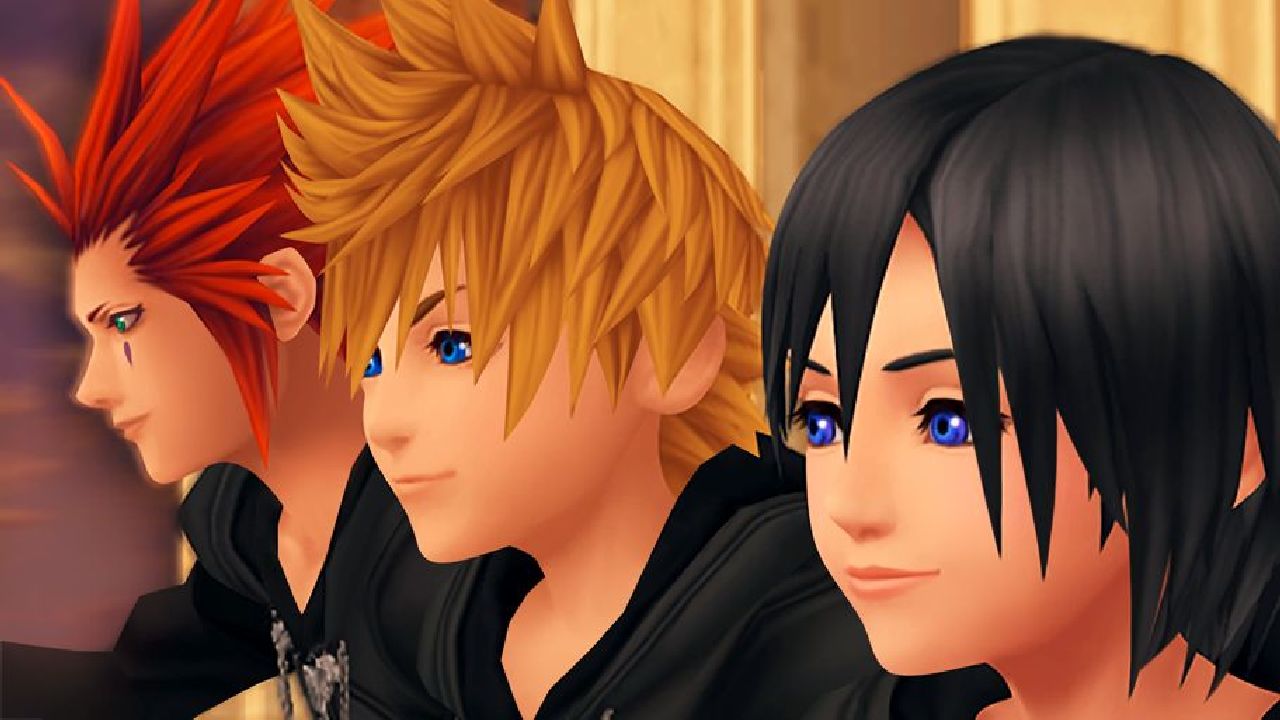 The whimsical nature of the story still holds up rather well by today’s standard and it’s a real joy exploring the bright and colourful Disney-Themed worlds. The first hour of the game is still a bit of a chore, with the tutorial levels and fetch quests, but once you gain access to the various worlds on offer the game falls into a groove and you’ll find yourself glued to the screen. The myriad of side-quests and other distractions serve to extend the playing time and most feel necessary rather than mere filler to pad out the length of the main quest.

In a deviation from the turn based combat of Final Fantasy, combat is in real time, similar to that of The Legend of Zelda: Ocarina of Time, with a quick press of the R1 button locking on to the nearest enemy. The camera can still be a tad uncooperative, even with the ability to manipulate it using the right analogue stick and using R1 to centre it, and seems to be focused slightly lower than it was on the game’s original release. Another bone of contention is that the few areas that call for precision jumping are made all the more difficult by the controls, although once the glide ability is unlocked these issues are mitigated somewhat.

These small issues aside, which were admittedly mostly present in the original version, Kingdom Hearts is still an amazingly fun experience; travelling from world to world, meeting iconic characters such as Hercules, Aladdin and Simba and unlocking summon abilities (Featuring Bambi!) all serve to create an experience that feels just as fresh and as exhilarating as it did way back in 2002; the HD touch-up has restored the splendour of the graphics to appeal to a generation spoiled by 1080p visuals and are presented sharply and with beautiful clarity. The colours pop and the characters models are simply delightful to watch in action; the same can be said for the environments, although some areas appear to have benefitted from the graphical overhaul more than others. 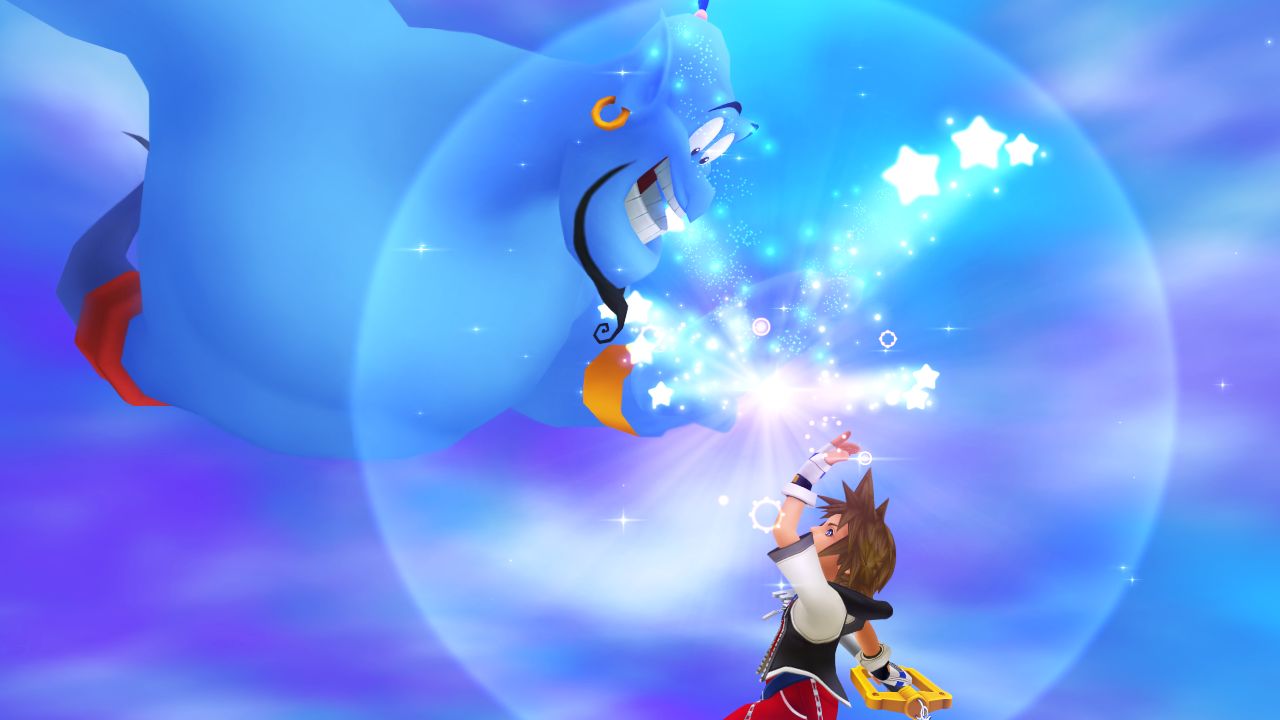 Lastly we have Kingdom Hearts RE: Chain of Memories, the semi-sequel originally released on the GameBoy Advance before being ported over to the PS2. The main difference between this and the original game is the overhaul of the combat system, which eschewed the freeform melee fighting with an active card based technique. Following on directly from Kingdom Hearts, the plot has our intrepid trio journeying through their memories of events from the previous game in a thinly veiled excuse to re-use assets from that title. As such, when played directly after the first title, the game can feel a little too familiar; even with the differences in narrative, in essence the game just retreads what you’ve already experienced. That’s not to say that it’s not worth your time, only that the experience is tempered somewhat when played back to back with Final Mix.

The card based combat can take a little getting used to, with your actions limited by what cards you have in your possession. Cards represent certain attacks, abilities, magic spells and items, and once used they disappear from your pack, so careful management is a must; you can build combos with the cards and regenerate lost cards and there’s a sufficient amount of depth to the system but this major deviation in combat style may serve to deter some players. Navigation is also dictated by use of the cards, with Sora connecting rooms by placing cards that dictate what may lie ahead; overall, this drastic change to the core mechanics of the game creates an experience that is unique to its predecessor whilst still exploring the familiar environments present in kingdom Hearts, and although daunting at first, once you master the new style of gameplay the experience can be just as rewarding as that found in Final Mix. However, I’d have to recommend not diving into RE: Chain of Memories immediately after completing Final Mix. 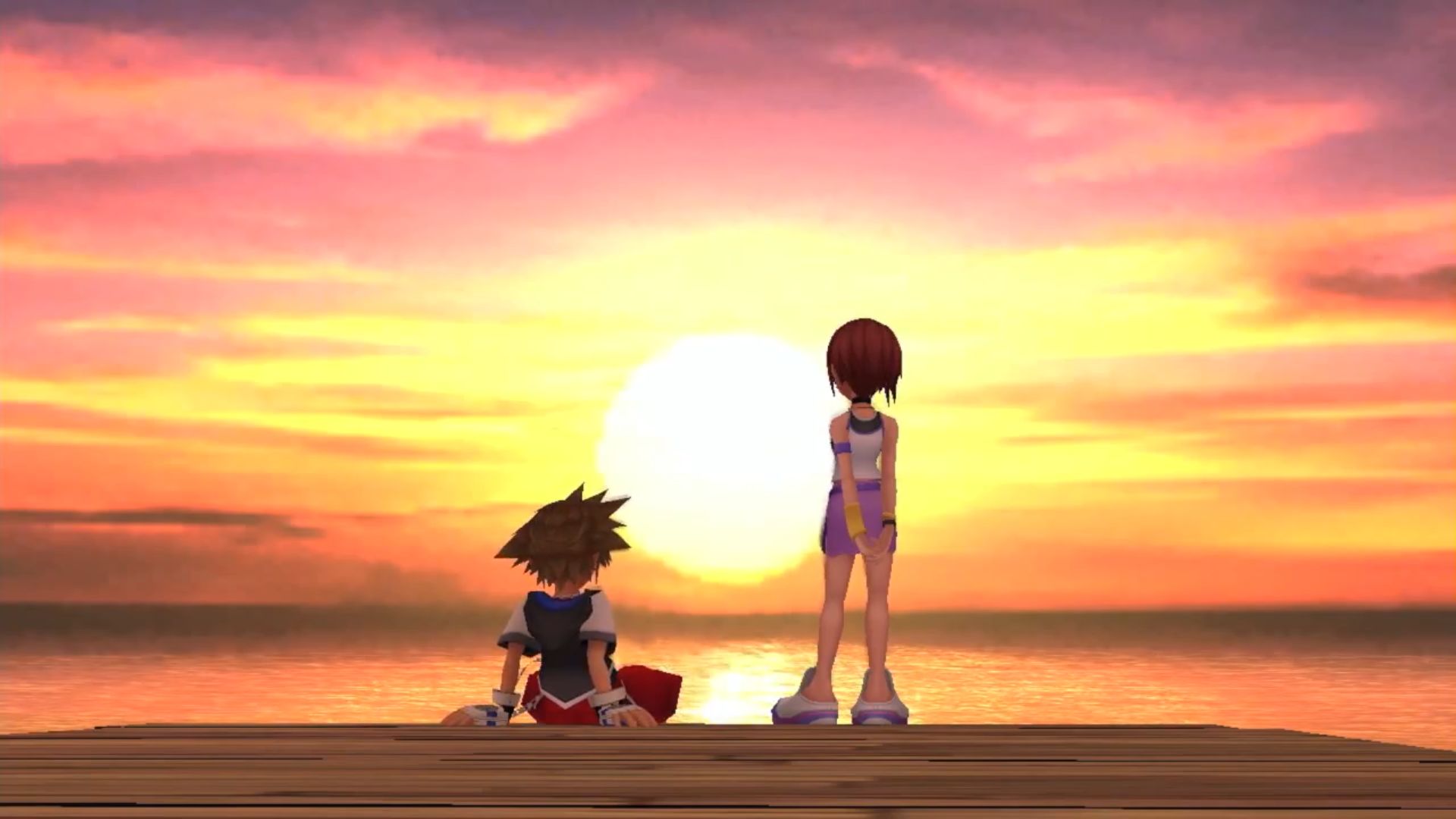 Kingdom Hearts HD 1.5 Remix is a vibrantly realised experience that harkens back to the days of my youth. Still as engrossing today as when it was released, the updated visuals have lent a new lease of life to this beloved classic. The visual and audio design is stupendous and the game is imbued with the sort of magic both Disney and Square used to pull off effortlessly. The main draw of the collection will be Kingdom Hearts Final Mix for many fans, but RE: Chain of Memories and 358/2 Days are certainly worth a look for insight into the continuing mythology of the series. Sure, it would have been nice to have had the complete game for 358/2 Days included, and certain mechanics are a little outdated, but when you’re cutting a swathe through hordes of Heartless in a locale like Halloween Town, iconic music ringing in your ears, you realise that there are few games available that can transport you to the realms of enjoyment that Kingdom Hearts achieves.

With top notch voice acing and spectacular music, beautiful visuals and a veritable raft of fan favourite characters, Kingdom Hearts still has the goods after all these years and will afford a good 40 or so hours of solid and engrossing gaming for fans new and old.