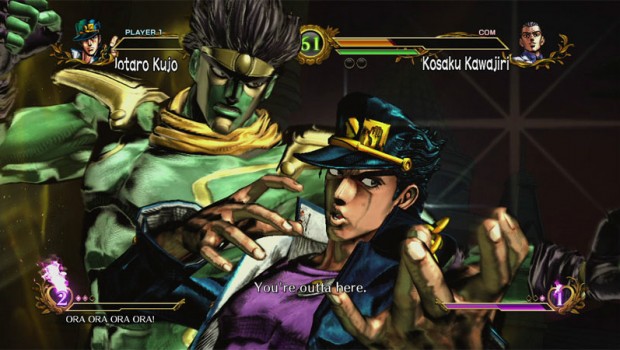 Summary: If you are already a fan of JoJo’s Bizarre Adventure All Star Battle, than I highly recommend it!

JoJo’s Bizarre Adventure All Star Battle is a 3D fighting game based on the anime and manga of the same name written by Hirohiko Araki. It has been in print since 1986 and is still going strong today through anime and the continued run of the manga. It follows the story of the Joestar family through the misadventures of various generations in history starting from 1980’s Great Britain, 1938 New York, 1989/1999 Japan, 2001 Italy, 2011 Florida, an alternate timeline 1980 United States and 2012 Japan. Phew!

However games that are based on franchises such as these are traditionally made for the fans of that series with the wider demographic of gamers confused and alienated from enjoying the game. Personally I have heard of the series and heard it is pretty good but I haven’t read the manga or watched the anime. That raises a couple of questions for the gamer. Will JoJo’s Bizarre Adventure All Star Battle be another of these alienating experiences that only fans of the series will get to enjoy? Or will it be a gateway to a new series that I will come to enjoy. Let’s find out! 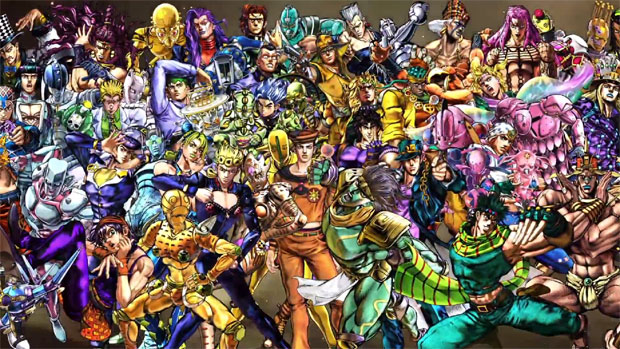 When I loaded this game, I encountered a request to download content. I understand this happens on occasion for fighters to balance characters for online battles and competitive (being a player of the Street Fighter series I’m familiar to this) however on closer inspection this patch was to allow me access to the campaign and the online mode which took about ten minutes. Even more infuriating was a content patch that I was subjected to while in the process of playing.

These do kill the fun in the sense that when I load a game in for the first time I do not want a piece of downloadable content that unlocks parts of the game that I should have immediate access to. According to other sources because this game was initially released in Japan, there are at least another two of these patches in the works for the international release. So what about the gameplay? 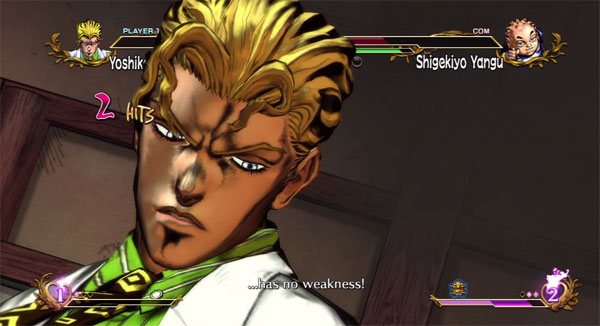 The controls are reminiscent of a simplified street fighter combo system with groups of characters showing a variety of different play styles which are reminiscent of the characters in the show, they are Hamon which are energy based fighters that can boost the power of attacks or charge their special attack meter. Vampirism is unique to one character which allows that character to use attacks in order to their restore stamina and the special attack meter.

Also, the damage that the character receives can heal over time which is also available to certain characters. This increases their attack power but it lowers their special attack meter which when empty leaves them vulnerable and like the vampirism character they can heal damage. Stand which brings out a companion which fights along them giving them access to other move sets which can bring a variety on how they fight. 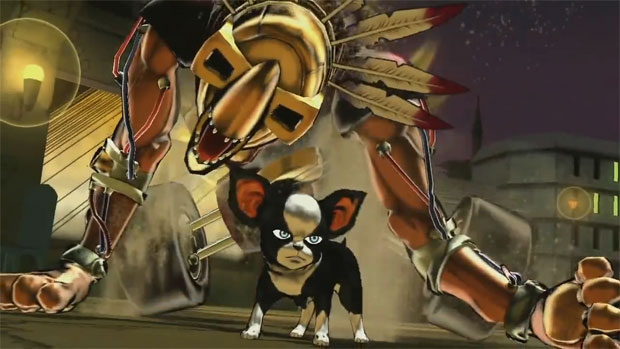 Mounted gives them access to horses allowing their characters to fight on or off horseback and Baoh Armed Phenomenon which allows that character to transform according to the needs on battle based on the amount of life lost with more benefits being added the lower the health is. The main modes are the story mode where you play through the story of the manga covering the first seven arcs, I found it to be poorly covered as the story was mostly text and minor scenes before the fight with each fight having secret challenges finishing this gives you access to the entire fighting roster.

The other mode campaign which is odd it has a strange mobile phone game sensibility which has you searching for boss characters which costs a point of energy which recharges over time. The thing is here you can invest real money for perks like an energy recharge or skewing the drops to work the way you want. It feels like a really odd choice to have a system like this in a game that you would pay full retail for. 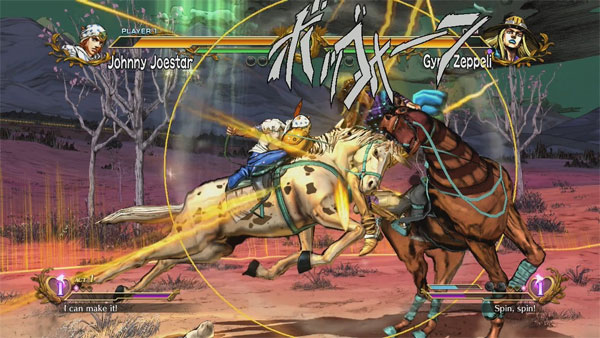 The graphics in this game is very reminiscent of the art style that Araki uses in the manga so fans of the manga would be pleased. It is very much a fan service at its core and it really is a unique art style that I haven’t seen in other games that have been adapted from anime or manga series have adopted a more of a cell-shaded style. The fact that the developers, CyberConnect2 have decided to go in this direction shows the level of respect and reverence they have paid to the source material which is very rare to see in games based off licensed material. 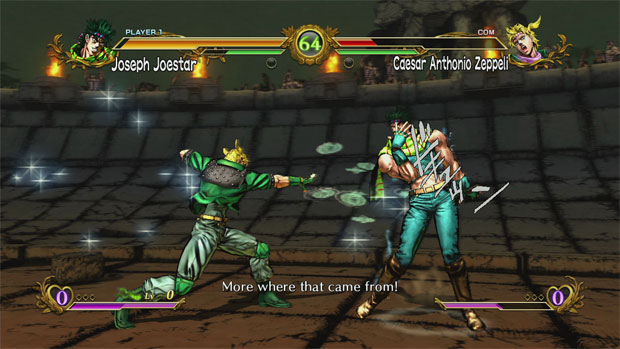 I personally enjoyed JoJo’s Bizarre Adventure All Star Battle and this game has enticed me to look into the anime and manga series because of me being a fan of this genre of media; however this game is not necessarily for everyone. If you are already a fan of the series I highly recommend it, if you are a fan of more competitive brawlers this may not be what you are looking for and with the new patch coming for Street Fighter IV the competitive scene will be more focused there. 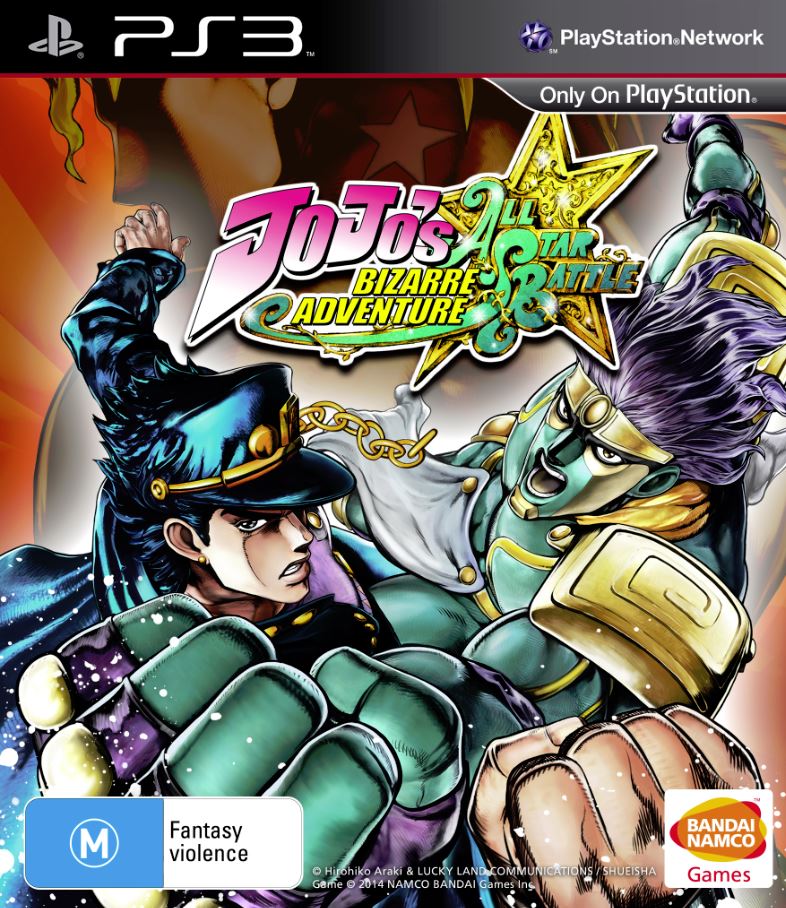