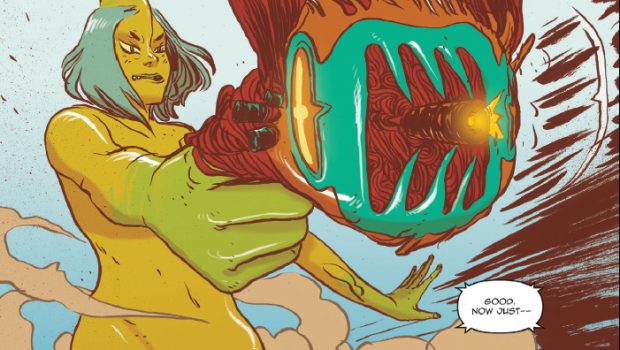 Summary: An interesting spin on the kaiju genre that looks like it will go off in its own direction.

Jenny finds herself naked fighting a kaiju as surprise! Her dad was a Kaiju fighting other giant monsters and passed the genes down to her. Her father got his best friend to hide the fact she also had this gift but things changed and they needed her help. Jenny is not pleased and runs off to hide with one of her friends.

If you every wanted to know what Ultraman wore under his skin-tight jumpsuit then Jenny Zero answers that question. “We told you to put on the jumpsuit!” is the command and Jenny complains about photos ending up on the internet.

This does remind me of the teenagers in Neon Genesis Evangelion but Jenny does not seem to whine as much and is justified in her complaints due to people lying to her and also reversing the serum that kept her from turning into a kaiju.

There is quite a lot to unpack in this story and if you are a fan of the kaiju genre and want a different take on this then I would recommend it.

I originally wanted to have a look at this as I thought it would be different and it did remind me of the Big Girls comic from Image but with a different spin on it. It does look like it is going to go off in a different direction with the secret police and conspiracy angle.