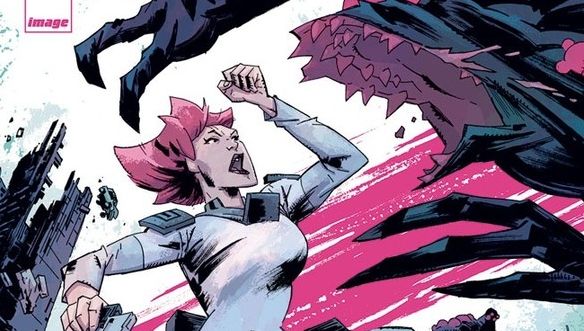 Summary: Kaiiju vs. Giant Ladies, I am on board already, don't need to hear anything else.

Set in a world after some unspecified catastrophe has caused boys to turn into giant monsters called Jacks, we follow one of the defenders of a safe zone, a 300ft high woman called Ember who keeps the peace with her handlers to stop the monsters attacking the city. It is not always what she wants as her boss has no qualms in stone cold murdering children who have started to turn.

Not having very much downtime she gets to sit down at least, only to find a Jack has infiltrated far into the city and she has to fight. We also find out that some people disagree with the extreme measures to control the monsters and want them to win. Who will triumph?

From what I read in the blurb at the end of the first episode, this a brand new story and inspired by kaiju films and has the hint of Neon Genesis Evangelion about it. I am sure it would also be big with people who have a giantess fetish.

The setting and characters ring true and the artwork is great in the context of the story.

I understand the “but why would people want to spread infection?” angle given all the people getting fines for breaching lockdown and not wanting to wear masks even though they are offered to by the police before they get fined.

Might be an interesting one to come back later and see how they develop the story and what happens with the characters.