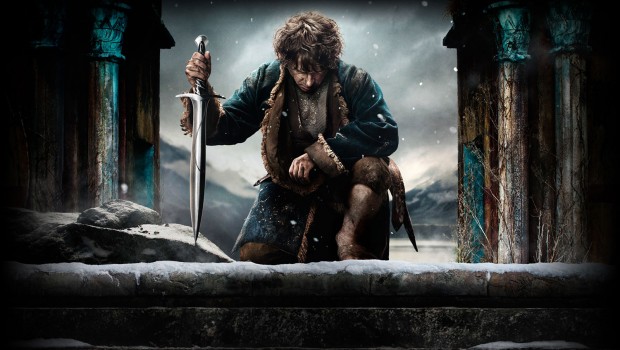 The Hobbit: The Battle of the Five Armies DVD Review

Summary: If you’re itching to see how the trilogy ends and are longing to return to Tolkien’s fantastical world then The Hobbit: The Battle of the Five Armies will more than satiate your desire, even if it feels like a mere stopgap before the proper version of the film is released.

Not too long ago I wrote a review for Mockingjay Part 1, the latest entry in The Hunger Games franchise where I spent much of my time lambasting the decision to split the final chapter in the series into two parts, citing the spread much too thin Hobbit films as a prime example of when a studio’s greed leads to an unnecessary expansion upon the original source material. 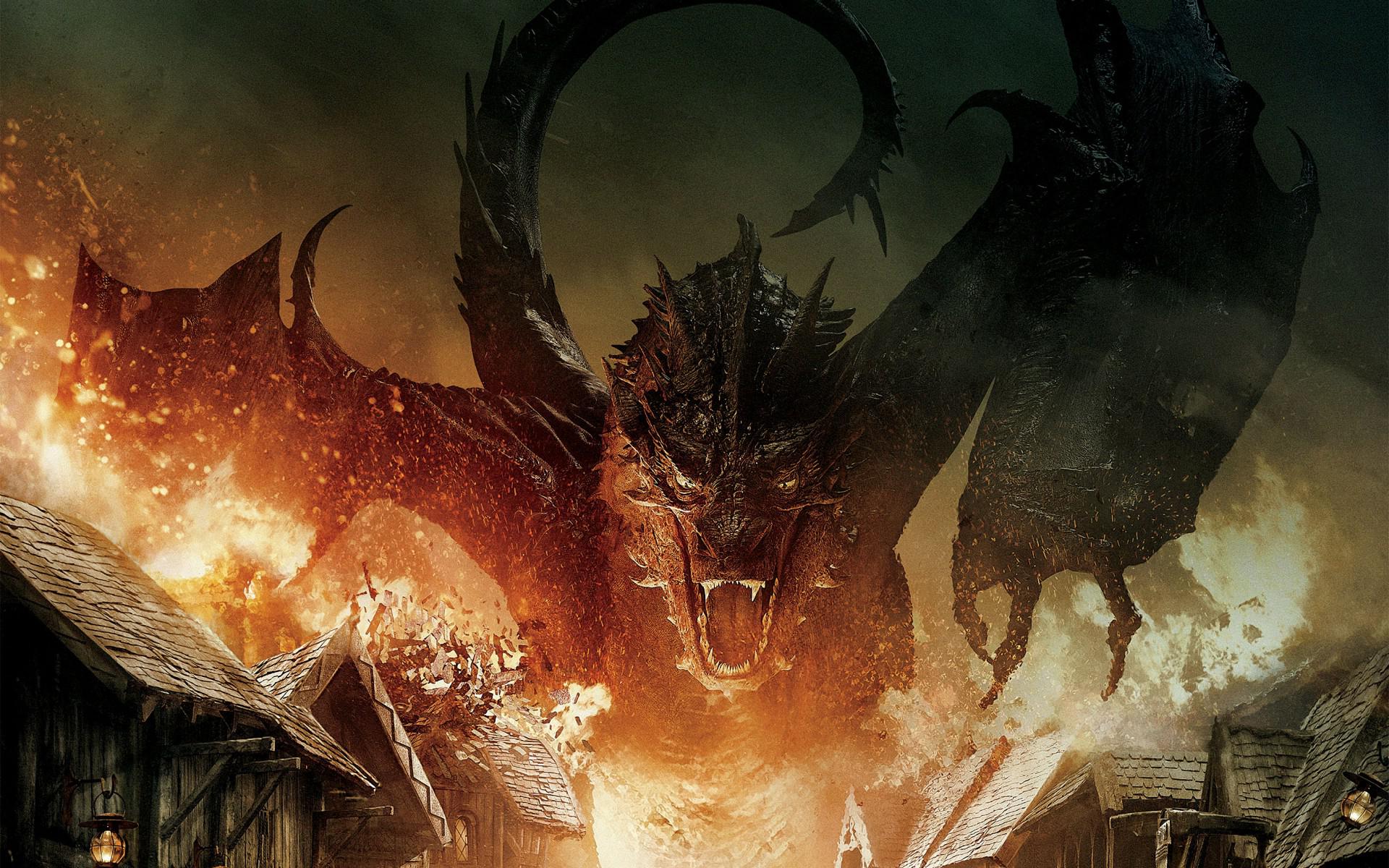 That’s not to say that I don’t enjoy the Hobbit films for what they are but it’s undeniable that they could be held up as the very definition of excess when you consider the slender source novel being expanded into a trilogy; Peter Jackson and co. have added much derived from other pieces of Tolkien’s work and also added a lot of new content in order to justify spinning the tale into three films but overall the films feel somewhat bloated as a result, particularly the meandering first entry.

Nonetheless, I always welcome the opportunity to dive back into the realm of Middle Earth and, after the much superior second instalment The Desolation of Smaug, I had relatively high hopes for the concluding chapter of Bilbo’s tale. 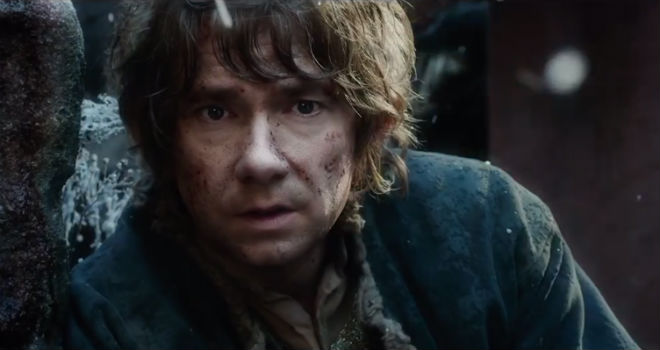 Picking up where the last film left off, the film opens with Smaug wreaking havoc upon the terrified townsfolk of Lake-town in a setpiece that many had been eagerly anticipating; unfortunately, what was promised as a major sequence in the previous film amounts to little more than a ten minute wrap up that feels somewhat underwhelming given its potential.

The films then shifts its focus back to Bilbo (The ever reliable Martin Freeman) and his not-so-merry band of Dwarven adventurers as Thorin Oakenshield (Richard Armitage) becomes more and more obsessed with retrieveing the Arkenstone from Smaug’s expansive collection of treasures hidden within the Lonely Mountain. 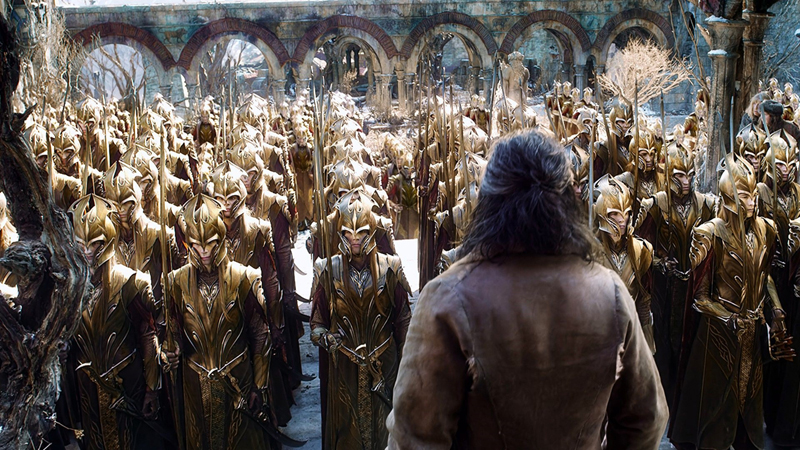 Elsewhere, another subplot is hastily wrapped up as Gandalf, last seen imprisoned by the Necromancer, is rescued by a cast of familiar faces from the LOTR trilogy as the true identity of the shadowy figure is revealed to be Sauron, much to the surprise of none. Both of these plot elements had the potential to be something much more but feel notably truncated, especially the defeat of Smaug by Bard the Bowman (Luke Evans), which really should have been the climactic scene of the previous film rather than a mere addendum.

Once both of these subplots are summarily dismissed the film then becomes basically an hour and a half long battle scene that, possibly due to the overuse of CGI when compared to the LOTR trilogy, comes up feeling a little hollow despite the myriad of action scenes designed to elicit gasps of excitement from the audience. The titular battle comes as Sauron’s army of Orcs descend upon the Lonely mountain, forcing a conflict between the dark forces and the reluctant alliance of the armies of Elves, Humans and Dwarves, with the fifth army presumably referring to the Wargs, although this understanding comes from my knowledge of the novel rather than any explicit reference made in the film. 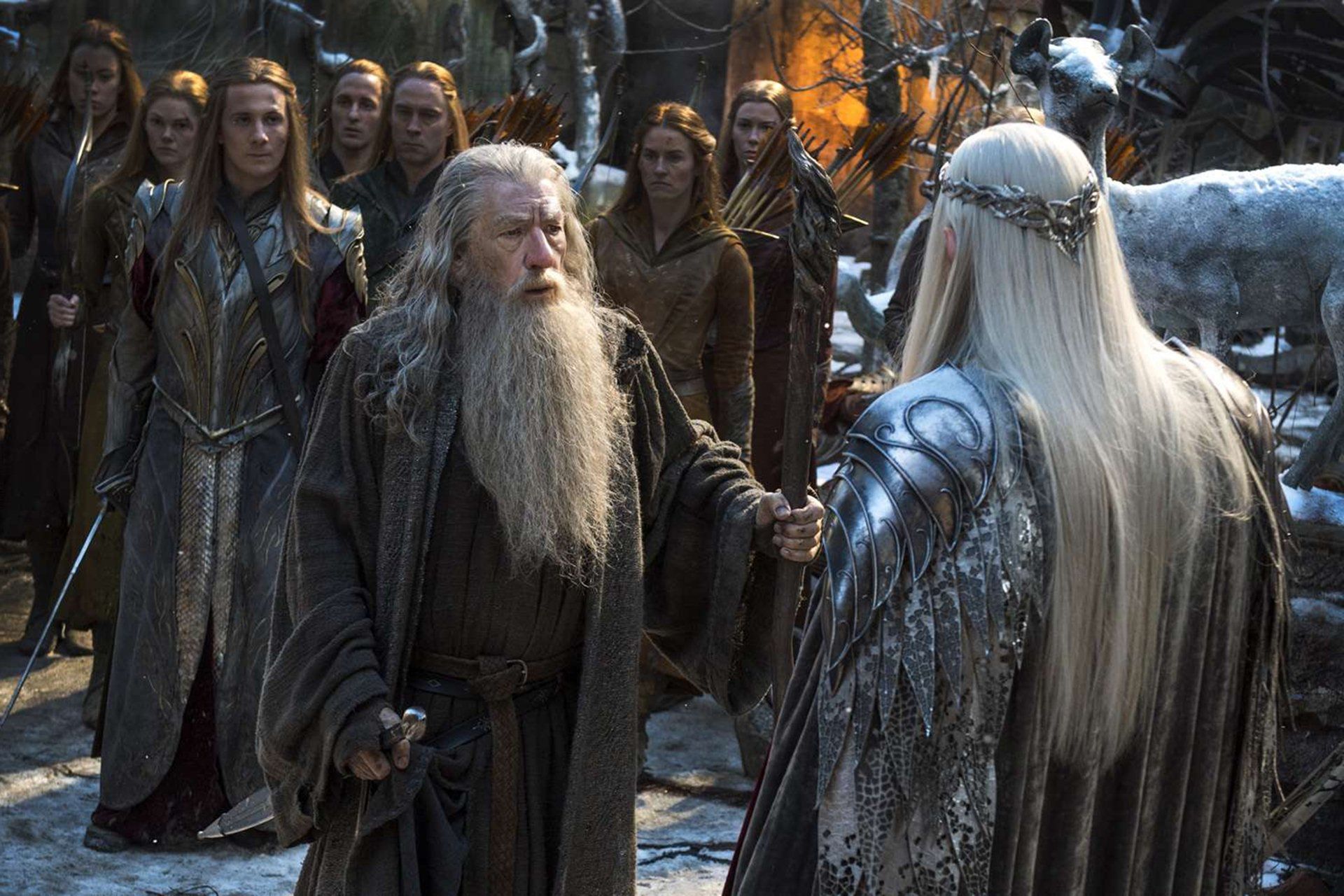 Of course, the battle itself is a sprawling spectacle but it all just seems so devoid of the passion that clearly drove Jackson when making the first trilogy (As many would already know, Jackson only stepped up to the directorial plate once Guillermo Del Toro bowed out and, unfortunately, this reluctance shows somewhat as the trilogy has unfolded).

There are some undeniable highlights in the film, first and foremost Bilbo’s characterisation and any scene featuring the delightful Ian McKellan, and Thorin’s descent into madness lends a sense of true pathos to proceedings as you watch a man (Or Dwarf, as is the case here) who has set out on a quest with honourable intentions becoming slowly corrupted by greed and an overwhelming desire to restore his race to its former glory no matter the cost. The romantic thread that runs through the film regarding Tauriel (Evangeline Lily) and the Dwarf Kili (Aidan Turner) is still as annoyingly superfluous as ever but both actors make the best with what they’re given to work with. 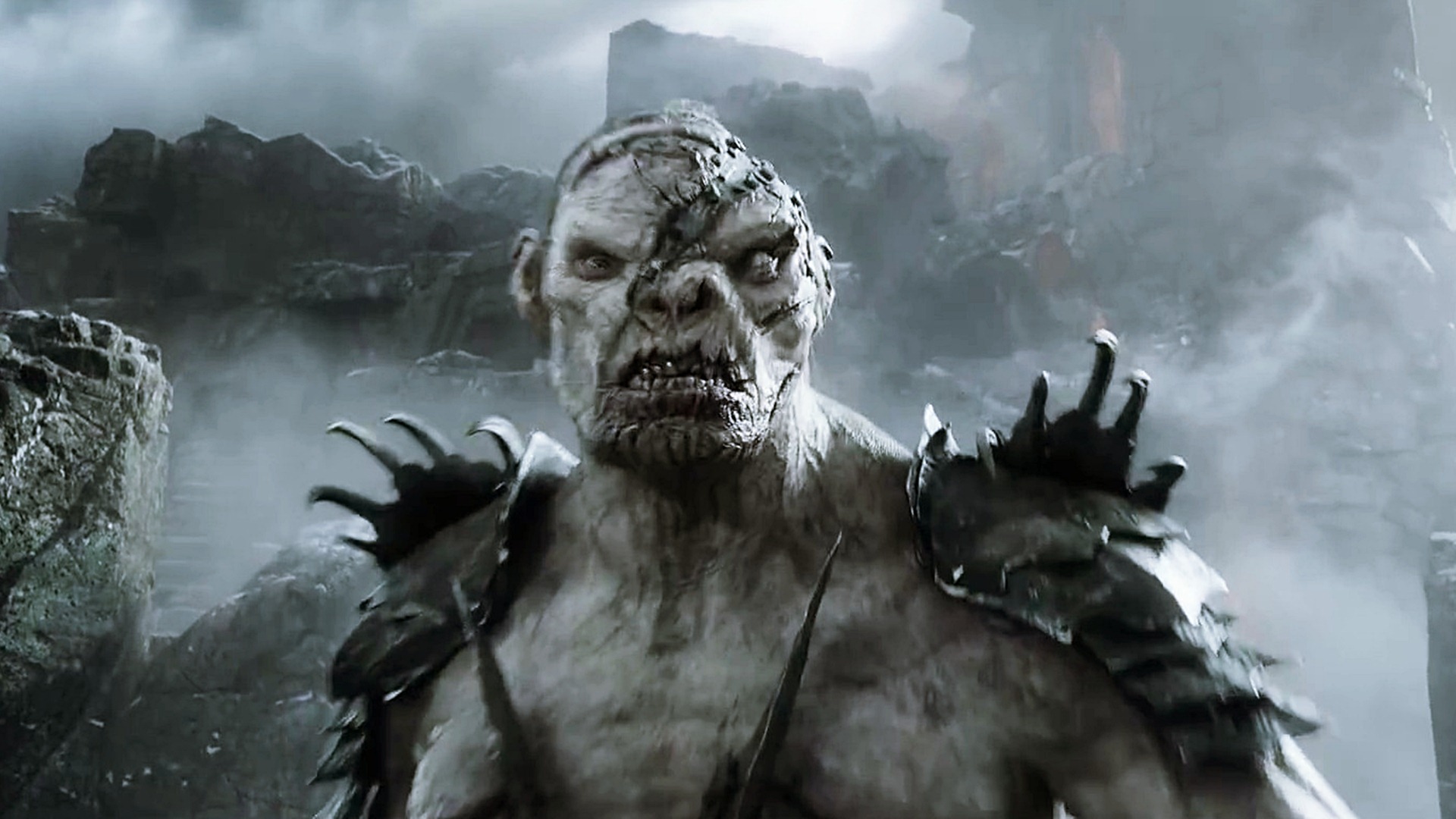 One thing that struck me about The Battle of the Five Armies was its brevity; calling a film that runs at two and a half hours brief may be considered ridiculous in other circumstances but here, as the shortest of any of the Tolkien films, it genuinely feels that a lot of the more meatier stuff was left on the cutting room floor in favour of the endless action scenes.

It may appear that I didn’t like that much about the film but that’s not entirely true – I was just disappointed by how underwhelming the entire affair was as the climactic act of a story beloved by so many.

Roadshow has done an admirable job with the DVD transfer, with top marks in regards to both audio and visual quality, making for as fine a viewing experience as the format allows. 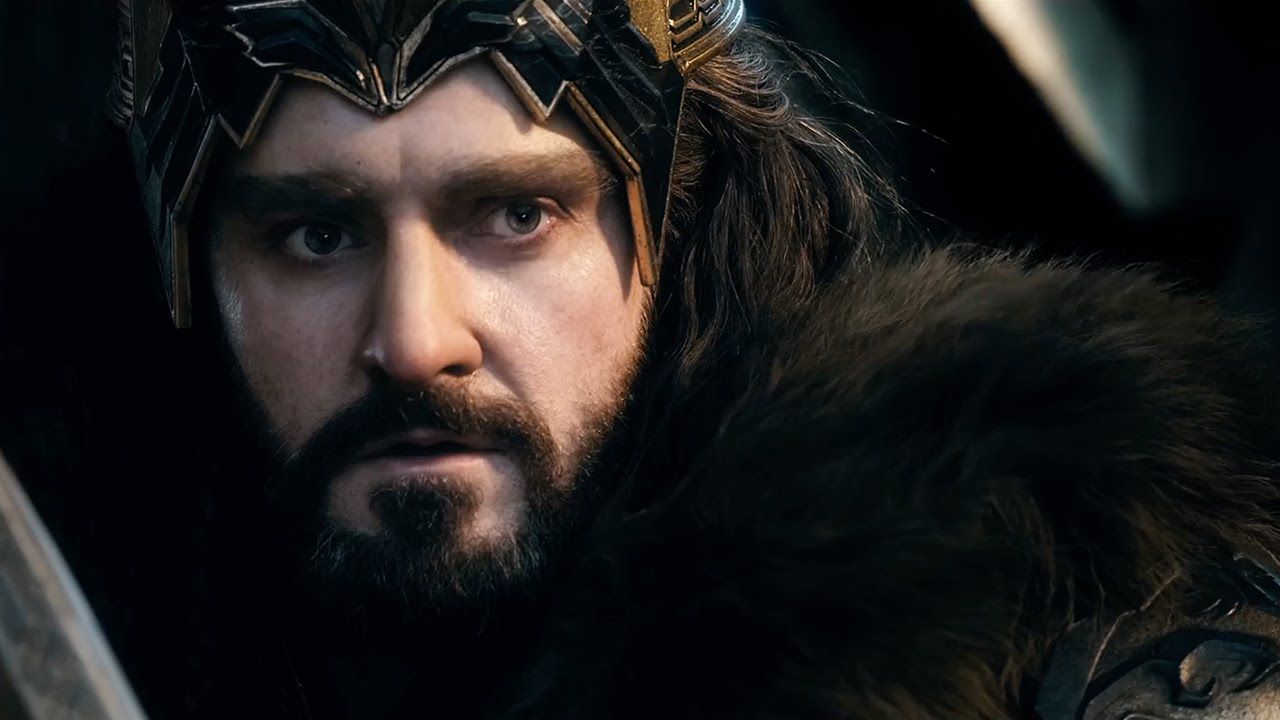 As is unfortunately to be expected with DVD releases these days, The Hobbit: The Battle of Five Armies has a scant amount of extras, with only the short featurette about the relationship between the film series and its spiritual home of New Zealand  being of any real note; packed with interviews with the cast and crew it’s a short EPK that doesn’t really shed all that much light on the production process but is interesting enough to waste five minutes on. Of course, the Blu-ray release will be packed to the brim with supplemental features as always, so consider picking that up instead if you’re interested in learning more about what goes on behind the scenes. 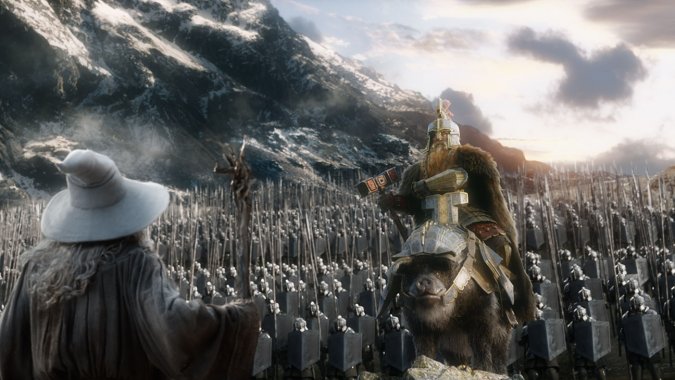 The production design is a sumptuous as ever, even if it all looks a little too pristine when compared to the physical sets of the previous trilogy, but, although enjoyable enough for fans of the series, The Hobbit: The Battle of the Five Armies is relatively slight on any real meaningful story and is instead presented as an action extravaganza, which may be exactly what some fans were asking for but unfortunately left me wanting much more.

The cynic in me suspects that the storyline will be fleshed out more to a certain degree with the inevitable extended edition, making this a bittersweet entry in the series and hard to recommend knowing that fans will be asked to double dip when the often more interesting additional scenes excised from the theatrical cut will be released in a few short months.

Still, if you’re itching to see how the trilogy ends and are longing to return to Tolkien’s fantastical world then The Hobbit: The Battle of the Five Armies will more than satiate your desire, even if it feels like a mere stopgap before the proper version of the film is released. 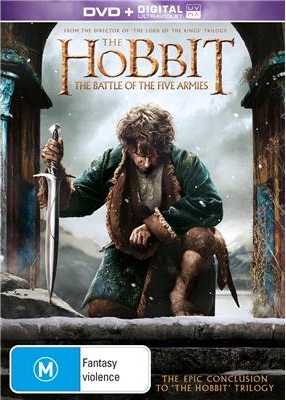