Summary: FIFA 14 is a fun game and will appeal to football fans as the classic style of gameplay, aside from the frenetic tempo of the matches, largely remain and snatching victory from the jaws of defeat still tastes as sweet as ever; it’s just a shame that it all feels so familiar.

There are two constants in this life: Death and a new FIFA game being released each year. Like Christmas you always know that it’s just over the horizon, with the only real question being if it’s going to be any different to last year. Will Uncle Harry drink too much and spew into the punchbowl again? Or will the experience be something familiar yet somehow feel new through the addition of a few major changes?

FIFA 14 is more akin to the former, with no major new features being introduced this time around; instead EA has focused mainly on adding a greater sense of realism to the much loved franchise, with varying degrees of success. 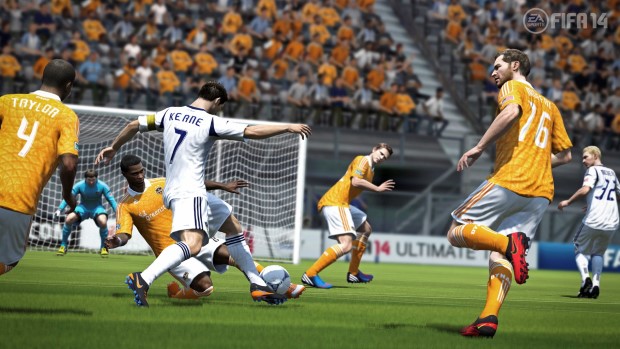 First things first: The pace of the game feels much slower than the furious matches played out in either FIFA 12 or 13; this is due to a myriad of tweaks under the hood of the game engine, including more realistic ball physics, longer stopping distances and the ball not feeling as if it’s glued to your feet when sprinting. This more measured approach also applies to the defensive tactics of both your team and your opponents.

Strategy takes precedence rather than being able to rely on making kamikaze runs up the centre of the pitch, as you’ll soon find the AI boxing you in and effortlessly taking the ball out of your possession. Shooting also feels more akin to the real thing, almost frustratingly so as it replicates the unpredictable trajectory of the arc of your kick. The way the game unfolds now is largely dependent on the player paying close attention to the conditions around them rather than dictating the flow of the game through their actions, a double-edged sword that will delight some players due to the realism and infuriate others who may find themselves having to re-evaluate their playing style to accommodate these changes. 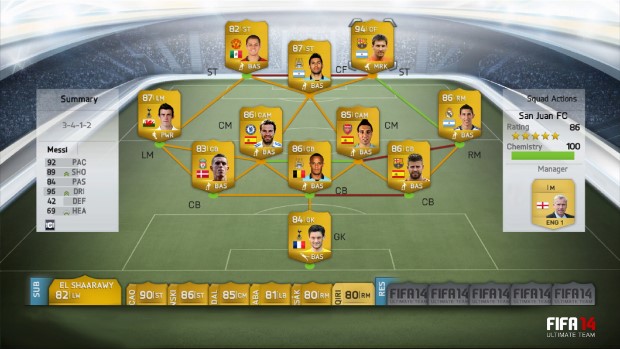 The players move more realistically in FIFA 14, visibly losing balance as they’re jostled or switching direction and actions such as successful passing and shooting are largely dependent on ascertaining these variables and making sure to strike at the right moment. Those who used to revel in sprinting down the pitch will find their momentum halted by standing tackles or surreptitious footwork maneovering the ball out from under them, even if they’re using the right stick to apply some fancy footwork or guarding the ball. The automatic switching between relevant players is satisfactory but more experienced players may want to switch to manual switching as the game does occasionally select a player other than the one in the ideal position.

The animation is fluid and complements the overhauled mechanics nicely, although the graphics can sometimes look a little too pristine and aren’t a great leap forwards from last year. The audio is top of the range, with entertaining commentary tracks that don’t suffer from the repetition that plagued previous entries and accurately convey what’s occurring on screen, for the most part – On occasion the commentators would incorrectly cal a play but these moments were few and far between. The menu screens also have a selection of licensed tracks from artists such as Nine Inch Nails, Bloc Party and Vampire Weekend, which is a nice touch. 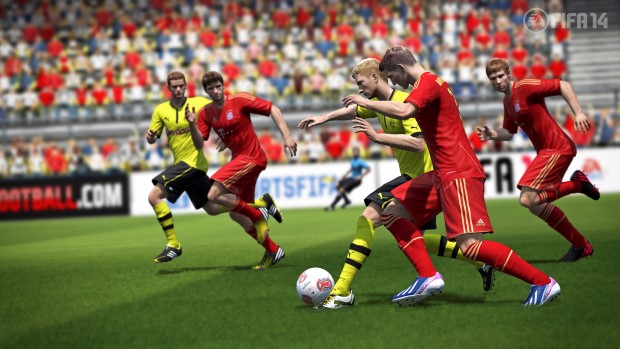 Game modes like Head to Head, Online matches, Ultimate Team and a career component that offers up a comprehensive experience for both those who wish to play manager or follow the rise of a pro through the ranks all return, remaining virtually unchanged from previous iterations but offering a fulfilling experience; as the saying goes, if it isn’t broken, why fix it? Career mode has had a few minor changes, such as the Global Transfer network, which necessitates the use of scouts in finding the top potential additions to the teams rather than just selecting the players with the best overall stats, making team selection a far more engaging and even-handed affair.

A great thing about FIFA 14 is that the real world performance of teams is reflected in the statistics, ever changing to ensure that they’re as up to date as possible. The new tile based selection interface is also a welcome addition, allowing for quick and easy navigation around the menus that feels a lot more intuitive than in previous entries. 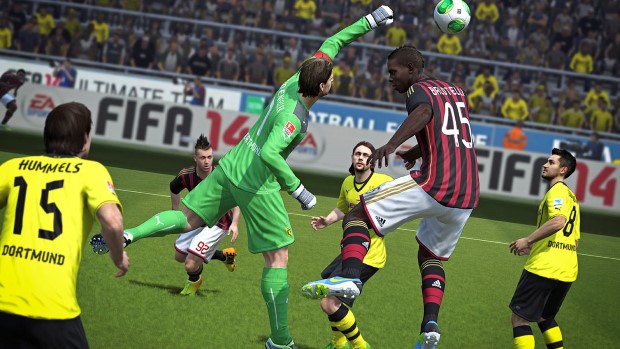 There is a selection of entertaining mini-games you can tackle in order to raise your skill level, covering everything from precision passing to goal shooting; these appear prior to a match loading and are a nice addictive way to fill in the time whilst also adding to your aptitude as a player. 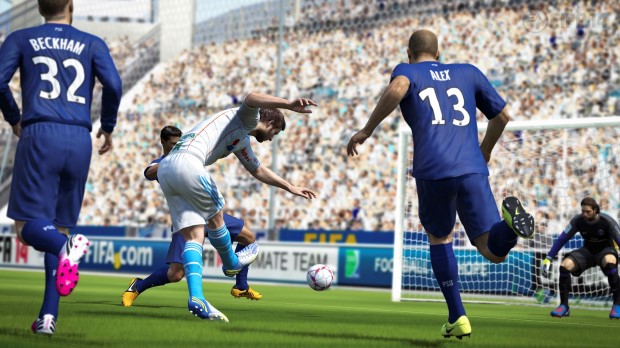 The change of pace will be a sticking point for some players as the game rewards thought out plays and strategy over the run and gun techniques that were so successful in turning the tide in previous entries but in my opinion this change is for the better, with matches in the game now playing out in a closer approximation of its real life counterparts. Quick match makes a welcome return and allows for short blasts of fun for those times where you don’t have hours to spare in order to build your progress.  The quality of the game’s presentation is up there with the best, as is to be expected from one of EA’s most successful franchises and the precision attacks and coordinated maneuvering is extremely satisfying when you manage to pull them off and equally punishing when an ill-advised play ends up blowing up in your face. The control scheme is easy to come to grips with and player movements are incredibly responsive yet the entire system takes time and patience to master before you’re scissor-kicking goals, leading to a balanced affair that makes matches, especially against online opponents, feel much fairer than the one-sided thrashings inexperienced players may have encountered when venturing online in previous titles. 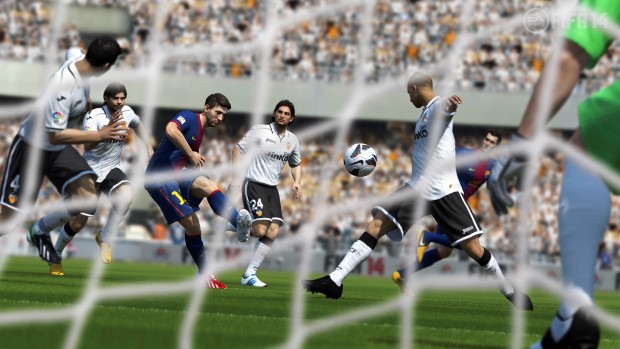 Although a competent entry into the football simulation market, one gets the feeling that EA is holding most of its cards for the upcoming PS4 and Xbox One releases showcasing the new ignite engine, making FIFA 14 feel more like a stopgap affair rather than a full fledged release. The changes to the gameplay mechanics are a bit of a mixed bag and the lack of any major new innovations stop this from being  a must buy. After the powerhouse that was FIFA 12 and, to a lesser degree, FIFA 13, FIFA 14 feels somewhat lacklustre and one gets the sense that EA was really just going through the motions, content with revising a few features rather than reinventing the wheel.

With all that said, FIFA 14 is still a fun game and will appeal to football fans as the classic style of gameplay, aside from the frenetic tempo of the matches, largely remain and snatching victory from the jaws of defeat still tastes as sweet as ever; it’s just a shame that it all feels so familiar.