Eastbound and Down: The Complete Fourth and Final Season DVD Review

Summary: Quickly allaying any fears that this season would be an inferior coda to the story, instead Eastbound and Down’s fourth season emerges as perhaps the strongest and best written yet.

After the conclusion of the third season it seemed like the epic saga of Kenny Powers (Danny McBride) had been nicely tied up, with the character finally realising his dreams of rejoining the big leagues of American Baseball after a lengthy career slump and then throwing it all away again, this time for the noble purpose of raising his son with on again/ off again lover and soul mate April (Katy Mixon).

Even the creators of the series, McBride, Ben Best and Jody Hill (The Foot Fist Way, Observe and Report) stated that they had no further plans for the character; that’s why the announcement of the show’s return for a fourth and final season came as such a surprise. 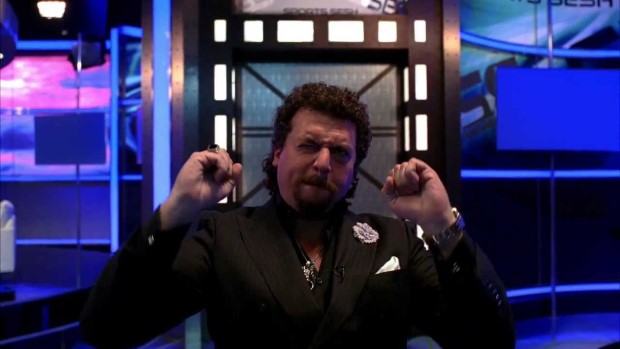 As a long time fan of the series, even I would have to admit that on occasion the quality of the show had been uneven, most prominently during the Mexico set second season, but for the most part Eastbound and Down had been a fairly reliable source of humour and unexpected moments of pathos and the announcement of an additional season made me initially fear that, even if the show was being done to give fans a definitive conclusion rather than merely being a soulless cash grab, the opportunity for taking things in the wrong direction was worrying; After all, how much juice was left to squeeze out of the whole “washed up baseball star seeking redemption” storyline?

Plenty, as it thankfully turns out. 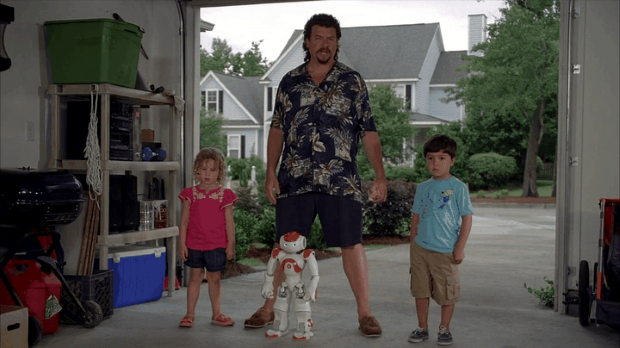 Season 4 of Eastbound and Down is, arguably, the funniest and most accomplished entry yet, showing us a side of Kenny that we never thought possible – The emasculated suburban father. Since the close of the previous season, where Kenny faked his own death in an ill considered attempt to get out of his major league contract, things have majorly changed for our hero: Embittered and neutered, Kenny works in a low paying job at a car rental company whilst April brings in most of the household’s income as a realtor, gaining accolades and awards that serve to only increase Kenny’s resentful discontent.

Instead of partying with fellow sporting stars and snorting blow with hookers, Kenny finds his social circle is now comprised of boring suburbanites like Gene and his sardonic wife Dixie (Tim Heidecker and Jillian Bell) and Kenny finds himself constantly longing for the heady days of fame and fortune. 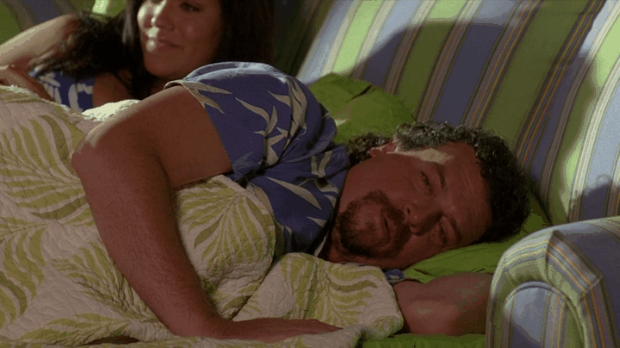 A chance encounter with former teammate Guy Young (Ken Marino) may very well afford Kenny the chance to reclaim his former glory as he’s offered a place on a cable talk show where retired athletes wax lyrical about sports and everything in between, but along with renewed fame comes the re-emergence of the obnoxious and self-centred Kenny fans know and love, much to April’s chagrin and to the detriment of their suburban lifestyle.

The smartest idea this season is to put most of the focus on April and Kenny’s relationship together, showing a bit of a softer side to a character usually only known for his brash bravado and giving Danny McBride a bit more range to add dimension to the character.

Fans will be glad to know that Kenny’s long suffering sidekick Steve Janowski (Steve Little) returns for yet another helping of humiliation, hitching his wagon to Kenny’s star in an attempt to escape his monotonous life as the patriarch of a family that holds him in contempt, but other series regulars like Craig Robinson and Will Ferrell as Ashley Schaeffer have been left out of the story this time around (Probably for the best, in Ferrell’s case, for as much as I love his cartoonishly villainous Schaeffer, another detour like last season’s surreal (But hilarious) slave plantation/ Sex slave Geisha Steve episode would be too bizarre to sit comfortably alongside the more grounded episodes of season 4). 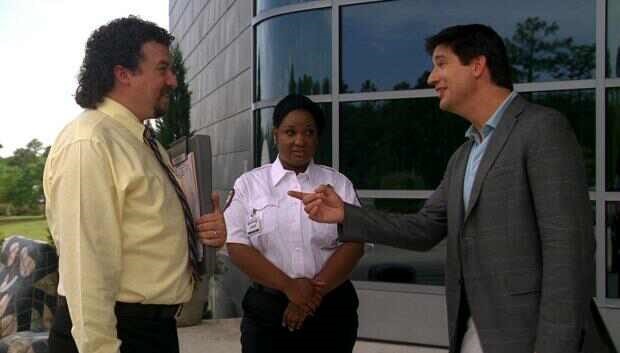 The new additions to the cast work extremely well, with Tim Heidecker playing the role of Glen with a subtlety that will surprise those familiar with his work with Eric Wareheim and Ken Marino plays the duplicitous Guy Young with aplomb, alternately making you despise the character before turning him into a sympathetic figure; this is some of this best work since the days of Party Down. There’s also a few guest cameos that are highly entertaining, including a nearly unrecognisable famous rock star who’s long been a vocal fan of the show.

Warner gives Eastbound and Down a highly proficient transfer that boasts high image detail and top of the range picture and colour balancing for a DVD release. Audio is presented via a Dolby Digital 5.1 soundtrack that is an excellent example of technically proficient sound mastering, with a dynamic mix that is consistent and well balanced and impeccable directionality that belies the show’s humble cable TV origins. 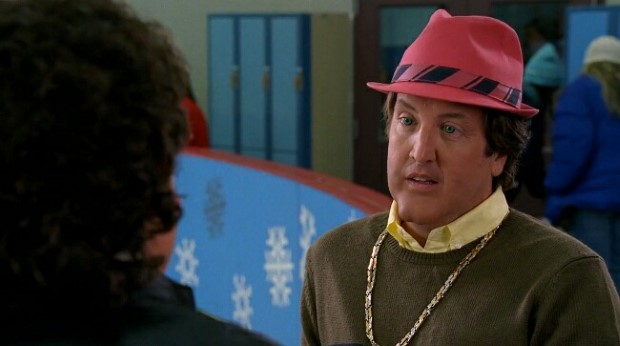 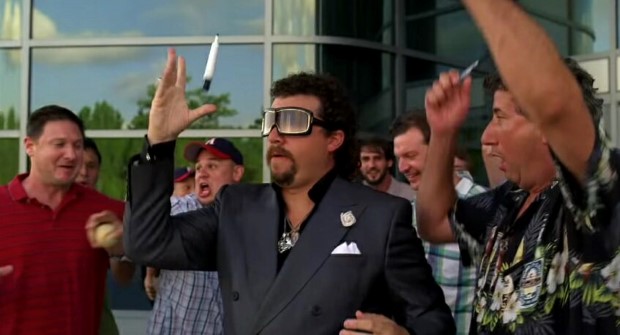 Eastbound and Down: The Complete Fourth and Final Season has a handful of supplemental features that will keep fans amused for an few hours after the credits have rolled, primarily the insightful and amusing commentary tracks, featuring most of the key players and covering everything from the different directions this season could have originally taken, the writing process, anecdotes about the production and more. There’s also a recap of the previous season for newcomers, although it’s incredibly brief and doesn’t really serve to shed that much light on the events that led up to season four, a collection of outtakes and eighteen deleted scenes of variable quality that shed a bit of light on some dropped subplots, such as Glen trying to procure some marijuana from Kenny and some evidence of sexual tension between Guy and April.

Overall a solid collection of extras that offer many more laughs for fans. 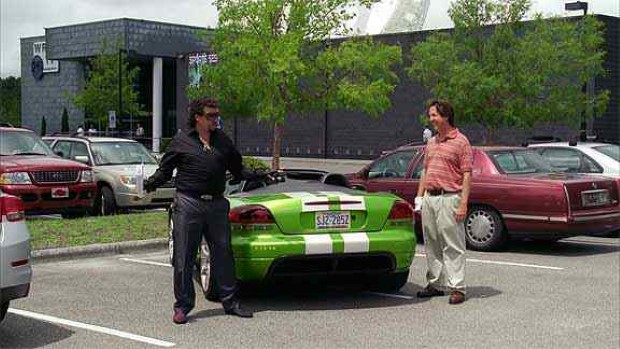 –       Audio Commentary with Cast and Crew on Each Episode 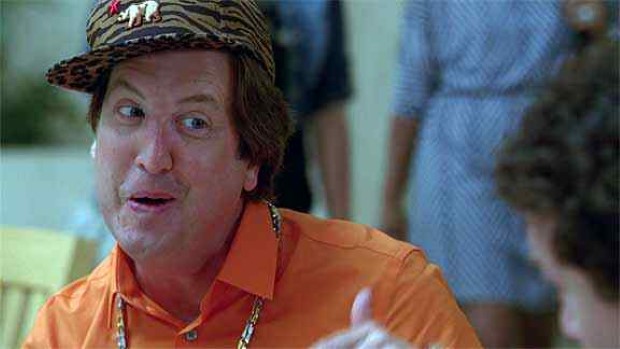 Quickly allaying any fears that this season would be an inferior coda to the story, instead Eastbound and Down’s fourth season emerges as perhaps the strongest and best written yet, offering a nice lease of life for Kenny Powers away from the glitz and glamour of playing professional sports. Some of the plotlines are absolutely hilarious, such as Steve’s transformation and the entire trip to the water park, and the series finale is alternatively poignant and hilarious, particularly the final few minutes, and prove to be the true ending that the series deserved.

If you’ve not enjoyed any of the previous seasons or find McBride’s character to be overbearing and boorish then this season won’t go any way towards changing your mind, but for long time fans this is a welcome return by the one and only Kenny Powers and one that will remind you just how much you’ll miss his politically incorrect ways now that the series finally looks to be completed… For now, at least.