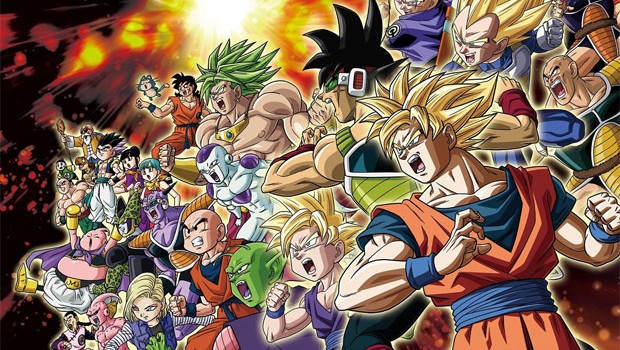 Summary: With plenty of characters to try out, this game packs plenty of punch. 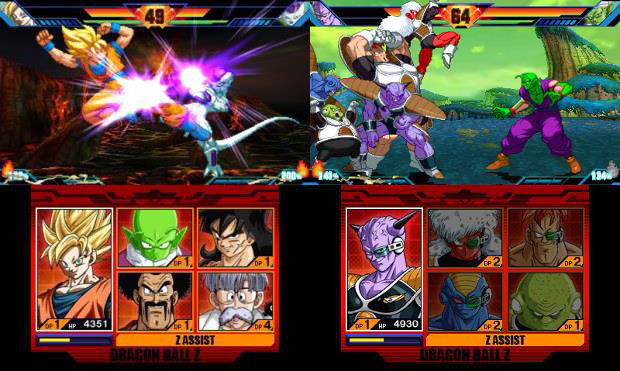 Gameplay consists of one-on-one, hand-to-hand battles, as well as team battles where your team of fighters can tag out with one another to defeat all members of the opposing team. Every fighter has standard combat attacks and special abilities based on the character. A team can comprise of at most five fighters, but a maximum of three fighters are actually controllable. Battles can transition from land to sky with the correct combo move, launching your opponent into the sky or crashing them back to Earth, but this transition doesn’t interrupt or change the battle in any way.

As well as the respectable cast of playable characters, a huge amount of ‘Z Assist’ characters can aid you in the fray. During battle, if you touch a Z Assist character’s icon on the 3DS’s bottom screen that character will jump into battle and attack your rivals. Between the playable fighters and Z Assist fighters there are over 100 characters that can join the fight. Talk about diversity. 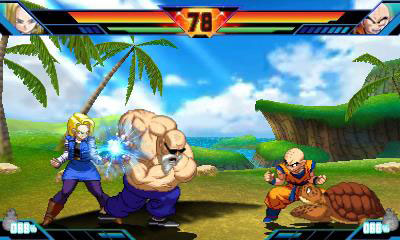 The ‘Z Story’ mode of the game is really a brief introduction to the game mechanics. You get to re-experience an abridged version of Dragon Ball Z and every now and then between the long periods of repetitive dialogue (thankfully, you can skip this) you have yourself a good old fashioned fight. The easy difficulty is perfect for beginners and the half-hour of game play you’ll get from it is a hand-holding tutorial for the Adventure Mode, which you’ll unlock after beating Z Story. Adventure Mode features non-canon storylines where the main goal is to progress in a linear fashion by winning fights- but you can also revisit past locations for more challenging missions.

Of course, free play and multiplayer is a given. In these modes, it’s a straight-up battle with your team of super saiyans. Alternate your fighters for a strategic advantage and take out the other team’s fighters. CPU players aren’t particularly challenging, but battling with a friend is sure to produce a much more intense and balanced game. People with long-distance friends, beware- the questionable lack of online multiplayer is a big flaw of the game. Add to that fact that Butōden doesn’t support Single-Card Download Play, (meaning your nearby friends will need a copy of their own to play with you) and I hope you don’t intend on making this your new source of competitive multiplayer brawling. 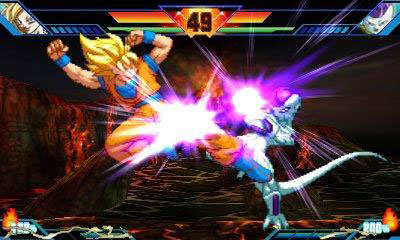 This game is 2D sprite-based. The familiar character designs remain faithful to their depictions in the original Dragon Ball Z. Arena backgrounds are rendered in 3D, but this makes it obvious that the 2D character sprites are flatly placed on top of everything- especially when fighting in the air. The 3D effect is quite minimal in this game. There’s almost no reason to even use it. But that’s not necessarily a bad thing for a 2D fighting game because the 3D effect can be a distraction to players. The music, quite obviously inspired by the music of the anime sets the scene for your battles but most of the music is muffled from poor audio quality. The same applies with the voice acting, which curiously is all still in spoken in Japanese despite the English text translation. 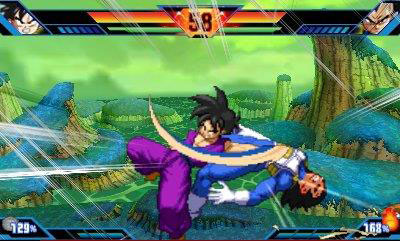 If you can look past the undubbed Japanese voice acting, this game is solid. Traditional fighting games aren’t as common as they used to be but if you’re looking for a fix, Dragon Ball Z: Extreme Butōden will fill the void. This game doesn’t offer anything that any other Dragon Ball game wouldn’t, but it’s the first of its kind on the 3DS, which makes it the ideal Dragon Ball Z game for passing time on the go. On the other hand, the sacrifice of having little support for multiplayer can is a deal breaker for competitive players. But to end this review on a high note- playing this game truly brought back some fond memories.