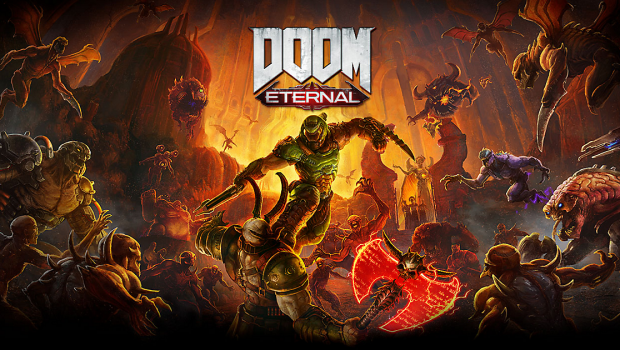 Almost four years since ‘Doom’ graced consoles and computers, here comes ‘Doom Eternal’ to once again stoke the flames of hell. The Doom Slayer is back to do what he does best: unleash oodles of firepower against endless legions of baddies both big…and bigger.

The plot: Set two years after Doom, hell’s finest take over…wipe out much of Earth…and an evil corporation steps in to only make matters worse. The third middle finger comes via corrupted magicians – Hell Priests – that empower the invasion via dark forces. 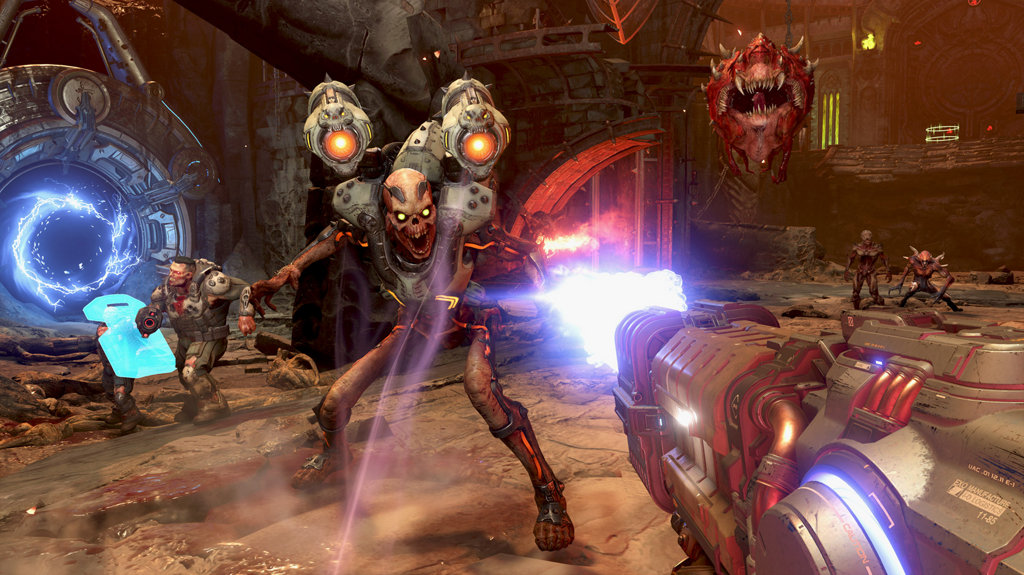 The Doom Slayer, lengthy (decades’ long) resume and all, must now fight through an array of overrun regions to take Earth back. Along the way, discover insane weaponry and modifications to stand a literal better fighting chance.

The stars of the show are the incredible array of demons, a seemingly countless number of bastards that come fast, furious, and are omnipresent. None of these – from lowly zombie to arch bosses – are pushovers. They swarm, are punishing in attacks, and leave little – if any – room for error.

Spoiler alert: even on lower difficulty levels, you will die a lot. Every few minutes, on average. Akin to its predecessor, Doom Eternal stages are comprised of smaller battle arenas; to progress mandates wiping out any and every demon around. Victory seemingly and inevitably arrives on the last bullet, lowest level of health, and with a thumping heart rate from the insanity just endured. Mick Gordon’s heavy metal score is once more along for the ride, a perfect head-banging accompaniment to the maestro mayhem Doom Eternal embraces.

The coolest part of Doom Eternal – despite said mayhem – is that it remains near-perfect, orchestrated chaos. Big weapons produce big effects… but with limited cartridges. Chainsaw kills produce much needed ammo, but its fuel both hard to find and/or regenerates slowly. Glory kills slightly slow down the mayhem…and drop health…but require getting in really close. Moreover, chainsaw attacks slow down the fastest enemies, glory kills are a must for the biggest, and standard ammo ideal for those with primarily distance fire. It’s hell’s version of rock, paper and scissors. 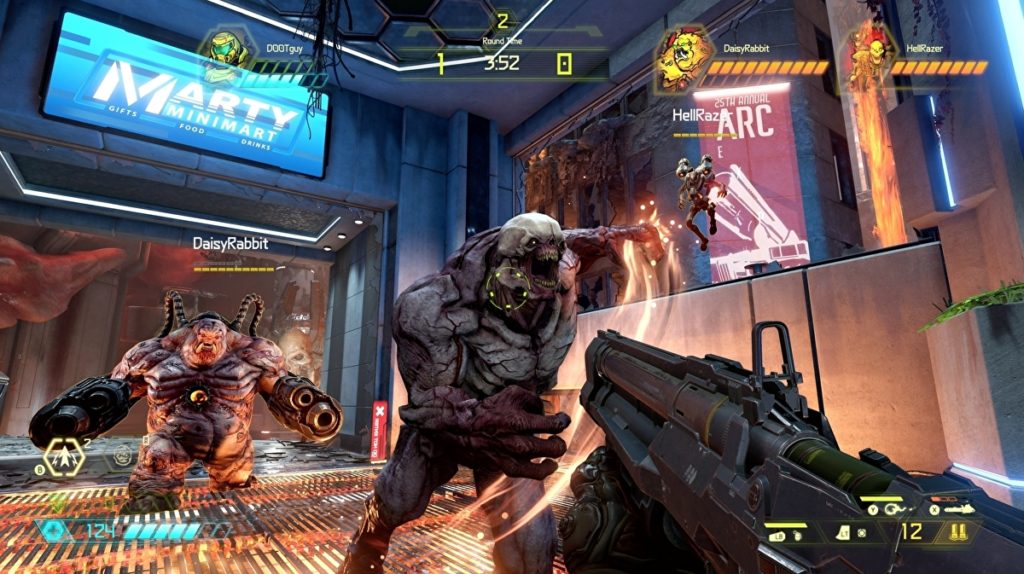 Slowing down is never an option, as enemies will literally hit you from every angle. Cover is just show, thus mastering double jump, turn and shoot, and teleport lifts are vital to survival. Like most first-person shooters, taking down the biggest and baddest should always be first priority, especially as most have ranged attack capability. Picking off the masses to allow freer movement is next, and finally medium/distance guys for the win. Insert a legit boss, throw everything out the window.

Collectively, Doom Eternal is therefore a combat chess match, one that unfolds at lightning fast pace. There’s literally no other game series quite like Doom: a single player centric, extraordinarily difficult, strategic but still frantic, first-person shooter against non-humans. If this is your cup of tea, Doom Eternal is an outstanding Earl Grey.

Amazingly, Doom Eternal cuts no visual corners. Expect no slowdowns, stutters and/or cheap shots from poor programming. (Even if my PS4 Pro’s fans oft-sounded like they were initiating takeoff.)  If there’s one complaint…it’s that the environments are a bit jaggedy. Meaning, it’s common to get stuck in a corner and/or when trying to execute a precise double jump. This delay/failure results in swarms closing in and fast. And…likely death.

Second and if you have a low frustration tolerance, Doom Eternal is not the game for you. It intentionally punishes at every opportunity, and stage completion can feel like luck versus well executed survival. (I’m guilty of thanking random gods when the biggest bad guys got stuck on a jagged corner, allowing timed return fire and ultimately a big kill.) On the flipside, competitive deathmatch players will salivate over Doom Eternal’s highest barrier of difficulty and accompanying challenge. Especially with difficulty cranked up to top levels. Doom Eternal is a streamer’s dream. 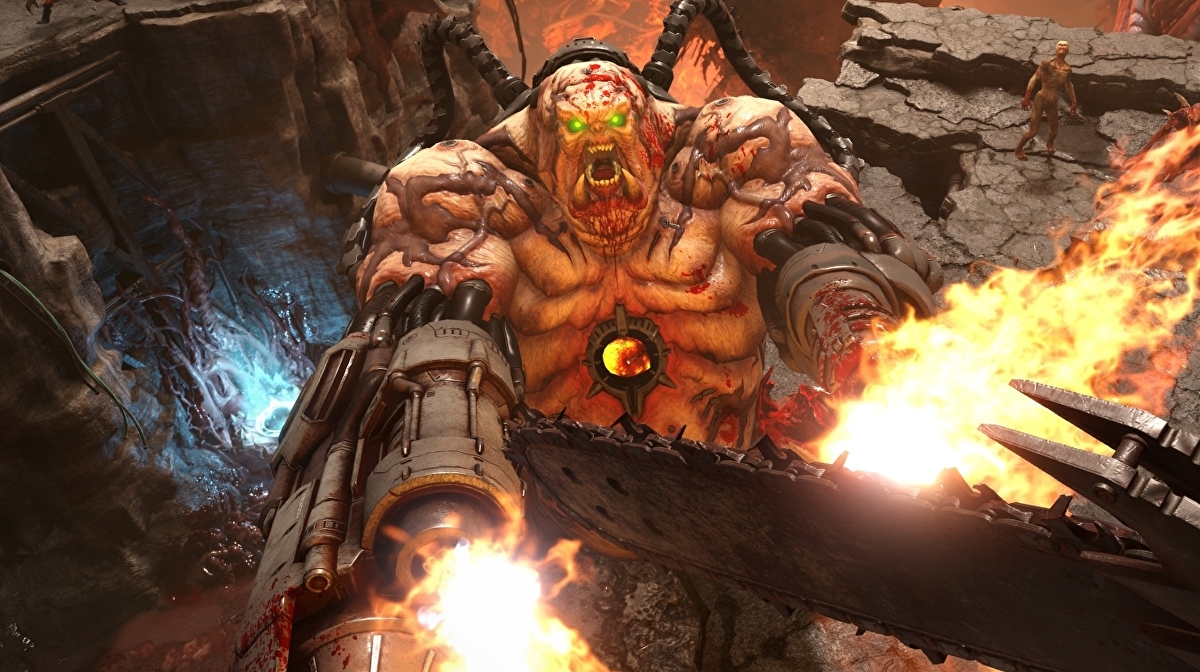 These same deathmatch masters, however, will find little to like in Doom Eternal’s odd multiplayer component. It’s solely comprised of cat versus mouse, two demons against one slayer content. Yes, it’s fun to fill some demon shoes. But this quickly degrades into anti-cathartic monotony.

Doom Eternal does its legacy proud. Unabashedly difficult, frantic, and single player-centric, it knows what it is…and does it well.