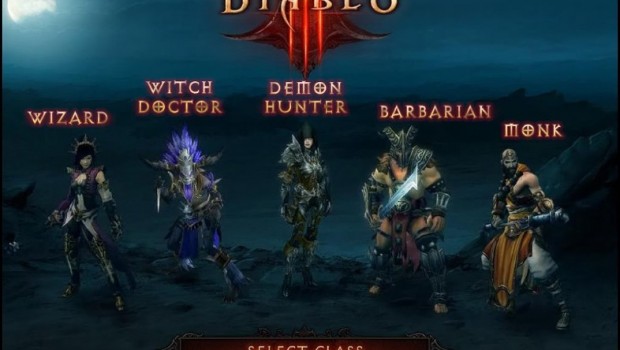 Diablo 3 has successfully made the transition from the PC to the world of consoles and even though Impulse Gamer has reviewed the title on the PC, today we’re checking it out on the PlayStation 3 and before I go on… the conversion is relatively flawless. Given that, Blizzard have really hit the nail on the head in this exciting dungeon controller, especially with the controls on the DualShock controller that just feels perfect. Unlike the point and click version on the PC, the left analog stick is used for direction with the right stick used for directional dodging. This makes the hack ‘n’ slash aspect of the game quite in-depth and not once did I feel out of place while playing this title. The only drawback of the console version is that the inventory tree is a little more fiddly but thankfully Blizzard have included a mass junk/sell function. PlayStation 3 owners also don’t need to create a Battle.Net account and Blizzard have thoughtfully removed the auction house. Well done Blizzard!

In terms of the story, the game adventure for Diablo III takes place in a place called Sanctuary. It’s been many years since un-known heroes quested to defeat the dark forces and save the realms. It all seems to start with a falling star, or at least that’s what it looked like at first. Imagine our surprise when it turned out to be a humanoid being, which has lost their memory and also a sword that was shattered into three parts. Can the addle brained stranger and this sword hold the key to defeating the dark forces that once again rise to cause havoc on the lands? Well gee; you will have to play the game to find that out. I am only here to review the game; I can say that the game was well worth the wait, and the controversy that hangs over it. 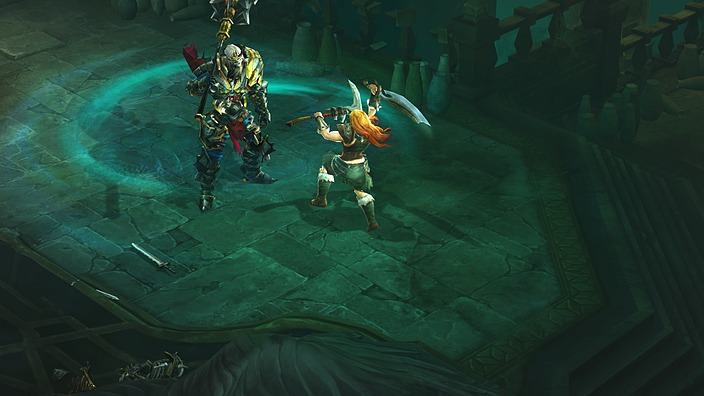 One of the new ones and most interesting ones is The Witch Doctor. With some skills that may remind some of the Necromancer class in some ways. Dealing with magic that can cast curses, summon zombies and use poisons and explosive magic, The Witch Doctor is no slouch in a fight. Though there is some talk that if there are any expansions that the Necromancer class may make an appearance.

Blizzard had reported that this next class. The Barbarian was one of the most widely used by players. So it’s no wonder this walking tank of fighters is present in the game. With skills in battle that can cut a swath through most crowds of enemy, The Barbarian is a ferocious fighter. With skills such as ground stomp, leaping and coming down to crush enemy, cleave and rend and other powerful barbaric moves this fighter class has it all covered. Barbarians use Fury which is generated when enemy attack, or attacking enemy. Fury depletes over time much like Mana for lack of better terms.

The Demon Hunter is a mix of the Assassin and Amazon classes from Diablo II. With wicked skills with a crossbow, they supplement their attack abilities with explosives. With a mix of hatred and discipline fueling their abilities The Demon Hinter is an interesting character class. Discipline is used for defensive abilities and spells and is slow to regenerate. Hatred is used for offensive abilities and spells and is fast regenerating. 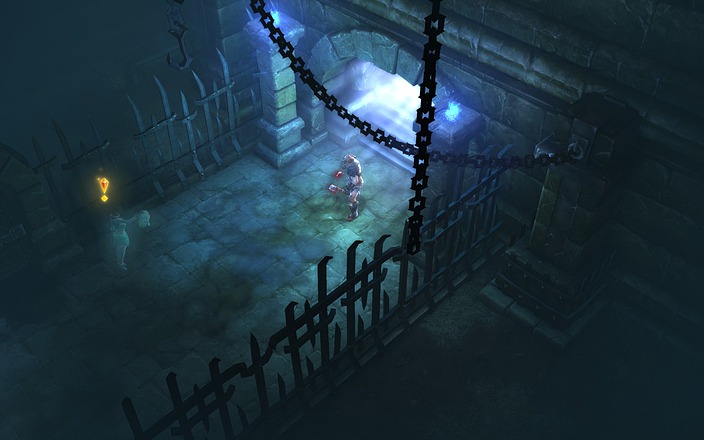 Then there is The Monk. A fighter that uses melee attacks with her or his special brand of martial skills to put the beat down on the enemy. They can resist damage, have explosive concentrated blows, and deflect incoming projectile weapons, kind of an amalgamation of the other games Paladin and an Assassin. The Monk’s abilities are fueled by fighting spirit, which they generate appropriately by fighting.

The Wizard is a new mix of the Sorcerer and Sorceress from the older games from the franchise. The wizard class can do all the ultra-cool spells that are from the tons of story books and film we all grew up with. From electrifyingly devastating lighting attacks, to fire and ice based attacks and the nifty teleportation abilities in the middle of a fight make The Wizard a crafty spell smith of the arcane arts. It’s like the magic of David Copperfield really ticked off.

Game play is once again has been upgraded to a directional control system opposed to the classic point and click version on the PC. Combat can be achieved simply enough by clicking the button to use your melee weapons or spells. Further in the game as you go, there are chances to use the environment to cause damage and stun enemy. Dropping things on them, or knock a stall of burning embers on them. The destructible and using the environments in the attacks are a cool thing used to much advantage on many a dungeon crawl during this review process.

Like most other dungeon crawlers of the same ilk, your character levels up as the game progresses. Gaining skill points as you go. The leveling and skill systems have been narrowed down considerably, some may argue to the point of lack of full customizability. Each class unlocks only a small number and same exact type of skills as they progress. The skills are individualistic per that certain class, but it all comes down to less customization. Eventually as the character levels up and has access to all the abilities of that class, during combat you can change what skill or spell you are using on the fly. Diablo III is less complex than its previous incarnations of the franchise. The spells and abilities can be enhanced by the use of Skill Runes, (Also unlocked as the character progresses) these also can be swapped out and placed on a spell/skill to enhance the effect or benefit in some way.

Playing the single player experience, gamers do not have to go it alone. There are Followers that, well… follow you during your adventure. Happily enough they seem for the most part simplistically competent. The main strategy for the Followers is attempt to kill anything that is a threat.

You can choose skills for them that affect their behavior in combat. Followers that are not chosen for your quest remain in camp waiting for you. Players can head back to town or camp and swap out one Follower for another. As your characters grown in strength and experience, so too does The Followers, they unlock skills every five levels. For best results in combat do not forget to give them the benefit of good equipment. After all it only helps you on your quest to equip them out to best effect against whatever forces you are fighting.

Another NPC style character that your character can invest in to gain better swag is The Artisans. By giving them gold to train up and gain new higher levels of Artisan skills, they are able to create higher grade weapons, armor and other items for you.

As you game through this one, it is soon evident that leveling up is the name of the game. Leveling up means more powerful character and in turn, maybe an easier time against larger bosses. Picking up items, gaining experience, clearing a dungeon out, spreads out the gaming experience and may end up finding out a few things you would not have by just fighting from A to B without checking out all there is to offer in a level. With the games enhanced quest system which does random level generating and encounters along with many of the static levels, it makes some of the game become more interesting to explore even further. 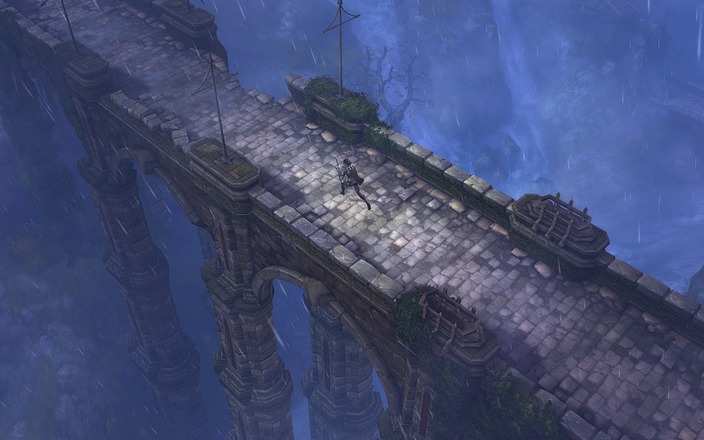 Multiplayer allows up to four players to engage in Diablo 3 with either online or LAN multiplayer. It’s great that you can still team up with random players online. For those players that want to engage in LAN, this can be done but unfortunately the screen does become a little too cluttered, especially when four players are engaged with the game. Single player is fun enough, but there is just something about fighting through the dark unforgiving places with friends and family that just makes it even more fun.

Game sounds and music are thumping enough and lend well to the atmosphere. With a surround sound system players are going to find the sounds of battle ringing load and clear. Graphics are dark and foreboding, with depth to the world, including multi-tiered dungeons. In comparison with the PC, I think Diablo 3 looks better on the PS3 and big is always better.

Though very linear in most respects and repetitive in its battle controls there are enough tweaks in this mostly the same game as Diablo II to make the experience oddly addictive. Diablo III Is a solid sword and sorcery dungeon crawling adventure. Just push the direction you want to go and then hack ‘n’ slash… how simple and fun. A PlayStation 3 success!