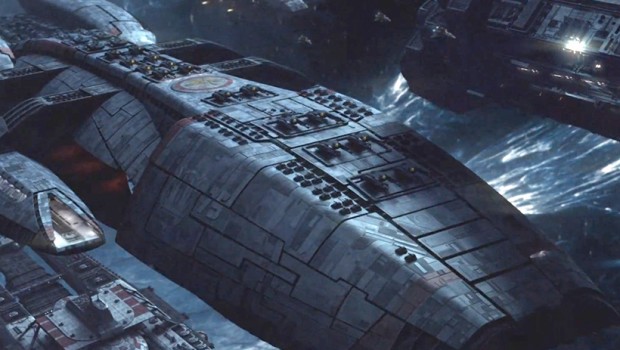 Blood & Chrome takes place in the midst of the first Cylon war. As the battle between humans and their creation, the sentient robotic Cylons, rages across the 12 colonial worlds, a young, talented fighter pilot, William Adama (Pasqualino), finds himself assigned to one of the most powerful battlestars in the Colonial fleet: the Galactica. Though Adama quickly finds himself at odds with his co-pilot, the battle-weary officer Coker (Ben Cotton, Alcatraz), the two men must set their differences aside when a routine escort mission with an enigmatic passenger (Lili Bordán, Silent Witness) turns dangerous and becomes a pivotal one for the desperate fleet.

“We all became responsible the day we created the Cylons, we let them into our lives only to see them repay our trust with a violet revolt against us. In a war where mankind’s very survival hangs in the balance, kill the enemy or be killed.” – William Adama

Exploding with brilliant special effects, don’t miss this new chapter from the Battlestar Galactica saga in Battlestar Gallactica: Blood & Chrome, available to own on Blu-ray™, DVD & Digital UltraViolet™ from November 6, 2014.