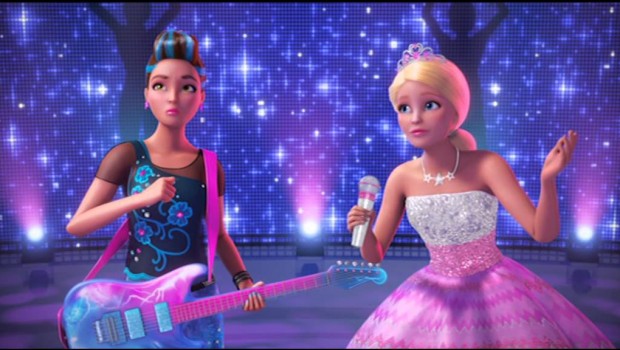 Universal Sony Pictures Home Entertainment is releasing Barbie™ in Rock ‘N Royals – available to own on Blu-ray™, DVD & Digital with UltraViolet™ from September 10, 2015.

Get ready to rock out with Barbie™ in her latest family adventure, Barbie™ in Rock ‘N Royals. In this upbeat musical, Barbie™ stars as Princess Courtney, a modern princess whose world is turned upside down when she switches places with Erika, a famous rockstar. Sing and dance along with Barbie as she finds out what it’s like to be a rockstar.

Two very different worlds collide when a mix-up sends Princess Courtney to Camp Pop and Erika, to Camp Royalty. While the leaders of the rival camps try to correct the mix-up, Courtney and Erika learn to adjust to exciting new worlds and have fun, making some unexpected friendships along the way.

However when the girls learn both camps are at risk of shutting down, they must embrace their differences, find their true voices and come together for an epic sing-off that shows anything is possible when you dare to dream big!

In celebration of the release, Mattel has also introduced a new line of Barbie Rock ‘N Royals dolls and movie soundtrack – available now on CD and Digital download. Visit Barbie.com for fun games, activities and more!