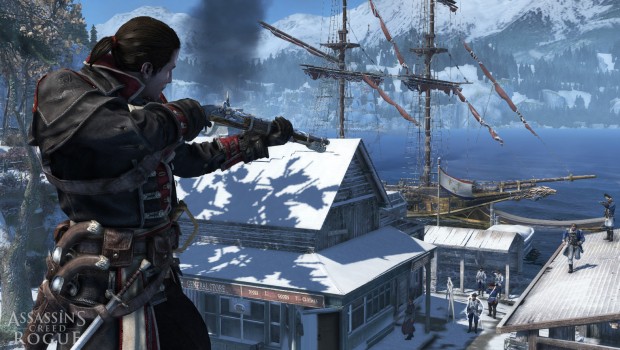 Summary: Play this videogame about playing videogames in order to make the videogame you are playing.

What I loved about the first two Assassin’s Creed games is how the Animus components were inseparably interwoven with the events happening in the present. Altair is tracking down and exterminating Templars; Abstergo is doing the same to Assassins. Desmond is ‘working for’ Vidic, who plans to betray and kill him just as Al Mualim planned to betray and kill Altair. The second game is even clearer: Ezio learns to become an Assassin so that the bleeding effect will teach Desmond how to become an Assassin. But now the Assassin’s Creed franchise has shifted away from the intriguing contemporary science fiction plot—with revisionist history serving as both a backdrop and a foil—and onto an out of control metanarrative using ‘the real world’ as the barest of framing devices. 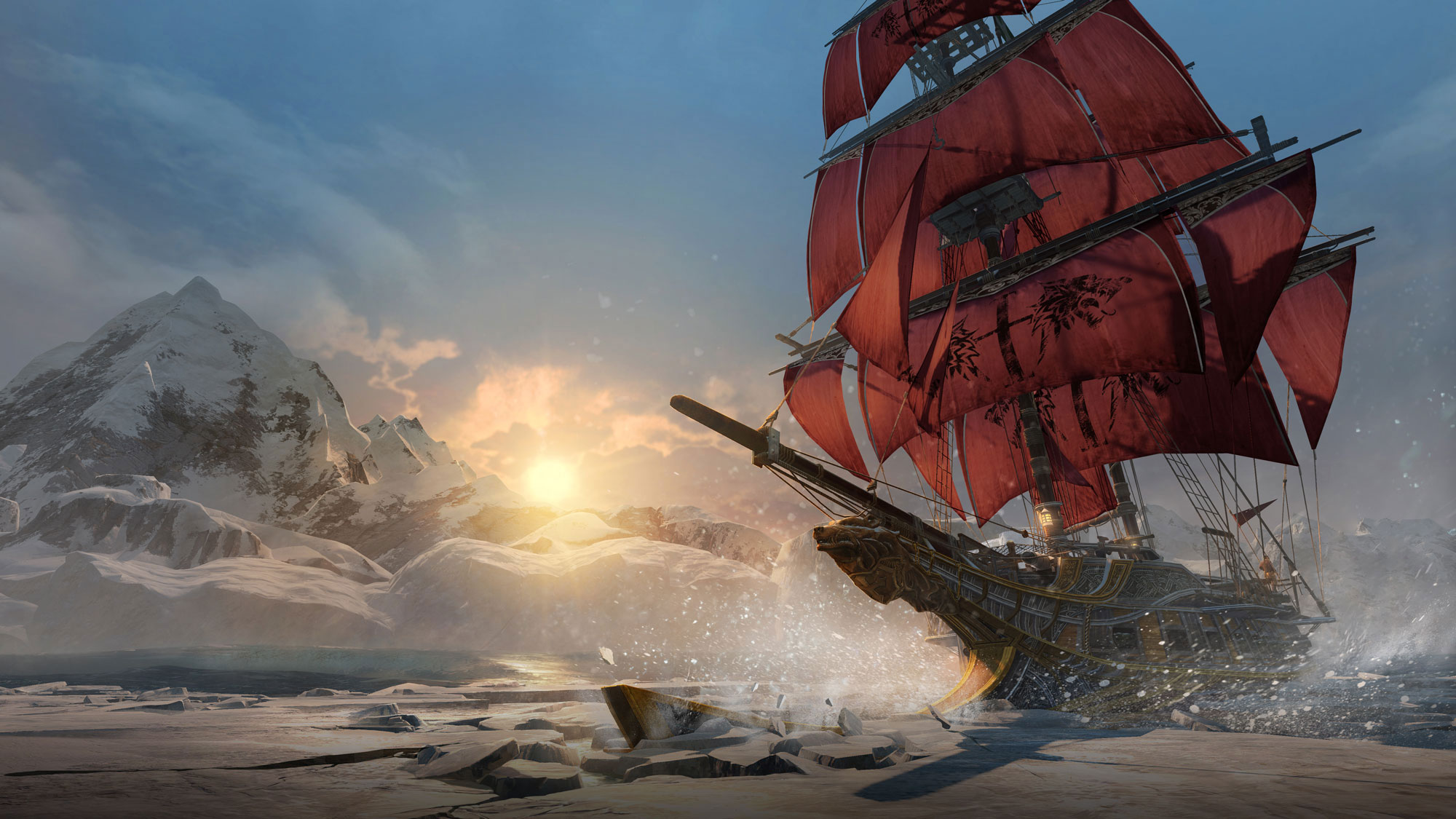 Outside of the Animus, the narrative in Assassin’s Creed Rogue boils down to this: Abstergo Entertainment makes videogames about Assassins. This has the unfortunate implication that Ubisoft is a Templar front, but it also raises all sorts of other meta commentary. One of the emails found while hacking colleagues’ tablets discusses a sequel to Abstergo’s (Assassin’s Creed) Liberation so that they don’t come under fire for lack of female representation. Another email discusses a secret, upcoming project about a man named Arno Dorian set in Revolutionary France—which would have been a far more interesting easter egg had Rogue been scheduled for release first.

The last of the particularly noteworthy emails concerns Edward Kenway, star of Assassin’s Creed IV: Black Flag (or Pirates of Nightmares as it is known in-universe). Melanie Lemay, a high-ranking Abstergo Entertainment employee, wants to use more of Edward Kenway’s genetic memory. She is concerned, however, about giving the impression that the studio is simply reusing the same genetic material as a cash-grab; reusing assets to save money is alright so long as the experience is ‘totally fresh’. 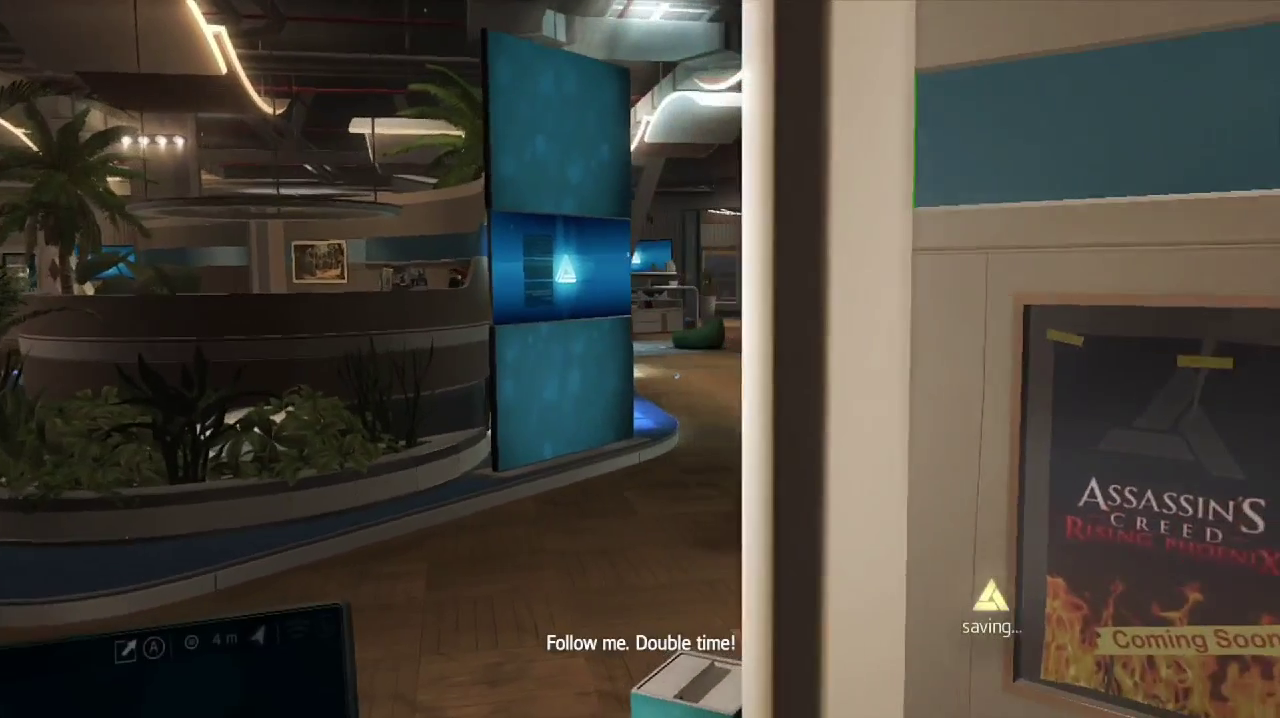 Assassin’s Creed Rogue ‘reuses’ New York, though the city looks both different and nicer than its future counterpart in Assassin’s Creed III. Assets weren’t simply reused in this instance, but the limitations of the PS3 are clearly showing. It is a strangely considerate touch. After all, Rogue is likely the last instalment of the franchise to appear on the previous generation of consoles; not to mention that Rogue was the less publicised sibling of Assassin’s Creed Unity, and was not developed by the lead studio. It would be unsurprising if Rogue was slapped together haphazardly; fortunately, it is not.

But to say that Assassin’s Creed Rogue is a ‘totally fresh’ experience would be inaccurate. There are the same repetitious side activities and an outrageous number of collectibles strewn across the world. (Bar fights and chasing after sea shanties are my two absolute least favourite of these, though the treasure maps were neat.) There’s the same pile of varying weapons and equipment, despite counter-hidden blade or pistol kills being satisfactory. And Rogue continues with the brazen attempt to shoe-horn as many notable events and people from the historical period into the plot—Captain James Cook’s (yeah, the very same) inclusion was perhaps my favourite for being so utterly unnecessary that I couldn’t help but laugh. 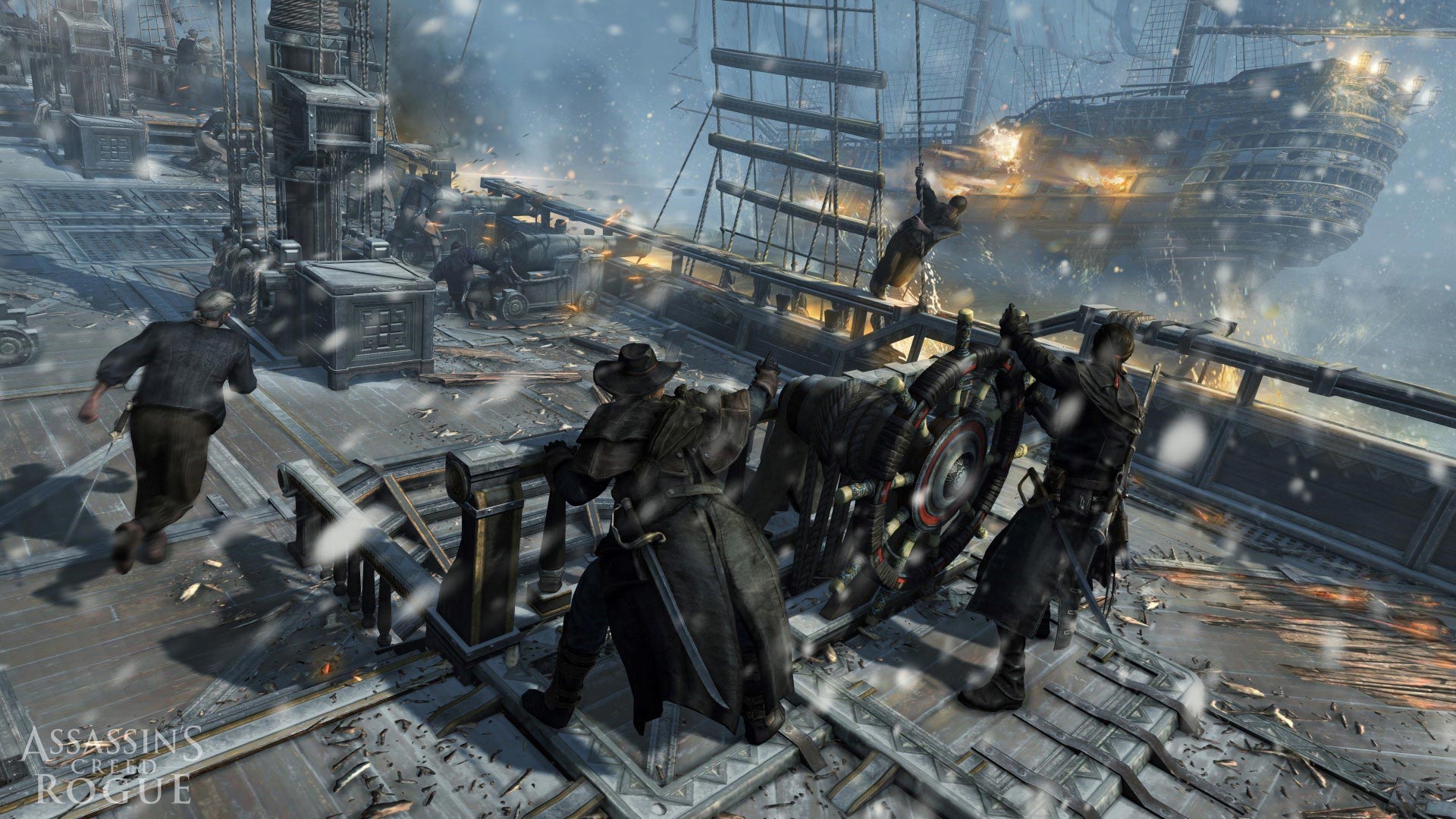 But Rogue is not a terrible game. It’s clearly a formulaic Assassin’s Creed game, but people keep buying these games for a reason. The entire naval experience is superb; I loved ship-to-ship combat and spent a lot of time perfecting my boarding attempts. Disembarking was a constant contest as well—every time I docked, I had to use the rope to swing off and try to land smoothly on the jetty for nothing more than self-satisfaction. As a rogue assassin, protagonist Shay Cormac is equal parts prey and hunter: other assassins will leap off buildings or appear from the trademark Assassin’s Creed hiding places to try and get a quick stab in. There are also assassination interception missions, where Shay scopes out a target and must kill the assassins before they succeed. These are wonderful and helped cover up some of the other flaws.

The biggest of these flaws is that free running is still an excruciatingly temperamental experience. Getting stuck on corners, rope lifts not activating, falling out of trees, and landing two feet to the right of the hay bale—I had constant problems with movement. Assassin’s Creed is about feeling awesome as you sprint across rooftops and stalk along tree branches; I felt like a moron. Only in one circumstance did this not infuriate me: Shay leapt off a rooftop into an elegant dive and landed in the middle of a stone-paved street, far from any water. Hilarious glitch aside, Rogue has serious problems with its movement and it dampens the entire experience. 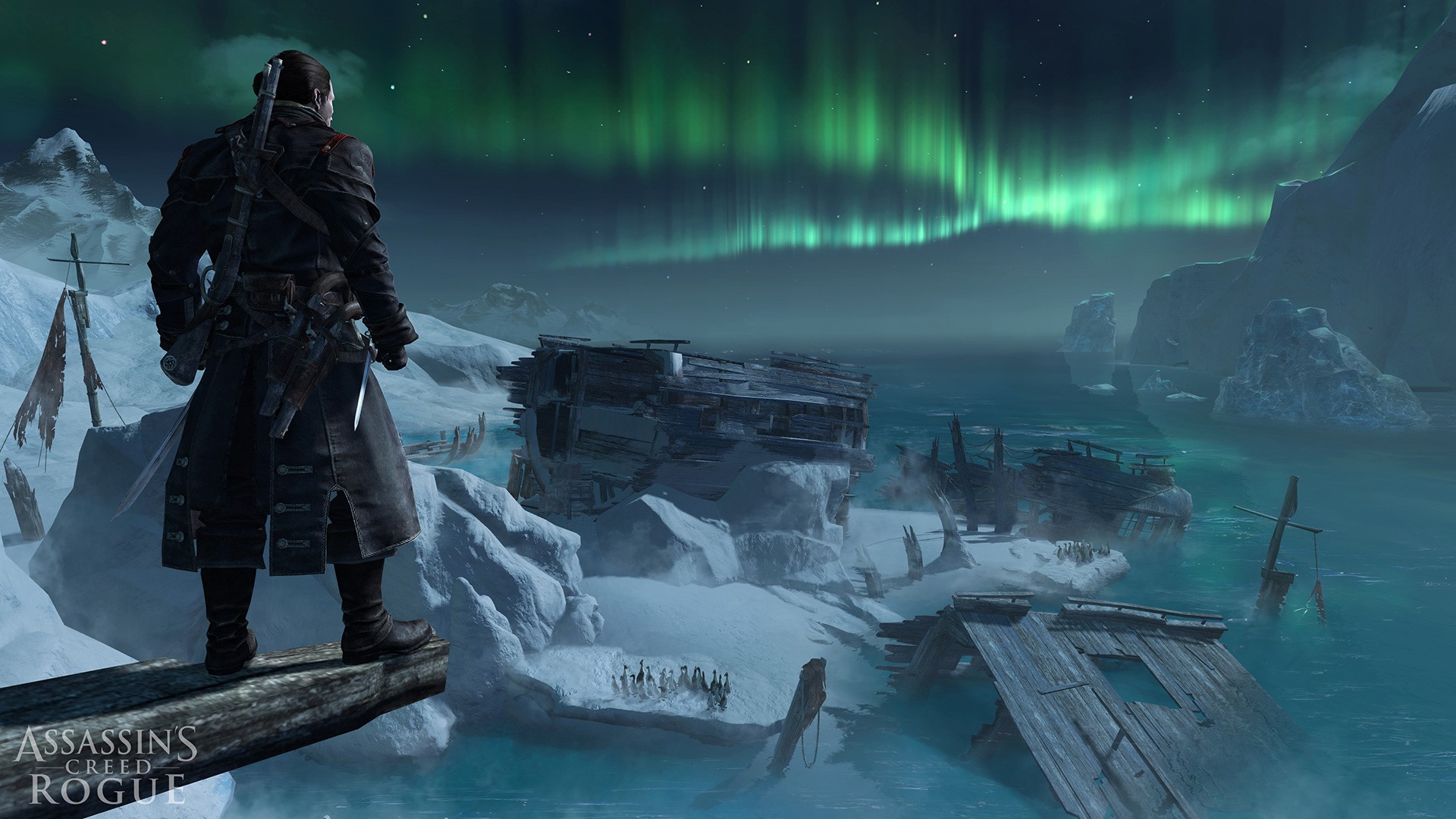 As much as I miss the interesting interplay between the modern day and history, the narrative in Assassin’s Creed Rogue—the one about the rogue Assassin, not the one about an Abstergo employee finding out that they’re going to be murdered and then casually helping their murderous boss anyway—is really interesting. Previously, we’ve seen only how virtuous the Assassins are and how contemptible the Templars are; Rogue expands on the pseudo-prologue of Assassin’s Creed III by presenting the Templars in a positive light, and demonstrating the kind of dishonourable, short-sighted behaviour that caused Shay Cormac to defect, and which ultimately led to the downfall of the North American Brotherhood. No person or organisation is without flaws.

Assassin’s Creed Rogue is not totally fresh. It relies on the same conventions established through the previous seven games—and even performs a core tenet, free running, rather poorly. Rogue has long since departed from the commendable storytelling devices employed in the early games, instead relying on a vague, unobtrusive frame using a generic, incomplete ‘character’ (known only as ‘numbskull’) as the vessel. But Assassin’s Creed Rogue is still (mostly) fun. Hunting Assassins is fun. Listening to sea shanties with your crew and then boarding an enemy ship is fun. Maybe a totally fresh experience isn’t what is needed; maybe this already good experience just needs to be better.