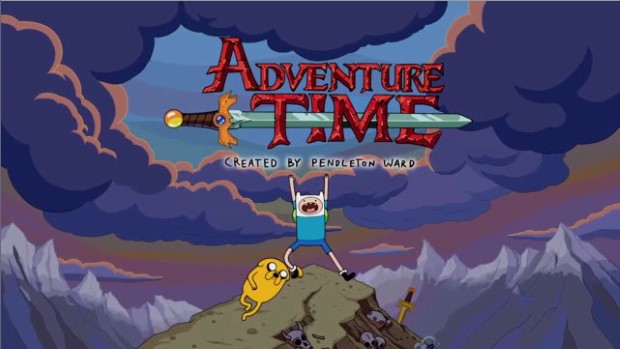 Summary: The deceptively simplistic visual style and random storylines may not be for everyone but if you are so inclined then Adventure Time really is the cream of the crop of children’s programming.

After seemingly an eternity, Pendleton Ward’s delightfully oddball Adventure Time’s second season has finally received a Blu Ray release and the vibrant and quirky visual design of the show has never looked better.

Adventure Time, for those coming in late, is a surreal journey through a post apocalyptic landscape featuring the antics of Finn, the last human boy and his best pal Jake, an anthropomorphic talking dog with the ability to change his shape at will. Residing in the land of Ooo, a realm inhabited by talking candy and all manner of strange, fantasy inspired beasts, each episode sees Finn and Jake embarking on zany and bizarre adventures (Hence the title of the show). 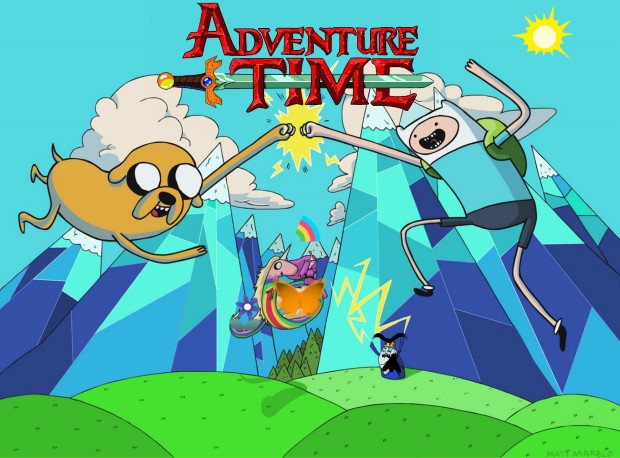 As I mentioned in my review of Madman’s previous release, Fionna and Cake, the esoteric humour of the show really resonated strongly with me, with the aesthetic tone being truly unlike any other show I’ve ever seen, both visually and thematically. As such, I became a massive fan of the show and have subsequently devoured every available compilation set whilst eagerly awaiting the full season releases. With both the first and second season now available on Blu ray I can now finally watch the series in its intended order, for although many of the earlier episodes are self contained, certain episodes such as Finn’s first meeting with Marceline are essential viewing in order to be able to fully understand the trajectory of their unlikely friendship. 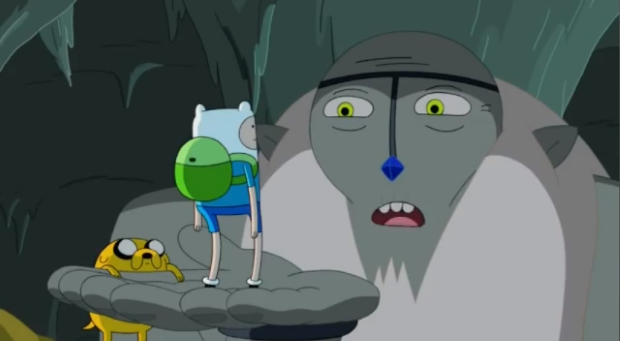 This release collects all 26 episodes of the second season and includes the first major attempt by the writers to add some continuity to the story arcs beginning with the episodes “Mortal Folly” and “Mortal Recoil”, a stylistic choice that becomes more prevalent in later seasons; these episodes also mark the first proper appearance of series antagonist The Lich (Voiced by Ron Perlman), an undead wizard originally featured in a flashback in the episode “His Hero”, whose festering and unmitigated malevolence serves as an inspired counterpoint to the misunderstood – And generally harmless –  Ice King.

Elsewhere these episodes see Finn and Marceline teaming up to put a halt to Marceline’s father’s soul sucking rampage across the Land of Ooo (The Emmy nominated “It Came from the Nightosphere”), Finn and Jake being entrusted with the transportation of the rare delicacies The Royal Tarts, our ubiquitous duo unable to sleep due to being tormented by the unyielding gaze of a strange horse, the return of Tree Trunks in “Crystals Have Power” (The first direct sequel to an episode), and Finn’s discovery of Susan Strong, a hulking behemoth of a woman who may also be, like Finn, a surviving remnant of humanity. 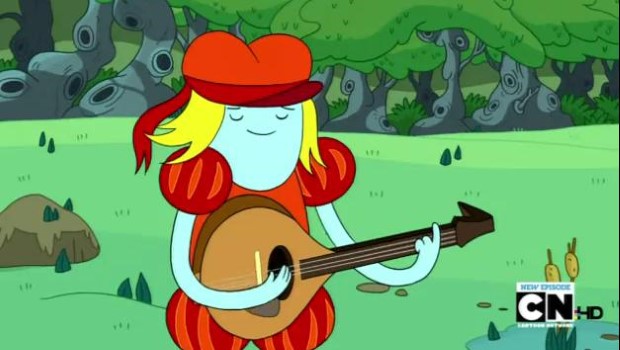 The writing this season is ever more wildly anarchic and inspired than in season one, with the concise storylines often swerving suddenly from an unassuming setup to a wildly inspired descent into madness without missing a beat; the darker facets of the Land of Ooo are even more prevalent this time around, particularly in the episodes featuring The Lich, and the storylines allow the writers to further explore the sobering realisation of the end result of man’s hubris contrasted against the goofy and colourful backdrop and characters of Adventure Time’s fantastical setting. The decision to set the show 1000 years or so after a nuclear war offers a unique vehicle for the dissection of themes usually not present in programming of this ilk and the scripts play around with traditional narrative structure even more so this season.

Madman’s transfer is as impeccable as expected and visually the show has never looked so stunning; the crisp images and gloriously vibrant colours make the DVD releases look faded by comparison. There are a few instances of aliasing on the outlines and some minor banding in darker scenes, but these issues are relatively minor and, considering the amount of content crammed on to one disc, easily forgivable. The audio track only comes in 2.0 Dolby Digital rather than 5.1 surround, which is a bit of a letdown but the track is robust enough and free of errors with even mastering in regards to volume levels. 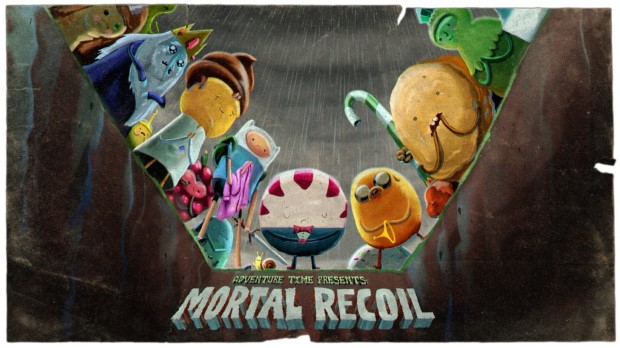 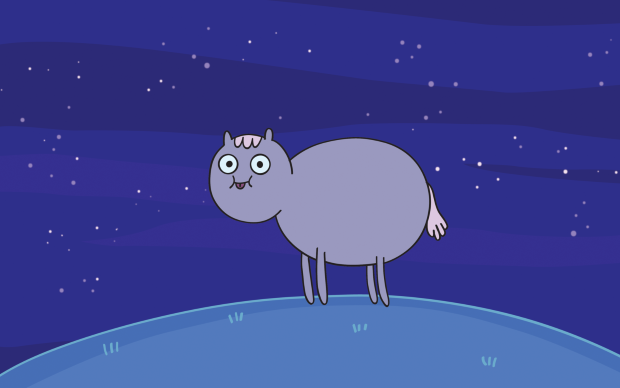 Despite containing commentary on every episode, the special features on this release are a little disappointing, especially when compared to the supplemental features on Season one; the main issue is that Ward has taken it upon himself to cut the content of the commentary tracks, presumably due to them being a tad to risqué for younger viewers in parts, electing to replace entire sections with musical interludes performed on his ukulele. This tends to happen just as a juicy tidbit is about to be revealed, with the audio usually cutting back in to the rapturous laughter of the participants and the viewer left scratching their head in frustration. There are so nice moments that offer some insight into the production design of the show but, for the most part, the commentaries are a bit of a wasted opportunity due to the overabundance of self-censorship. The only other feature of note is a small featurette filmed in Ward’s office that has him interviewing some of the faces from behind the scenes that climaxes with nearly 3 minutes of their reactions to some unseen fart joke being displayed on his computer monitor.

–       Audio Commentary on each episode by Pendleton Ward and crew 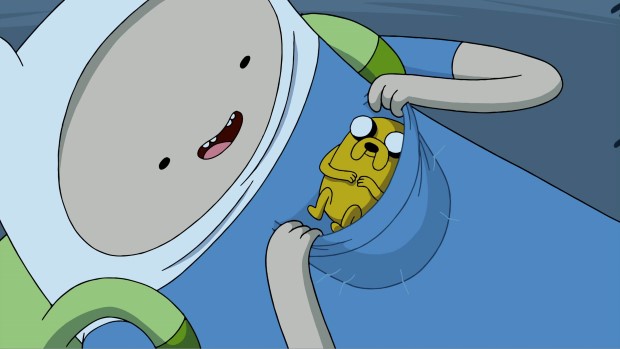 The bright and cheerful veneer of the Land of Ooo hides a much darker history wrought with suffering and destruction that’s unlike anything else on television right now. As I mentioned in my previous review, this twisted aesthetic permeates all aspects of the show, from the storylines to the visual style and, despite the target audience ostensibly being children, it’s the older demographic that will most likely find the most satisfaction from the barely restrained insanity on show here. The additional thread of continuity, particularly in regards to the characterisation, adds an extra dimension to the show and finally having all of the episodes that make up the second season on a single release is certainly a cause for celebration for longtime fans.

This may all seem like effusive praise on my behalf but Adventure Time is truly deserving of all the accolades it receives. Sure, the deceptively simplistic visual style and random storylines may not be for everyone but if you are so inclined then Adventure Time really is the cream of the crop of children’s programming.