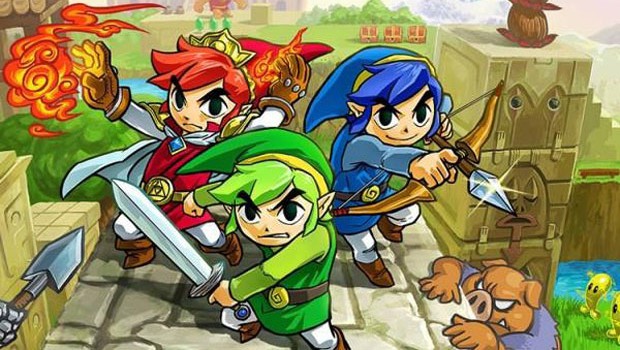 Summary: A fantastic game for playing with friends, but not a game for loners.

While we’ve been waiting for what seems like forever for the elusive Zelda game for the Wii U, Nintendo have offered 3DS owners a little something to keep Zelda fans entertained for just a little while longer. Tri Force Heroes follows in the footsteps of Four Swords and Four Swords Adventures as a Zelda game designed for multiplayer dungeon crawling with the one and only Link- only now there’s more than one of him. When the kingdom of Hytopia is in peril, the King offers a reward for heroic services. When a ton of people come seeking to claim that reward, the real Link (that’s you) must co-operate with the wannabe heroes through treacherous dungeons, forests and caves, solving all kinds of puzzles that you couldn’t on your own. Take your pick of game mode. Online Play, Local Play, Download Play or Single-Player. You can play any way you want and your progress will be recorded regardless of game mode. The game really shines when you’re playing locally with other people, either via Local or Download Play. It’s the only way to really communicate to each other, so it’s perfect for the co-operation that the game demands. If you choose to play online with random players you’ll still be able to communicate through cute poses and actions you can activate with the 3DS’s touch screen. It’s not the most effective way of playing through the game but with time and practice you’ll get the job done. If you’re left with no other option you can always play by yourself. In the stead of two other human players, you can switch between the three heroes to solve puzzles solo. While you can play the game entirely in single-player mode, having to constantly switch between each hero is tiresome and impractical, especially when you have to form a stack of three heroes for reaching high enemies and places while also having to move along the ground. Boss battles become a chore -you might say it’s dangerous to go alone. Single-player mode is definitely not recommended for the most enjoyable experience. But if you do find yourself alone, take a trip to the outfit shop. Your clothes aren’t just a fashion statement, they give you special buffs for your adventures. Tri Force Heroes has plenty of content and replay value. Ordinarily, Zelda games may have six to eight dungeons per game, and past multiplayer Zelda games have barely any content. Tri Force Heroes is quite the opposite, with 32 different levels for your campaign. The diversity of level themes is broad and goes from forests to mines to dungeons. On top of that, each level has three side-goals to complete, adding to a total of 128 missions to keep you and your friend occupied for quite some time as you play and replay them to unlock everything. At the end of each level you can receive a reward item used for crafting new clothes, giving you a reason to keep playing beaten levels for the items you need.

A lot of Tri Force Heroes’ graphical assets are based on the previous 3DS game, A Link Between Worlds, where we have an overhead grid-like view much like that of the early Zelda games. Link himself is actually based on his ‘toon’ design from The Wind Waker. On the 3DS game screen, there is no fault to find. The colours are rich and the environments are highly polished. The music is performed by a live band and captures the whimsical nature that sets this Zelda game apart from the rest. To get the best experience out of this game, you’ve got to have some good friends who’ll play the game with you, which works best when everyone has their own copy of the game so everyone has a reason to play. If you can’t manage that, online play will still get the job done, but if you’re a go-it-alone kind of person then this is not the game for you. This is easily the best multiplayer Zelda game yet and it’s a ton of fun, so I would recommend giving it a chance. Just don’t expect a thrilling, complex story out of this one.