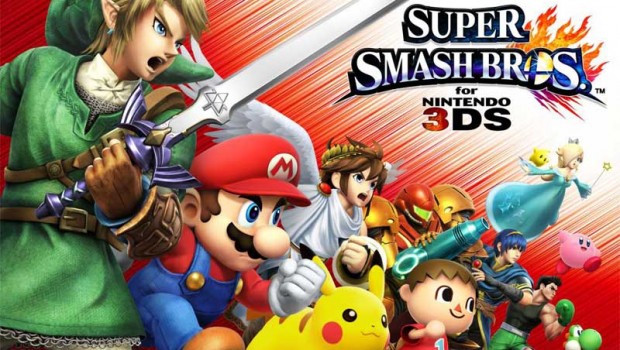 Summary: Mario, Link, Pikachu, Pac-Man, Sonic, Kirby and more come together in a game where they all beat each other up

The Super Smash Bros. series has been one of Nintendo’s cult classics for 15 long years now. And for the first time we’ve been treated to the first handheld- and most versatile- game in the series so far. Super Smash Bros. for Nintendo 3DS is a handheld game that is more than worthy of belonging on a console, with all the pleasure of carrying it with you on the go. Typical Smash fans know what they’re in for; a chaotic 2D fighting game starring a huge cast of popular Nintendo characters with wacky locations and items that rivals Mario Kart. The first handheld Smash Bros. game has an impressive amount of fresh stages and items. While there may not be as many stages as Super Smash Bros. Brawl, the game makes up for it by giving players the largest character roster in the history of the series, upgrading Brawl’s 35 characters to almost 50. The best part about it is that the character roster doesn’t end here- you can now create your own
fighters from your collection of Mii characters! Some concern among fans is that after being a console-exclusive for so long, Smash Bros. as we know it wouldn’t be suited to handhelds. The truth is actually quite the opposite; the ‘pick up and play’ appeal of Smash Bros., if anything was made for the 3DS. The control scheme is as simple to understand as ever, though people dedicated to using the staple GameCube controller probably wouldn’t have such an easy time adapting. With the 3DS you can really feel in control of your characters. The power of the game is impressive as it’s always running at 60 frames per second, so you’re never disrupted by game lag. That is, if you’re playing single player. Playing online can be problematic. Online matches can have serious cases of lag and can even drop out from time to time. Playing with precision is very difficult if you intend to go online, but on the other hand the online features are smartly engineered to cater to those who love to play competitively and carefree with different game modes to specialize in both. While playing offline, you can still set up your own customized game rules such as mode, time, items, damage ratio, and stage selection.

Aside from the traditional gameplay, Super Smash Bros. for Nintendo 3DS also offers a number of side features that you may very well spend more time playing than the main game. The new mode, ‘Smash Run’ takes a leaf from Kirby Air Ride, putting you in a large open arena with a time limit to upgrade your characters to the max for an ultimate deciding match that can specialize in speed, power, skill or jumping ability. Some other mini-game staples return like the ‘Home Run Contest’ where your goal is to see how far you can knock a sandbag with a Baseball Bat and ‘Multi-Man Smash’ where you fight hordes of enemies in a variety of different modes. Unfortunately, there’s no campaign mode like Brawl’s ‘Subspace Emissary’, but Classic mode and All-Star mode return. Both modes are a sort of challenge where you progress through several stages fighting enemies- in Classic mode you have smaller, more varied fights until you progress to the Final Boss, and in All-Star Mode you take on groups of characters at a time until you’ve beaten the full character roster. You’ll pick up plenty of prizes along the way- from gold to trophies to custom attacks for your characters, it’s essential for those who strive for 100% completion. The graphics look wonderfully detailed for a Nintendo handheld, but sometimes things may get a tad too pixelated. There is a lot of detail in the character models but the stages, particularly the ones that are completely two-dimensional like Balloon Fight, Golden Plains and the Pac-Man stage don’t look all that flattering compared to the ones with three-dimensional backgrounds like Rainbow Road and Prism Tower. While some of the compositions sound really great the audio quality itself is less than perfect. Better go with some headphones if you really want nice audio quality. I feel like I’ll be playing Super Smash Bros. for Nintendo 3DS for a long time to come. I’ve been playing this series since the original game for the Nintendo 64 and this game was definitely worth the 15-year wait for a version I can carry around with me. Ultimately, this game is a culmination of Nintendo franchises past and present and it’s a really fun way to become a little more video game culture savvy. Buy this game and I guarantee you’ll have a fun time.