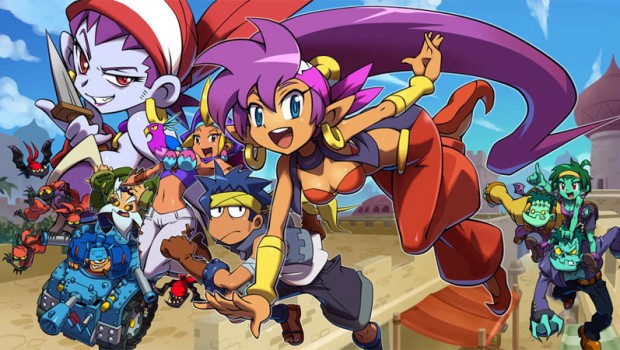 Shantae and the Pirate’s Curse 3DS & Wii U Review

Summary: A light-hearted platformer with plenty of action. A swashbuckling journey awaits you!

Shantae and the Pirate’s Curse is the third game in the Shantae series developed by WayForward and is available on both the Nintendo 3DS and the Wii U. It’s a sandbox-style platformer game that mixes in puzzle solving, strategy-based combat and basic elements from role playing games. The game has a gentle but challenging difficulty curve, addicting gameplay and is accessible for just about anyone. Whether you’ve played either of the previous Shantae games or not, the game is easy to follow and is a great opportunity to familiarize yourself with these obscure but delightful games. The story follows Shantae – a former half-genie- as she teams up with an old nemesis to prevent an evil pirate master’s revival. As you progress through the game you’ll explore six metroidvania-style islands in Sequin Land, each with their own large environment that requires exploration, combat and puzzle solving skills to navigate your way to a dungeon-like den of evil to find new items, face daring bosses, and progress through the game. The game is light on plot but wonderfully written with an abundance of characters, tongue-in-cheek comedy, the occasional breaking of the fourth wall and somewhat racy fan service. What makes Shantae and the Pirate’s Curse such a fun game is while it has the style, flare and difficulty of a retro video game it comes with all the refinements that time has brought to the video game industry. It recaptures the feel of the golden age of video gaming and is improved by new capabilities and new ideas that simply wouldn’t have been possible on old hardware. Unfortunately, unlike various multiplatform games today there’s no way of sharing save data between the Wii U and 3DS versions of the game. For instance, if you have both games and want to pick up where you left off from the Wii U version while you’re on the go, you’re out of luck. So it’s ultimately best to pick one version of the game. There is merit to both Wii U and 3DS versions of the game. The Wii U version of the game displays in high definition and the Wii U Gamepad’s extra buttons can allow for some extra functions that won’t be available in the 3DS version until an update launches to make it compatible with the extra controls on New 3DS consoles or with a Circle Pad Pro for standard 3DS consoles. The 3DS version of the game comes with all the advantages of having a portable version of a game- and it plays identically to the Wii U version only with the added effect of the 3D function. The 3D effect is welcome and gives the game a little extra visual appeal. If I had to pick one, I’d go for the 3DS version but it’s all just a matter of preference. There are a number of small details in the game that you won’t want to ignore. As well as hiding Heart Squids and Cacklebats (collectibles scattered all over the world), many characters have some kind of significance at some point in the game- so talking to people and really listening to what they have to say is a smart idea- even if it’s not necessary to advance. The game rewards players with multiple endings depending on how well they play- which ranges from how much you collect to how fast you finish the game. It does represent a bit of an inconvenience for players who want to see every ending- as they’ll have to play through the game at least four times and it’ll ultimately depend on how the game ranks your performance. Shantae and the Pirate’s Curse features a nostalgic sprite-based art direction like many games from indie developers- but the visuals look sophisticated and colourful enough to call it fresh and modern. I suppose the only let-down in graphics is that the Wii U version of the game uses the same resolution sprites as the 3DS version; only upscaling character artworks and dialogue to a higher resolution. The game’s soundtrack is upbeat and enjoyable to listen to, blending in NES-style chiptunes with synthesized music to compliment the game’s place somewhere between modern and retro video games.

Shantae and the Pirate’s Curse is a fantastic game. It’s a celebration of platformer and role-playing games but it doesn’t particularly attempt to copy other games of either genre. I especially enjoyed how Sequin Land has a sense of connectedness, containing large environments brimming with secrets. It makes the world feel real. It’s certainly a unique experience in gameplay and it is packed with quality content. Once you make it through the first dungeon, you’ll be hooked until the end.