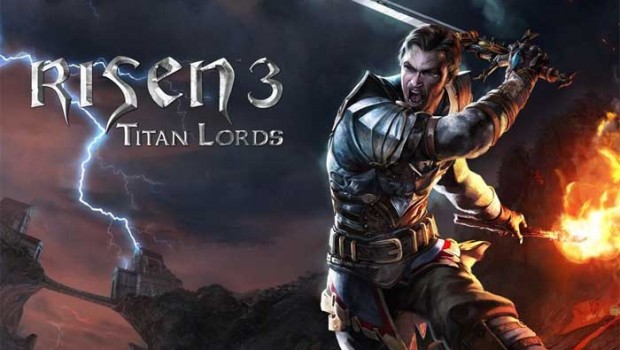 Summary: Ye be better off with scurvy!

The risen series returns with Risen 3: Titan Lords, the follow up to 2012’s Risen 2: Dark Waters. In the latest RPG adventure, you play the son of Captain Steelbeard, a pirate who must reclaim his soul from the underworld after being killed and having it stolen by an evil shadow demon while hunting for treasure on a remote island. Once dead, you are laid to rest on the island by your crew, only to be bought back to life by a mysterious character named Bones and his Voodoo magic. Bones informs you that your soul has been stolen, and that he is willing to help you get it back. However, to regain your soul involves completing a number of quests, scattered across various locations. So is Risen 3 a swashbucklin’ adventure, or does it deserve to be fed to the sharks? Risen 3 opens with two pirate ships engaged in battle, with cannons firing and enemies swinging in and boarding your ship. This scenario sounds exciting and had the sequence been executed well, perhaps it would have been. Instead, the whole thing is a complete mess. Firstly, the graphics are a total abomination for a Playstation 3 title, as is the audio. For a game released at the latter stages of a consoles life, you would expect the presentation to be of a much higher quality. Risen 3 is not only poorly presented for a PS3 title, but it would also struggle to hold its own on the PS2. Unfortunately, the gameplay is no better, as once your ship is boarded by the enemy, you are introduced to the combat system. R2 is block, and X is swing your blade. All of the combat seems very one dimensional and unimaginative. The camera does its best to get into unhelpful positions, all while the frame rate drops at a consistent level. Sadly, these particular issues don’t improve throughout the adventure and in some instances become worse. Screen tear is an ever present nuisance, as is our hero’s gruff, sarcastic voice, which after the first couple of hours, can become rather annoying. Pretty much all the voice acting is of a terrible standard, with each actor sounding rather unenthusiastic towards each line of script they communicate. One scene in particular – when our hero dies – is meant to be a powerful and emotional set piece, but instead you can’t help but cringe at how bad the whole thing is implemented. Arrr! Indeed. After the unspectacular opening, you begin exploring an island with your sister Patty. Together you traverse the island while coming face to face with some of its inhabitants. Giant rats, crabs and an alligator provide you with chance to practice your fighting skills, though none of it gets the heart pumping. The majority of the time the best option is to simply roll on the ground while picking the right moment to strike. Each foe you pit your combat skills against seems to be much faster and stronger than you are, regardless of what it is you are fighting. You can fire your gun at the enemy, but there is no cross hair for aiming, and when you fire at point-blank range and miss, you begin to wonder if all the rum you’ve been downing has not only regained your characters health, but made him completely drunk. As for the AI, Patty being the perfect example, it isn’t particularly good either. There were several moments in combat where she just stood there and watched me get pecked to death by a giant ostrich – like creature. Many of the companions you meet suffer from the same problems. The easiest option in Risen 3 to regain health is to drink rum, which coincidentally I found to be the easiest option for me to drink, to help make the game slightly less painful to sit through. The world in which Risen 3 is set is of a decent size, meaning the islands feel like they are worth exploring, although there is a distinct lack of imagination in their design. Some areas bear a striking resemblance to the previous installment, Risen 2, which may infuriate those who shell out $50 for basically an update of the last game. You can unlock other islands through DLC if you are prepared to pay around $10 for each one. As the story progresses you start new quests, some of which have a bearing to the plot of the game, while others have no real impact on the overall story. For example, you can follow an arrow on your map to a location marked ‘X’ where treasure is buried and dig it up if you feel like it. Additionally, you acquire new attributes throughout the game by completing these quests through an experience system called ‘Glory’. Gaining ‘Glory’ allows you to upgrade your character and become much more effective in combat. Trainers are also scattered throughout the islands, which allow you to learn new skills and make your character much more effective in combat. The upgrade system is a real plus, as you begin to really notice the difference in your characters’ abilities, and combat becomes much more enjoyable and less routine. Later on, you gain access to magic and spells, which again are a welcome addition. There are many unique spells to learn depending on which faction you decide to join: Mages, Demon Hunters or Natives. You can also create your own weapons and potions if you wish. Overall the story should keep you busy for around 20 hours, depending on how involved you want to get with the side quests. Risen 3 Titan Lords is not the dynamic and slick game that it should have been. After Bones resurrects you at the start of the story, he tells you that if you do not regain your soul you will live a “painful existence that will end in damnation”. I liken that line to my experience playing Risen 3. Some of you will enjoy Risen 3, especially if you are fans of the Risen series. But, if this is your first time experiencing the Risen universe, you may wish to spend your money elsewhere. There are some good aspects to the game, the open-world environment and the character upgrade system being examples, but they are few and far between. Overall the bad points, like the horrendous graphics and gameplay, outweigh the good points meaning that Risen 3: Titan Lords deserves to walk the plank.