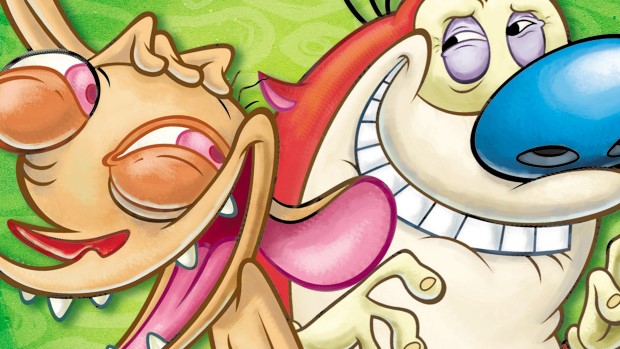 Summary: These episodes showcase a studio at the top of its game and is well worth a look if you have even a casual interest in Western Animation, and fans who’ve already picked up the lacklustre previous releases by Paramount will love the inclusion of the previously unavailable material.

Exploding onto the scene in 1991, The Ren & Stimpy Show was an instant hit, exposing a generation of impressionable youth to the gross out and scatological gags the likes of which had never been seen before on an animated children’s program. Created by outspoken cartoonist John Kricfalusi, Ren and Stimpy captured the zeitgeist and inspired a slew of imitators in its wake, almost singlehandedly establishing the visual aesthetic that would later come to define Nickelodeon, particularly the close up, extremely detailed gross out stills that would later become a staple in 90’s animation. Despite the puerile sensibility of some of the episodes and animation techniques, Ren and Stimpy was also a lovingly crafted throwback to the cartoonist methods of old. John K. once declared that a rule adhered to by the staff of his Spumco animation studio was that they could never repeat either of the main characters facial expressions, leading to the unique and surreal facial contortions that became a hallmark of the show.

Alas, the bubble burst sooner rather than later for The Ren and Stimpy Show, with John K. and Spumco being unceremoniously dismissed from the show nearing the end of its second season due to creative differences with the network, leaving Bob Camp (Co-Founder of Spumco) to take over production with the assistance of Nickelodeon’s in-house Games Animation studio. Unfortunately, without John K.’s steady hand (And inspired insanity) guiding the rudder, the quality of the episodes nosedived and the titular duo quickly fell from grace as their positions were usurped by fresher and edgier programs, many of which were directly inspired by Ren and Stimpy itself. It’s place amongst the pantheon as one of the precursors of gross out comedy, and also simply as a groundbreaking and original animated program, has been somewhat marginalised over the years as it’s been superseded by shows like South Park and Family Guy, but one look at the episodes on release proves that the show, at least in its Spumco years, still holds up well against the zany and esoteric programming that’s become almost de rigueur since the show left our screens after five seasons. As the apex of John K.’s professional career, the episodes contained in this release are the very best the series has to offer, with the differences in style and humour clearly evident when compared to the Bomb Camp years.  The show pretty much subverted every established rule of animation, offering up a pair of unlikeable and abusive dullards with delusions of grandeur as the main protagonists, yet somehow it all worked – Sure, it was sick and creepily bizarre at times (The Walrus, imprisoned by the rubber nipple obsessed Mr. Horse, pleading in a cracked whisper for the duo to “Call the Police!” springs instantly to mind) but it was also pretty damn hilarious. Beyond’s transfer is competent but age hasn’t been kind to Ren and Stimpy in terms of visual quality, with the faded colours and soft image serving to make the show look older than its years. There’s quite a bit of aliasing and some instances of compression, but the colours remain strong and defined for the most part, with no bleed through. These issues don’t reflect the quality of the transfer, however, as the same issue plagued the previous season releases by Paramount, indicating that it’s due to the quality of the source material. The audio is clear and robust though, and despite the minor issue with the image, this is the best The Ren & Stimpy Show has ever looked. –       The Great Outdoors/ The Cat That Laid the Golden Hairball Of most interest to fans will be the addition of many supplemental features from the U.S release that were inexplicably excised from the region 2 and 4 releases, namely the cantankerous commentaries with John K. And Co. and the “banned” episode Man’s Best Friend finally being available to own on home media for the first time outside of the States. The episode features John K.’s blatant swipe at gung ho patriotism, George Liquor, meeting the titular duo and adopting them in order to train them for the dog show featured in the episode of the same name; the reason it was banned? Primarily due to a sequence where Ren deals a savage and protracted beating to liquor using an oar, which evidently was deemed too disturbing for children by the Nickelodeon executives.

The episode itself stands up against some of the best episodes of the John K. run and its inclusion is a great boon for fans, as is the inclusion of the commentary tracks, which makes no effort to conceal the acrimonious relationship between John. K and Nickelodeon. Also included are some pencil tests, storyboards and Spumco image galleries, the uncut episode of Big House Blues that served as the pilot and an interesting featuring detailing the history of the show.

Aside from the featurette and pencil test, none of these special features were included on the previous release by Paramount, making this the definitive Season 1 and 2 collection and offering a tangible incentive for fans to double dip. Although it’s been relegated somewhat to the forgotten annals of animation history, the fact remains upon viewing the classic episodes included in this release that the widespread influence of The Ren & Stimpy Show can be seen in today’s animated programming, laying the groundwork for what was to come. Undeniably juvenile, which may deter some viewers, yet possessing a childlike sense of innocence absent from many of its contemporaries (Which, in turn, may deter those reared on shows like Family Guy), for fans of the show looking for a nostalgic trip back to the 90’s then this is the definitive release of what was undeniably the show’s best period before Bob Camp stepped in and dragged the series into becoming a parody of itself in three short years.

Ironically John K. was later handed back the reins for the much maligned Ren & Stimpy Adult Party Cartoon, which ramped up the gross out gas and homoerotic sexual innuendos to the point of alienating fans, proving that lightning doesn’t always strike twice.

But I digress; these episodes showcase a studio at the top of its game and is well worth a look if you have even a casual interest in Western Animation, and fans who’ve already picked up the lacklustre previous releases by Paramount will love the inclusion of the previously unavailable material.