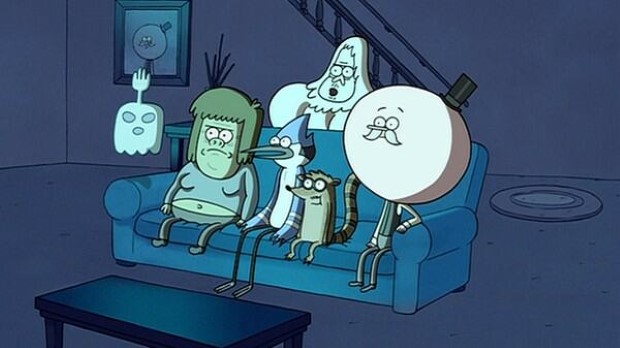 Summary: If you’re a fan of hyperkinetic surreal humour along the lines of the [Adult Swim] line up or Adventure Time then Regular Show should be added to your collection immediately.

Following up their long awaited full release of Regular Show’s first season, Madman bestows us with the zany awesomeness of the show’s much longer second season, bringing fans one step closer to completing their collections rather than having to rely on the compilation discs. There’s really not too much that’s different this time around: Mordecai and Rigby, the anthropomorphic slacker duo, are still being constantly thrust into bizarre situations, the mundane existence of their daily job at the local park frequently taking a turn for the surreal. Along for the ride are the supporting cast of Benson, their long suffering Gumball machine boss, Skips the skipping Yeti with phenomenal strength, Muscle Man and his endless repertoire of “My Mom” jokes and Pops, the lollipop headed owner of the park; basically, if you’re already familiar with the concept of the show, you know what to expect here.

There is a slightly noticeable change in the comic sensibilities of the show when compared to the tamer first season, in that the use of double entendres and mild language is more prevalent; apparently this was at the behest of Cartoon Network, who, realising the generational cross-over potential of the show, decided to allow more freedom to the writers to let them move away from the more child oriented fare of the first season. Thankfully though Regular Show exercises great restraint and doesn’t overdo things, making it remain one of the few programs that can be enjoyed equally by both young and old without any concerns over risqué or subversive humour corrupting the littluns. The 26 episodes included on this disc feature some of my personal favourites in the run, such as the delightfully goofy season opener “Ello Guv’nor”, where Rigby is tormented by nightmares caused by a British horror film featuring a homicidal Taxi that incessantly cackles the title of the episode. Other highlights include the Evil Dead referencing “Grave Sights”, Mordecai and Rigby adopting a troupe of baby ducks, the guys having to team up with Muscle Man and Hi-Five Ghost in order to win a hotted up sports car and Skips challenging Death to an arm wrestling contest for Rigby’s soul in a hilarious reference to the Stallone film Over the Top.

I mentioned in my review of Season 1 that on the rare occasion the writing could come off as a little forced but that’s never really an issue with this release as this far into the run the show has a definite sensibility and tonal framework that the writers know how to work within and the episodes feel more polished and self assured as a result. Madman’s transfer is almost flawless, with the unique character designs and aesthetic of the show looking absolutely beautiful with no evidence of aliasing or compression. Season 1 and 2 are also available as a combined Blu-ray release but I honestly think the difference in image quality would be negligible at best, so crisp and vivid is the picture on this DVD release. After the smorgasboard of extras included on the first season release, it’s a bit disappointing to report that, aside from the commentaries by J.G. Quintel and assorted crew, the only supplemental feature of note is a strange 2 minute video of voice actor Sam Marin singing an unknown song with his mouth blurred, appropriately named “Sam Sings Mystery Karaoke”. Thankfully, if you’re a fan of commentaries, the ones included on this release are as entertaining and insightful as on the previous release and are definitely worth a listen if you’re interested in animation or just looking for an insight into the motivation behind the episodes. Also included are a handful of trailers for other Madman releases.

–       Trailers: Adventure Time Season 2, Ben 10, Regular Show: Slack Pack and Regular Show: The Best DVD in the World *At this Moment in Time Regular Show: The Complete Second Season continues the program’s tradition of crafting surreal situations and referential dialogue that’s made it such a hit amongst young and old alike. If you’re already a self-professed fan of Mordecai and Rigby then you’ll voraciously devour every episode on offer here, and even if this is your first introduction to the show, you’ll find some of the greatest episodes of the run contained upon the release, so it makes for a great touchstone to gauge whether or not Regular Show is your thing.

Personally, I feel that this is the season where the creative team really nailed down the direction of the show and came into a league of their own, which may have something to do with the increased creative freedom afforded by Cartoon Network. If you’re a fan of hyperkinetic surreal humour along the lines of the [Adult Swim] line up or Adventure Time then Regular Show should be added to your collection immediately.