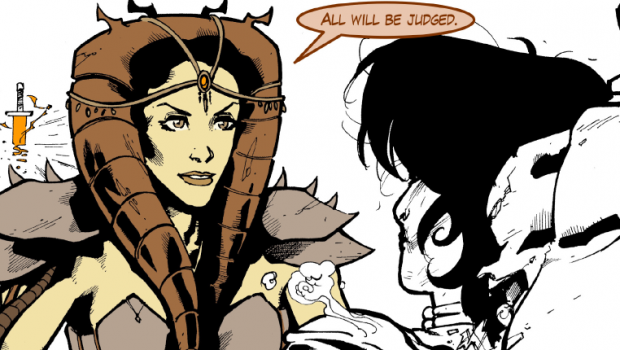 Piotr Czaplarski, the talented artist behind the new indie comic Vengeance, Nevada recently took the time to chat to Impulse Gamer about his personal highlights of working on this series, the challenges he faced, his creative process and much more!

How did you get involved with working on VENGEANCE, NEVADA, and how has this venture been for you personally?

It’s was a couple years ago. I was doing commissions on DeviantArt but I didn’t have much experience with comics at the time. After Brandon ordered some illustrations, he offered me to draw a short story for him, which turned into the first issue of Vengeance, Nevada. It is safe to say that this comic is a complete record of my development as an artist.

What has been the most challenging part of drawing this series?

Actually everything was the most challenging part. I did a lot of figure drawing before, as many of the comic book fans do, but nothing more. I had to learn how to arrange the page and the panels, learn to draw action and dialogue scenes, so there was always that out of the comfort zone feeling. If I had to point out one thing that is hardest for me to draw, it’ll be backgrounds, especially architecture. I have never been good with it and it takes a lot more work to make those buildings look good. What has been a personal highlight for you whilst working on this project?

The whole comic has been a highlight for me. As I mentioned earlier, it’s a record of my learning history, so every page is a milestone for me, another success in one way or another. Because of that I think that the best moment for me was when, after we did the first couple pages, Brandon wrote to me to say that reception was really good and he wants to make it a full length comic book, which later turned into a series. It was a great confidence boost that still keeps me going on giving my best on each page I do.

It’s really simple. After I get the script I sketch the pages in a rather rough manner. We are using them to set the overall looks of the pages. At this point I want to mention that Brandon is really good writer and his scripts are easy to work with. Of course I like to mess with his descriptions from time to time and do things my way and that’s why we use these rough sketches – to settle everything upfront and avoid unnecessary work later. Next comes penciling – the part where most work is done. Since the story takes place in a real world, there’s a lot of reference photos included in this part, and thanks to the XXI century and the internet and Google maps with their street view mode. After Brandon accepts the pencils I go on with inks, colors and finishing touches. Through the series I’ve been experimenting with both digital and traditional techniques but I tend to keep it physical for as long as I can, so I draw and ink the pages on paper and then I scan them, clean up, color and do the lettering on computer. And that’s all, the work is done and we can sit and wait for fame and glory (or get to work on the next issue). What brought you to this moment as a creator, and did you find that living in Poland made it more difficult to break into comics?

Creating comics was my big dream when I was in school, but thanks to my laziness and a couple poor choices I didn’t work on making it happen until I turned 30. After Brandon and I started working on the first pages of Vengeance, Nevada, I realized that I still had that dream and I have to make it real. Of course having a family and day job leaves not much time for drawing, but a huge amount of support from my wife and a lot of hard work (with a bit of insomnia) got me where I am today. And for the second part of your question – no, I don’t think that living in Poland made it harder for me. Thanks to the internet I had access to a lot of tools that I needed to break into comics: the portfolio/community sites (Deviant Art, ArtStation, Instagram, Twitter even Facebook), tutorials and software. Happily for me and a lot of Polish artist that makes comic worldwide, living in Poland isn’t a downside.

The biggest influence on my career has been my wife. She’s a very hard working person, she has everything sorted out and she’s very persistent. She truly is the one to look up to. Also she’s very supportive, which must be hard considering that she didn’t have anything in common with comics. From her I’ve learned how to work hard and smart, so I won’t miss deadlines and how to multitask to boost efficiency. And last but not least – the urge to not let her down after all her faith and trust she put in me was a driving force that can not be underappreciated. Finally, what do you have planned next, and can we expect more?

VENGEANCE, NEVADA in the future?

We are still working on the next Vengeance, Nevada comics and we’re far from the end of the storyline so there will be more for sure. Also there’s the side project we did with Brandon in the meantime – The National Story of Minor Significance which should be available on Comixology soon.