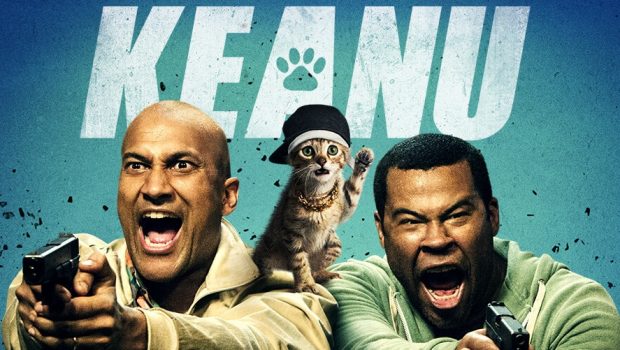 Summary: What better motivation to become a drug dealer than a little pussy.

I haven’t really seen much of Key and Peele before… just the odd clip here and there. To be honest, when the opportunity to review this first came up I had a quick look at the synopsis and gave it a pass… but then I thought… why not? I’m glad I did.

The premise is basically, Rell’s girlfriend has just left him and he is in a funk, his straight laced friend Clarence offers to come around and cheer him up. Before Clarence can arrive, a kitten shows up and Rell falls in love. One night while out seeing a movie, some drug dealers show up and steal the kitten. After finding out who has his kitten, Rell and Clarence hatch a plot to get it back… unfortunately that means pretending to be “gangstas”. The reviews for this online are pretty mixed but I was pleasantly surprised… Key and Peele are not playing stereotypes… well not until they have to act tough… in fact Clarence is the furthest thing from it with Rell telling him “You sound like Richard Pryor doing an impression of a white guy” and I couldn’t have put it better myself.

But it works… it’s silly and over the top and that’s just what it should be. The very start of the movie gives you a fair idea of what to expect. We open on a drug lab, people working at their stations with very few clothes on (I assume to show they won’t steal the drugs?). Suddenly two darkly dressed hitmen show up and all hell breaks loose… bullets flying, people dropping left right and center… and in the middle of it all, a cute kitten runs through the carnage and off into the bright world outside. Rell for his part finds his muse in the adorable kitten by way of creating a limited circulation calendar of the kitten recreating scenes from famous movies Jack with his head through the door with Axe in hand from the Shining probably being the most notable. I had some legitimate moments of laughing out loud (or at least chortling) and it was just the right ticket for a night when I wanted to relax and unwind. I didn’t think I’d even see a kitten wearing a gang bandana… but you know what… it kind of works! As a catalyst for the story (pun intended… hey I’m a dad I can make dad jokes)… Keanu works really well. The naming is also completely logical too… as much as it is indeed taken from Mr Reeves (who has a small cameo) the true meaning of the word is the real inspiration… and much like the little kitty in the film and the way he moves from one place to another… it just works.

Speaking of cameos, Anna Farris shows up unexpectedly… performs unexpectedly in a meta kind of way… but makes more sense in the bigger picture. It is weird in parts… predominantly silly but definitely worth a laugh and a good choice to pick up and watch when you just want to take it easy and have a few giggles.