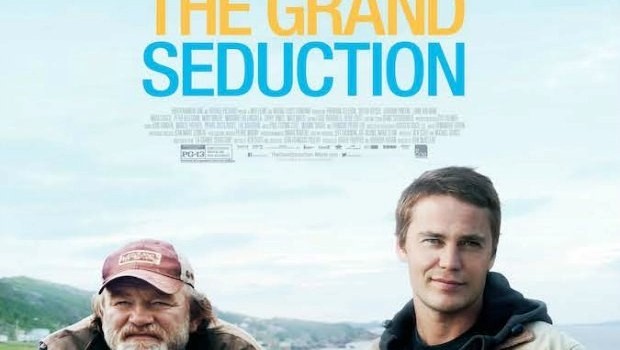 Summary: The Grand Seduction has a quiet unassuming charm that isn’t belied by the minor plot contrivances or thin characterisation.

Directed by Don McKellar (Childstar, Last Night), The Grand Seduction is a charming, warm hearted little comedy film that refreshingly relies more on kooky characters and an amusing central premise rather than puerility, making it the rare film that’s suitable for the entire family (A few light sexual innuendos notwithstanding). Brendan Gleeson (The Guard) plays fisherman Murray French, a proud, salt of the earth kind of fellow who’s recently fallen on hard times due to business drying up in his small town of Tickle Head. Forced to rely upon welfare, when his wife is forced to move to the nearest city in order to provide for them Murray decides he’s had enough and resolves to return the small community back to its former glory.

The town’s former mayor had been in discussions with a major corporation to open a petroleum product recycling factory in Tickle Head and it’s this line of thought the Murray convinces the township to pursue, believing that the countless jobs and new age of prosperity the presence of such a factory will bring to the town more than offsets any environmental concerns.

The petroleum company agrees to build in Tickle Head on two conditions: One – The township offers them a substantial bribe, and Two: They find a doctor willing to agree to permanent residency as there are no medical facilities in town. Murray and the entire town soon conspire to make Tickle Head appear as enticing as possible to young plastic surgeon Paul Lewis (Taylor Kitsch), who finds himself blackmailed into spending what he believes to be a one month period as the town’s doctor due to being caught with Cocaine by the town’s former mayor, now working for customs.

The township works in tandem to create the illusion that the town is perfectly tailored to all of Paul’s wants and desires, which is where most of the comedy springs from. The extent to which the residents of Tickle Head will go to ensnare the hapless doctor border on the downright hilarious, such as tapping his phone,  pretending to be as fanatically fixated on Cricket as the doctor is and changing the menu of the town’s only  restaurant to serve Paul’s favourite food.

The cast perform admirably, with Gleeson as terrific as always and Kitsch going some way to shaking off the stigma attached to him after starring in such colossal bombs as John Carter and Battleship. The eccentric populace is comprised mainly of local Newfoundlanders and this casting decision gives the film an authenticity that would be missing if the cast were filled with a heap of familiar faces. The cinematography is accomplished, especially for such a small independent feature, and the scenery is absolutely gorgeous, evoking the sensation of an isolated little hamlet that’s slowly having its livelihood stripped away. The tone of the film leans more towards such light hearted fare as The Full Monty, making it a refreshing change from the glut of acerbic and vulgar comedies that currently dominate the landscape.

It’s not all rainbows and unicorns though, with The Grand Seduction occasionally falling flat; the plot is kind of flimsy and often relies too much on Deus Ex Machina, especially in regards to getting Paul to the town. Some of the characters are painted in such broad strokes that they surpass even the realm of caricature and aside from Murray, Paul and town resident Simon, none of the characters really get a chance to have their personalities or motivations explored. Aside from these admittedly minor flaws, The Grand Seduction makes for a wholesome night’s viewing that, whilst it may not stick in the memory, certainly doesn’t fail to entertain.

Madman’s transfer is of the utmost quality, with no signs of banding, aliasing or compression noticed throughout the viewing. The audio is robust and dynamic and free from any flaws, making this yet another fine transfer that perfectly complements the quality of the film. The Grand Seduction comes with a disappointingly barebones release, with only a trailer for the film and other Madman releases included on the disc. Brendan Gleeson really steals the show here, displaying the comedic timing and nuanced acting that made him stand out in films like In Bruges and The Guard, a performance that’s bolstered by a naturalistic supporting cast, strong direction from Don McKellar and a script that, despite its structural flaws, is entertaining and replete with whimsical comedic charm that perfectly complements the unique central concept.

The Grand Seduction has a quiet unassuming charm that isn’t belied by the minor plot contrivances or thin characterisation, making it an enjoyable, albeit forgettable, experience that’s well worth checking out for fans of quirky comedies.