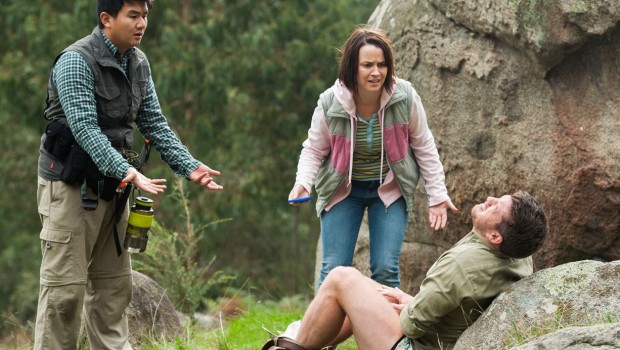 Summary: It's a Date Series 2 is pure comedy gold!

Welcome back to Peter Helliar’s thoroughly entertaining comedy series, It’s a Date that contains a stellar Australian cast as these comedians and actors are thrown into some very unusual, embarrassing and hilarious dating scenarios that will have you laughing in hysterics and cringing in your seat.

Also, Peter Helliar and his on screen wife Lisa McCune serve as bookends for this series with links to some of the other characters that are played out quite well. Without spoiling the series too much, they catch Lisa’s best-friend having sex with Peter’s dad in the lounge room after a very amusing date at a restaurant which included a marriage proposal, food vouchers and performing a “runner”. I really enjoyed these classic moments in this Australian comedy series. Although I’m a newcomer to It’s a Date in that I’ve never watched the original series, the scenarios in each episode are relatively standalone which means anyone can easily jump into the series. Given how much I’ve laughed in season 2, I’ve quickly purchased Season 1 from my local JB Hi-Fi store because this series is true comedy gold.

Like the previous season, each of the episodes in It’s A Date series 2 has a theme such as, is it okay to date a friend’s ex or what are the repercussions when you date on impulse to taking a date to a wedding which created some hilarious moments in that episode. Each episode also focuses on two dates and I also enjoyed how Peter Helliar and co have used both comedians and non comedians to play the role of these characters which creates some thoroughly amusing and memorable moments. Another great moment is seeing Ronny Chieng as Winston and his girlfriend Manda (Emily Taheny) get very ackward during a camping trip due to the stripper-like Ranger whom Manda hires and when he gets bitten by a snake near his groin, Winston reluctantly agrees to “suck” the venom out. With that said, the writing is exceptional in this series and supporting Peter Helliar’s creation are writers such as Lawrence Mooney, Kate Langbroek and Phil Lloyd that really take this premise to a totally new level and to make things worse, some actually hit very close to home. It’s A Date Series 2 is beautifully presented on DVD with exceptional video and audio quality. The writing is pure Australian comedy gold that when linked to this all-star cast of actors and comedians creates one of the best comedian TV series over the last couple of years. Also as this is a 2-disc set, most viewers could easily watch the entire season in 1 or 2 sittings because the comedy is that good!