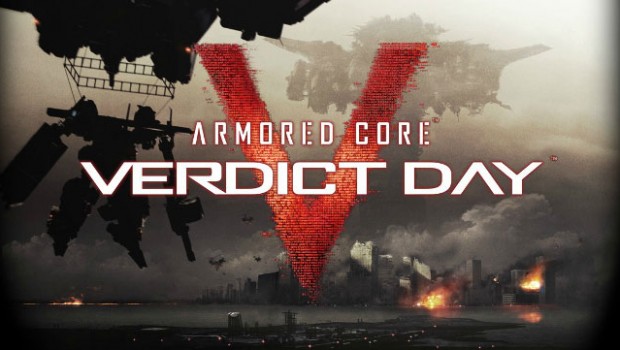 Summary: Armored Core Verdict Day is a standalone add-on for this series that definitely caters for hard-core fans of this title, especially its online component.

Creating the perfect Mech game (especially after the movie Pacific Rim) is a challenge and there’s only been a couple of truly outstanding Mech inspired titles in the console world. The series Armored Core comes close, however there’s always been something missing and their latest addition to the franchise is Verdict Day that attempts to refine the gameplay and focus on the online experience of up to 10 players.

Set in a dystopian future, the player is in charge of the Armored Cores which are Mech-like mechanical machines and requires you to strengthen your faction in order to supports its survival. The cutscenes of the game are quite clichéd and some of the voice acting is bordering on comical but it’s not a game breaker! Although this incarnation is more online focused, you can still play the 60 or so missions in the single-player mode which does allow you to “hire” a mercenary or use one of the virtual UNAC team mates which first need to be unlocked. • 90 new missions across 7 battle ravaged continents
• Choose one of the factions where you belong from three of them and conquer the world together with other players online.
• 600 parts to customize your load out
• Battle alone using A.I allies you have customized against other skilled players evenly with improved online matchmaking
• Use the adaptive A.I to create unmanned ac units to give a command to them as a operator to play the game like RTS

In essence, Armored Core Verdict Day is like an upgrade of game number 5 with a huge focus on online factions and battles. With that in mind, you need to complete a set number of objectives for your particular faction such as enemy engagement, escorting and protection of resources in the gaming environment. Finding players or a faction online is very easy but whether you’ll be good at it is another thing all together.

Unfortunately if you’re a newcomer to the system, the learning curve of this game is relatively high and the menus are not the most comprehensive, however if you are persistent, you should be able to master the game but don’t expect to much help from the game itself. Given that, the story mode of this game works well and the developers have fine tuned the missions to make them shorter and less clunky. Just be careful of the highest difficulty level because this game is not very forgiving at all! Combat however is the highlight of Verdict Day, especially fine tuning your Armored Cores. When you’re controlling these giant mechanical machines, they do feel like a real Mech would feel, especially when it comes to them navigating the gaming environment with some of the Armored Cores almost lumbering. The game even uses adaptive A.I which are computer controlled UNAC’s who even follow basic orders and I must admit they are quite impressive, although a little clunky at times.

The controls are well mapped on the DualShock controller and the biggest incentive to the player is cash. Money can then be used to upgrade your Armored Cores and upgrades are quite detailed, especially the weapon layout of your so called Mechs. Whether you want to target speed, armour or weapons, there’s a plethora of options available to the player but nothing is more fun than making this almost anime like Mech that lumbers around the battlefield fitted to the core with a heavy payload of artillery. It’s all about the missiles baby! Graphically, Armored Core Verdict Day is a very dreary looking game on the PlayStation 3 as everything looks plain and very dystopian with its lack of colours. Even though the planet has been ravaged with war, some additional detail, especially with the backgrounds would have assisted with the overall immersing factor of the game. The soundtrack, although generic helps with the gameplay and the sound effects, especially those of the Armored Cores lends itself well to the title itself. Voice acting as mentioned is unfortunately clichéd and extremely over the top.

Armored Core Verdict Day is a standalone add-on for this series that definitely caters for hard-core fans of this title, especially its online component. The gameplay works well but it is feeling a little dated, especially the graphics of the gaming engine used. However if you’re looking for a relatively comprehensive Mech game, than Armored Core may deliver a nice can of whoop ass as you attempt to liberate the world for your faction.

It’s okay for a Mech game but still has a little way to go.