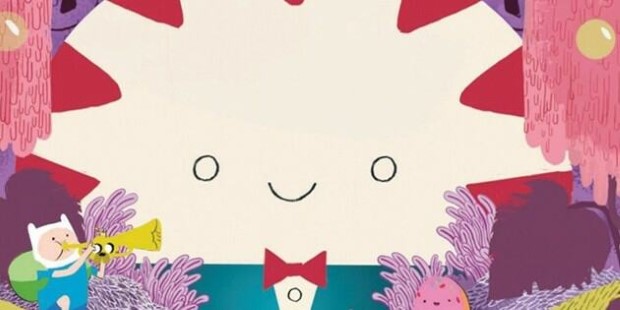 Summary: With its surreal visuals and hyperkinetic pace, Adventure Time combines alternative humour and subversive elements with moments of genuine pathos, making it an enthralling and hilarious viewing experience for adults and children alike.

Adventure Time: The Suitor is the latest in the series of compilation discs that act as a stop gap between the complete season releases of the show; featuring 16 episodes mainly taken from the latter seasons, these releases offer the only opportunity for fans to own certain episodes on home media until the complete seasons are finally released. The main issue most fans with have with these releases is that they really only serve as a grab bag of random episodes, with very little shared themes or attention to continuity, something which has become a lot more important in the series over the last three seasons.

Another thing which may deter some fans is that, although offering a fair selection of unavailable episodes, the latter half of this release is made up of a collection of episodes from the first three seasons, making double-dipping unavoidable for those who already own the complete season releases. Still, I personally don’t mind these collections, as they satisfy my voracious desire for new episodes; these releases seem to be aimed more at the younger demographic of Adventure Time fans who don’t care about the haphazard order of episodes or extra features of note, and these releases allow me to let my little ones watch the show without worrying that they’ll scratch up my complete season collections, although it must be confusing when certain episodes, such as the ones focusing on Marceline and Finn, are presented in reverse chronological order as they are here and seem to show Marceline becoming progressively more hostile towards Finn for unexplained reasons. For those unfamiliar with the delightfully oddball world of Adventure Time, the quick synopsis is that the series follows a young boy named Finn and his adoptive brother, an anthropomorphic, shape shifting dog named Jake, as they embark on bizarre quests set against the backdrop of a post apocalyptic candy world, facing off against giants, demons and all manner of adversaries… Yeah, it’s as quirky and surreal as it sounds and is, in my opinion, one of the most entertaining and visually and thematically unique animated programs on the air today. This collection features episodes which see our intrepid duo meet a physically affectionate Lycanthrope, Finn becoming trapped in the spirit world where his only contact with the outside world is through the kooky Ice King, a peculiar journey through the landscape of Finn’s dreams, a journey to a hidden realm populated only by secretive Wizards, an encounter with a beach ball riding horse named James Baxter and much, much more.

One aspect of this release that may constitute as kind of a thematic link between certain episodes is the focus on Princess Bubblegum and Marceline the Vampire Queen, with the titular episode seeing a prospective suitor named Braco attempting to woo a disinterested PB and Sky Witch further expanding upon the back story between PB and Marceline and their previously close relationship (Some have even speculated that this relationship may not have been platonic in nature). One thing that becomes evident by watching the more recent episodes is the refined quality of the writing and the often darker storylines when compared to the more off-the-wall efforts of the first few seasons. Mixed in amongst the goofy hi-jinks there is a level of emotional resonance and subversive humour that is missing from the show’s contemporaries.

The 1.78:1 anamorphic visual transfer is serviceable with no visible signs of compression or aliasing. The colours are bright and lines are generally well defined, although there are moments where they can become a tad soft. The audio track is, yet again, presented only in Dolby 2.0, which is a little disappointing but doesn’t affect the viewing experience all that much, aside from sounding less dynamic. As has become common with these releases, the only feature of note is the Little Did You Know feature, basically brief blocks of text describing characters unique to the episodes included. Aside from a few trailers for other Madman releases, The Suitor is a relatively bare bones affair, although the DVD does come with a reversible cover, which is a nice touch. Featuring one of the funniest episodes in the show’s entire run – James Baxter The Horse – and a nice collection of sharply written episodes that further expand upon characters like Marceline, Princess Bubblegum, BMO and Peppermint Butler (Who’s beginning to look more and more like a sociopathic dabbler in the dark arts in stark contrast to his previous appearances as a jolly servant), Adventure Time: The Suitor will more than tide fans over until the next fully fledged release.

With its surreal visuals and hyperkinetic pace, Adventure Time combines alternative humour and subversive elements with moments of genuine pathos, making it an enthralling and hilarious viewing experience for adults and children alike.