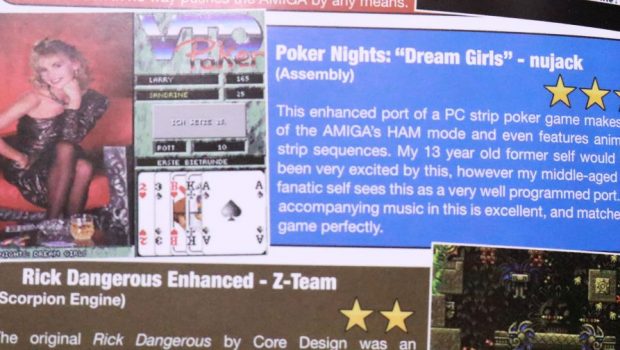 Summary: Worth a look for fans of the Amiga or even if you have heard of this system and want to know more about it.

This annual was also a part of the Kickstarter for all the annuals that I got as part of a early pledge in one go. The previous year I had gotten the preview issue but had decided against going for the bi-monthly release as due to shipping issues from the UK it would take many months to reach me like happened in the 1990s when I was buying magazines originally.

The Amiga was pushed as one of the best gaming systems and computers back in the day but I hardly knew anyone who had one.  PCs were around then but were mainly for business and very expensive. I had wanted to get an Amiga but ended up getting a Sega Megadrive instead.

From what I remember the Amiga had a lot more adult-style games on it and they do go into it somewhat with the creative areas like the demo scene and Amiga party culture. The main focus is still on games it seems.

There are still new games being made for the machine and also they go into the recently (at the time) release of the A500 Mini as the system had always been kind of a pain to emulate and a lot of people preferred using the original hardware. Those are getting more difficult to find these days but at the time the system was not really rare.

I do like that they split up the sections like the Bullfrog interview and the reviews so it is not all the same in a big block, which would make it a slog to get through.

Hopefully in the next issue they go more into the music and demos scene as there is still a big culture around it in Europe and until a few years ago there was a chiptunes music festival in Australia.

Well worth it if you are a fan of the Amiga or want to find out more about the history of it and did not follow it at the time.

The Launch of Amiga Force

The Time I Visited the CD32 Launch

Steampunk Amiga and Its Creator

The Making of Reshoot Proxima 3

Wiz – Quest for the Magic Lantern