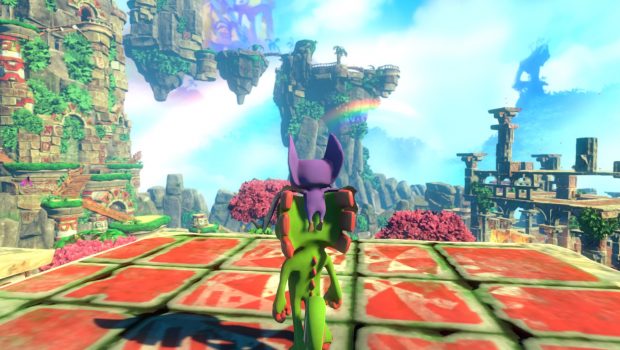 Summary: Though a beautiful callback to a nostalgic genre, Yooka-Laylee is lacking in some areas that were difficult to forgive.

Yooka-Laylee is the spiritual successor to Banjo-Kazooie, which was first released in 1998. This game shares more than just a title based on lead characters named after instruments; Yooka-Laylee is the classic 3D platformer of our youth. Or at least, it tries to be.

As I played Yooka-Laylee, one thing kept distracting me from the vibrant scenery: the entire game just seems a little confused. In some ways, the game is trying to fill the 3D platformer void, allowing the next generation to love Yooka and Laylee the way my generation loves Banjo and Kazooie. However, Yooka-Laylee has not forgotten the nostalgia-fueled adults who helped bring the game to life by handing over their hard-earned cash via Kickstarter.

Yooka-Laylee’s attempts to navigate this dual audience reminds me of Ratchet and Clank (2016), which I reviewed last year. While Ratchet and Clank attempted to solve this dilemma by including surprisingly challenging mechanics alongside painfully childish jokes, Yooka-Laylee places simplistic and difficult tasks alongside each other, while also featuring an awkward mix of both childish and adult humour. Despite childlike elements like the main collectibles being called ‘Pagies’, most of the jokes—like breaking-the-fourth-wall to talk about game tutorials and quality assurance—are clearly designed for an older audience. Other jokes—like the one where Laylee fat-shames a knight who also happens to be a pig—are jarringly and unnecessarily insulting. 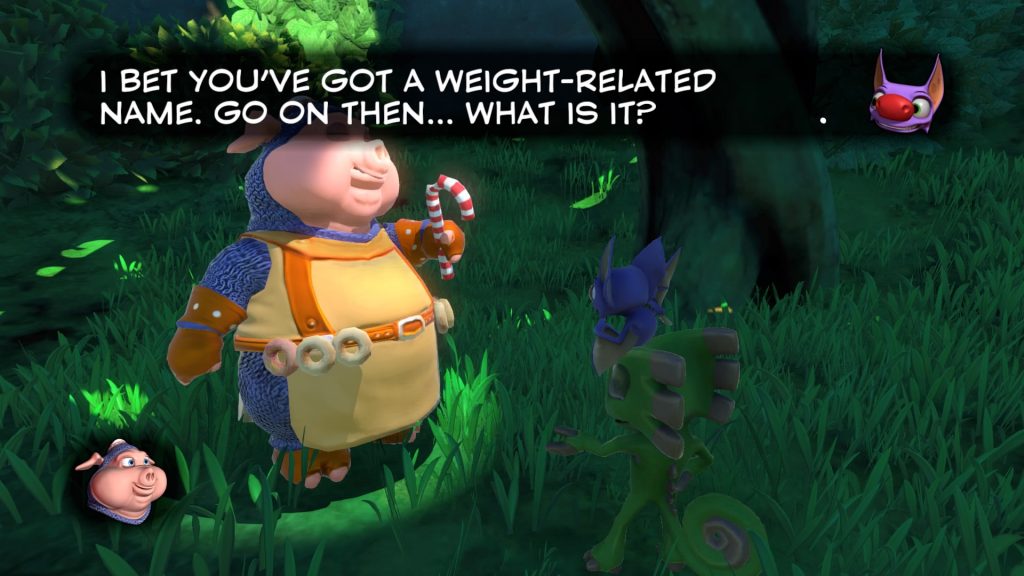 Despite some strange dialogue choices, I did enjoy chatting with a range of characters. Well, sort of. One of the first things I noticed in Yooka-Laylee is that they have chosen to avoid voice-acting, instead putting text dialogue in speech bubbles, many of which are unskippable. Instead of voices, characters squeak at you in quite a repetitive fashion. While I enjoyed the other music and audio in the game, I found myself reaching for the mute button whenever a cutscene kicked in.

Still, the characters themselves are cute. I think I like Trowzer most. He’s a snake. It’s a weird innuendo. See what I mean about adult humour? Anyway, he is a salesman who wears pants—or trowzers, if you will—which is difficult for a snake to accomplish. Mostly I’m just really proud of him.

You see Trowzer in every world you visit. In fact, you see a lot of the same characters across worlds. I understand that reusing character models saves time and resources, but the excitement of meeting a wide variety of interesting people in the Tribalstack Tropics wears off when you realise you will be seeing the same people in Glitterglaze Glacier and Capital Cashino. 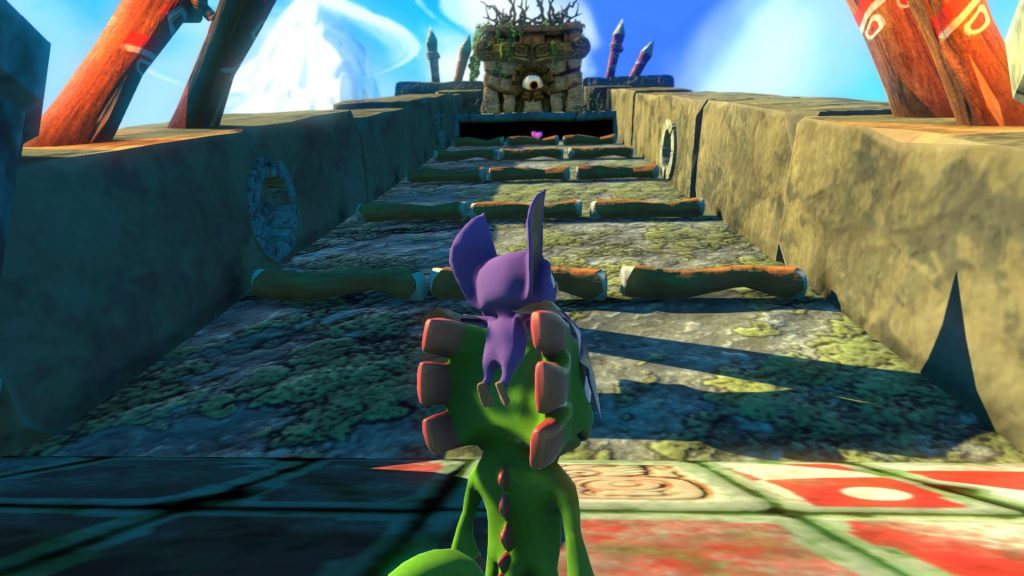 Most of these characters send you on little quests, of which there are quite a variety. There are puzzles, riddles, platforming challenges, races, shooting ranges, and really strange boss-fight quizzes that test you on your knowledge of in-game characters and locations (which I totally aced because I am a nerd).

Besides the quizzes, I was bad at many of the challenges. This was unusual for me—typically I’m not terrible at platformers, so sometimes it became difficult to tell whether my struggles were because of me, the game’s high difficulty, some glitchy mechanics, or a combination of the three. I think the uncertainty made it even more frustrating. 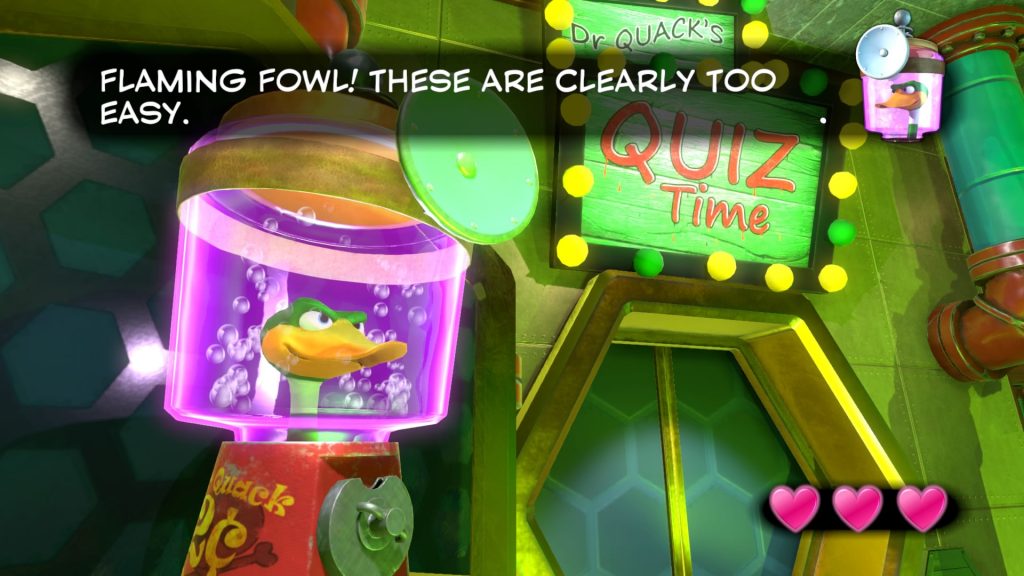 Because of the difficulty, I was excited to learn that the game has a local co-op mode. I assumed that this mode might have one player control Yooka while the other controls Laylee, and they help one another complete the tasks that are difficult solo. Unfortunately, this is not the case. Instead, in local co-op Player 2 controls a swarm of bees.

Basically the bees have one job to do: collect butterflies. These are the same butterflies that Yooka must eat to replenish health, or stand on top of to replenish energy after using abilities. For the swarm of bees to successfully collect and store these butterflies, Player 1 has to stand very still and try not to move the camera (or resist the game moving the camera on its own, which it often likes to do). The swarm of bees can store a limited number of butterflies, and spit these out for Player 1 at times when they are useful. As far as I can tell, that’s the only job the swarm of bees actually has. I was careful to say ‘Thanks, bees,’ every time my partner helped me with this, simply because opportunities to show appreciation for the swarm were… rare. In the end, we made our own co-op mode, which involved the classic chuck-the-controller-at-each-other-whenever-things-get-tough approach. 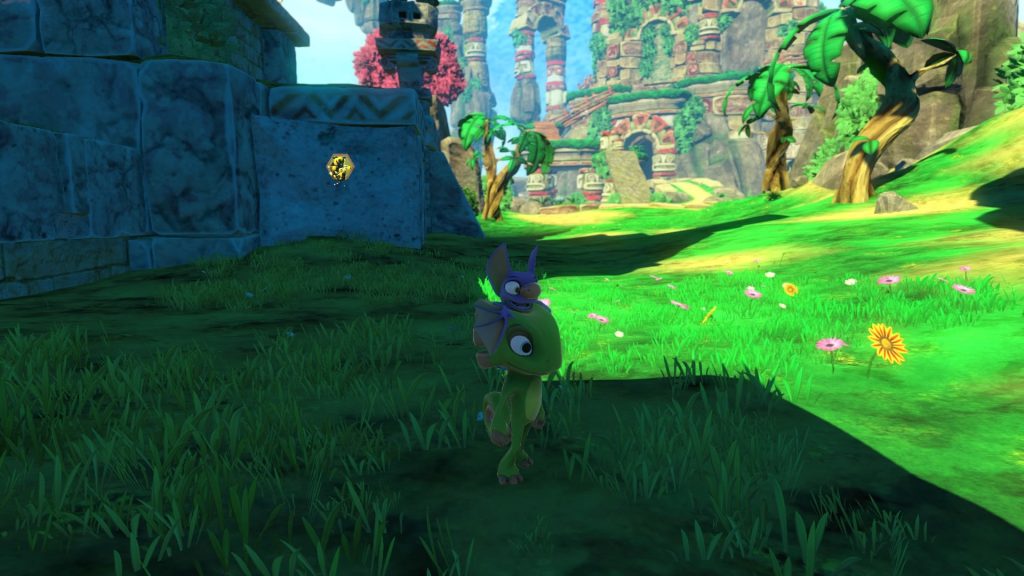 I feel like playing Yooka-Laylee with a shared controller is the right way to do it. The game seems to recognise that everybody likes to play games a little differently, but instead of providing options for the player, it instead insists that the player do everything. Sharing the controller means I can enjoy exploring the expansive, non-linear worlds in search of secrets, while passing on the aspects I find more challenging or frustrating. But I suppose that’s also reminiscent of the old days, when I played 3D platformers and asked my dad to do all the hard bits.

Yooka-Laylee seems more targeted towards nostalgic adults than the next generation of young gamers. This makes sense, considering who was responsible for helping Yooka-Laylee become a reality, but it’s also a shame. The 3D platformer seems to have all-but-disappeared and I miss the playful, exploratory joy of these children’s games; I think the current generation is losing something due to their absence. Overall, I enjoyed my time with Yooka-Laylee, but I’m disappointed it chose to be a window into the past rather than a peek into the future. 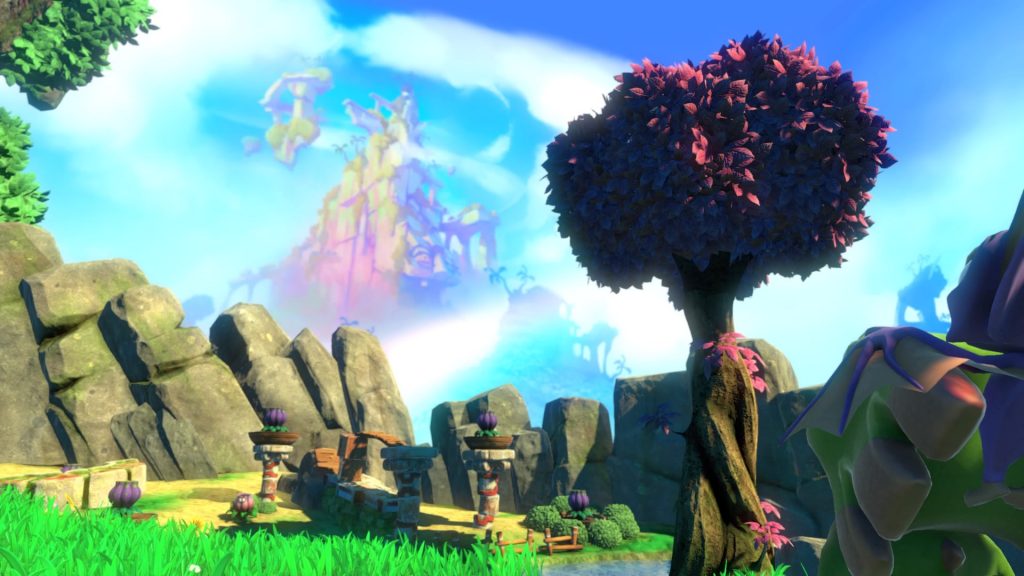