Summary: Wulverblade surprises in just how much fun it is. The best thing is you do not have to spend a bunch of quarters every time you play.

If you like stories of warriors and great battles, then Wulverblade may the game for you. I have to admit, that I really did not know what to expect from a side scrolling medieval high adventure slasher beat-um up. However I can say that Wulverblade sucked me in.

It all starts in the year 120AD with the Roman army grabbing control south Britannia. The Romans of course want to take over the whole of Britannia, and they are using the 9th legion to do it. The plan is to march north and take over the rest of the Island. Unfortunately, for the 9th Legion, a guardian of the northern tribes of Britannia, Caradoc… has successfully rallied the tribe warriors and is now going to fight the Roman army to the bloody end. 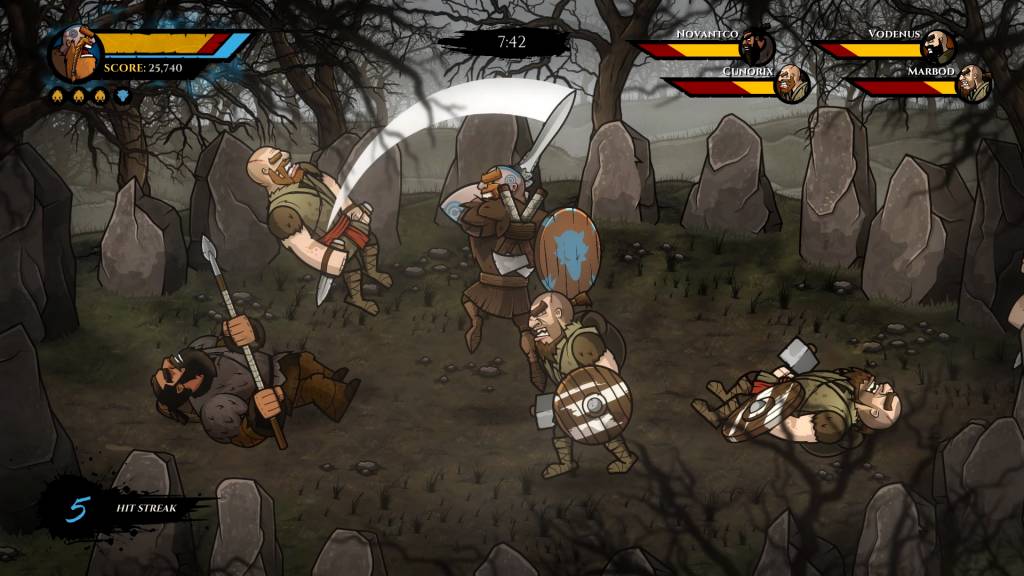 Three family members come together and battle the Romans. During the battles, players set forth and try to destroy watchtowers and kill the generals. Caradoc, Guinevere, and Brennus are the main characters in the game, players choose between the three to play, and all three have different abilities. Brennus brings the strength, Guinevere has speed on her side and Caradoc is a balanced character amongst the attributes.

There are eight stages to get through, all of which are pretty action packed full of glorious battle. One would think that eight stages would not be enough, fear not warriors…the sections are very long. If you are old enough to remember old school side scrollers like Golden Axe, you are going to feel the love for Wulverblade. While the games concept of side scrolling battles may seem simplistic, do not let it fool you into thinking the game is easy. There is some skill and strategy required while performing the different attacks and defenses. 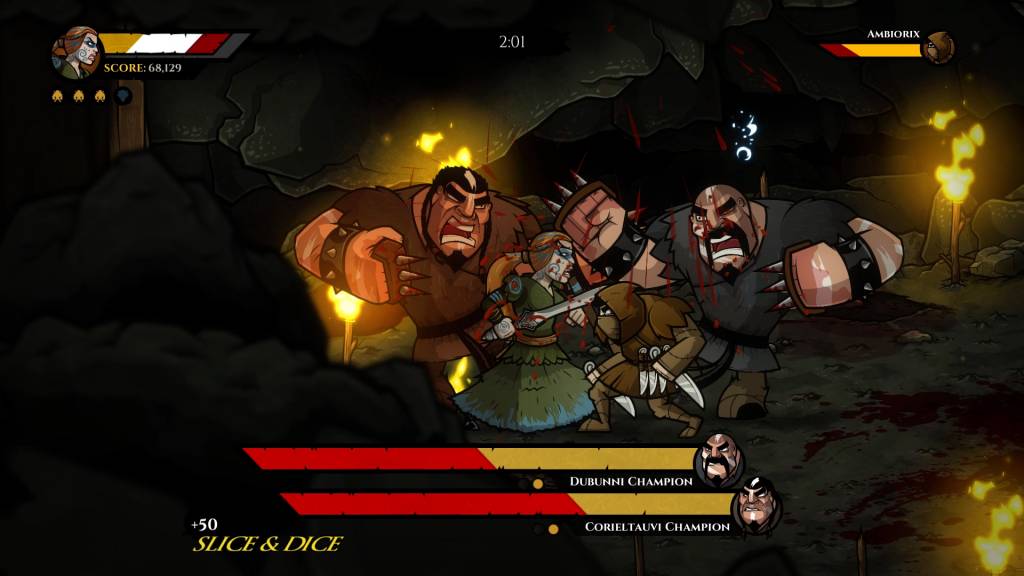 Much like myths and legends of warriors and days gone by, it was said some warriors could go into a frenzy in battle. A rage mode can be charged up. Once there is enough charge and rage/berserk and it is released on your foes, it can heal the player character whenever they hit an enemy. The character becomes, for the most part, invincible during these times. Speed of the player characters attacks is vastly increased. Build up this rage meter by defeating enemies, so go and get those hit streaks going. There is an artificial way to build up the rage meter as well by use of potions. Filling both health and rage meter with potions is useful and is essential to victory.

A good game measures not just how good it is but, also in the fun factor and not being overly frustrating to a player. The game gives just enough of a challenge to make the player feel awesome at beating a level. It can be a challenge, but not an impossible one. 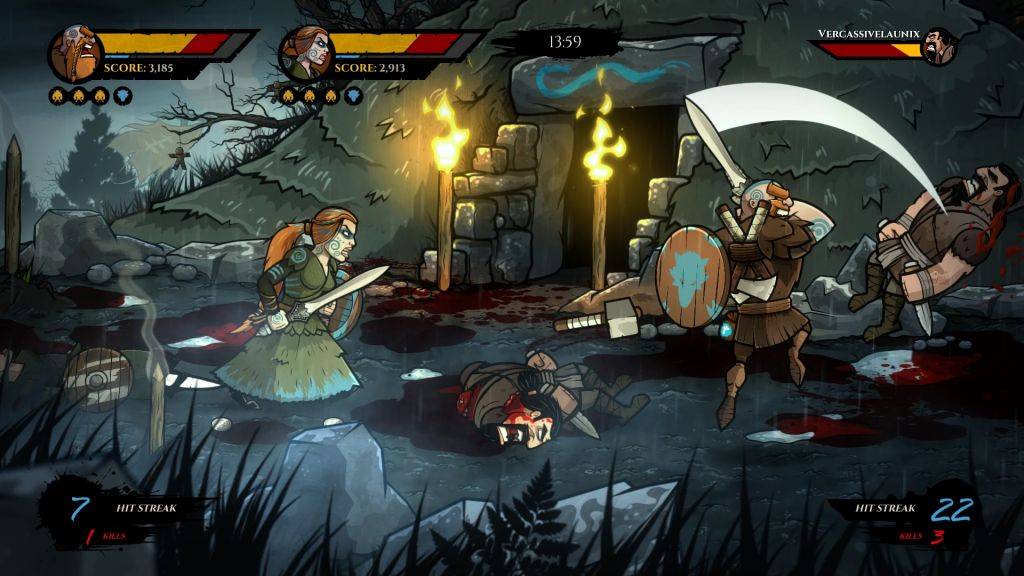 With that said, you are a badass warrior in the game and the designers have succeeded in making you feel that way as you slice your way through the Roman Armies.

The art design looks like it is something you would see in some kids Saturday morning cartoon, and that is very deceptive. The presentation and art style is very adult and lends its self-well in the overall presentation of this game. The story while straightforward does not have to be something with huge twists. In Simple terms, it is of warriors fighting for their country. It psyches you up in the intro and gets the player ready and set for the challenges of the great battles ahead. It is an epic opening worthy of the material, or any great mythical story of warriors against the odds. 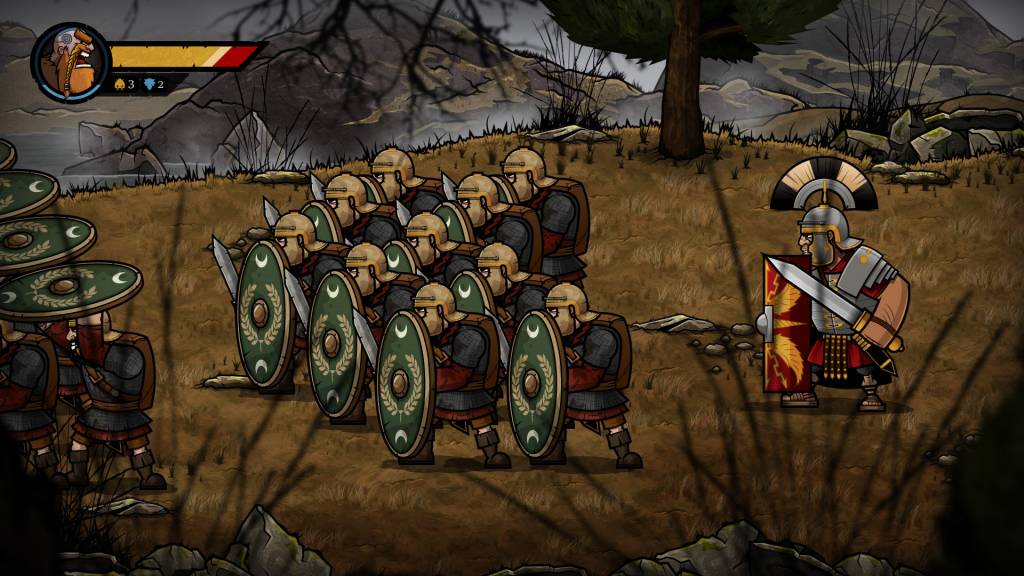 The game also sneaks a bit of history and information on just how much work went into making the game. This was not just a simple concept and designers run with it. They did the research on the lands the peoples and the events to make this one of the most surprising gems out there. As players advance in the game items and collectables present themselves that provide information on real world history that inspires this game.

Extras section, history and story, media shows cut scenes, and armory shows the weapons you come across during the game. There is also a leaderboards section.

Game Modes include Arenas, which is straightforward. You get to battle waves of enemies. This is actually pretty marvelous, because if you want to just jump on in and have a quick battle before running off to do whatever you’re doing for the day, or just unwinding after a long day. You can just jump on into Arenas and have at it. It is brilliant.