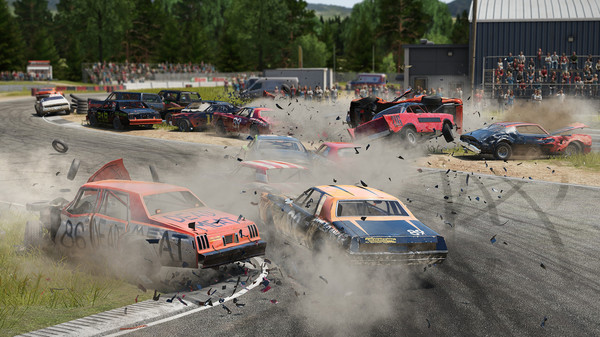 Let’s start with the basics… It’s fun to race a car recklessly, it’s fun to drive a car without too many consequences, it’s fun to nudge someone into a fence at just the right time, and it’s therapeutic to drive as fast as you can into another car who is just trying to turn themselves around a corner properly. But while Wreckfest revels in chaos, complete with a fantastic car damage which accurately dents, bends and removes pieces from your ride based on the location and speed of contact, there is more to this game than just crashing. There is a decent driving game here complete with a long and diverse career mode, plenty of cars to unlock, and upgrades to keep you tinkering in the garage.

This is not a complicated racing game, but definitely a fun one. In addition to nice lines, accurate braking and neat tail slides, you will need to add purposeful ramming and well-timed bumping to you driving repertoire. The hero of the game is without doubt the ability for the car to fall apart around you. When combined with the exploding tire walls, fences to smash through and slippery driving surfaces, the game is designed to encourage a level of anarchy. The tracks are designed to accommodate the chaos with narrow straights, tight turns, side banks, and figure eights to encourage constant grinding, bumping, and banging with surprisingly aggressive A.I. opponents.  The driving mechanics suit the game’s context. The dented, recycled beasts you drive through the dirt don’t have the handling of Porsche around LeMans or the acceleration of a Ferrari at Monza, but that is the way it should be. It definitely feels like controlled chaos as your car squirms underneath you and fights as you try to keep it on the straight and narrow. 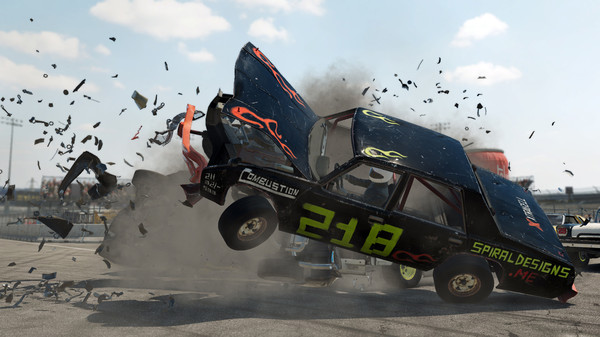 While the circuit racing is the star, the raw enjoyment of a destruction derby adds a great break from the jaw clenching need to own the top of the podium. Instead these focus on the simplicity of ramming your metal beast into other hunks of metal just to watch bits of car (and humorously animated drivers) fly off in different directions. In addition to the more standard racing tracks, the career mode also includes a series of ‘gimmick’ races. From couches, to RV’s, to lawnmowers and combine harvesters, this while sounding fun turns in to a real battle for your sanity. The reduced speeds, terrible handling and crazed AI meant I was hoping for them to be over, rather than relishing any ‘hilarity’ I felt before the green light went off.

Without doubt the worst part of the game is the extended load times. These felt very early 90’s when this was considered acceptable. Thankfully these days I have a smartphone which ensures the loading minutes can be spent scrolling through Instagram and Twitter, but if it wasn’t for this my controller would be in a few pieces by now. When combined with the at times struggling frame rates, it certainly took the ‘polish’ off the game. The heavy-metal based soundtrack is fun at first and really helps you get ready for destruction, but after 30 minutes or so it starts to wear a bit thin and I just wanted to ram my opponents cars in peace and quiet. 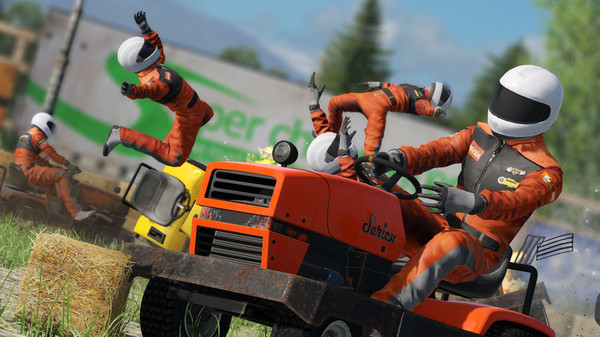 Wreckfest neatly straddles the line between an arcade feel and a serious driving simulator. While driving with reckless intent will be rewarded, you will find a solid old-school racing game underneath. No guide path, no assisted driving, just hard, elbows out racing. The rival feature encourages this, as within each race you will be rewarded for getting revenge on those who wrong you. In the end you will find a straightforward racing experience which focuses on simple cars and maximum damage, providing a nice escape from the idealized pure speed focus on which other racing games on the market encourage us to aspire to.

While we can talk about the career mode or the driving mechanics it really doesn’t matter. At its core this is a driving game which offers destructive anarchy and does it very well. While we can nit-pick the audio, the loading times and the lack of paint options, in the end this doesn’t really matter. The fantastic damage modelling and destruction effects ensure Wreckfest offers an anarchistic, fun and varied demolition derby experience.