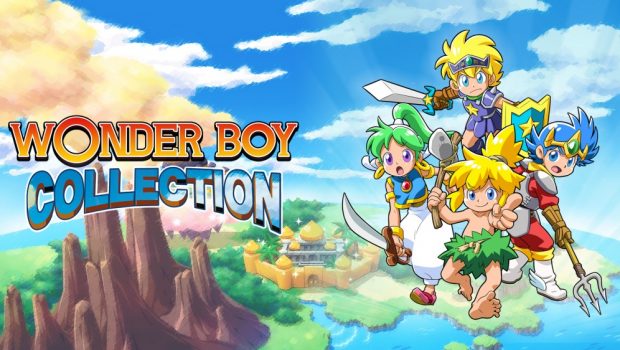 Summary: The Wonder Boy Collection is a solid retro collection that finally puts some respect on old Tom-Tom’s name.

What is the secret of your power?

Despite it being a retro classic and fairly solid franchise, the Wonder Boy series really hasn’t gone down in the annals of gaming history, with the series overshadowed by industry luminaries like Sonic and Mario and myriad others. 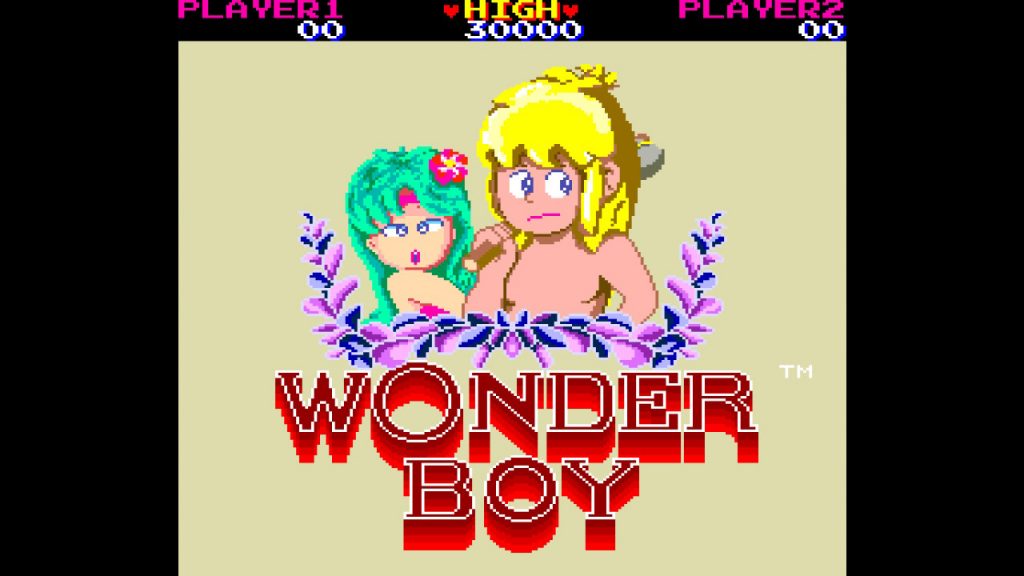 One of my earliest gaming memories was dropping coins into an arcade machine at the local fish and chippie and discovering the original Wonder Boy game and I remember being particularly enamoured with the skateboarding mechanic, despite not making it very fair due to gaming inexperience and lack of sufficient funds… They designed those arcade cabinets to gobble up coins and this was reflected in the difficulty of many of the games on offer. 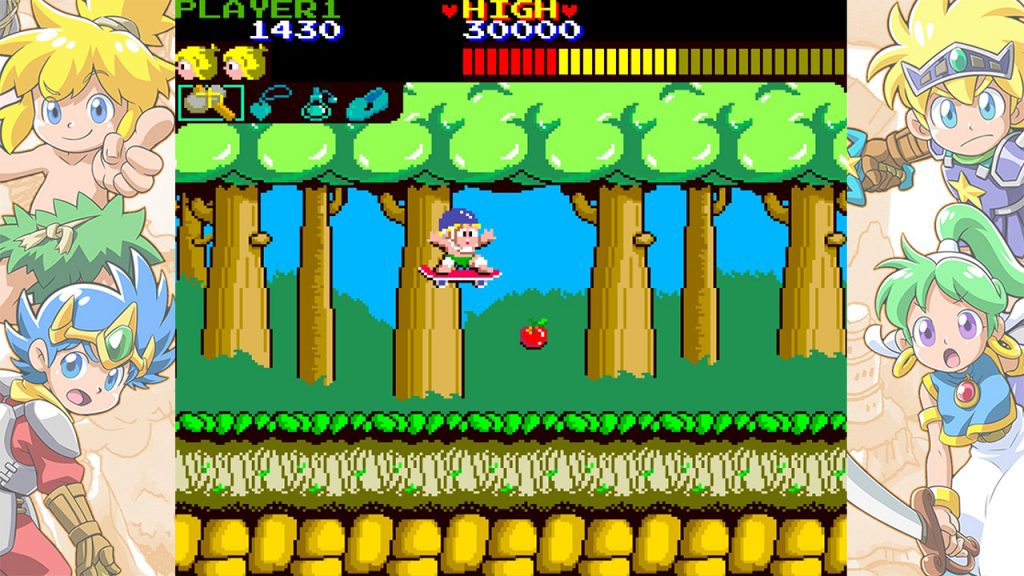 Firstly, I have to address the elephant in the room: There are actually two versions of this collection, with the regular digital version containing the four games described above and a physical collector’s edition from Strictly Limited Games that includes two additional titles: Wonder Boy III: Monster Lair and Wonder Boy III: The Dragon’s Trap. Locking the two extra games behind an edition that’s restricted to 1000 copies and costs around 150 AUD is particularly galling and makes this collection feel insubstantial as a result.

Still, let’s focus on what IS on offer in this version of the collection.

The original title still holds up today, even if it is extremely rudimentary in design. You traverse multiple environments in order to rescue your girlfriend from the clutches of a villainous king, controlling the daftly named caveman child Tom-Tom. You attack enemies by throwing stone axes and can collect a skateboard and other power-ups from eggs you find lying around and… Well, that’s pretty much the extent of it.

One interesting element is the vitality mechanic, which is represented by a steadily decreasing bar that you must top up by collecting fruit scattered throughout the stage. Lose your vitality and you kick the bucket. 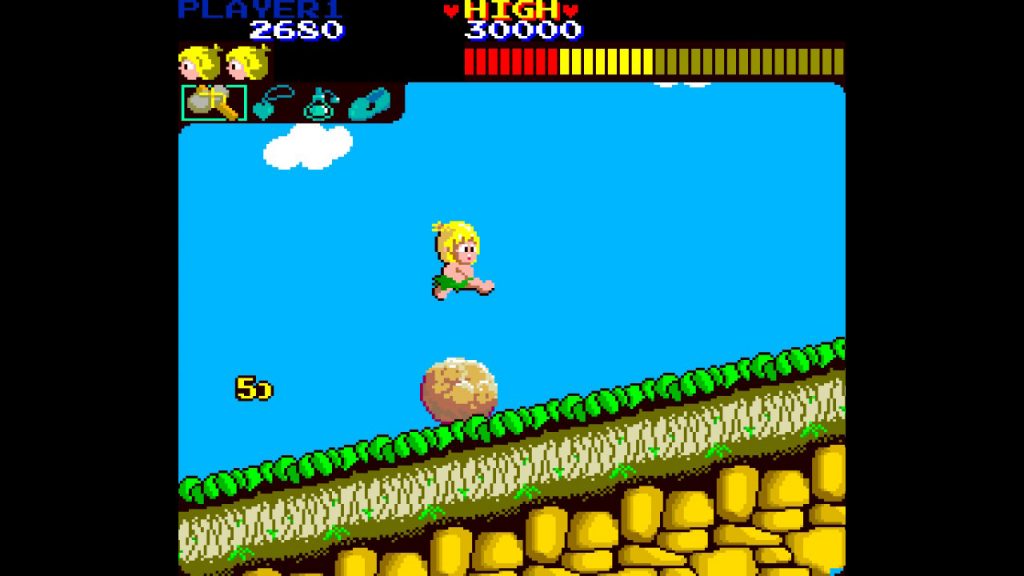 This adds a unique challenge to the game but can sometimes get on the nerves due to fruit becoming scarcer as the levels go on, as well as the character jumping two different height levels and there being seemingly no reliable method to control which one he would do at any given time.

This aforementioned frustration can be mitigated somewhat by using save states and a rewind function, but both this and its arcade sequel, Wonder Boy in Monster Land, exemplify the early arcade design mentality of unfairly ratcheting up the difficulty in order to chew through a hapless kid’s pocket money allowance. 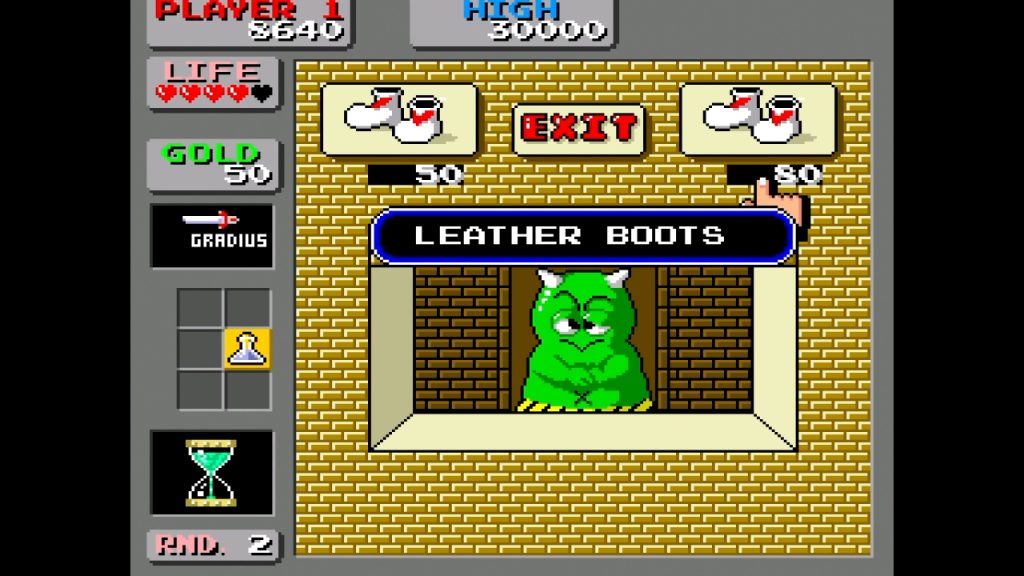 Speaking of Monster Land, this sequel sees a distinct shift from the straight platforming of the first title and shifts into a quasi-RPG title. You can upgrade Tom-Tom, his weapons and armour, use equipment to boost abilities as well as cast spells. It’s still a fairly straightforward game but you can clearly see a foundation for the latter two titles being laid.

The last two entries were released for home consoles, so they were a bit more user friendly. Monster World is a solid enough game that expands on the elements introduced in Monster Land and is a tad more user friendly, although some parts are annoyingly abstruse, albeit often due to translation issues.

The real jewel in the crown here is Monster World IV, which sees players take control of a new female character, Asha, instead of Tom-Tom. This is the pinnacle of the Wonder Boy series and shows how refined the formula had become, offering up a masterclass RPG platforming adventure that far supersedes the other titles included here.

I had never played this before so it was a real pleasant surprise and was easily my favourite game in the collection, nostalgia for the first title notwithstanding.

The Wonder Boy Collection is a solid retro collection that finally puts some respect on old Tom-Tom’s name (and Asha’s as well, for that matter). Despite some anachronistic design elements and difficulty spikes due to the earlier titles’ arcade origins, all four titles included here are well worth diving into if you’re a fan of classic gaming and, if nothing else, the theme song from the first title is a straight up banger.

The omission of the other two titles included on the physical release is a bit of a slap in the face to fans of the franchise, however, and there was no real reason why they couldn’t have also been included here. 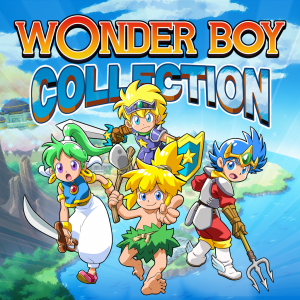