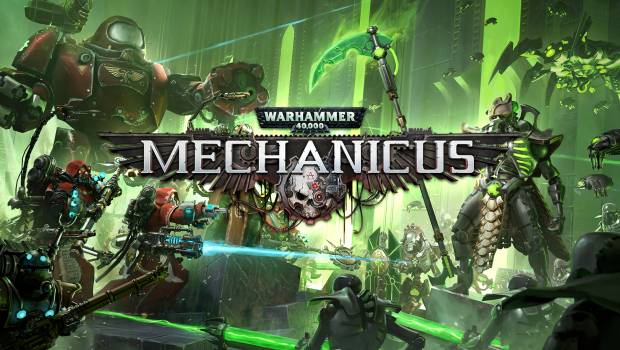 Summary: Players take control of humanities most technologically advanced faction, The Adeptus Mechanicus, as they explore the newly rediscovered planet of Silva Tenebris.

“Warhammer 40k: Mechanicus” throws players deep into the Warhammer 40k universe in this turn based strategy game from Kasedo Games and Bulwark Studios. Players take control of humanities most technologically advanced faction, The Adeptus Mechanicus, as they explore the newly rediscovered planet of Silva Tenebris. With limited resources, time running out and a long way from home, every decision, victory, and defeat will shape the very outcome of your fate.

Before diving headfirst into the game, it would be appropriate to establish a bit of background knowledge for those who aren’t familiar with the Warhammer 40k universe. To summarise the 40k Universe, in the grim darkness of the future, there is only war. As the imperium of man grew and took to exploring the stars, different military factions were established, each vastly unique with their own doctrines and ideology. One such faction is The Adeptus Mechanicus – machine worshiping cultists that are in charge of the planet sized factories know as Forge Worlds. Their obsession with technology and its secrets is what drives them to replace their bodies with cybernetic enhancements, leaving them more machine than human. Within the faction are three key ranks to be aware of: The high-ranking leaders known as Magos, the senior ranking officers called Tech Priests, and the expendable grunts called Servitors. One of the main duties of The Adeptus Mechanicus is exploring and documenting new discoveries, such as is the plot of this game.

However, humanity is anything but alone in the universe with many deadly alien threats lurking in the darkest corners of space. The enemy you’ll be facing in “Warhammer 40k: Mechanicus” has been hiding in the shadows longer than any other. Sleeping deep beneath the planet’s surface in their ancient tombs lies the dormant Necrons. An immortal race of metal skeleton warriors, they are as deadly as they are ancient, believed to have conquered the universe long before man existed. Very little is known about this mysterious race as most who enter their tombs do not return. 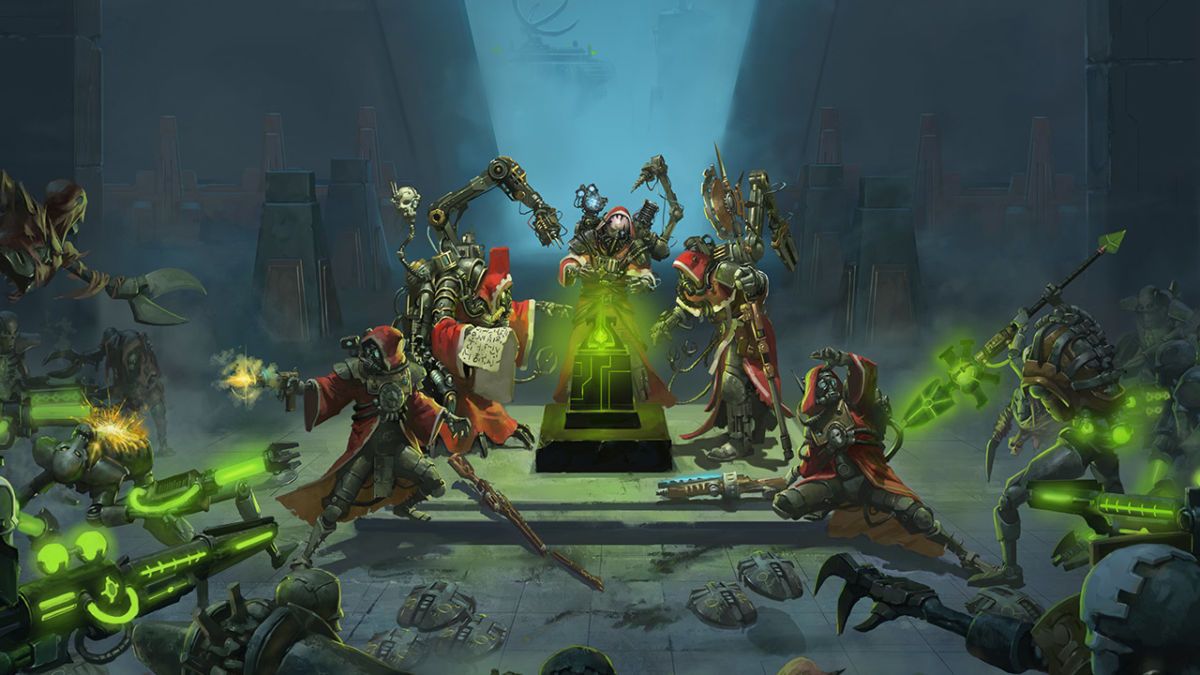 “Warhammer 40k: Mechanicus” takes place on Silva Tenebris, a planet that was lost until recently. Having previously been discovered eons ago, it is the last known location visited by a previous Magos before he disappeared. With the possibility of acquiring new knowledge for their archives and finding out what happened to the missing Magos, The Adeptus Mechanicus sent their largest ship to investigate. Not knowing of the horrors sleeping below the surface, the expedition party accidently trigged the reanimation process of the Necron forces upon entering the ancient tombs. Now a race against time is in effect as The Adeptus Mechanicus strive to collect as much data as possible before becoming engulfed by an overwhelming force of Necron warriors.

As you might already be able to tell, Mechanicus is quite a lore heavy game. Because of this, the developers have been able to include some very interesting D&D-style game mechanics. Each mission is broken down into three main parts: Selecting the troops for the mission, exploring the tomb, and then the final confrontation. Whilst not too much of an issue in the early stages of the game, players must select which six Tech Priests and Servitors are to be deployed during the mission. Tech Priests are considered as the elite troops of the game and have an array of loadout and skill tree options, giving players the power to create a team that suits their play style. At later stages of the game, players will need to carefully choose what units are deployed for missions based on what enemies are going to appear in the mission. The Necrons have a very diverse range of soldiers ranging from close combat specialists to teleporting assassins. Therefore, pairing your troops accordingly can mean the difference between victory and defeat. You might think that this is quite a trivial thing to mention but that brings me to the next stage of the mission, navigating the tombs. 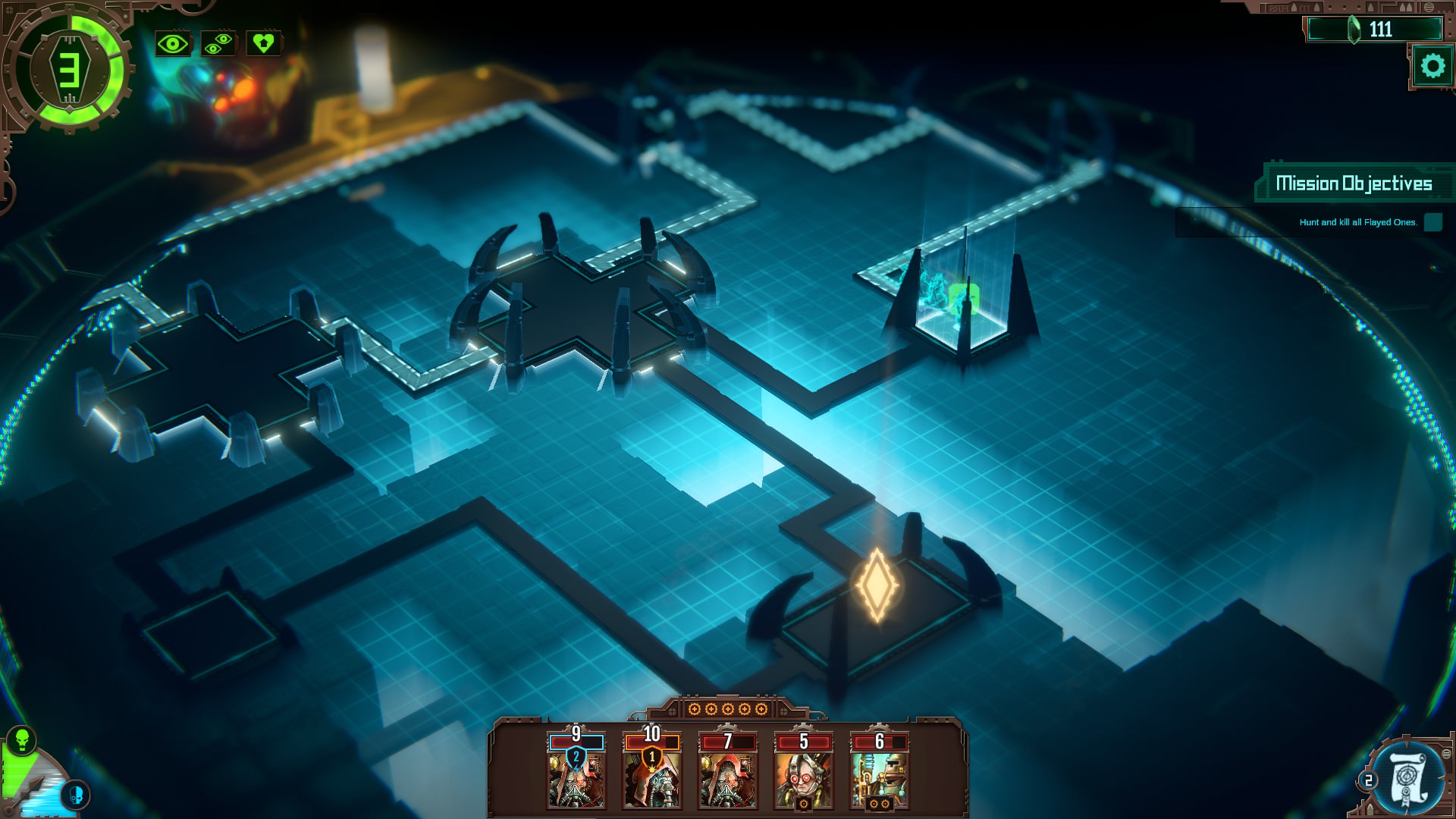 Time is literally not on your side in “Mechanicus” as with every passing turn, more and more Necrons rise from their sleep, ready to kill you on sight. Before you get to fighting undead, immortal, alien robots, your team must navigate the maze of rooms and tunnels within the section of the tomb you have entered, making your way to the objective marker where you’ll commence battle. Along the way, you’ll use a bird’s eye map to navigate your team by selecting which room to enter next. Every room you enter will present your team with a written scenario and 3 options on how to proceed. Depending on your choice, you will either be rewarded or punished. Rewards can include more upgrade resources, better equipment, or fewer troops in the battle to come. However, make the wrong choice and you’ll be doing battle with a much larger Necron force with better stats. The scenarios you encounter are quite interesting and some will make you really think before you act. The trick here is to think like The Adeptus Mechanicus – what might be logical to you might considered heresy by their standards. In one such scenario, I came across a Necron alter with the options of leaving it alone, blowing it up, or defacing it with used motor oil and empty bullet casings. Trying to be realistic about my situation, I chose to blow it up as leaving it alone seemed too much like a bad idea and defacing it with motor oil just sounded stupid. Sadly, I chose wrong. The alter was made of an indestructible metal and the explosion only alerted more sleeping Necrons. As stupid as it sounds, The Adeptus Mechanicus considers motor oil holy and smearing it on an alter would be the equivalent of using blood. This is only one of many examples where the player really needs to place themselves into the Warhammer 40k Universe to make the right choices. 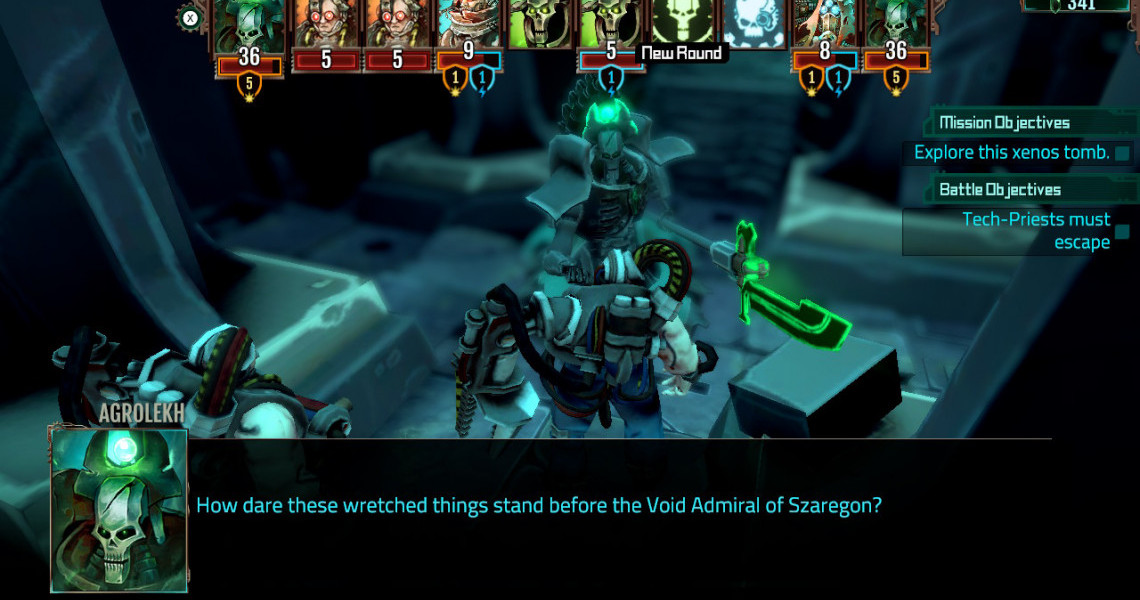 Combat within the game is very straight forward, using a turn-based RPG system that is initiated once players reach the room contain the objective marker. Before combat begins, players assign the starting position of their Tech Priests and any servos they wish to deploy, using the typical grid system that you’ll find in most turn-based strategy games. At this point, most of the combat is near identical to other games within the same genre, each unit takes turns moving, shooting, and using special abilities. These actions can be taken in any order but there’s a catch. Some abilities require spending action points in order to use. The problem is that you only have a limited number of points that are shared between all of your troops and they don’t automatically regenerate at the start of each turn. For example, if I spend all of my points on a single unit, then I won’t have anything left over for my other units, and will need to use their turn to collect more. This simple game mechanic takes a simple game and turns it into a complex chess-like match that forces players to think several steps ahead.

While I personally love turn-based strategy games, the one thing that ruins “Warhammer 40k: Mechanicus” for me is the graphics. Using the interface and navigating the map is quite clunky and is a major drawback. Zooming in on units to get a closer look at isolated areas of the map comes across as very rough and lacks the finer details I would expect to see. The camera angle is permanently fixed with no option for tilted views. Only rotation, zoom and panning are on offer, making it a rather disappointing feature for people such as myself who want to see those finer details. In truth, I found this to impact the overall gameplay, leaving me feeling slightly frustrated that I couldn’t achieve the same camera angles other games have been doing for years. 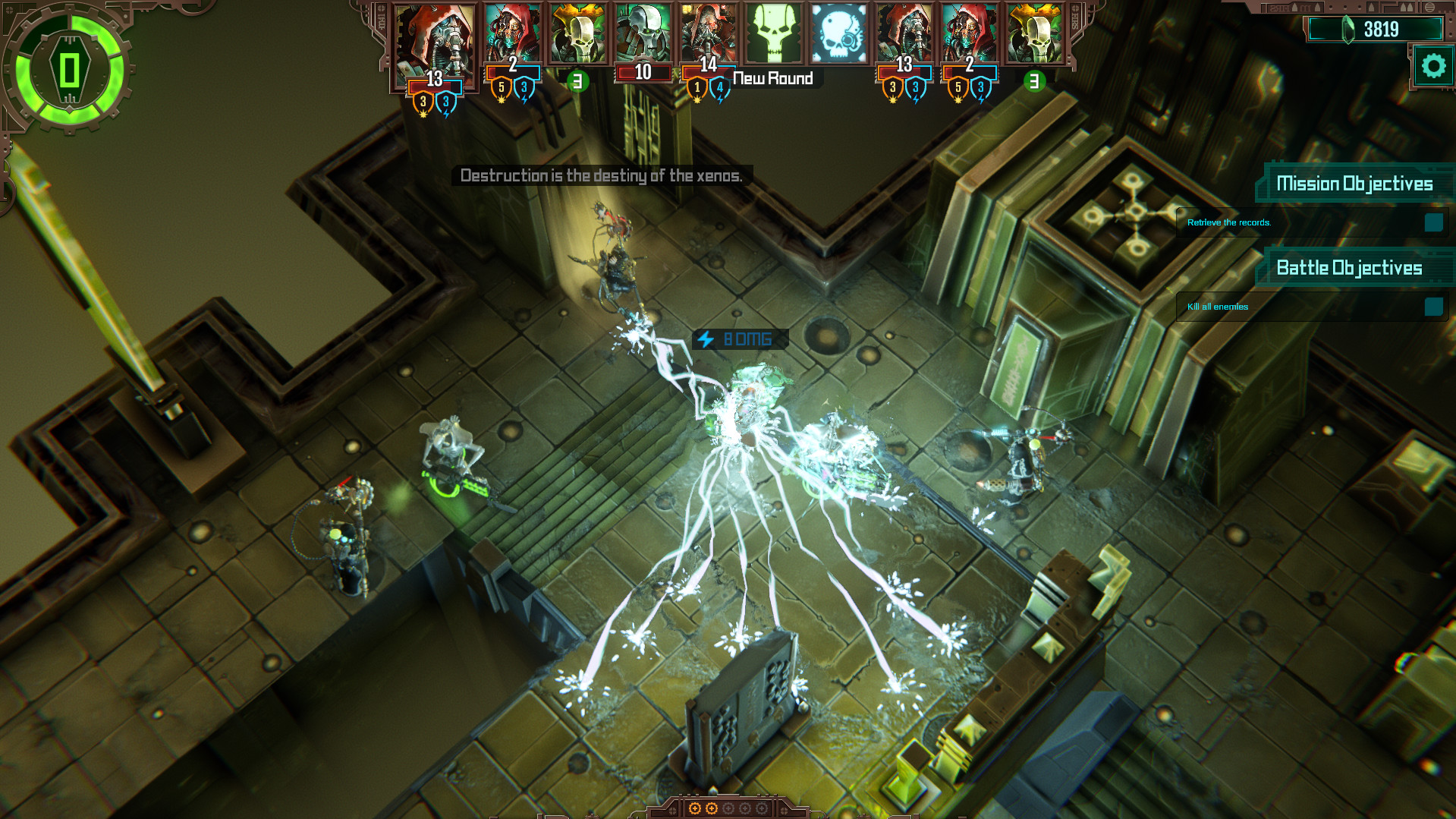 “Warhammer 40k: Mechanicus” is definitely a game for those who are familiar with the Warhammer 40k universe from playing the table top game, reading the books, or having previously played other video games such as the “Dawn of War” series. Combat is quite challenging but simple enough that players can pick it up quickly after a bit of trial and error. I would have like to have seen more in the way of a stronger combat tutorial that explains how the interface works. This would have lessened the already intense learning curve and made it easier for all console players. Given that this game originally launched on PC, I don’t think it’s been adapted very well for consoles and some extra work to smoothen the transition would have made a world of difference. But at the end of the day, it’s a good game once you know what you’re doing.