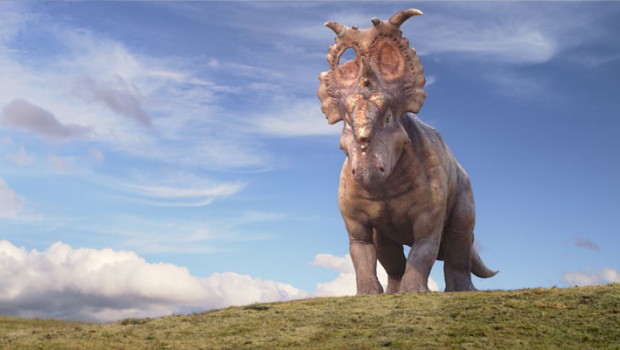 Taking a page from the excellent BBC series WALKING WITH DINOSAURS, directors Barry Cook (Mulan) and Neil Nightingale use the amusing yet unrealistic script of John Collee to create a kid friendly movie focusing on the world of dinosaurs. Even though WALKING WITH DINOSAURS THE MOVIE contains talking dinosaurs with many of these extinct creatures boasting a plethora of humanlike emotions, there’s still something endearing about them, especially with the marvellous CGI effects that creates this very realistic prehistoric world.

The hero of the film is Patchi (Justin Long), a young Pachyrhinosaurus who is about to embark on the biggest adventure of his life that includes going from zero to hero. However before we get to the dinosaurs, the directors introduce three human characters in the present day that include Ricky (Charlie Rowe), his sister Jade (Angourie Rice) and their paeleontologist uncle Zack (Karl Urban) that feel a little out of place in the story. Ricky who suffers from the stereotypical teenage angst is not interested in his uncle digging up old fossils and when he wanders off, he meets a talking crow (John Leguizamo) who initiates the trip to the prehistoric era and thus begins the story of Patchi. I’m guessing that Ricky is the Patchi character here!

There is also an element of edutainment in the film as when a new type of dinosaur appears, the movie stops and its scientific name is displayed on the screen and the crow we saw earlier becomes a prehistoric parrot called Alex (Leguizamo) who becomes the narrator of the film. In essence, Walking with Dinosaurs the Movie is a coming of age story as the movie follows Patchi from youth to adulthood as he must come face to face with a variety of deadly dinosaurs, find love with Juniper (Tiya Sircar) and eventually become the leader of his herd.

Even though the plot is clichéd and at times a little bewildering, the animation used to create Walking with Dinosaurs the Movie is outstanding. It is eerily realistic and I don’t think I’ve seen such great CGI for awhile, especially the texture on the dinosaur’s skin and the amazing water effects. The special effects are definitely the highlight of the film so kudos to the production crew. To compliment the great special effects, audio is equally good and really booms through your speakers. The voice acting is decent, particularly Sklyer Stone as Patchi’s brother Scowler and Tiya Sircar as Juniper who also brings a touch of cuteness to these imaginary dinosaurs. One big issue I had with the movie is the lip syncing of the dinosaurs which is actually non-existent and is a little disconcerting when there are multi dinosaurs in the same screen. As an adult that annoyed me but my 6-year old son had no issues whatsoever.

On digital, Walking with Dinosaurs the Movie comes with a fun collection of extras entitled Dino Files that goes into five of the dinosaurs featured in the film which includes Pachyrhinosaurus, Gorgosaurus, Troodon, Pterosaur & Alexornis. Each small feature highlights some facts about each species and is a nice compliment to the film itself.

Walking with Dinosaurs the Movie is definitely not a film to be taken seriously and is also aimed at kids from its over the top characters and fun edutainment plot. I mean this is the only film you’ll see a Pachyrhinosaurus tell a Tyrannosaurus Rex to politely movie on so don’t expect nothing too realistic or even gory. Sure there are a few scary scenes for some of the younger kids but overall, it’s a fun kid’s movie that boasts some exceptional special effects. Unfortunately the story behind Walking with Dinosaurs the Movie is ultimately forgettable which is a shame! 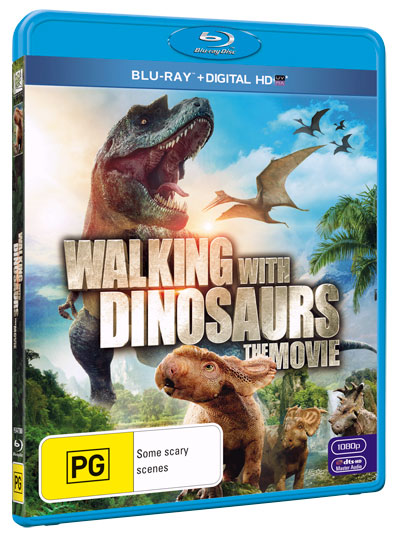