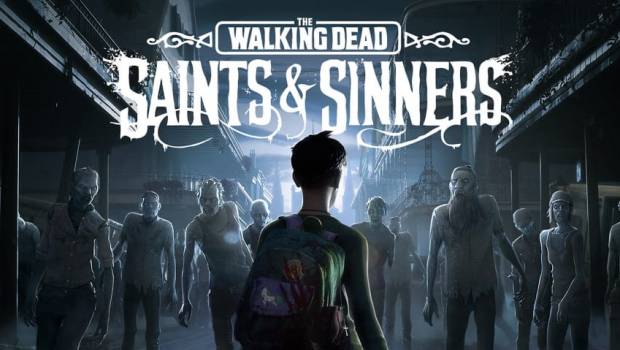 Summary: A solid port of an excellent title, a graphical downgrade is a small price to pay for a great Quest 2 experience. VR legs required, however.

Released last year on big brother PC counterparts, Skydance’s The Walking Dead Saints and Sinners (TWDSS) now cuts its wires for the brand-new Oculus Quest 2. It’s a very ambitious undertaking, as both TWDSS’ graphical requirements plus complex play scheme are some of the most advanced in the burgeoning virtual reality space.

Noting these demands, some cutting of corners was inevitably necessary. Nearly all occurs in the graphics department, with the Quest 2 version of TWDSS a significant visual downgrade from wired PC offerings. As a result, everything in the Quest 2 iteration suffers from an omnipresent muddiness. Thankfully, this doesn’t impact gameplay at all. Nor is there any neutering of TWDSS’ amazing gameplay interface.

Being a re-release, nothing new here in terms of plot. Survive the zombie hordes of New Orleans, also competing factions posturing for control of the region. Areas are traversed by skiff, with new ones available after solving semi-puzzles within found photographs, sketches, and notes. Being the ‘Tourist Edition’ of TWDSS (and semi-justifying the price point), additional weapons and collectibles of this add-on are contained in this Quest 2 package.

For newbies to TWDSS, weapons and accessories are either found or crafted, with the latter producing the best and least brittle options. Crafting also unlocks essential player upgrades and/or equipment, with needed components scattered literally everywhere. Gathered items are stored in a player backpack until appropriately dismantled. 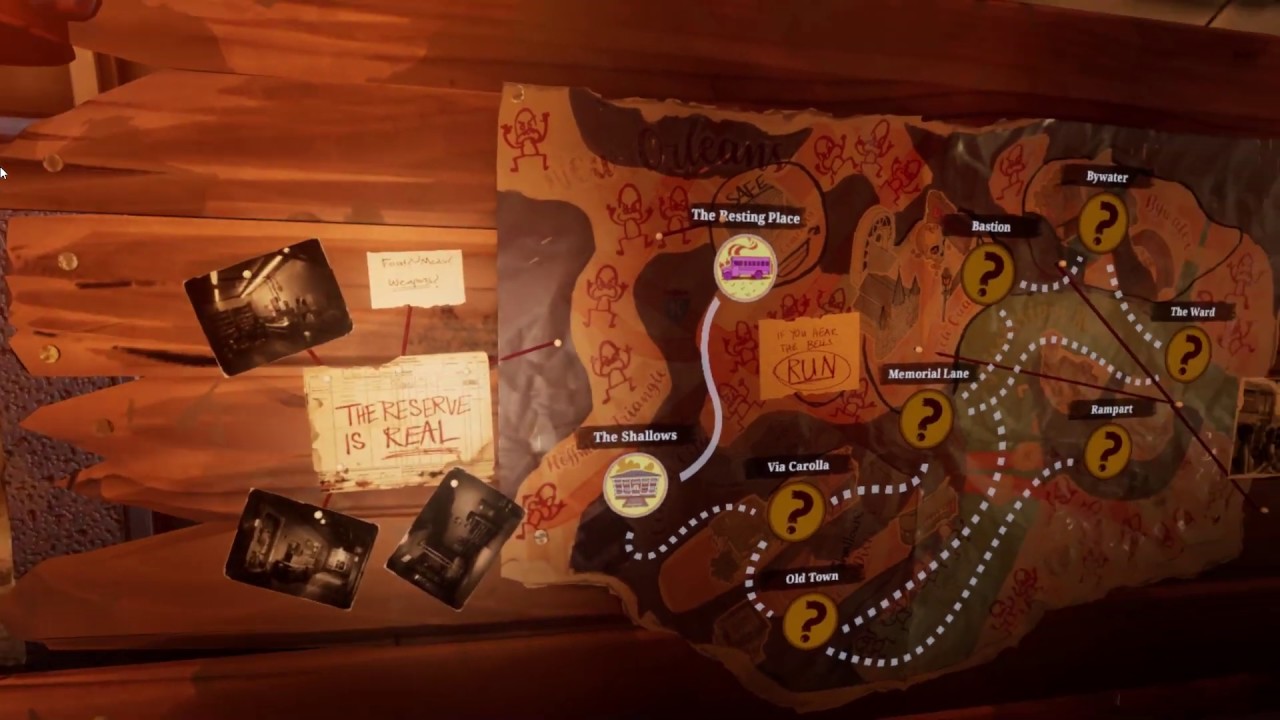 TWDSS features a main hub (a School Bus home base) where said crafting occurs, sleep happens (to reset to less zombies per day…but more overall), also access to the game’s radio (available after completing an early mission). NPCs across TWDSS are anything but static, as conversational and interaction decisions produce a widest array of potential outcomes. Being an absolute jerk is sometimes a good thing…and, in other instances, a serious plot detriment.

Despite downgraded graphics, TWDSS remains creepy as all hell. Audio (sound effects, voice-overs, music) are amazing, and truly create an immersive environment. Related, TWDSS attention to detail is incredulous. Pull a cigarette…light it with your lighter…put it to your mouth…and watch it burn in real time. Weapons can be flipped and re-arranged across hands in mid-air. Reloading guns requires slide locks on handguns, cocking shotguns, and manually loading bullets into revolvers. Melee big weapons need two hands to swing. Up close? Hold zombie heads in one hand, insert then drive a shive through their skulls…and pull out. Hands get more bloody with each kill as proof.

The aforementioned gameplay interface is amazing. Small weapons are housed in side holsters, ammo in a middle pouch, a shake and light flashlight on chest top left, backpack over the left shoulder, and finally two handed melee item over the right shoulder. The always available and essential journal is ready for reading at the player’s right chest region. Items are stored/retrieved via simple drop/grab. While this ingenious layout works wonderfully, it can end up chaotic during heated moments. Plus the journal is a bit confusing to navigate, with critical mission items often buried in sub menus. More than once I didn’t know I possessed an item I had within such a sub menu…and paid the price.

Moreover – and despite being a Quest 2 title – TWDSS suffers from awkward hand angles so prevalent in VR. Opening doors and manipulating the backpack usually result in weird broken wrist visuals. These same doors require manually walking back while opening which – while realistic – really isn’t necessary. 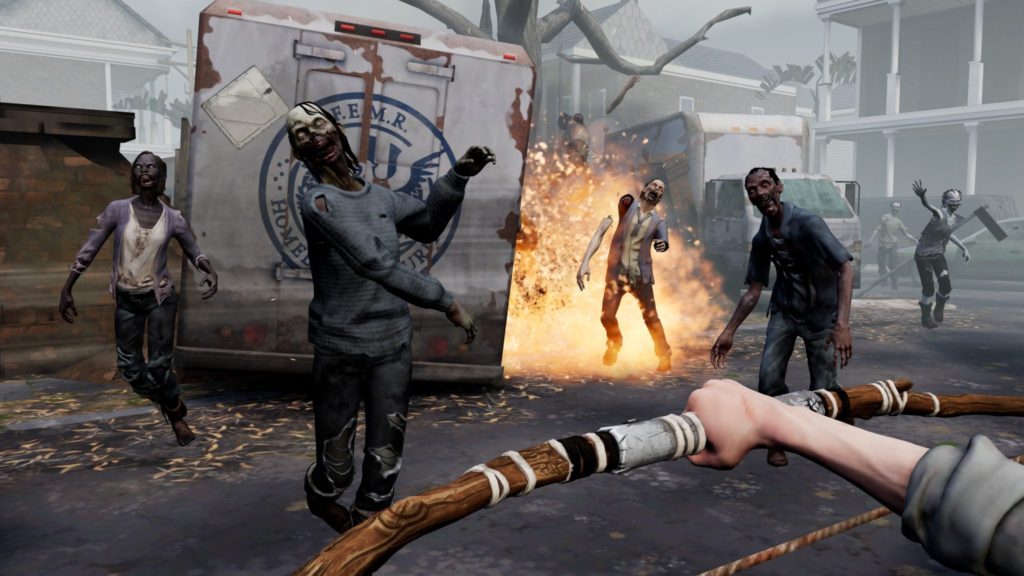 Finally, and very importantly, Skydance made a regrettable decision in limiting walking to free movement only. The absence of a teleport option means TWDSS is best for those with established VR legs alone. Quest newbies may therefore expect serious motion sickness until they establish such legs. Even limiting visible range (to reduce motion sickness potential) doesn’t truly solve the problem. Why? TWDSS requires a lot of free movement, camera rotations and running; there’s simply no way around this. I opted for playing seated to reduce motion sickness potential. This, however, came at a serious immersion cost. Many TWDSS movements are angle and physics based, thus their effectiveness noticeably lessened while seated. Also, manipulating the already complex gameplay interface becomes even more complex compressed into a seated area.

Still, there’s so much play potential in TWDSS, it’s absolutely incredible. The game is the antithesis of quick hit Quest titles, instead opting for a drawn out campaign where capitalizing on daylight hours (indicated by wristwatch) is essential to survive. Maximizing every minute is the way to go, as shortening days produces more zombies the following morning and beyond.

On the flipside, there’s no denying TWDSS is formulaic. Complete a mission in a new skiff area…kill some zombies…gather craft components…return to home base…build new items…sleep…repeat. This does not degrade into monotony as the storyline, environments, and characters are so incredibly engaging. Also, toying around with different ways to use weapons and items is always fun.

Even with a sizable graphical downgrade, The Walking Dead Saints and Sinners (Tourist Edition) is a wonderful launch title for the Oculus Quest 2. Its attention to detail and outstanding interface truly help the platform and title shine.

Reviewer Disclaimer: This review did not employ the Oculus Link cable. Gameplay experiences may vary (for better or for worse) for those opting for this option.