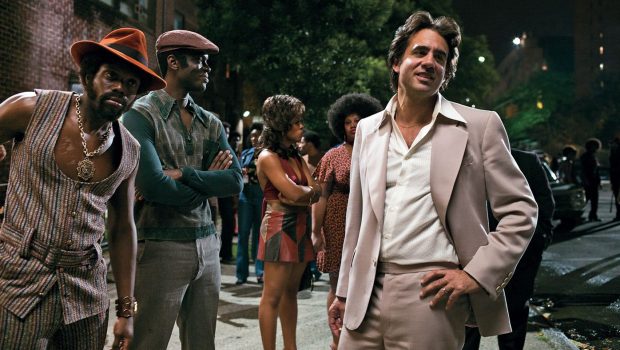 Summary: “Vinyl” is a fun and sprawling TV series that looks at the grit, glitz and glam of the music industry in New York in 1973.

A story clouded by lost brain cells, self-aggrandisement and bullshit. This is what the TV series, “Vinyl” sells you. It’s a heady dramatic turn through the sex, drugs, rock ‘n’ roll and hedonism that was the music industry in New York in 1973. This ten part TV series is a slow-burning, nuanced one that feels like a love letter to the period and the genre and a celebration of the redemptive power of rock ‘n’ roll. 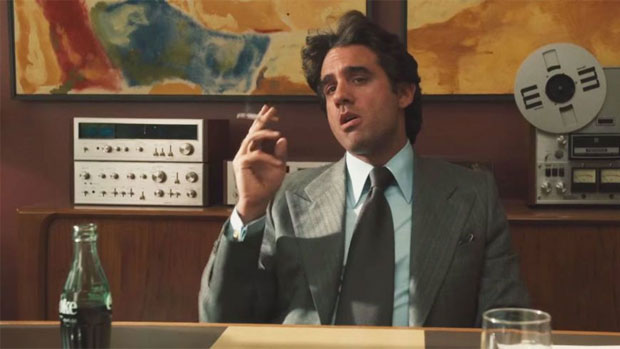 This program has got a pretty impressive pedigree to say the least. The Rolling Stones’ Mick Jagger is a creator and producer along with Martin Scorsese (who also directs the pilot). Terence Winter (Boardwalk Empire, The Sopranos) is also a creator and executive producer and the series stars Bobby Cannavale (Boardwalk Empire). “Vinyl” takes in both fictional and real-life events and artists and it is clear that it has been meticulously researched as it is very true to the period. While the series starts off a tad slowly, the later episodes really hit more of the right notes and will hook the viewer in.

Cannavale stars as the record executive, Richie Finestra and the principal owner of the fictional label, American Century. He is a liar and coke fiend but despite these vices has also managed to maintain a friendship with his business partner and the head of promotions, Zak Yankovich (Ray Romano who puts in a strong, dramatic performance). Finestra is married to Devon (Olivia Wilde) a former model and associate of Andy Warhol’s (John Cameron Mitchell). Devon is now sober and a restless mother to two young children. 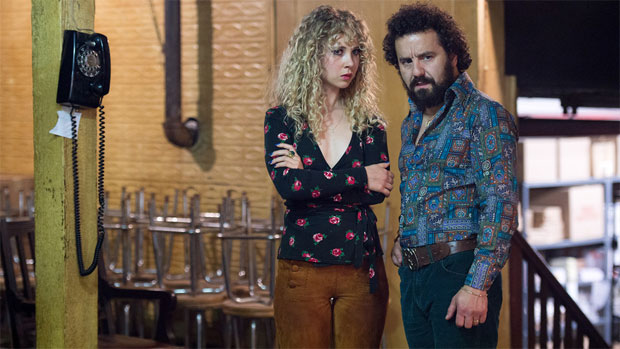 The fortunes of the owners of American Century looked set to change when Polygram wanted to buy the company. But at the eleventh hour Finestra sees The New York Dolls and his interest and enthusiasm in music is restored. The deal is off, he decides to keep the company and attempt to turn their fortunes around for the better. The label is home to some jocular A & R reps and an ambitious coffee/drug girl Jamie Vine (an enchanting, Juno Temple) and she discovers a young, punk outfit The Nasty Bits (lead by Jagger’s son, James).

The soundtrack to this series is fantastic with David Bowie’s “Suffragette City”, “Life On Mars” and “Jean Genie” played alongside tracks like “Hey Joe” (made famous by Jimi Hendrix), The Who’s “Won’t Get Fooled Again, Pink Floyd’s “Money”, The Hollies’ “Long Cool Woman In a Black Dress” and two Eddie Cochran hits that Led Zeppelin liked to cover, “Somethin’ Else” and “C’Mon Everybody”. In some instances the original track is used, in others it is a live version or a cover. The series also portrays some famous musicians in their youth- like Bowie (Noah Bean), John Lennon (Stephen Sullivan), Elvis Presley (Shawn Wayne Klush), Bob Marley (Leslie Kujo) and Peter Tosh (Aku Orraca-Tetteh), among others.

The series is not a perfect one. Some of the sub-plots are not satisfactorily explored (many of the female characters feel like quick punctuation marks to the whole tale), the flashbacks are sometimes a tad confusing and the pilot was overlong (at 113 minutes). But once you sit back and immerse yourself and get into the groove there is a lot to enjoy in this vibrant series. The individuals navigate through difficult marriages, a murder investigation, creative issues, brushes with the law and the mob, sexism and the tragedies of drugs and more. “Vinyl” is an enthusiastic look at the seventies but it’s not hagiography, the filmmakers are happy to show the real and raw grittiness of the environment, and this is especially important when the story is told through the eyes of the troubled main character and particularly as we follow his downward spiral. 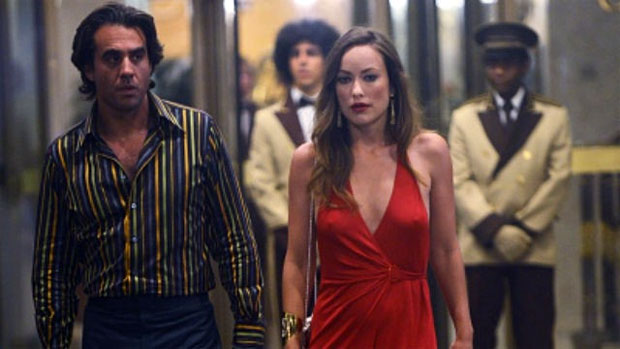 The visuals in this series – like the soundtrack – seem quite true to the era. The colour palette looks like it could have come from an old video from the seventies and the costumes, scenery and props are also fitting for the decade. The special features on the Blu-ray are satisfactory and include audio commentaries, a featurette and some “Inside the episode” looks at the program with Terence Winter.

“Vinyl” is a sprawling TV series and a rich look at an exciting chapter in music. It stars a bunch of mad misfits and details their manic misadventures through friendship, booze, drugs and other excesses from this colourful period. In all, this is one fun and nostalgic look at the grit, glitz and glam that was the seventies New York music industry. Rock on! 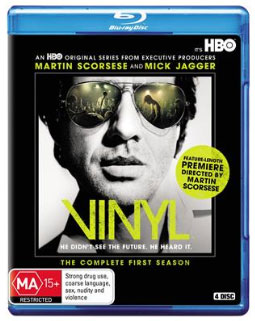