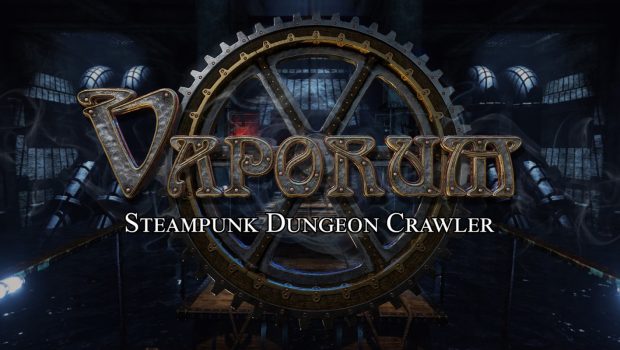 Summary: Steampunk, action rpg and dungeon crawler all in one. Need I say more? Give it a try already!

Vaporum is a Steampunk styled dungeon crawler, with many deep layers, an in depth story and lore, (even if it is a little cliche), some tough and challenging foes and long narrow corridors, laced with tricky puzzles and hazardous traps. A surprisingly well balanced blend of combat, suspense and problem solving laced together with plenty of heart, that maybe lacks a little in deliverance.

The story of Vaporum has your character drawn to an odd obelisk, which as it turns out is a research tower. As you make your way from the lower floors, upward, you find tools, weapons and abilities to combat the many enemies you find pacing around the facility. Sometimes, you’ll find written text and audio logs that gradually tell you the story, you eventually find out that you were the leader of a science team, researching an element found in a meteor; called Fumium, this element is ascertained to have various uses, eventually however, you find evidence that the element has been corrupting the scientists and their research leader, your character’s wife, who begins experimenting on her fellow scientists. It’s up to you to delve into the mystery of the facility, uncover its secrets, unlock your memories and survive the onslaught and put an end to it all. 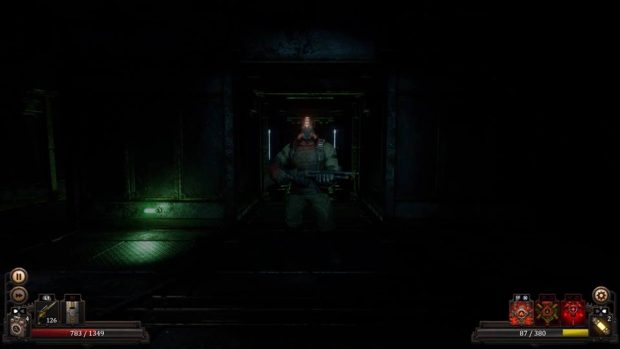 I’m still pretty new to the dungeon crawler biz, so I’m not familiar with the mechanics of most, my most recent experience was the severely lacking Crimson Keep, which (and I normally don’t like being so crude) was utter garbage, *ahem* moving on. Vaporum is a tile based dungeon crawler, all the aspects of the game draw on this grid format, attacks are based on tile distance, rifles and handguns attack two or more tiles in front of you, shotguns a cone of tiles in front of you, abilities can vary between tiles in a straight line or a tile radius and melee weapons are pretty much always going to be the tile directly in front of you.

I actually found the grid based system both great and a little tricky to master, controls are singular inputs, movements are one tile each input in cardinal directions. I’m used to a much more fluid motion however, so I’d frequently find that I would rotate my direction too far, which was a bit frustrating early on. After a little while playing the game and fully adjusting, I found there were many ways to exploit this tile layout against enemies, as one could force enemies to engage you from advantageous positions or even force them into a loop of regaining position to engage you. I also found the AI in the game to be quite smart

The abilities themselves, while relatively weak in early game, are unique and fun to use, gradually getting stronger as you progress through the game, to become critical tools in your arsenal, melee weapons start off being the trusty old pals we’re used to, however missing a strike is pretty common, especially with the tougher foes later in game. In the end I found that handguns suited me best, they seemed to have the best hit ratio and when paired with a shield, meant you could go toe to toe with foes up close and from range where some of your abilities are best used.

Before combat begins, you’re given the choice of three rigs, each focusing on a particular style of play. Combat; focusing on melee and ranged damage, with bonus in offense and defense on direct attacks. Thauma; specialising in gadget power, regeneration, cooldown speed and durations and Heavy; focusing on defense and health. As a beginner I chose to go with heavy to get the best defense early on in the game. As you level and progress you can still dabble in all three rig styles with various pieces of armors, these can grant you special bonus in any of the three combat styles, but the core of your focus will remain unchanged.

As you progress through the levels weapons and armour naturally get better but there are also a number of unique gear you can find, by locating secrets on each floor. These secrets aren’t easy to find however, as buttons are well hidden amongst the same repetitive walls and support beams, but when you do, you’re rewarded with precious loot that helps combat immensely and even some secret dialogues too. 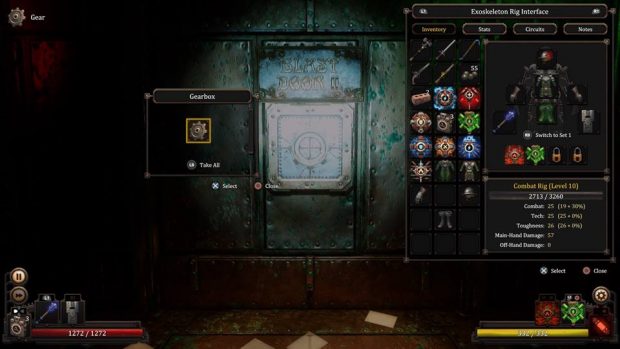 Graphically the game is great, very rough around the edges for the most part, the game pulls off the steampunk genre well, with pipes, gears, cranks and pistons everywhere. Enemy humanoids in industrial era armour, styled like old school deep sea diving suits, hell even the weird creatures roaming the various floors pull off the steampunk look. Some floors are neater than others, showing their more advanced facade, whilst others hide the damage dealt to the facility poorly.

The grid style layout of the game works in the designs favour too, in that it’s allowed for more detail to be used with fewer moving parts, something that would have undoubtedly been a blessing on the overall budget. Abilities have unique animations which is sweet, poison affecting a 1 block radius around the player, lightning too much the same, fire affecting a set number of blocks in a straight line, it’s animations that have been done before, in other games sure, but seeing it done this way was very different to things I’ve played in the past. I also liked the kind of suspenseful thriller aspect, of which the colour scheme and lighting plays into pretty well too, I have an issue with some of it’s implementations though, which I’ll get into below.

Audio loses a point or two here though, the music is decent and sound effects are okay, but they’re a bit bland if I may say. Their quality too, leaves a bit to be desired. The voice acting is pretty terrible I must say, voice lines of the main character are monotone and emotionless and his wife just sounds like she’s faking it the whole time, as tho she expects you to believe she’s a psychotic murderer when she forces out a laugh comparable to Tidus’ laugh in FFX. There’s not a whole lot more I can say about the audio because for the most part it’s simply repetitive, to the point you be even notice it’s there.

If there was any major gripes that I had with both it kinda culminated one hallway, I was thoroughly enjoying the almost suspenseful thriller the game was trying to be up to this point, but I’ll try and paint a picture. See there’s this corridor, as you approach it the lights dim, turn the corner and only the tile in front of you is visible, the rest is pitch black, alright so the game is kicking it up a notch, take a step forward, the screen dims a bit more and the music changes from a dull ominous hum to a sort of, zombie like groaning, alright sweet what’s going to jump scare me here, another step and the sound is almost deafening and the screen is totally pitch black, nothing happening yet, pause menu shows the map is unavailable, perfect, now your senses are at their highest edge, take another step, nothing, just more corridor.

You check the map only to find you’ve been turned around back down the same corridor from whence you came, try again, same scenario, but eventually you learn to go halfway and back track without turning, wallah! You figured out a lackluster puzzle that could’ve been the best and highest thriller experience in the game. It’s built up your excitement, you hair stands on end, shivers run down your spine in expectation, in anticipation and nothing happens. It was the biggest let down of the game and it made any and all thriller moments in the game before and after, practically redundant because I’d been let down from what could’ve been hands down the best part of the game. 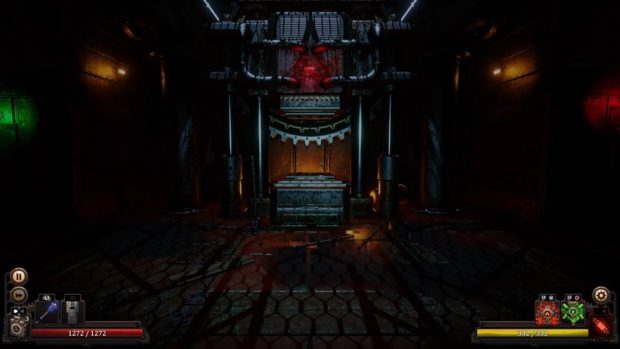 Vaporum is good, I was honestly pleasantly surprised at how good it was. It’s not perfect, but nothing ever is, elements of greatness were there and some weren’t capitalised on. Most importantly the game has heart. The devs had the passion and it shows in the design and execution of the game. With a few blaring red x’s on things that could very well have been better but simply weren’t maybe on account of time or budget but they don’t take too much away from the overall experience of the game which is fun and addictive. It isn’t normally my style of game but even I was hard pressed to put the controller down at times, some of those nights being work nights. If dungeon crawlers are your thing, buy this game, if steampunk is your thing, buy this game, if both are your thing, buy this game. At $30 rounded up it’s a pretty decent price, for a pretty decent game. Or, play it smart and wait for a Steam or PSN sale and it become absolutely worth it.

*Footage use is from my own playthrough*