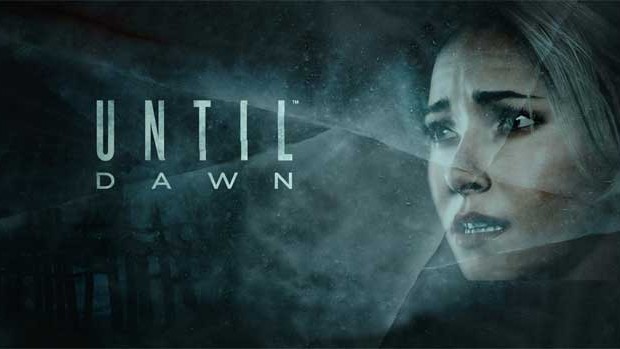 Summary: Until Dawn succeeds on so many levels of story telling and creates this amazing interactive survival horror experience.

After several years of development, Until Dawn is finally available for gamers as they are taken on an immersive journey that has parallels to those teen horrors set in a remote cabin in some unknown wilderness. At its core, Until Dawn is a survival game that is heavily dictated by player choice which means it focuses more on story opposed to gameplay, although there are some brilliant action scenes along the way. 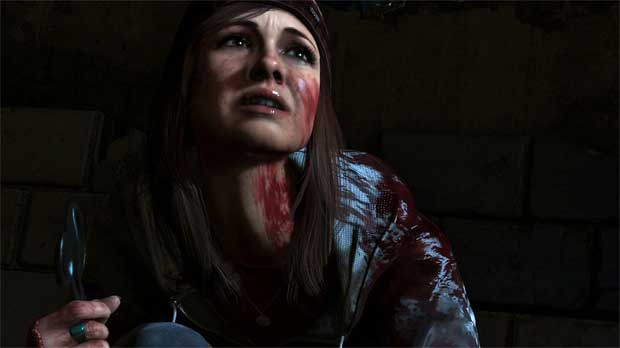 However the biggest selling point of Until Dawn is the inclusion of the butterfly effect which means player choice determines the various pathways of how the game can be finished which causes ripple effects. In other words, the title can be finished in a variety of different ways and really creates this emotional experience on the PlayStation 4 which leads to the question… can you save everyone?

Another highlight of Until Dawn are the amazing graphics that really makes this game a triple A title with its realistic graphics and carefully crafted environments which really adds to the overall atmosphere of both the game and the story. The characters also look like real people thanks to the photorealistic graphics that really helps in getting drawn into this title. They are also based on real actors like Hayden Panettiere (Heroes). 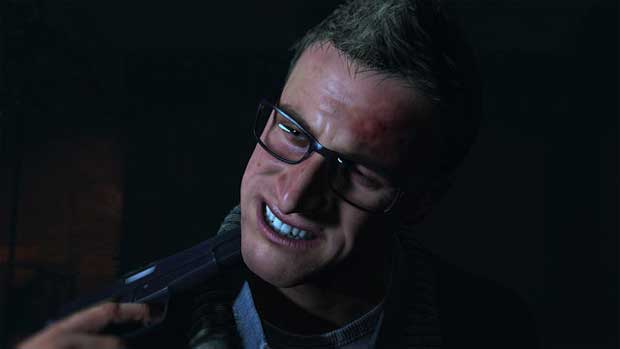 In terms of story and without spoiling the plot, players get to control eight friends who are trapped on a remote mountain retreat but unfortunately they are not alone and whether they can survive till dawn is up to the decisions that the player makes. It also has parallels to the Saw and Scream franchise but thankfully Until Dawn is its own entity.

Similar to other games of player choice (e.g. The Walking Dead or Game of Thrones from Telltale Games), Until Dawn is equally as gripping and really adds to the tension of the storytelling in this survival horror. The title was also written by Larry Fessenden (I Sell the Dead) and Graham Reznick (Stake Land) who are no strangers to scaring people and needless to say, you’ll be scared on many occasions while playing Until Dawn… sometimes even making you jump out of your seat. 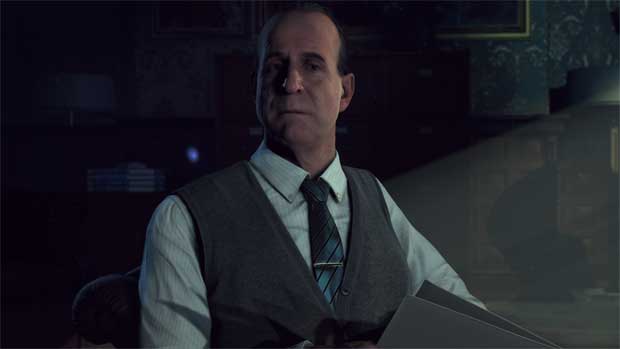 So what does the butterfly effect really do in Until Dawn? Like the popular film of the same name, player choice determines how some of the pathways will play out, so your decisions will cause a ripple effect somewhere else in the game’s timeline. This makes playing the game quite a challenge because you never know how your actions or dialogue choices will effect the story at another point in the game.

With that said and as a word of advice to some players, be careful which of your friends you alienate because you never know when you might need a friend or two as the game progresses. Furthermore, some of your choices can have devastating effects which can also be quite gruesome at the same time and is like beng part of some teen horror film as you attempt to not only save yourself but also those close to you. 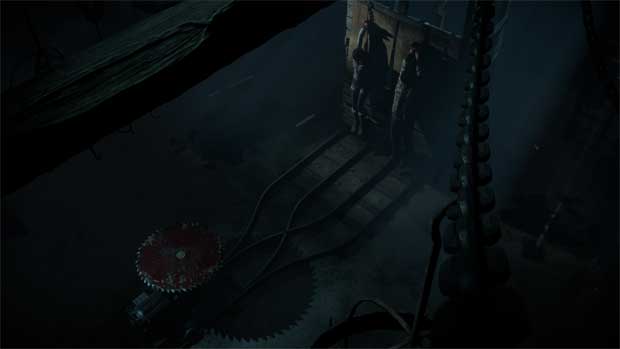 Sure some of the storytelling is a little shallow and clichéd, especially some of the characters but that’s what this genre is all about and it won’t take you long to find your favourite virtual people in the game. Needless to say, even the a-holes in the game are characters that you can’t help but like and try to do everything you can to save them.

The gameplay of Until Dawn does allow curious players to investigate the mystery behind this game but if you explore even more, you may find these special objects that disclose how certain characters may die through visions. Although the fates may have dictated how a character will die, the player can twist reality through the ripples of the butterfly effect. 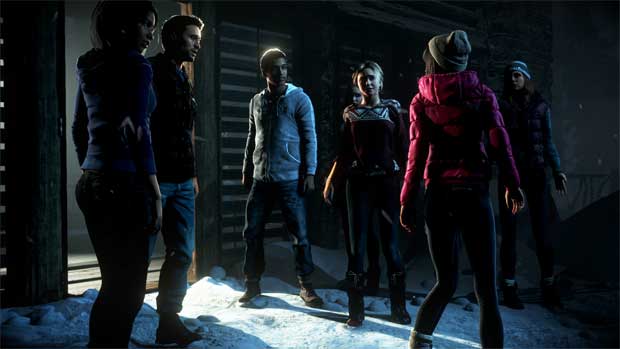 Then you have quick-time events and developers Supermassive should be commended on creating some of the most nerve racking and frightful use of this gaming medium. I also like how this developer has implemented a very clever “don’t move” prompt which requires the player to hold the controller very still in order to hide from the reason why these eight friends are in the predicament they are in. 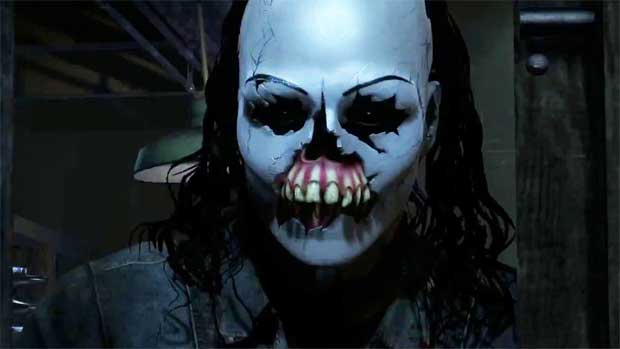 In terms of completion, this game can also be finished in around 10 to 12 hours, however as you can change how events play out in Until Dawn, you could easily play the game another couple of times and best of all, there’s plenty of unexpected twists a second time around.

Graphically, Until Dawn is an amazing looking game on the PS4 and developers Supermassive have done an excellent job at creating this interactive world with some realistic visuals thanks to the Killzone Shadow Fall engine. Lighting also plays a key role to the gameplay and when matched with the realistic characters and unpredictability of the gameplay, you have a true winner on your hands.

I really enjoyed how Fessenden and Reznick give the game this teen horror feel to it with not just the story but also the visuals that is as close as most of us mere mortals will get to starring and directing their own horror film. Audio is equally as good, especially the professional voice acting (such as Hayden Panattiere, Peter Stormae (Fargo) plus the haunting soundtrack that works hand in hand with the gameplay and storytelling. 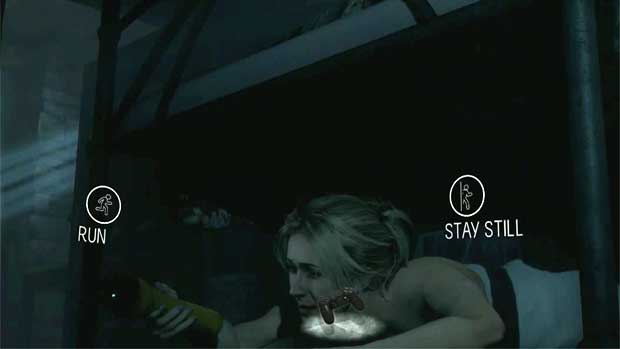 Until Dawn may have gone through some development problems and lengthy delays but after completing this title twice, I can safely say that the wait was worth it. It’s also one of those games that heavily focuses on storytelling and even though the gamplay does take a back seat, the interactive plot is equally as satisfying. All in all, Until Dawn puts the player into the world the unknown which makes your choices a very hard chore that will leave you with mixed emotions when you “think” you’ve made the wrong decision. Until Dawn is the perfect interactive medium on the PlayStation 4 that succeeds at drawing you into your own personal horror story.