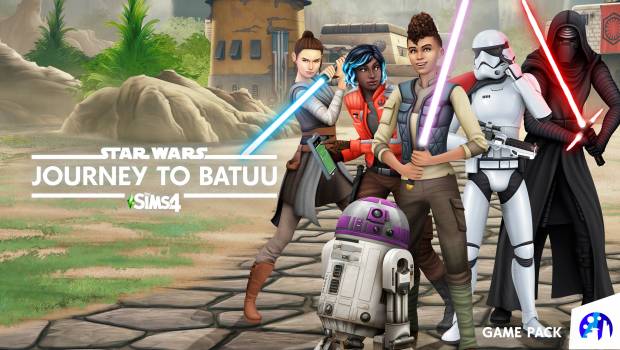 Summary: The Sims 4 Star Wars: Journey to Batuu is an excellent addition to The Sims 4 universe and a must-play for any fan of both Star Wars and The Sims.

Let’s be real here, ever since EA got the go-ahead from Disney to cover the video game side of the Star Wars franchise, I’ve been waiting for the Sims to get a chance to go a little nutty with it. I dreamed of a Star Wars expansion where I would be able to create a family of Ewoks and build them a tree house on Endor, then fabricate a love triangle between my Wookie neighbours. It seems EA had a different direction in mind for what they wanted to do once approval came through to cross The Sims 4 with the Star Wars universe, and while the latest Sims 4 game pack, Journey to Batuu, doesn’t exactly provide the Star Wars ‘slice of life’ gameplay that I was hoping for, it does offer an exceptionally enjoyable Star Wars adventure that you can experience with your beloved Sim family. 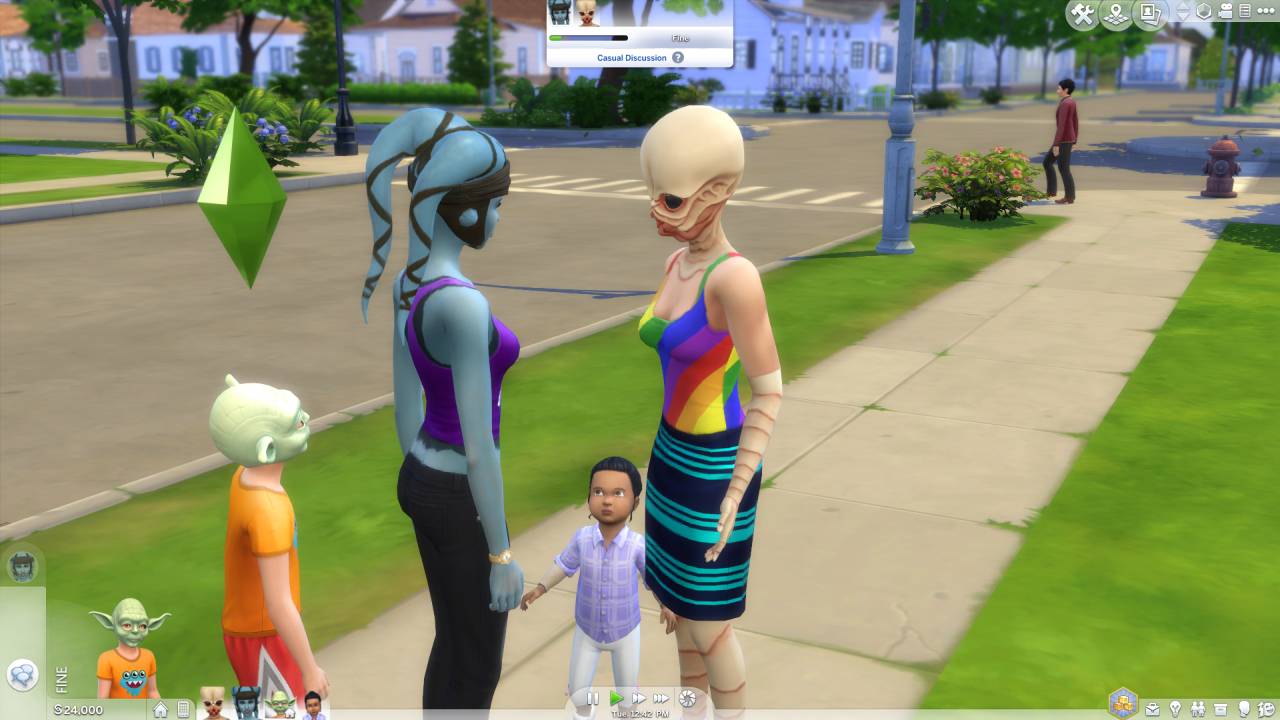 The Sims 4 Star Wars: Journey to Batuu is a game pack for The Sims 4 that is a little different to the traditional model of what would typically be included in a Sims 4 ‘game pack’. If you’re confused about the terminology, here’s a quick rundown: ‘expansion packs’ are the most expensive type of add-on to the base game of The Sims 4 and typically have the most content included, usually in the form of new game modes or gameplay systems (see the Eco Lifestyle expansion that we recently covered). ‘Stuff packs’ are the cheapest form of addon and usually include new objects or fashion items with their own gameplay mechanics (such as the Tiny Living pack). ‘Game packs’ strike the balance between the two with significant new events and items to play around with, but not as extensive in scope as an ‘expansion pack’. 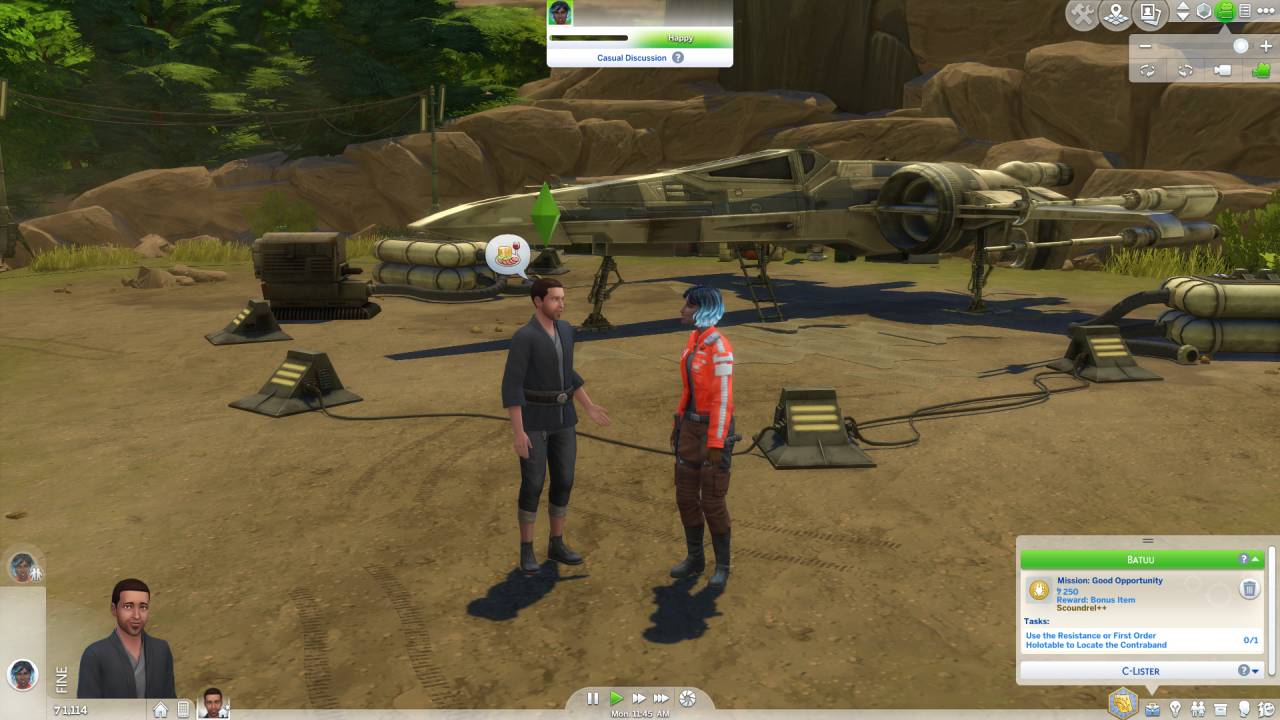 Journey to Batuu further sidesteps these expectations for what we’ve typically seen in a Sims 4 game pack and plays somewhat like a Sims 4 spinoff game set in the Star Wars universe. After activating the game pack, your Sim will receive a notification on their phone to travel to Batuu for an adventure. Upon accepting the invitation, your Sim will be promptly transported to a galaxy far, far away, leaving behind all their earthly sim-possessions, including their bank balance and regular attire. 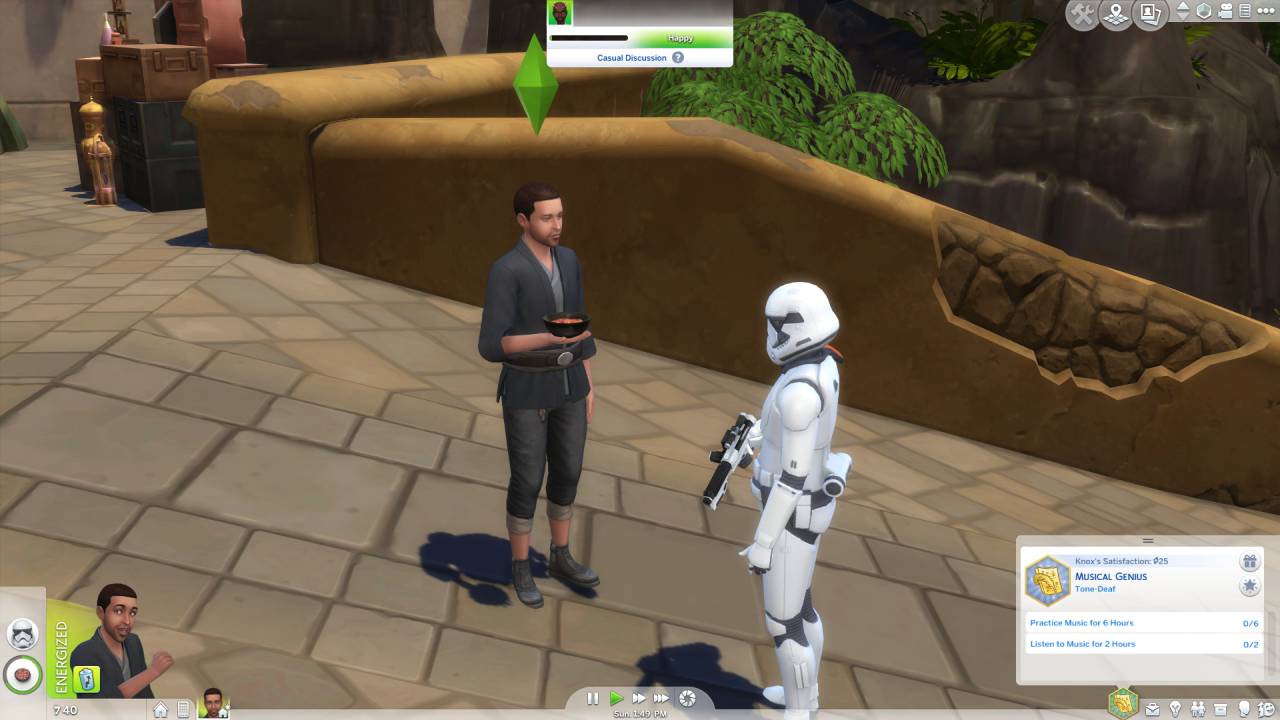 When you first arrive in Batuu you’ll find yourself in Black Spire Outpost, a town on the Galaxy’s Edge (modelled after the Disneyland theme park) where regular galactic citizens try to go about their lives among the overbearing First Order officers, while rebel spies hide in plain sight and smugglers meet in secret. Here you’ll be given a small list of tasks to complete, which serve as a light tutorial as to how things work in The Sims Star Wars universe. You’ll be shown that a Sim’s basic needs such as hygiene and sleep can be satisfied in your assigned dwelling (which is where you can also pick your new outfit) and hunger can be appeased by purchasing food from the local alien gourmand. 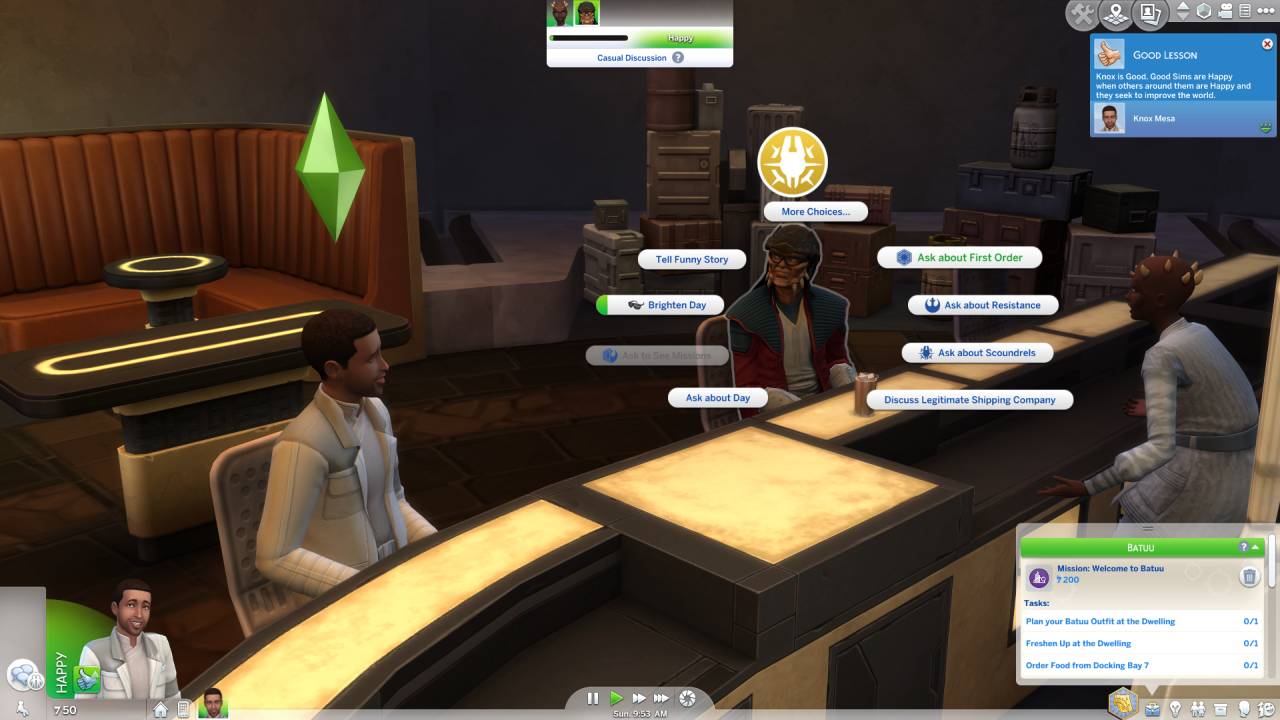 You’ll also be required to chat to Hondo Ohnaka (whom you might recognise from the Clone Wars animated series) who will introduce you to the basics of completing quests and the benefits of gaining reputation with factions. After arriving in Blackspire Outpost, you’ll quickly find yourself caught up in the war between the First Order and the Resistance – but which side you choose to join is up to you. If you’re feeling righteous, you can travel to the nearby Resistance Encampment hidden within a forest enclave outside of town where you can help the people rise up against the First Order. But if the allure of the dark side is too strong, you’ll find an enlistment officer in the First Order District that will quickly put you to work spreading propaganda amongst the Batuu citizens. Or if you’re simply feeling opportunistic and don’t really want to take sides, you can always join Hondo Ohnaka and the Smugglers to make a tidy profit by completing a variety of nefarious deeds. 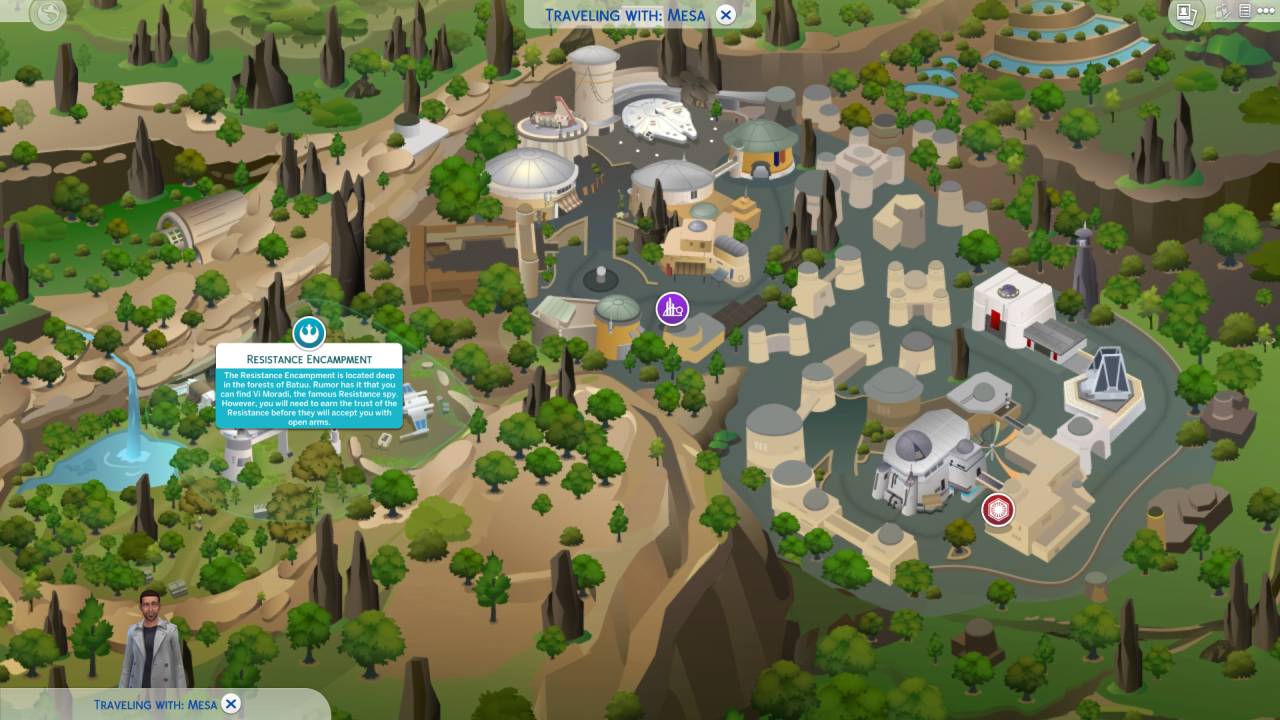 Quests can range from simply travelling to one area, collecting an item and returning it to its owner, through to more complex multi-faceted objectives such as acquiring information from within a certain faction. Completing quests will improve your standing within the factions, which will open up further opportunities for you to explore Batuu and meet some familiar faces. The quests are good fun and not always as simple as one might expect – it’s interesting to use The Sims 4 game mechanics to achieve your desired goal. For example, you may need to improve your relationship with a character in order for them to trust you before you can gain information from them, or you may need a sufficient mechanical skill level in order to hack into certain devices. 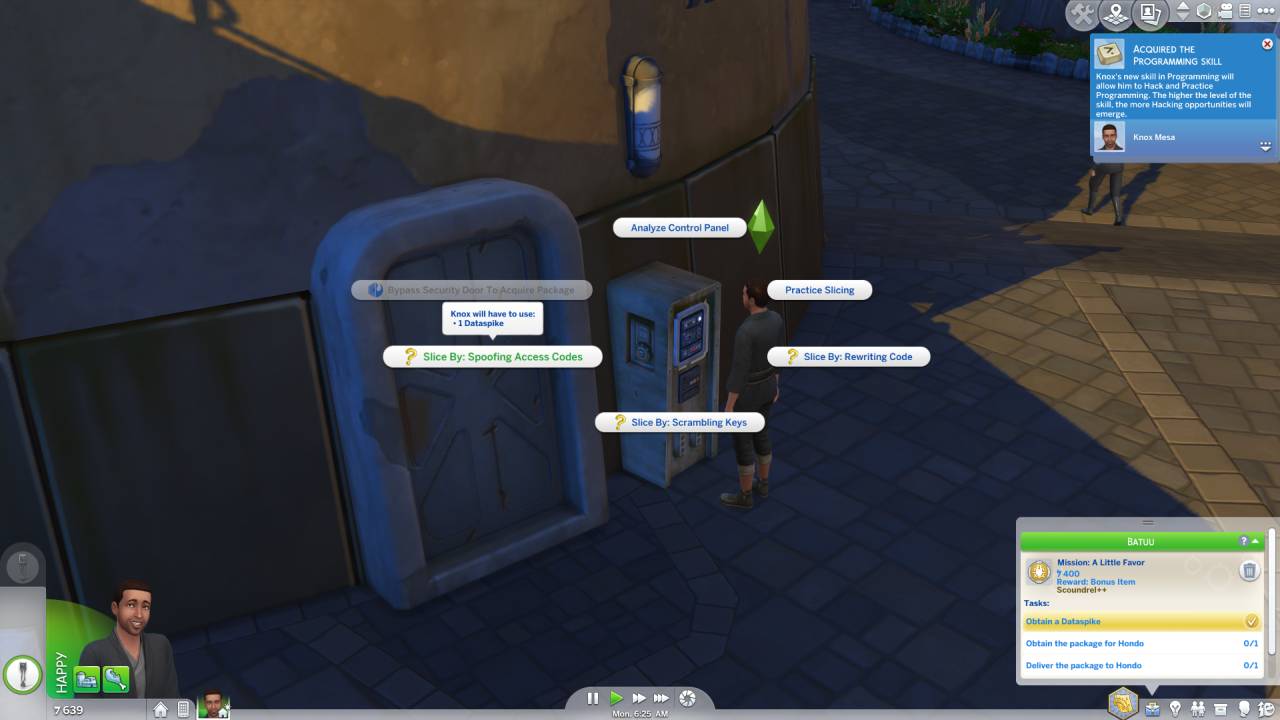 But perhaps you’re not into the idea of running errands for the empire or trotting about town for a bunch of smugglers – maybe you just want a stress-free Star Wars holiday for your Sim family with some fun souvenirs to take back with you? Your Journey to Batuu need not be aiding some war effort for a faction you have no affection towards, there’s plenty to do around Batuu that doesn’t involve questing. You can build your own lightsaber and collect new hilt pieces by exploring the world. You can buy and customise your very own R2 or BB droid. Or you could simply spend your days partying in the Cantina and gambling for galactic credits. I had just as much fun exploring the world of Batuu on my own time as I did completing quests and tasks for the various factions. 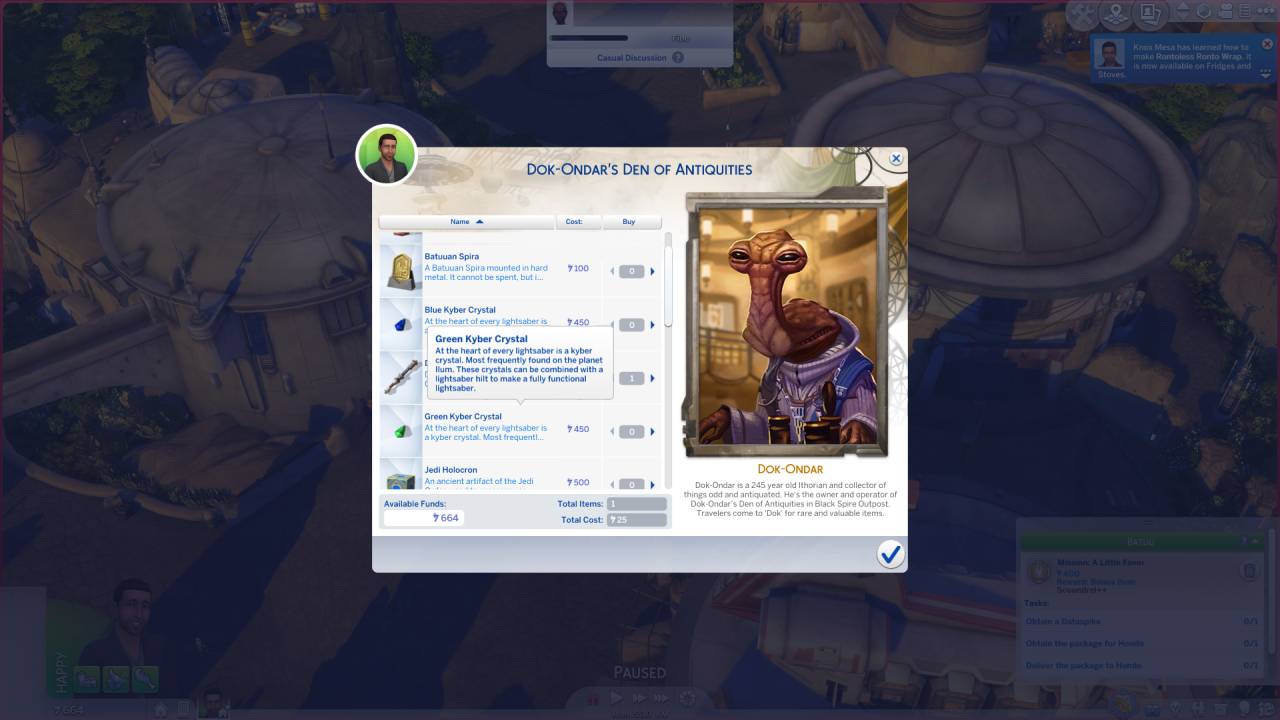 The Sims 4: Journey to Batuu is an excellent addition to The Sims 4 and is absolutely worth the cost of entry if you find yourself in the middle of the venn diagram of fandoms for both Star Wars and The Sims 4. With three different faction questlines and multiple areas to explore, there’s plenty of story-based content to play through. But if faction quests aren’t your thing, Batuu is still an excellently designed world that is bursting with things to do and places to explore. There’s also a tonne of decor styles and clothing that you can use to give your Sim’s life a little Star Wars flavour. While you may not be able to build a treehouse for a family of Ewoks, Journey to Batuu has enough Star Wars-themed goodness that a little imagination and creativity can get you excitingly close. 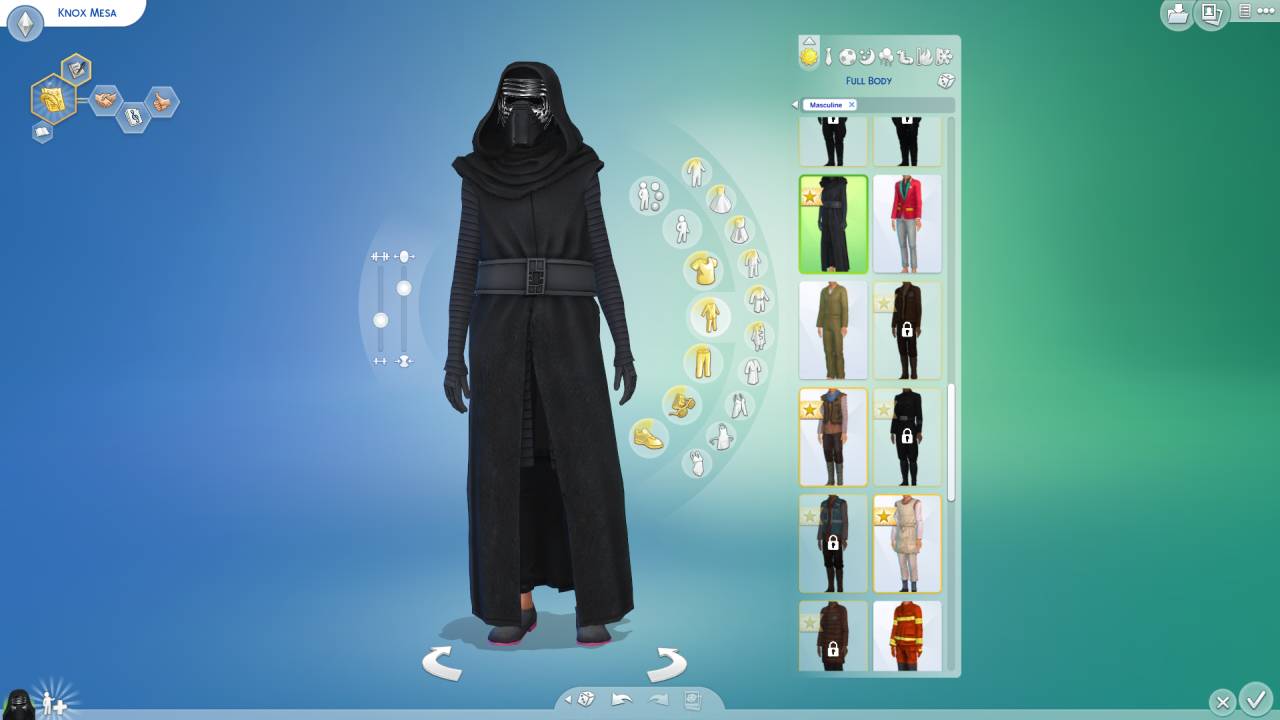 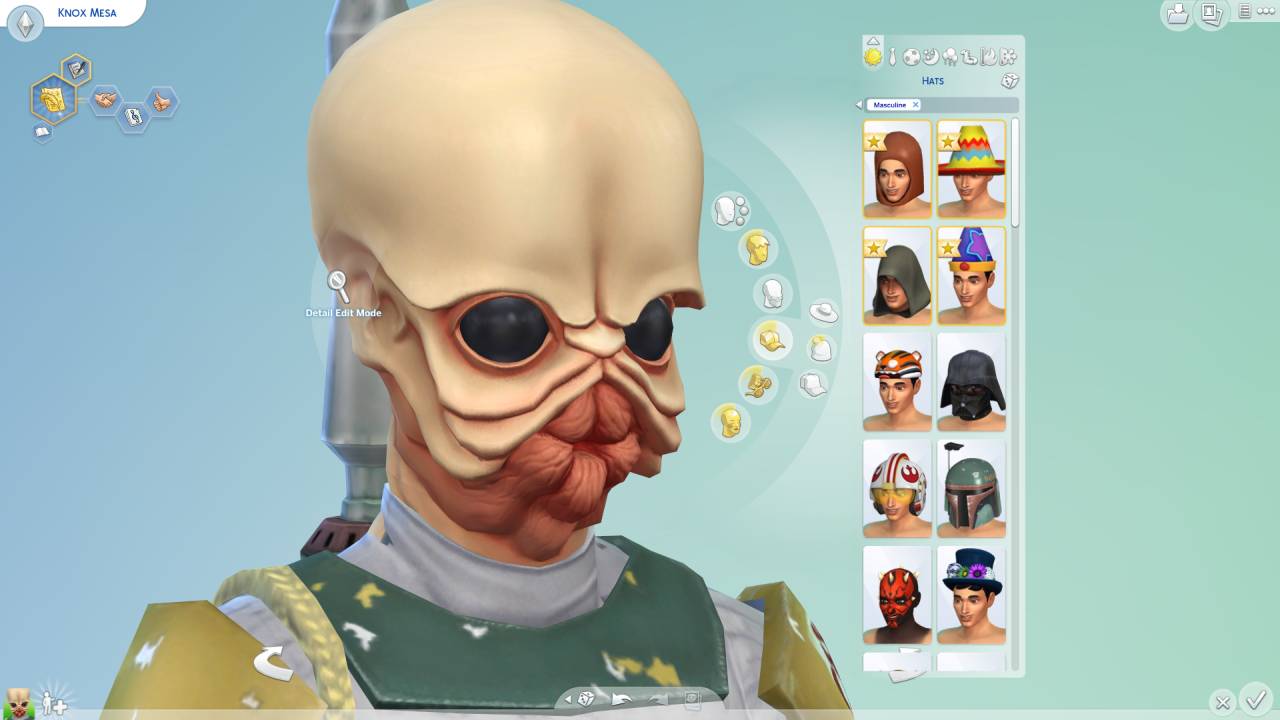