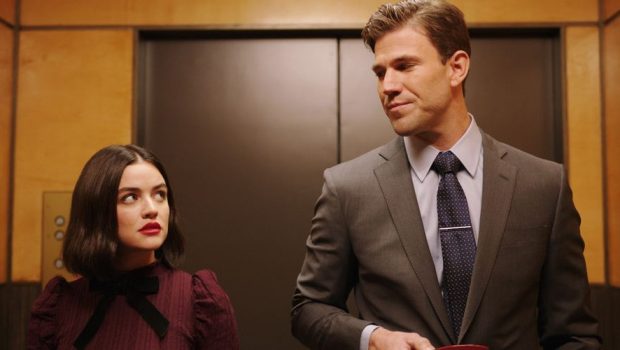 Summary: A work enemies-turned-lovers rom-com that doesn’t really fly. Enjoy the view because this one ultimately lacks heart.

“The Hating Game” is a rom-com that lives up to its name. It is a battle of the sexes where two very different individuals wind up falling in love at work. The result is a rather pleasant slice of escapism but it doesn’t feel like an authentic reality.

Peter Hutchings directs this film. It is adapted from a best-selling novel from Sally Thorne. Lucy Hale stars as Lucy Hutton, a warm and quirky girl who works at a newly-merged publishing house called Bexley and Gamin.  Each day she sits at a desk across from her nemesis, an uber-corporate control freak named Joshua Templeman (the gorgeous, Austin Stowell). The pair of actors are lacking in chemistry despite previously appearing together in the film “Fantasy Island.”

This rom-com is a little long and could have been edited down a bit. Both Hale and Templeman are vying for the same job as managing director despite them both carrying the publishing house. This leads to a lot of gaslighting and manipulation. It requires a suspension of disbelief to have such a quick shift in perspectives- one minute they are on the verge of killing each other and it feels like in the next scene Templeman I declaring his undying love for the gal he calls, “Short Cake.”

There are subplots involving Templeman’s father taking a dislike to his son’s chosen profession and Templeman’s brother marrying a former flame. This feels unresolved and a little tacked on. Another scene involves  a strange one involving a hotel employee that almost wants to feel like a second-rate episode of “Fawlty Towers.”

“The Hating Game” is a film that ultimately lacks heart. While some viewers may find this a nice distraction and the games of will they, won’t they? Others will question the script writing and the authenticity of this romance. In the end you can enjoy the view but don’t expect to feel anything substantial.