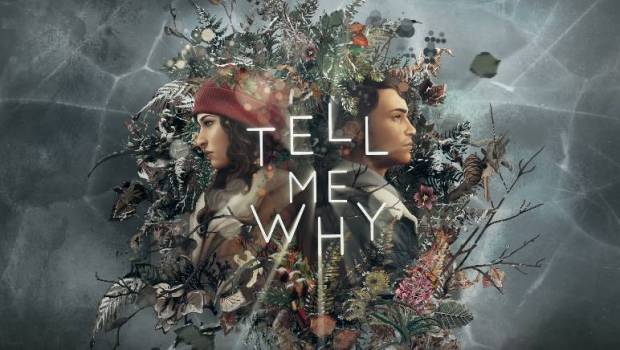 Tell Me Why XBox One Review

Summary: Woke, but not broke. A great implementation of the first playable trans character in gaming; but overall, a really good story!

Tell Me Why is a highly immersive RPG adventure that deals with serious subject matters; twin girls whom experience the shocking and traumatising death of their mother at a young age, whilst one of the girls, Ollie begins to transition to male.

Following the adult identical twins, Tyler and his sister Alyson first reunion after being separated for around seven years as a consequence of their mothers death, leads the awkward duo back to the original Ronan family lake-side home in Delos Crossing. 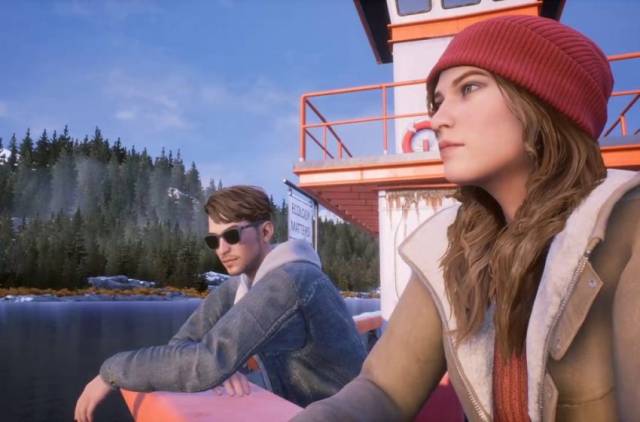 Tyler and Alyson’s first awkward conversation onboard the ferry

The family home is still furnished and left untouched for years and the twins agreed to clean out the home and sell it to start their lives over again. However emotions run high between the pair whom must not only face the overgrown state of the home, but face the flooding of old memories that start resurfacing as a result of being reunited in their family home. 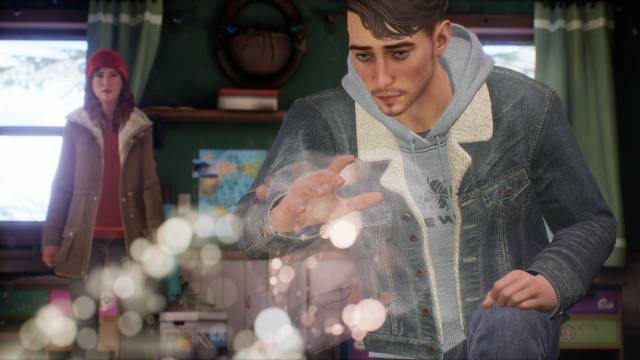 Tyler vividly remembering the past

The twins re-live the events leading up to their mothers death and retrace their steps looking for clues to fill the gaps in their memory and make sense of the situation, so that they can be unencumbered and move on with their lives.

The active character transitions throughout the game between Tyler and Alyson at different stages of progression. For the majority of the game, Alyson and Tyler are together and interact with each other and the environment respectively.

As twins, Alyson and Tyler have a unique gift of ‘the voice’, which they developed in their childhood. A form of telepathic communication between the two, allows them to talk non-verbally, which is put to good use when there is a need to communicate covertly in mixed company.

The twins are able to recall their own significant memories when in close proximity to specific locations, which will make the controller vibrate and some visual on screen distortion noticeable in the direction of the memory. Activating the memories reveals the twins Alyson and Ollie, or other characters reliving the past event as it happened. 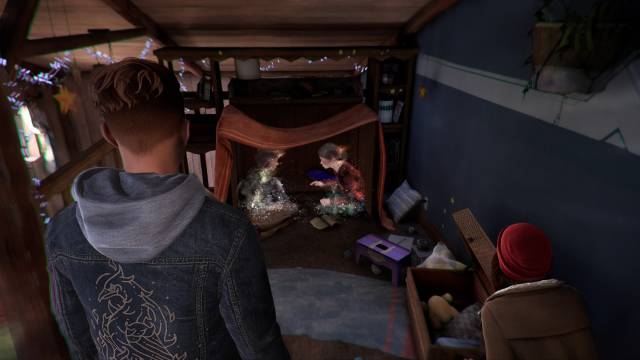 The characters have a partial freedom to roam anywhere within the loaded scene and can interact with many items, indicated by a small circle when nearby. There are a lot of back story element items such as photos and newspapers that cause some interesting dialog between the two but do not directly form essential parts of the story.

As the twins learn more about their mother, they have to put their detective hat on and solve problems, such as mechanical puzzles, logical connections and difference between two memories. Interestingly, some problems such as how a door or lock is opened or a preferred memory presents a possible decision that can change the story, or indeed influence the gamer’s decisions which impact and shape the story.

The graphics are a mix of high quality textured realism, especially for the characters, and smaller low resolution and representative 2D objects which are used for photographs, posters, flyers and the like. 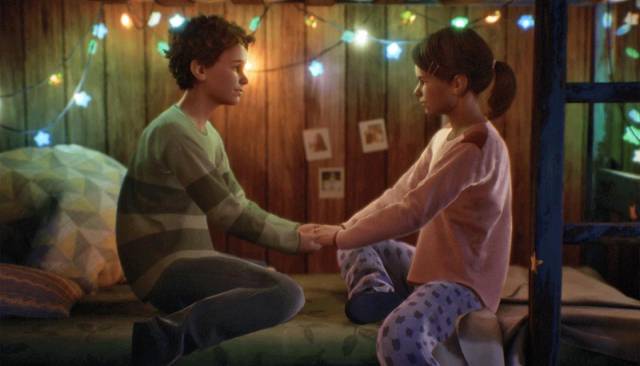 It may be the case that some textures and elements may render even better on a high end PC graphics card, however on the XBOX they are superb and the blending of the 3D and 2D textures focuses the eye on the important details and generates an immersive experience that instinctively allows the gamer to focus on the game and not minute and useless minutia.

The background sounds in this game are really well done. At times birds can be heard, floors creaking and doors opening, which are all delightful. The voice acting of all characters is really well done, although there are moments where the character “Tom” feels more removed from reality and more cartoon, however that is but one Australian ear hearing what is perhaps likely to be a regional accent and nothing more.

There were some issues with the audio however, which all related to the depth of field. Sometimes dialog was completely inaudible unless the character was facing the direction of the sound – which was not always possible due to interaction or being upstairs in the home when you are being spoken to from downstairs. This ranged from barely a whisper to no sound with subtitles.

This seems realistic in that the response seemed true to real life responses, however the game dynamics is such that the character will continue to speak to you and interact with things and continue to speak whilst you walk away. In other words, pre-scripted movement of NPC’s cannot be anticipated and is often triggered when the active character moves or touches something.

The sound is great with surround sound, but this may be one of those XBOX games that will be better to switch your sound system to forced stereo.

This review, trailers and other descriptions would leave most readers and gamers legitimately asking the question, “is this game another ‘woke’ game?” which depending upon a point of view, the answer could be a positive or negative aspect. As it is currently the case, many titles released recently have some element of political driven ‘wokeness’ that push some form of agenda onto the gamer, typically in a very forced, contrite and obvious way, which often has the adverse effect than intended, and ultimately it ruins the experience for most gamers.

The inclusion of a Ollie/Tyler as a trans character has been written as such, that Ollie as a trans child is pivotal to the story line as it is closely related to aspects of the death of the twins mother, and the motivations of some of the actions of the towns people at the time. It further underpins some of the basis for conflict between the twins, although indirectly.

The focus on the twins is uneven, favouring more character development into Tyler and his transition story; however there is also a reasonable argument for this as it also forms a part of the story with respect to the events. With that being said, there is a romantic scene for Tyler that is exclusive to him alone and is both forced and unnecessary to the main story; if it was removed it would still be a great story in and of itself.

The romantic scene is no real spoiler either, it is expected and anticipated by the animated exchanges between Tyler and the other character, and during the pre-emptive flirt scene, there is no possibility to avoid the lead up, it has to occur in order to move the game forward. The actual physical contact later however is left to a choice of the gamer, which is a good thing.

Tyler’s interactions with all of the NPC’s has some form of trans-related dialog, either recognition, or babbling awkwardness. Given that the NPC’s are all known to Tyler as a child, and that they are all known to Alyson, the responses are realistic and totally within expectations. 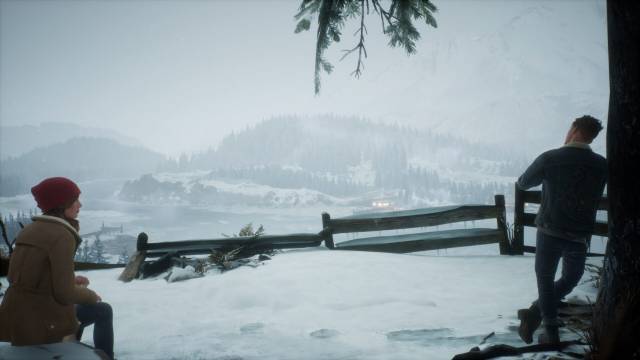 It is also important to note that Tyler is perhaps the very first playable trans character in any game, and is also voiced by August Aiden Black, incidentally a great performance, it must be said that this game breaks new ground in this aspect.

All of this leads up to stating that the story’s main focus is on the twins and their mothers death, but the secondary focus is predominately of Tyler and his transition, so much so that the a significant portion of dialogue between Alyson and Tyler is about Tyler’s feelings, transition and his journey and struggles. However; again this has been written in such a way that it underpins the story as a whole and what would otherwise in any other situation be a forced inclusion of mind-numbing ‘trans-wokeness’, is actually purposeful and informing the main story-line.

Based on all these things, it would be reasonable to conclude that this game contains woke agenda by design. It is clear and obvious that this game has been designed and written in such a way as to provide a trans character and story that people can identify with and to perhaps educate in broad strokes, of some of the struggles of transitioning. However ultimately, gamers just want a good story without being preached to or having agendas forced upon them and in this case, Tell Me Why is indeed a really good story in its own right.

As there are many decisions throughout the game that affect the dialogue, interactions and end scene, this game has quite a bit of playability, despite being able to complete all three chapters comfortably over the weekend.

Despite some obvious ‘woke’ elements, this game simply delivers a really good story, breaking ground in the premise and delivery of the memories and the voice between the characters. Overwhelmingly this game is wonderful to play, captivating as a story and highly immersive.

Unfortunately the ending is the weakest part of the game as the epilogue is a lacklustre experience which didn’t really sell the ending; rather seeming rushed and centrally focused on one character.

All things considered, this game and its developers should be applauded for a job well done.

This title was provided for review by Microsoft XBOX. For more information or to address any concerns about this game, you can refer to the FAQ. Note: contains spoilers.