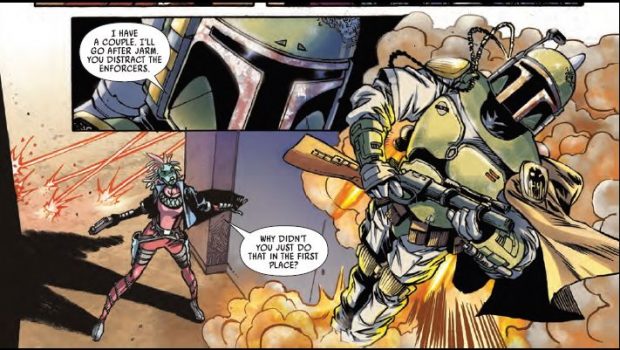 Summary: By no means essential to read, but if you will no doubt end up reading it if you have read all the other series related to the War of the Bounty Hunters storyline.

YOUR MIND POWERS, WILL NOT WORK ON ME BOY!

Even though I openly complained about the existence of this story in a previous review as I said to the author of the story on Twitter I’m going to read it none the less as by this point I am on board with the War of the Bounty Hunters storyline.

As I expected the real focus is not really about Jabba the Hutt as it would just be him sitting around eating things, going HO! HO! HO! Stabbing people in the back. The reason Jabba got so powerful as a lot of people owe him a debt that can’t be paid off via money as they do offer and he refuses. Also he can wait over a hundred years to pay off a debt or when he feels like it.

In this story we follow bounty hunters Deva Lompop and Boba Fett and the story jumps from the current events in the War of the Bounty Hunters, back to “one last job” Deva was asked to do on Tatoonie.

It was an alright story I guess but not really a Jabba the Hutt story as it just ended up being about Boba Fett again. There are a lot of side characters in the Star Wars universe that have not gotten their own story that they could have gone with but I’ll guess this one will do for now.

If you have already read all the War of the Bounty Hunters series plus all the separate character stories then I would recommend this, but it is not really essential to read to understand the main plot.